In the rock/metal community there are a few ways to denote exceptional instrumental prowess, the term “shred” and the phrase “melting faces.” Shred is used to denote a musician (particularly a guitarist) who plays so fast and so precise that they “shred” through the strings. The term “melting faces” refers to this style of playing, in which a guitarist is playing so fast, so precise, and so long that the friction generated from their playing is so hot that faces melt in the audience. Both of these ideas were conceptualized during the explosion of guitar players in the 80s, dubbed shredders for their prodigious talents, these guitarists would release dazzling solo albums composed entirely of guitar instrumentals. 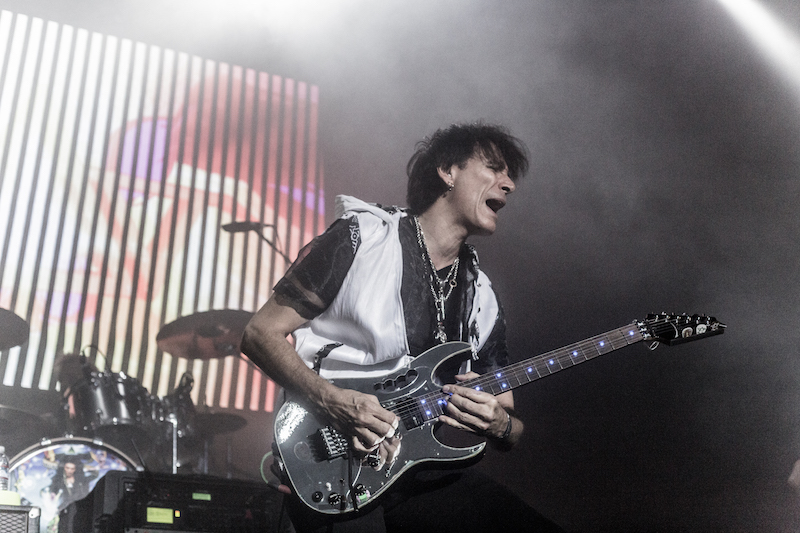 Steve Vai is one of these musicians and one of the most supremely talented of the bunch and he delivered a masterful performance of his genre-defining solo album, Passion and Warfare at the Fillmore. As the lights dimmed a recording of a scene from the classic 80s movie Crossroads began to play in the background as Vai walked out on stage to play one of his incendiary guitar lines from the movie (in which he plays the devil’s guitarist) to a rapturous audience response. After that he led the band into a devastating rendition of Bad Horsie, a song that features all of Vai’s sonic hallmarks: dizzying instrumental acrobatics, abrupt changes in tempo/mood/feel, and plenty of crazy guitar freakouts. Sonically the piece moved from stomping metal to slide blues to avant-garde weirdness and really set the stage for the rest of the night. 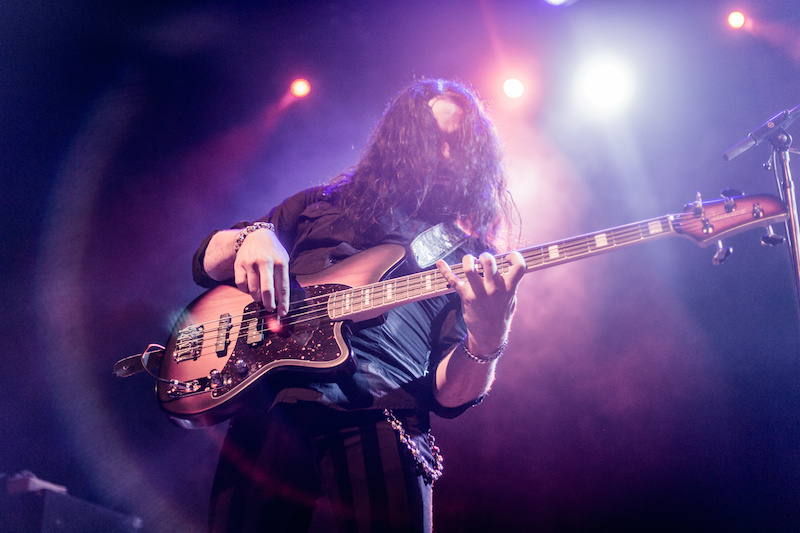 Next up was the astonishing The “Crying Game,” set off by bassist Philip Bynoe’s aggressive slap bass, which queued Vai and second guitarist Dave Weiner to begin playing. Weiner had the near-impossible job of trying to match Vai in both rhythm and lead duties throughout the night, and on this track he absolutely nailed it, having no trouble dishing out insanely fast guitar runs to match Vai, with the two of them even managing to slip in some catchy harmonies along the way. A few songs later Vai gave a brief talk about the album Passion and Warfare before playing its opening track, Liberty. Throughout the course of the next 14 songs, Vai and his band weaved through the album, stretching out plenty of songs to allow for some more incredible guitar performances. The highlight of the night came during the mid-album epic (and best-known song from the record), “For the Love of God.” Over the course of six plus minutes, the piece weaves through dense psychedelic textures, as Vai laid some of the most incendiary guitar playing known to the world, from profound single note licks to blinding flurries of notes, with the track never losing focus or losing interest. 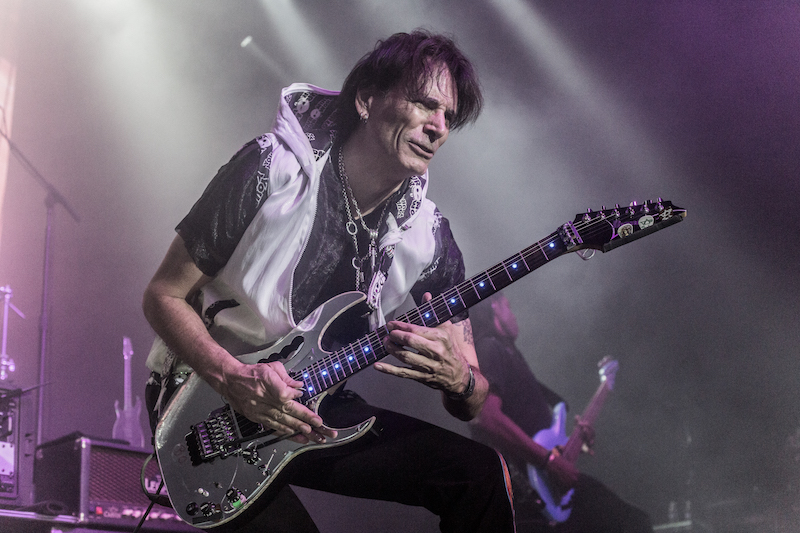 After finishing up the whole album, the band tore through an inspired performance of the Frank Zappa song “Stevie’s Spanking,” a track that Vai had originally played on back when he was in Zappa’s backing band. The piece provided insight into how much of a musical influence Zappa was on the young Vai, as the song’s bizarre tonality and harmony were certainly a precursor of what was to come. 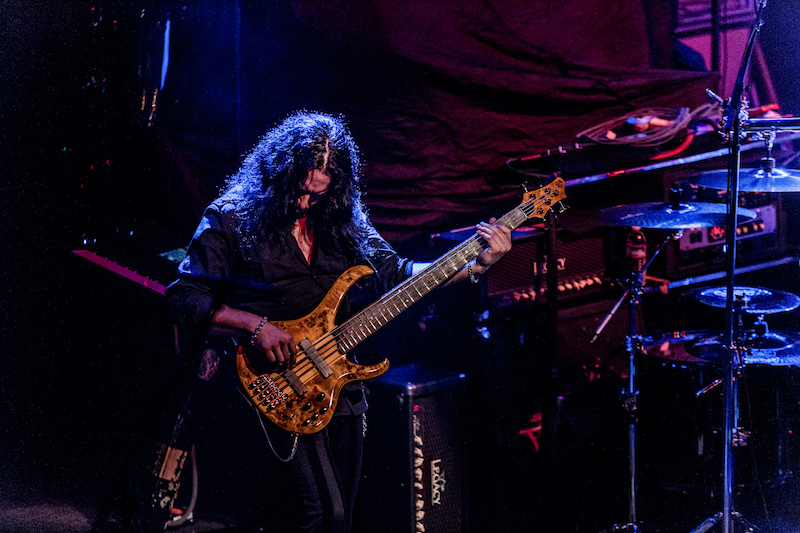 Following this was the most spontaneous moment of the night. Vai called up two audience members and asked them to help him build a song from scratch. The audience members helped construct a drum beat, a bass part, and a guitar part on the spot. Almost instantly Vai jumped in with the band and special guest Jeff Watson (of Night Ranger fame) trading off some wild and unpredictable solos. 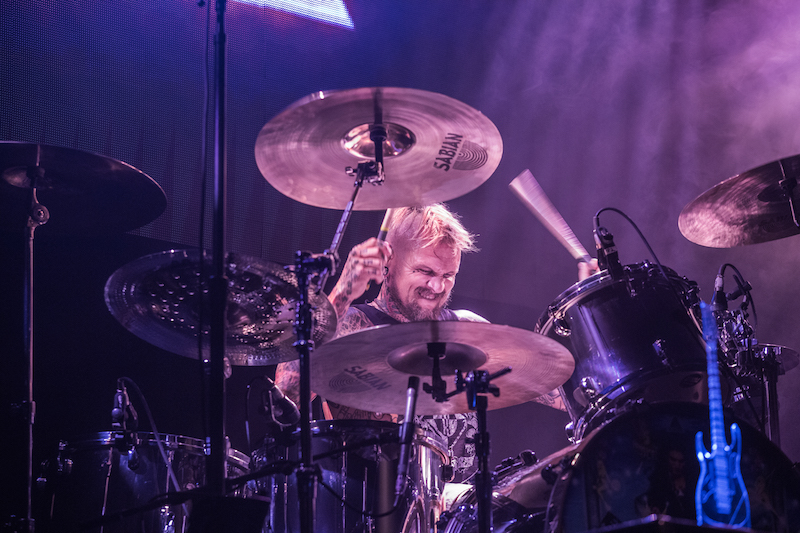 The band closed out the regular set with a rousing rendition of “Racing the World,” which featured drummer Jeremy Colson anchoring the song with his impressive chops, keeping the tension and energy right on the brink as Vai and Weiner once again demonstrated their prodigious talents. 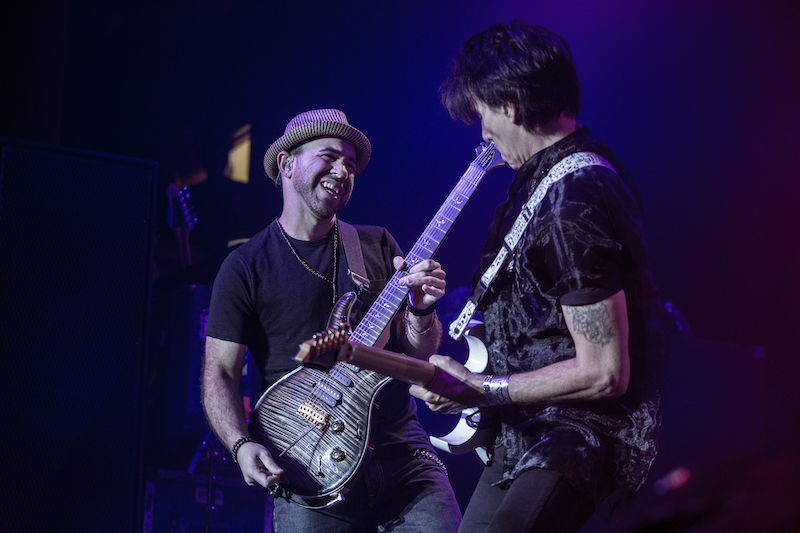 For an encore Vai brought out opener Tony McAlpine to play “Fire Garden Suite IV – Taurus Bulba,” a blistering slab of heavy metal over which Vai and McAlpine tried their hardest to outdo each other. It was a fitting end to a night of astounding music, showing that Vai stands alone as one of the most incredible musicians on the planet, capable of taking any style and making it his own. While some find this type of music self-indulgent, it was hard to not get wrapped up in the enthusiasm emanating from Vai, who seemed overjoyed to be playing these songs. His playing demands and holds your attention throughout, a mark of a true master. 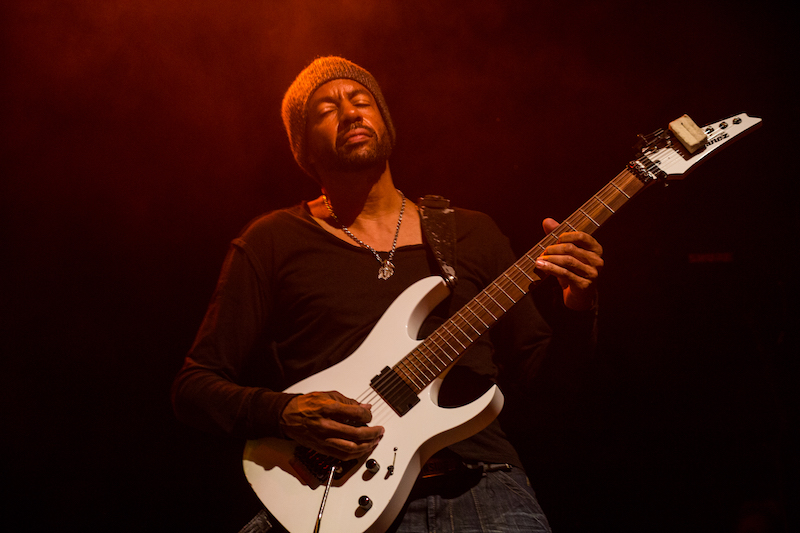 Tony McAlpine opened of the evening with an inspired set that demonstrated his talents on both piano and guitar. McAlpine had no trouble combining hyper-speed runs with gentle piano/keyboard pieces, with a few songs that actually featured him playing both instruments simultaneously.

Find out more about Steve Vai on his website.