Undercover Presents is a local nonprofit whose mission is to connect Bay Area musicians and music lovers by bringing the two communities together in celebration of classic albums, from Bob Marley’s “Exodus” to Black Sabbath’s “Paranoid.” Lyz Luke is the mastermind behind the operation. Although she works with a talented team, she’s carefully crafted a method of orchestrating the event, which routinely sells out. Lyz starts by selecting a music director and then works with them to hand pick local bands representing a diverse array of genres, from bluegrass, to funk, to hip hop, to Balkan brass—and everything in between. The music director’s job is to pair bands with songs from the featured album, among other things. Each band is responsible for reimagining one song. Bands record and eventually perform their song live for the spectacular grand finale! On a February weekend, Undercover Presents brought fifteen bands to the stage to reimagine Lauryn Hill’s “The Miseducation of Lauryn Hill.” 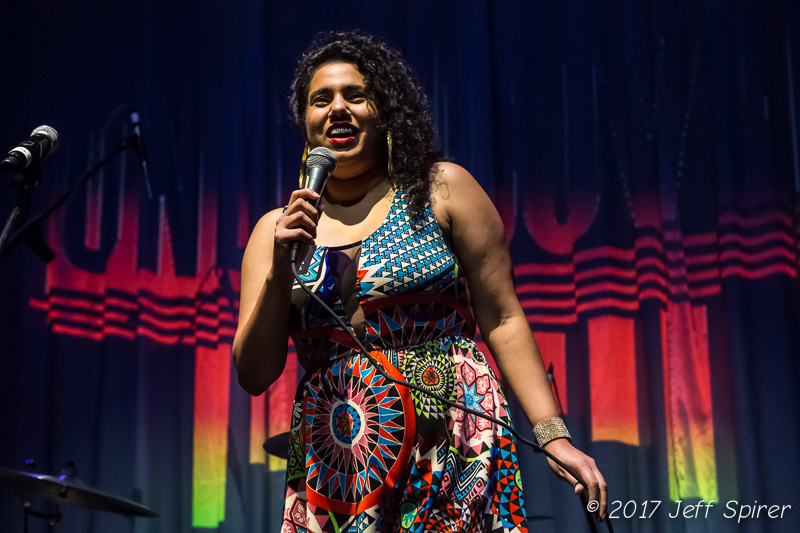 I first found out about Undercover Presents’ latest undertaking via Ethio-Jazz songstress and longtime friend, Meklit Hadero. Meklit informed me that her dream had come true: Undercover would be recreating Lauryn Hill’s groundbreaking project, The Miseducation of Lauryn Hill in collaboration with Yerba Buena Center for the Art’s Clas/sick Hip Hop Festival. Meklit had been tasked with serving as guest music director. She asked if I’d like to be part of the lineup and I couldn’t say no! Part of the reason why I was so excited about being included is that there’s no denying the global impact of Lauryn Hill’s first and only solo album. Not only did the project snag Hill ten Grammy nominations and five awards, including Album of the Year – a feat that no other black woman has been able to accomplish since then – but it also signified a shift in hip hop’s acceptance into the mainstream. It changed lives, notably Hill’s as she was the most lyrically ambitious member of the dynamic crew, The Fugees. The album allowed Hill to step out on her own two, to show off her impeccable vocal and lyrical range as well as her gorgeous face as she later graced the covers of many magazines. And with lyrics seeped in women’s empowerment and social justice topics, The Miseducation of Lauryn Hill also proved it was possible to create music with a message, yet still make a hefty profit. 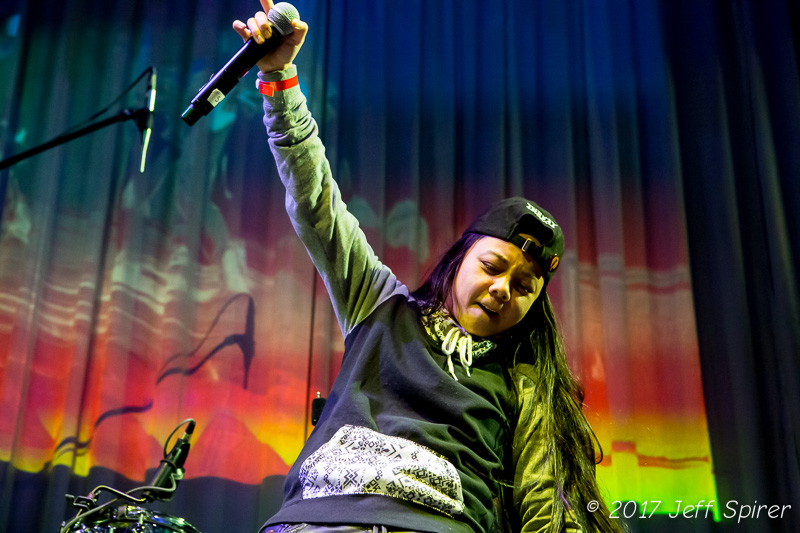 I was in elementary school when Miseducation dropped. Once I got the chance to fully soak up its magic, I became inundated into the paradise of Girl Power. With soulful R&B ballads exploring the complexity of love like “Nothing Even Matters” feat. D’Angelo to “I Used to Love Him,” to narrative-infused rap bars that broke down personal politics in Hill’s infamous hit single, “Doo Wop That Thing.” There really isn’t a track to skip on the project. That’s hard for any musician to accomplish. Overall, the album instilled in me a deep and profound sense of hope. It was a constant reminder that, yes, women can rap. This might seem like a no brainer to some, but to a young girl with a knack for words, it was scripture. 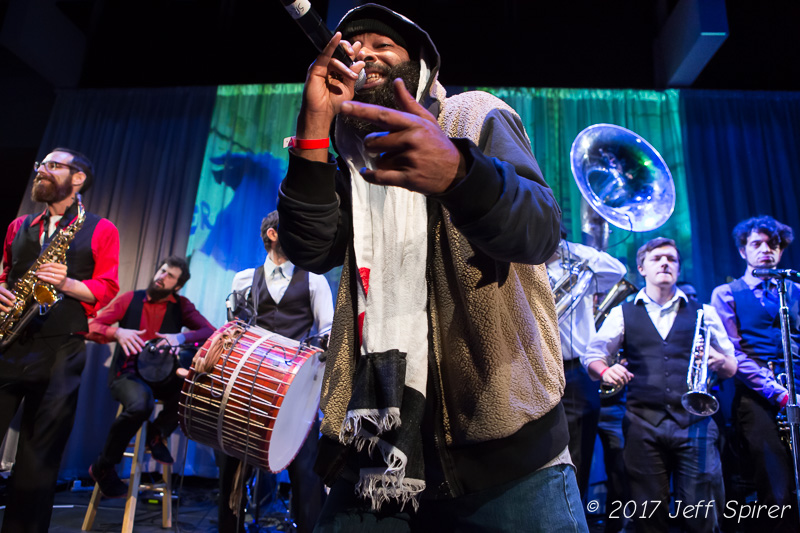 As an enthusiastic participant in the event, I was struck by how intentional Lyz and Meklit were in selecting songs and artists leading up to the final performance. For example, according to Meklit, it was obvious that The RUBaDUB POSSEE would rock the track “To Zion” since the band’s lead singer, vocalist/educator Kimiko Joy, is mother to a son named Zion. Similarly, the memorable interludes of Hill’s album were reimagined via conversations amongst Oakland School of the Arts students. This was a vital detail as the Miseducation aspect of the album served as a key component in its overall message of unlearning. I should add that a less obvious, but equally important, part of the endeavor was the recording process. The entire tribute album is currently available for purchase on Bandcamp with proceeds going to Undercover Presents and the bands. My band FR333 along with our feature Astu were awestruck by the unique opportunity to record at the legendary Fantasy Studios – one of the major perks of the process. A handful of other bands recorded covers at Zoolab, a West Oakland based music incubator. In this way, emerging bands and young musicians were allotted the opportunity to record professionally, meet and work alongside local legends like Kev Choice, The Dynamic Miss Faye Carol and KATDELIC, just to name a few. That’s the beauty of Undercover. Bands, new and established rock on the same stage, witness each other’s process and make lasting memories! 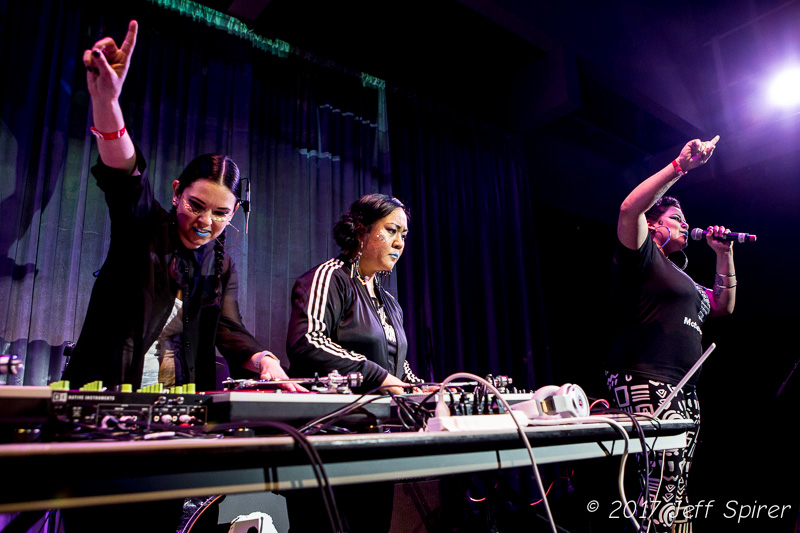 Those that witnessed one of the three memorable shows at YBCA last Thursday, Friday and Saturday not only saw an eclectic array of local musicians join forces to pay homage to Hill, but they also observed the power and prowess of folks that made stuff happen behind the scenes. Rachel Znerold (art director & lead stage designer) created unique visuals that went behind the musicians and Brendan Dreaper (lead sound engineer) made sure the sound was on point. Picture this: fifteen bands, over a hundred musicians, two women (Meklit and Lyz) handling logistical aspects of bringing these artists together, under one roof, for three consecutive nights – what could possibly go wrong? Miraculously, or perhaps due to the alchemy of the Bay Area arts scene, each night was a success. Each night the backstage area was a flurry of smiling, nervous faces, mutual encouragement, musicians tuning instruments from flutes to tubas and urgency. Artists danced along to one another’s performances from the crowd. This is what community looks like. 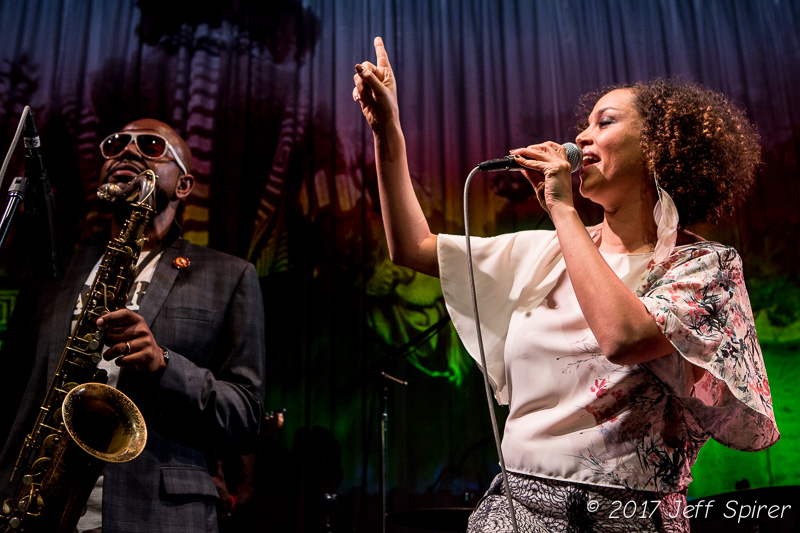 The show kicked off with a daring rendition of Lost Ones by the Femme Deadly Venoms. Their cover began with a violin solo by Shaina Evoniuk, which shifted into a DJ set by Lady Fingaz. Aima the Dreamer sang and flowed Hill’s famous lyrics as the audience was ushered into the ceremony. Next, Cosa Nostra Strings began their rendition of “Ex-Factor” with a lovely instrumental intro. They later wowed the crowd when they switched to a more percussion based performance. Their set featured Lilan Kane on vocals with raps by Dakini Star. RUB a DUB POSSEE brought the song “To Zion” back to its dub-infused reggae roots. Kimiko Joy sang, “Look at your career they say, Lauryn baby use your head,” with so much emotion it felt visceral. There was a beautiful segue from RUB a DUB POSSEE’s set to a jaw dropping performance of The Miseudcation of Lauryn Hill by Oakland School of the Arts’ Acapella group, Vocal Rush. The two teenaged lead singers, Yasmeena Datcher and Barbara DeVeaux Griffith, took the entire crowd to church with their hauntingly beautiful harmonies. 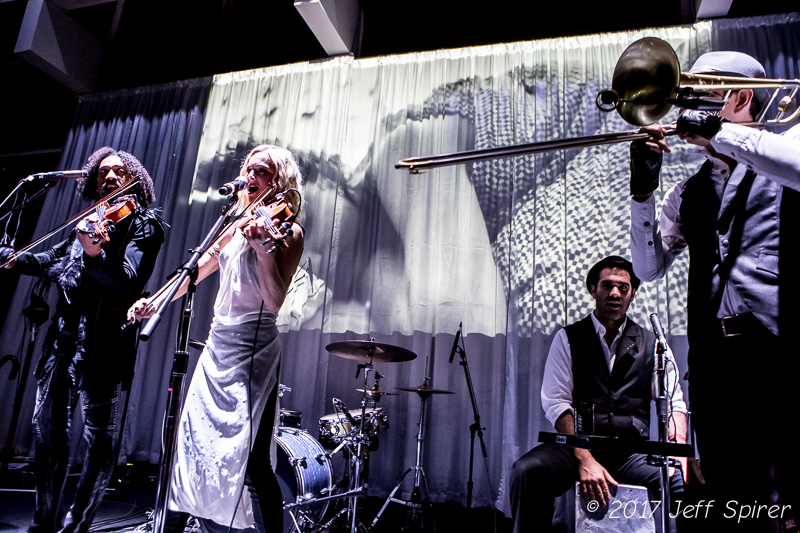 Next, Babii Cris rocked a raw hip hop rendition of “Doo Wop (That Thing)” with guest vocals from Xiomara. Babii Cris infused the song with her own unique lyrics, a refreshing take on the original track. Extra Nappy kicked off their cover of “Superstar” with an infectious tenor saxophone solo by Howard Wiley. Howard Wiley & Extra Nappy were also joined by Xiomara who sang and rocked out to Thomas Pridgen on the drums, Mike Aaberg on the Organ and Micheal tiny Lindsey on bass. It was epic! The audience soon learned that the big band feel was just beginning. Kev Choice and his ensemble of heavy hitters brought the house down with their set, starting with a medley of songs by the Fugees before flipping “Final Hour”. Throughout the three nights, both Jennifer Johns and Vivica Hawkins joined Kev Choice. 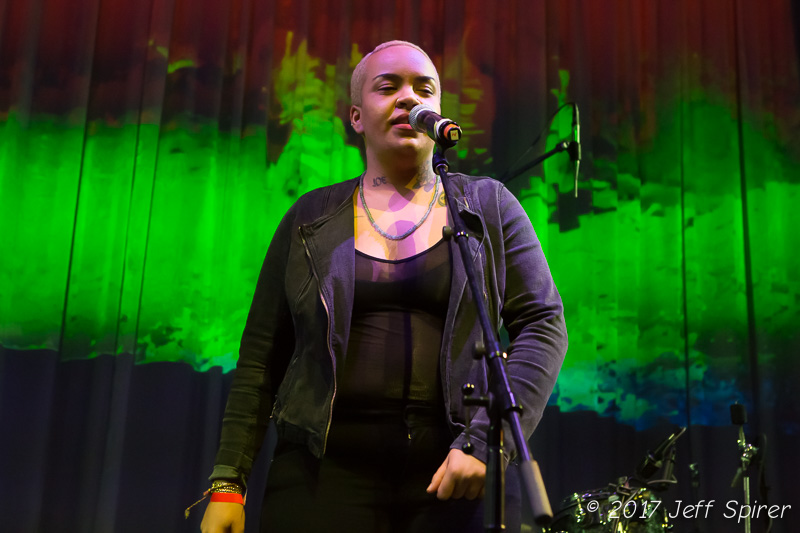 Next up, my band, FR333, changed the original arrangement of “When it Hurts So Bad.” The song became a sultry synthed-out track, but stayed true to its tone and content of love and heartbreak and everything in between. Singer Astu joined us onstage. Next up, Josh Jones and his Latin Jazz Ensemble rocked a bewitching rendition of “I Used to Love Him.” The cover was entirely instrumental, a fascinating twist from the heavily vocal show lineup. But there were more surprises in store as Inspector Gadje, a Balkan Brass band, rocked “Forgive Them Father.” Their set started with an enchanting Roma tune that shifted into a heart bounding crescendo of trumpets. The icing on the cake was two lyrically dexterous verses by none other than Sandman himself. 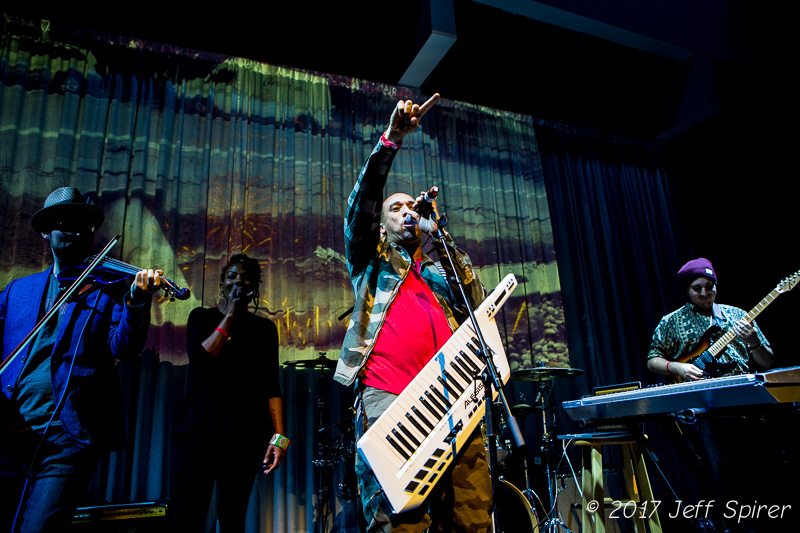 Afterwards, Noah Kibreab hypnotized the crowed with his Soulful cover of “Every Ghetto, Every City.” As a talented guitarist and vocalist, Noah held his own alone on stage, both wowing and controlling the audience. This was a breath of fresh air as most of the sets featured huge bands. Following this, Meklit flipped “Nothing Even Matters,” giving it a whimsical Ethio-Jazz makeover. She got the audience moving and grooving to her eclectic sound. Funk band, KATDELIC, followed. Bay Area legend RonKat Spearman provided the perfect groove as Lesley Grant rapped and sang a cover of “Everything is Everything.” The crowd was taken on a spaced out Afrofuturisitic journey. 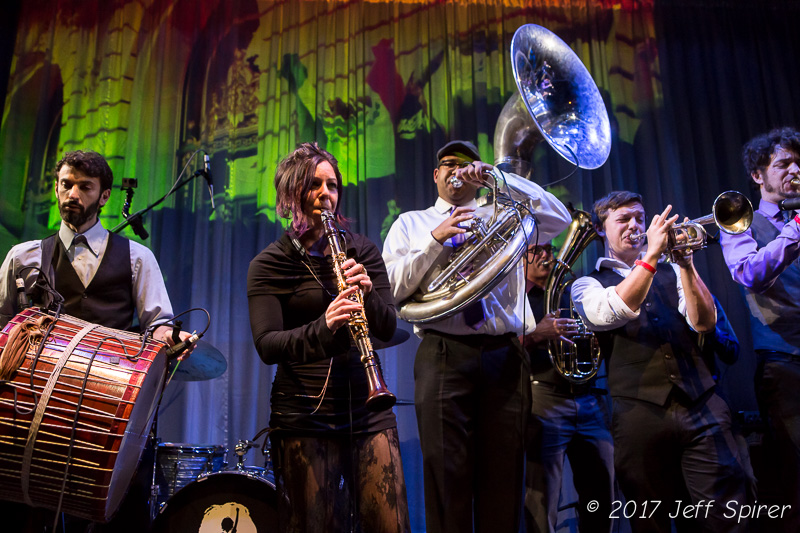 Speaking of journeys, The Dynamic Miss Faye Carol was next and we were all transported back in time. She brought the Blues to “Can’t Take My Eyes Off of You.” Her rendition traversed the original tone from a fairy tale to a down home southern song. Joe Warner accompanied Faye Carol on the keys. Her set was, as Faye’s name suggests, dynamic! The finale was brought to you by Sol Development, a Black Panther-esque Soul/Hip Hop bandwith Brittany Tanner on lead vocals and Karega Baily rapping his own take on the lyrical content of Hill’s track “Tell Him.” Brittany Tanner’s soothing voice brought the house down, brought us home and brought us all to the core of the album’s essence: hope.

Purchase Undercover Presents: A Tribute to The Miseducation of Lauryn Hill here.