If you grew up listening to Cali punk rock in the 80’s, you’ve likely heard of Mike Ness and Social Distortion, and you’ve more than likely seen their incredible live show. Founded in Fullerton, CA in the middle of punk rock mania circa 1978, Social Distortion has always been a bit different than your typical So Cal punk rock band. What started off as teenage angst influenced by the likes of The Ramones, The Clash, New York Dolls, and Dead Boys, in the late 70’s and early 80’s progressed into a sound of a different kind. Adding the influences of Johnny Cash, Hank Williams, and The Rolling Stones, they became what is today known as a melodic punk rock evolution with rockabilly roots.

Although Mike Ness was rehab and prison bound throughout much of the mid 80s, the momentum he built with the album Mommy’s Little Monster, along with continuous touring throughout the US and Canada, held the Social Distortion name together until his return with the album Prison Bound in 1988. This was the first album released with a heavy country and blues influence, and one many think formed the foundation of the rockabilly sound for Social D and the bands they influenced moving forward.

Today Social Distortion continues to tour, and in 2015 celebrated the 25th anniversary of their iconic self-titled album from 1990. Mike Ness has been the only consistent member of Social Distortion in the past eighteen years, as founding partner Dennis Danell passed away suddenly in 2000. Danell’s legacy was picked up by guitarist (and long time friend of Ness’) Jonny “2 bags” Wickersham, formerly of U.S. Bombs, The Cadillac Tramps, and Youth Brigade. “2 Bags” has been an active member of Social Distortion ever since, having co-written several songs on Social D’s 2004 release, Sex, Love & Rock n Roll as well as the band’s latest release from 2011, Hard Times and Nursery Rhymes. 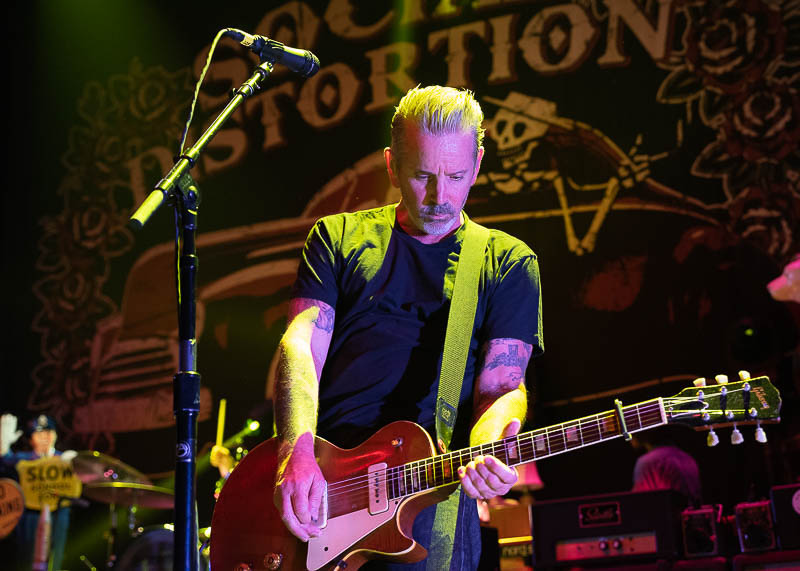 Ness has been telling the press for a few years now that a new release is in progress, having 20+ songs written to sort through. In his words, “we aren’t just sitting on our asses.” The last album was released in 2011, and Social D fans are anxious. Hurry it up already!

This San Francisco show on June 1st was the kick off of Social Distortion’s latest tour through the US and Canada. Social Distortion has a long history of playing in SF since the inception of the band, 35 years ago, and has played many iconic punk clubs throughout the 80’s and beyond, such as The Mabuhay Gardens, The Farm, and The Fillmore. As Ness pointed out, the band has historically had lots of good times here in the Bay, and lots of crazy times too. 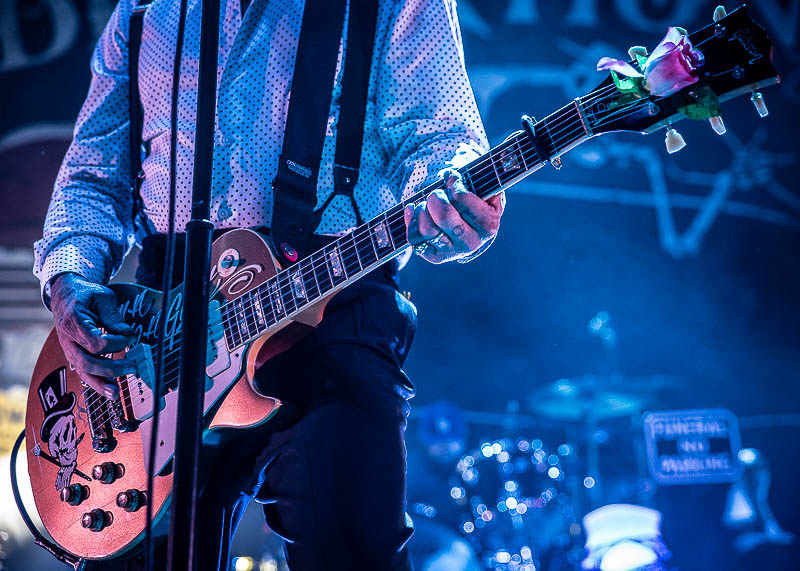 Throughout the show, Ness spoke a little about the theme of most of his songs, most written about the tough times in his life and how there’s still so much positive to look forward to, in his words.. “despite the current political climate.”

As with the many times I have seen this terrific band play since 1985, Ness does a considerable amount of talking and interacting with his audience, but the band is as tight and talented as ever.  It’s common for him to segue into the song “Over You,” with a little intro about heartache, but the excitement never gets old when Social Distortion launches into the fantastic sing along crowd favorite, “Mommy’s Little Monster.” A punk rock thrust into an otherwise very rockabilly set, that one always gets the audience pumping in the pit.

Touring opener Low Cut Connie, founded by the enigmatic and flamboyant Adam Weiner, was named after a waitress Weiner knew growing up in his hometown of Philadelphia, PA. Although Adam has only been playing as Low Cut Connie since 2010, his style harkens to the music of the 50s and 60s; specifically to one Mr. Jerry Lee Lewis.

Adam’s piano bench leaping combustible style was a hip-shaking treat that ignited an aging, yet diverse rockabilly fanbase and rocked the college kids from their seats.

Low Cut Connie is a sleek mixture of Billy Joel, meets Snow Patrol, with a little Etta James on the side. A very original yet classic sound.

Find out more about Social Distortion on their website.