The fearsome machine known as Slipknot laid waste to the packed crowd Saturday night at the Concord Pavilion, displaying all the theatrical and technical chops that make them one of the best live acts around. The nine-piece rolled onto stage playing one of the lead singles from their latest album, “The Negative One,” which features an absolutely pummeling beat to go along with its atonal and fearsome guitar parts. At this moment in time the crowd of fans in the general admission pit exploded with movement and energy. Slipknot fans, known as “maggots,” are some of the most devoted in music and they certainly displayed that dedication throughout the band’s 17-song set. Armed with plenty of lights and a giant video screen backdrop, Slipknot never let go of the crowd’s attention, a particularly impressive feat considering the attention span of most concertgoers these days. Thanks in part to an ingenuous light setup that prevented anyone with a cell phone camera from getting a decent picture and an unrelenting stampede of energy, there was only a small collection of fans that had their phones up to take pictures or videos. In fact one such person was thrown out halfway through the set by singer Corey Taylor for filming the band from the front row. 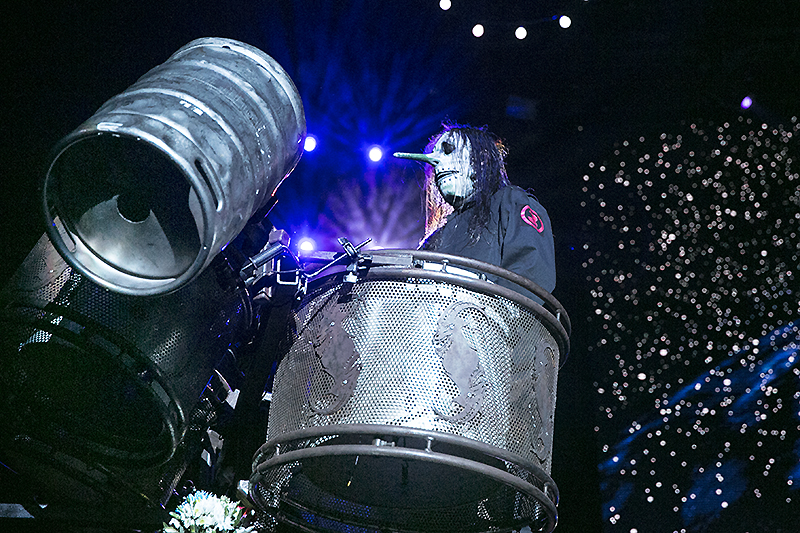 The mix sounded great and the newest members of the group, bassist Alessandro Venturella and drummer Jay Weinberg, both put forth impressive performances. Weinberg in particular stood out because of his ability to replicate the complex and insanely fast playing of former drummer Joey Jordinson. The band elected to focus much of the set on the most aggressive material from their newest album, “.5: The Grey Chapter,” which provided the perfect stimuli to incentivize the raucous audience to keep their energy levels up. 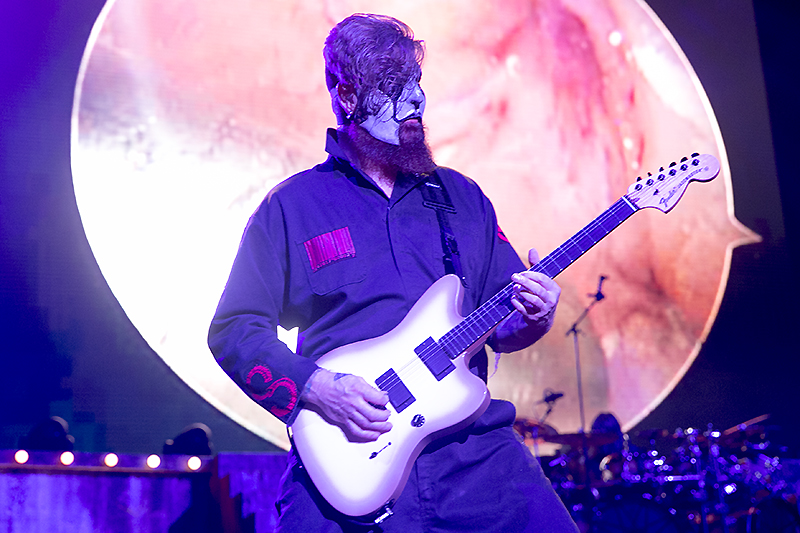 Still recovering from spinal surgery, Corey Taylor was not as mobile as on previous tours but it was hardly noticeable given the energy the rest of the band was putting out. He moved in and out of the chaos happening on stage and sang his parts with the power and authority that fans have become accustomed to. The rest of the group seemed to bring a lot of energy to counteract this absence, with percussionists Chris Fehn and Shawn Crahan storming around stage and providing intense backup vocals. Taylor was thankful for the fans turning out for the show as it had to be rescheduled from its original date in June, remarking that not one ticket was refunded despite the date change. 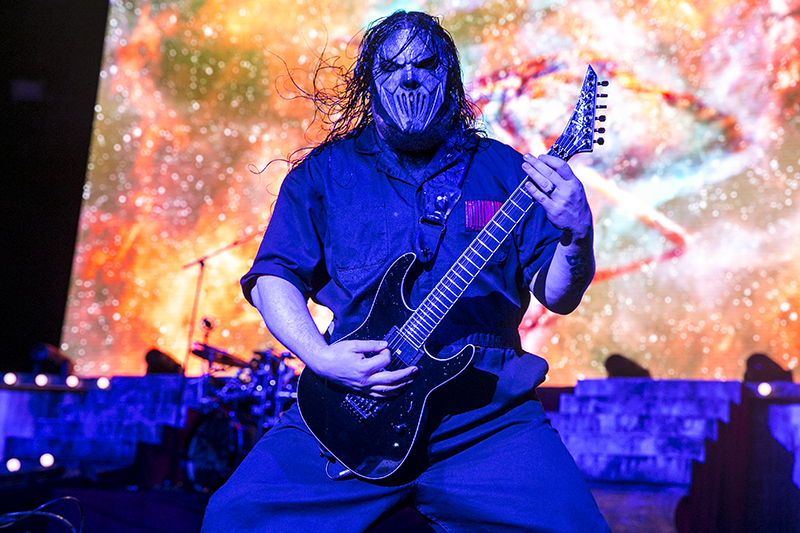 The band continued to roll through the set, taking a brief exit from the stage before returning for a three-song encore that really brought the house down. Starting off with the menacing “Surfacing” from their 1999 self-titled album really whipped the crowd into a frenzy. The song begins with an impossibly fast guitar figure from Mick Thompson, signaling the band to lurch into full attack mode only a few seconds later. They followed that up with a strong performance of the popular track “Duality,” before going into the crowd favorite “Spit it Out.” It was during “Spit it Out” that Corey Taylor commanded the fans in the general admission pit to do the customary kneel on the ground during the songs intense breakdown, with everyone jumping up on Taylor’s command once the song moved back into its regular full throttled intensity. It was a fitting finale to an impressive concert, one that definitively showed that Slipknot is sounding as cohesive and exhilarating as ever. 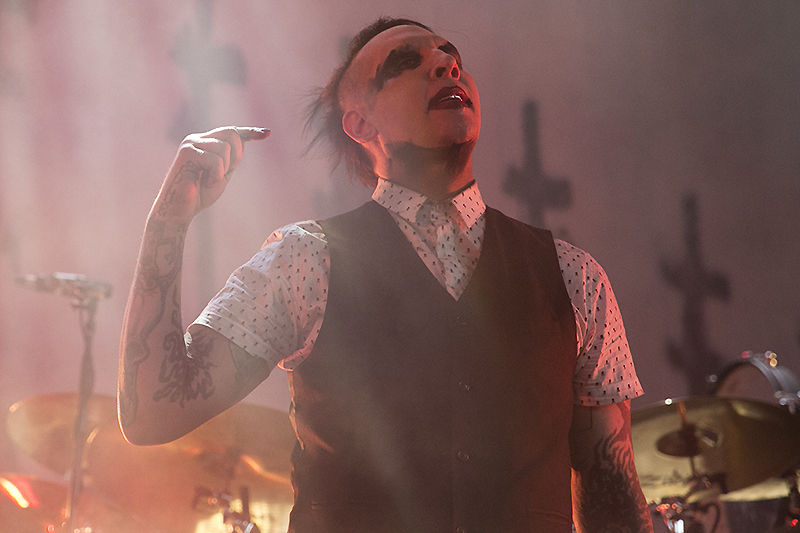 Marilyn Mason delivered a solid set, mixing in a good amount of old and new songs that were met warmly by the crowd. His backing band, which featured original bassist Twiggy Ramirez back in the fold, provided Manson with a pummeling sonic backdrop. 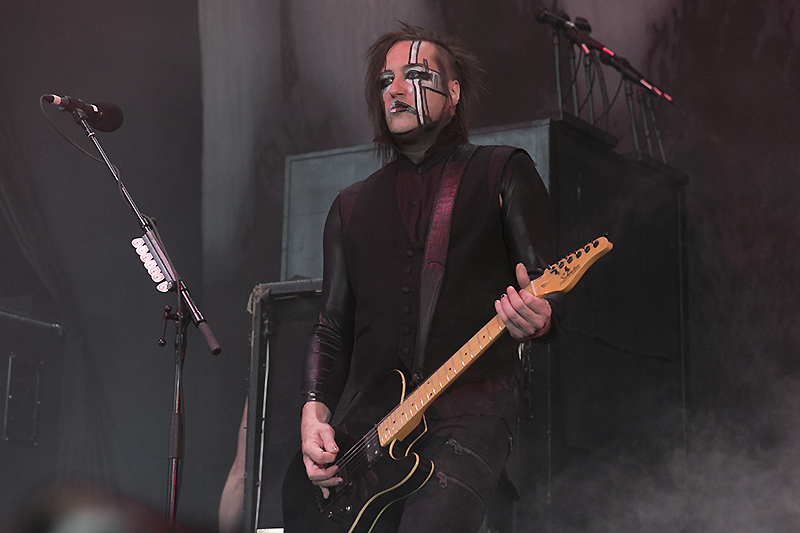 he group tore through some decidedly laid back and bluesy material off of his latest release, “The Pale Emperor,” before eventually digging back into the catalog to close out the hour-long set. A highlight was the band’s treatment of the Eurythmics 80s classic “Sweet Dreams (Are Made of This)” which was given an intense metal make over as Manson walked around on stilts, screaming out the lyrics with his typical caustic delivery. 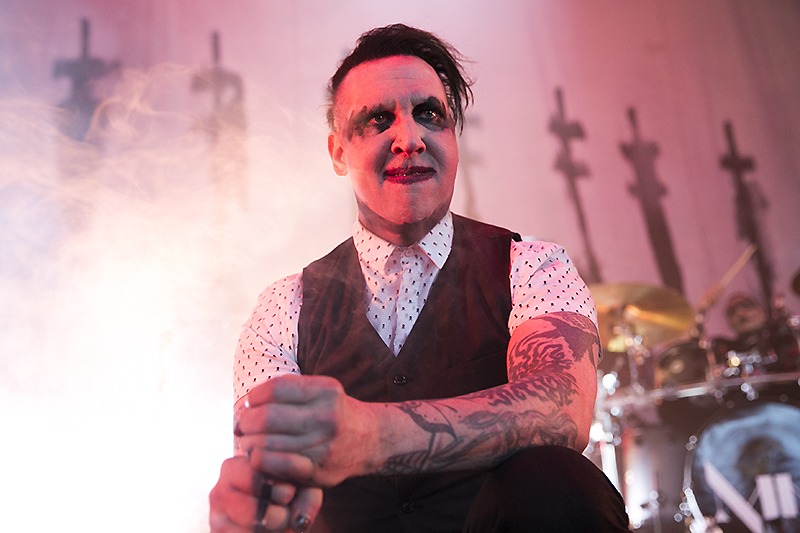 Manson closed out his set with two fan favorites, “Antichrist Superstar” and “The Beautiful People,” both of which featured plenty of flashing lights and smoke effects to enhance the atmosphere.

Check out this slideshow with more photos of Slipknot and Marilyn Manson by Raymond Ahner:

Setlist: The Negative One | Disasterpiece | Eyeless | Skeptic | Killpop | Dead Memories | The Heretic Anthem | Psychosocial | Pulse of the Maggots | The Devil in I | Wait and Bleed | (sic) | Surfacing | Duality | Spit It Out

For more information on Slipknot, check out their website.

Setlist: Angel With the Scabbed Wings | Disposable Teens | No Reflection | mOBSCENE | Irresponsible Hate Anthem | Cupid Carries a Gun | The Dope Show | Sweet Dreams (Are Made of This) | Antichrist Superstar | The Beautiful People |