Black Rebel Motorcycle Club and Death From Above 1979
The Masonic
October 22, 2016

Following a long inhale submersed in darkness, in a haze, Black Rebel Motorcycle Club exhaled, slowly playing. A California license plate inscribed “BRMC333” sat on the amps. Treating the audience like a pack, the trio led listeners into a mellow windy intro before proceeding to the soaring guitar riffs and rattling vocals of a new song titled “Bandung Hum.” Peter Hayes, Robert Leven Been and Leah Shapiro are BRMC, they hail from around the globe with Shapiro (drummer of Denmark’s duo the Raveonettes) in the mix for nearly a decade. BRMC formed in 1998 and has been touring and promoting their music ever since, with a few breaks here and there, the band has kept returning.

BRMC headlined after a pretty wicked performance from Canadian rock duo Death From Above 1979, their dynamic stage presence gained a new following of fans. These listeners were losing their minds to earth-quaking rock licks and invigorating electronic sounds. Hayes found a moment to blend into the crowd and view the stage from an audience perspective before going back to the green room to prepare for his set.

Getting back into the BRMC set, their new song “Bandung Hum” revved us up and led to Beat the Devil’s Tattoo’s growling rock escapade “Rival.” At this point, everyone in the house was moving to the music. To slow it down, though keeping the house steady, BRMC continued the set with the albums title track “Beat the Devil’s Tattoo.” The crowd joined in unison to harmonize, “Ahh’s” with Hayes.

It’s rare for BRMC to cover a song, though “Let the Day Begin” is the shining example of how their critical ear toward generating covers made for a powerful breakthrough, shaking off the band’s morals in exchange for a sweet serenade. For this number, BRMC brought out special guest guitarist Tom Ferrier; “Let the Day Begin” was originally recorded by Ferrier alongside Been’s father, Michael Been, with their band, The Call. Michael Been was passionate about his son’s music and toured with BRMC as a sound engineer, literally until the moment he passed away from a heart attack engineering one of their shows. Been continued The Call’s music playing as front man of his father’s Santa Cruz-based band in 2013.

The next round of songs was from BRMC’s highly acclaimed 2005 release, Howl. It seems that every time “Ain’t No Easy Way” is played it differs from the last. This version was slower than usual. Hayes always busts out his harmonica for this hit, and sings through the instrument, which creates a raspy distortion.

The slower pace was a nice draw into the album’s classic introductory tune, “Shuffle Your Feet.” The audience clapped to the beat and literally shuffled their feet as Hayes led us through the deeply rooted song as he sang, “Time won’t save our souls.” However, the bluesy pluck of strings soothed the soul. Just listening to this band feels like redemption.

Bringing the show back up to speed, the revving sound of guitar filled the room as the BRMC played “Berlin” from their 2007 album Baby 81. The house was ablaze with energy, clutching onto one another because of the elevation. Keeping the raucous tracks coming, the band performed “Six Barrel Shotgun” and “Red Eyes and Tears.” Climaxing with thumping beats and rhythmic static guitar alluring to the ear, BRMC’s transition brought the storm before the calm.

Bashfully, Been cradled his guitar and introduced their newest song, “Haunt,” after a trilled response from the audience. Slow with a sensual twang, this tune plucked heartstrings and set the mood for a Central Valley country adventure flick. The audience was left looking forward to more new BRMC tracks in the works. Few words were said throughout the night, most their verbiage was sung. This was recognized when Been managed to get some words into the song break. He said, “There’s a very strict, very harsh curfew here. We have to speed on through to the other side…”

Extracting from their 2003 album Take Them On, On Your Own, listeners were enamored by the stunning guitar riffs sprinkled throughout “In Like the Rose” and “Stop.” Things felt like they were going very strong, like we got our second wind, perhaps that’s because BRMC “Don’t know when to stop…” “Spread Your Love” from their self-titled BRMC was wild. Hair flew and everyone was jumping up and down to the rhythm of Shapiro’s pounding beat and a whole lot of heart on the strings of Been and Hayes.

To conclude, the exhilarating song “What Ever Happened to My Rock N Roll” shook us to the core:

Riled up, it left us wanting more. Though, we are thankful BRMC didn’t waste any time or breath on a night where curfew turns a rocking hard ride in the heart of the city into a young night of raw satisfaction. 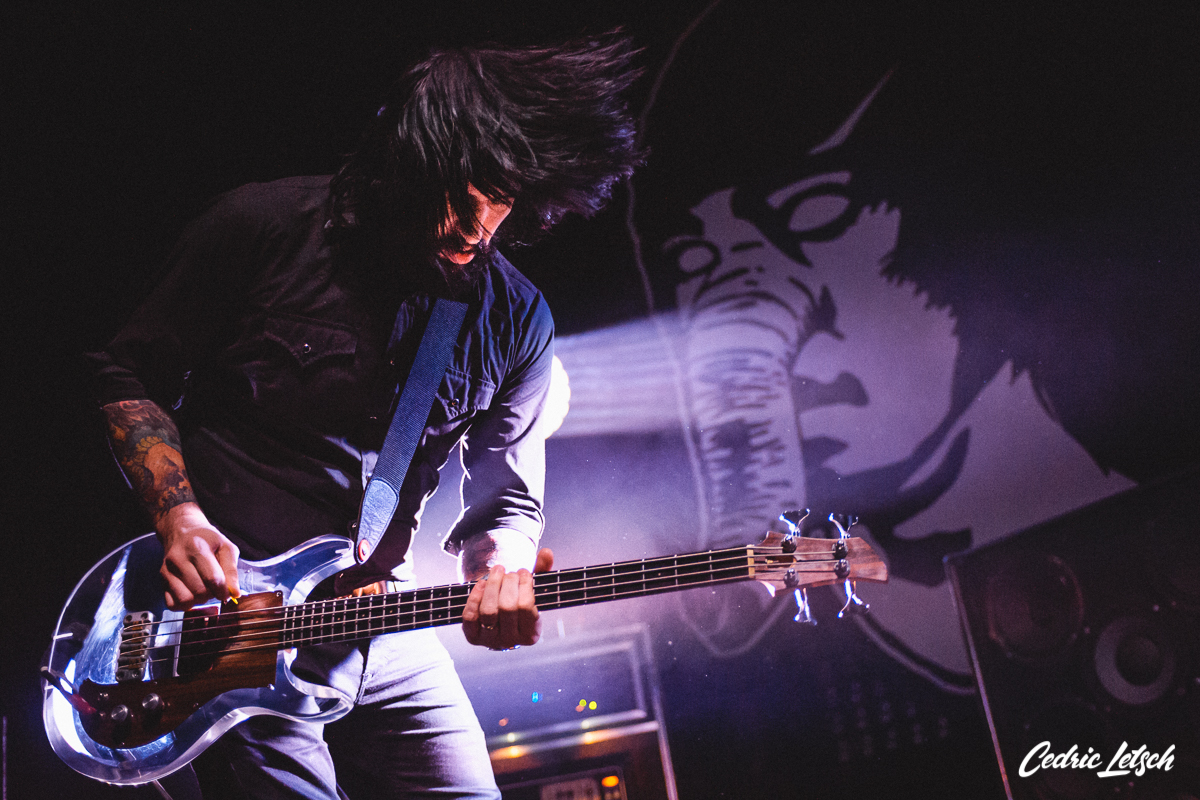 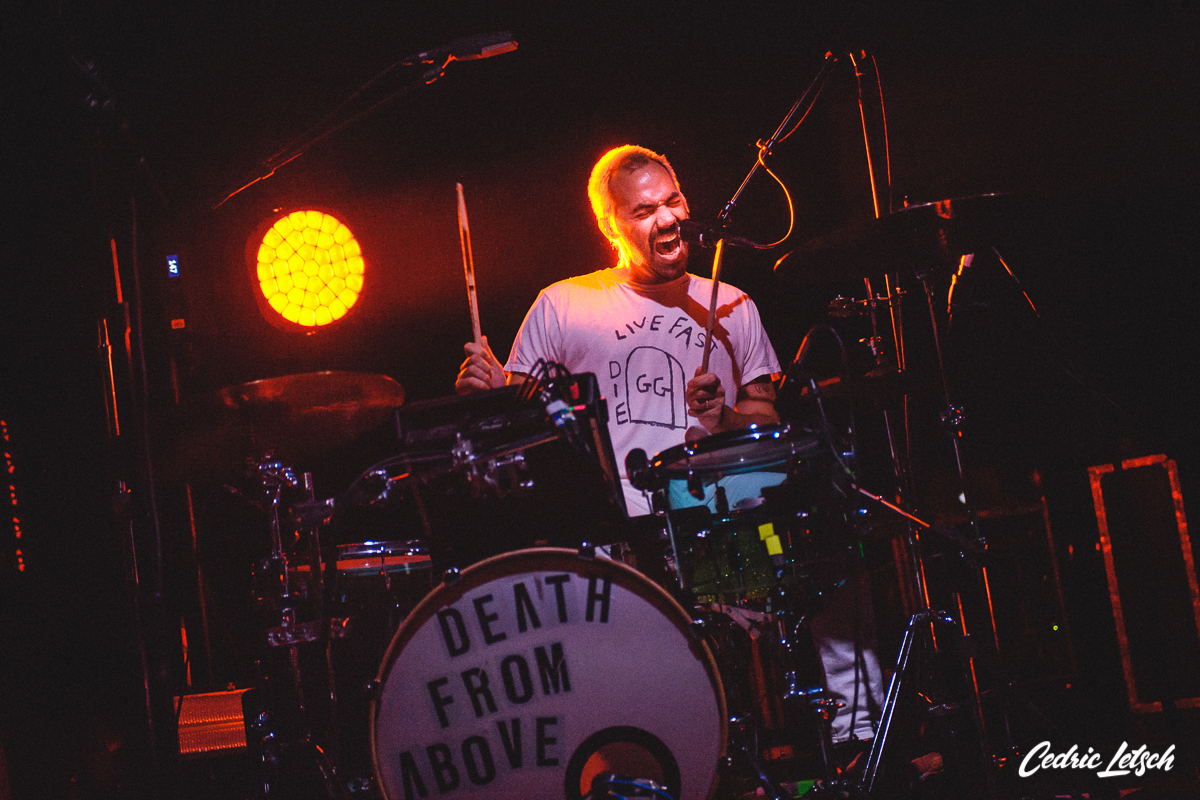 Hayes found a moment to blend into the crowd and view the band from an audience perspective before going back to the green room to prepare for his set. Death From Above 1979 had the energy of a speedball. Like a train wreck, their music took us on a wild journey, physically we were jolted by the electronic sounds of their danceable punk riffs. Heavy breaths over breaking beats, Grainger’s timing and Keeler’s fiery energy rocked the house as fans screamed lyrics with the duo.

For more information about Black Rebel Motorcycle Club, check out their website.

Check out Death From Above here.