When the legendary German rock band Scorpions come to town, you know you are in store for one exceptional evening of big-time arena anthems and delicate ballads, and this was the case on a Wednesday night at Oracle Arena. 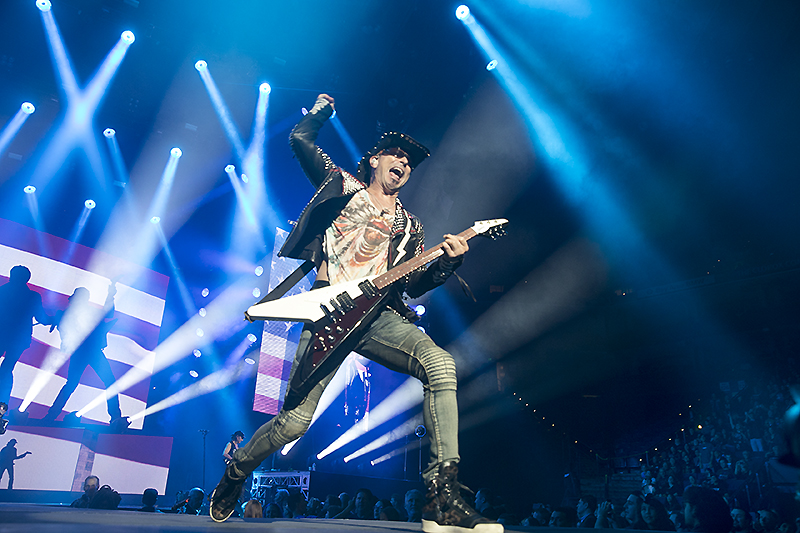 The band brought plenty of energy and enthusiasm to the packed house, opening the evening with the tight rocker “Going Out With A Bang” from their latest release Return to Forever. That was only a taste of what was to come as immediately after that song’s conclusion guitarist Rudolf Schenker kicked into the opening riff of the classic “Make it Real,” a fist-pumping rocker that revved up the crowd. 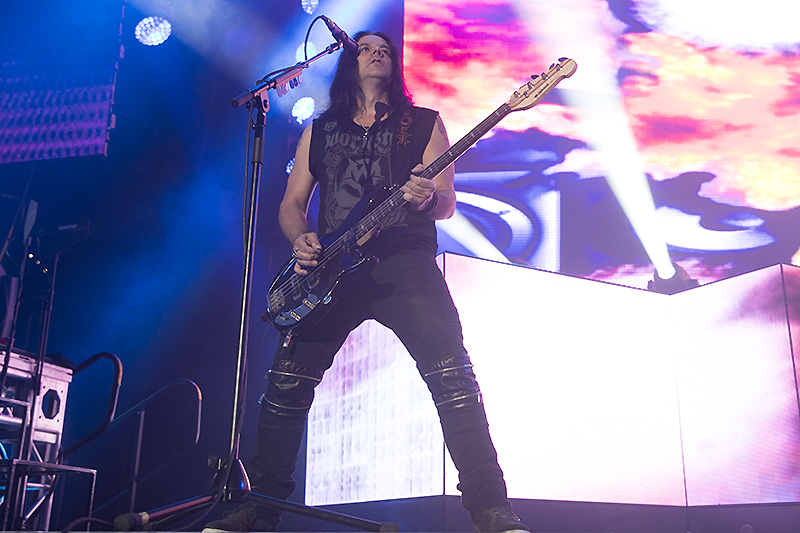 While the building blocks of the Scorpions sound are straightforward rock guitar riffs, their boundless energy and enthusiasm bring out something extraordinary in each song as was the case on the thumping “The Zoo,” a fan favorite track that relies on a swinging bass and drum groove from Paweł Mąciwoda and Mikkey Dee. The song also featured a superb and interesting guitar solo from Matthias Jabs that made use of a talk-box which utilizes different mouth movements to modulate the sound of the guitar. 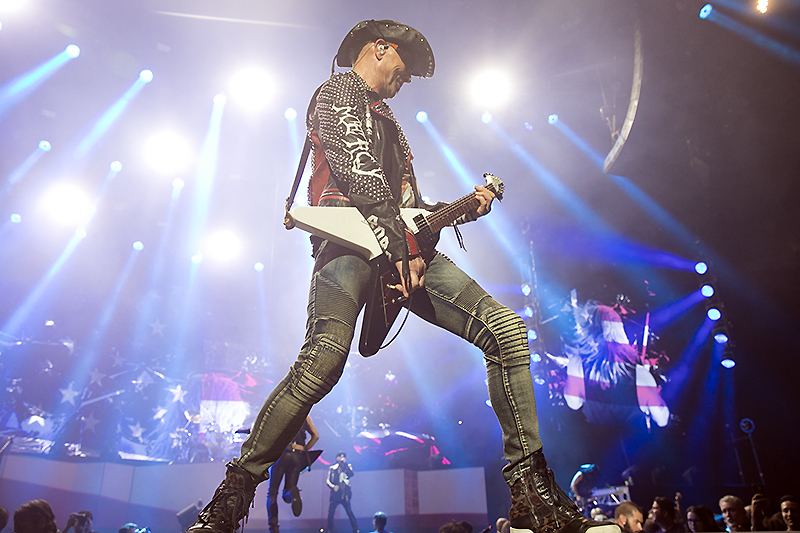 Next up was the rampaging guitar instrumental “Coast to Coast,” which saw singer Klaus Meine donning a guitar to play backup as Jabs and Schenker tore through the piece. Eventually, all three guitarists plus Mąciwoda maneuvered towards the front of the extended stage for the final harmony section, a catchy and anthemic bit that saw plenty of tasty licks and harmonies being thrown out. 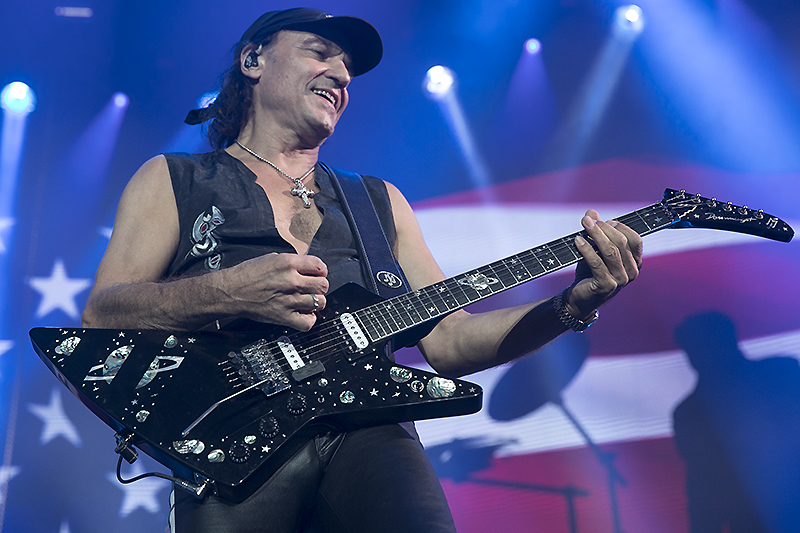 The first real surprise was up next as the band tore through a medley of some of their early 70’s material, rolling through “Top of the Bill,” Steamrock Fever,” “Speedy’s Coming,” and “Catch Your Train,” with Meine showing no signs of age as he effortlessly seemed to hit each vocal line perfectly. A few songs later, Jabs took center stage for the racing guitar instrumental “Delicate Dance,” which revolved around a series of intricate guitar lines and featured plenty of unadulterated guitar heroics to the delight and awe of the audience. 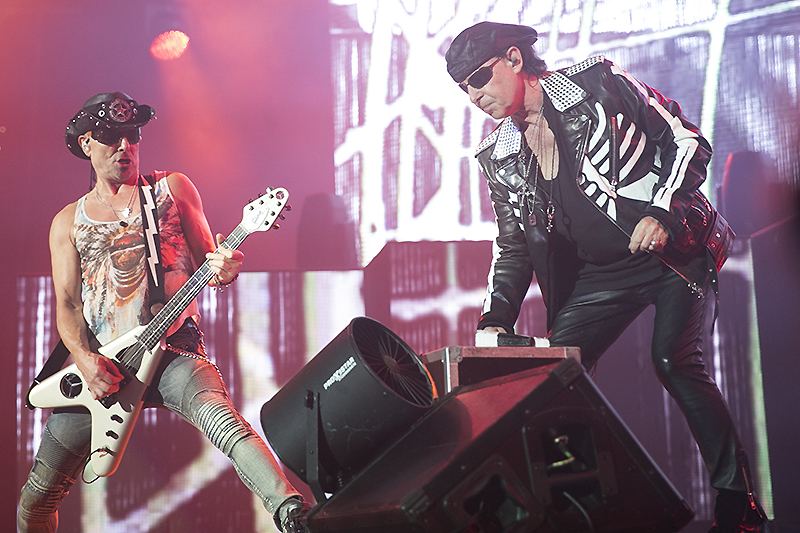 Following this, Jabs and Schenker exchanged their electric guitars for acoustic ones as the band came out to the edge of the stage to play an inspired acoustic medley of “Always Somewhere,” “Eye of the Storm,” and “Send Me an Angel.” This was a nice respite from the full-on rocking and was another showcase into the musical diversity Scorpions bring to the table. After this, the group ripped through one of their most well-known songs, the anthemic ballad “Wind of Change,” which had the crowd in full sing-along mode for its entirety. 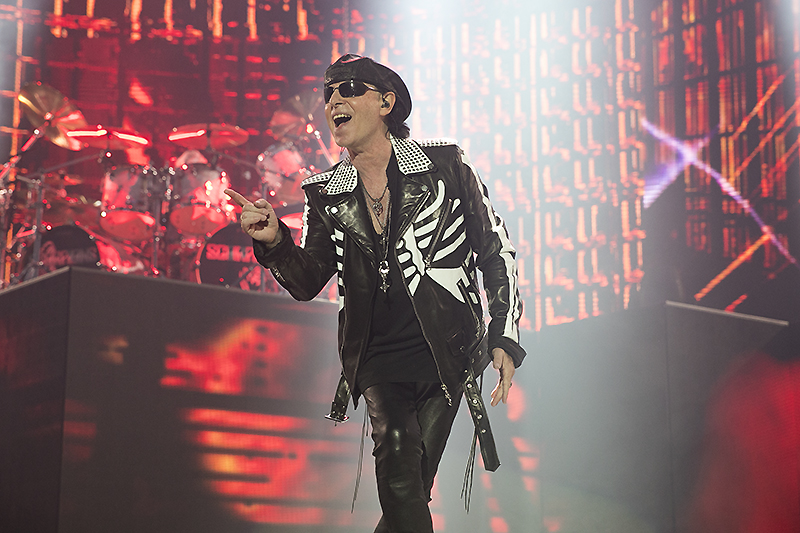 The most significant surprise of the night was about to hit. 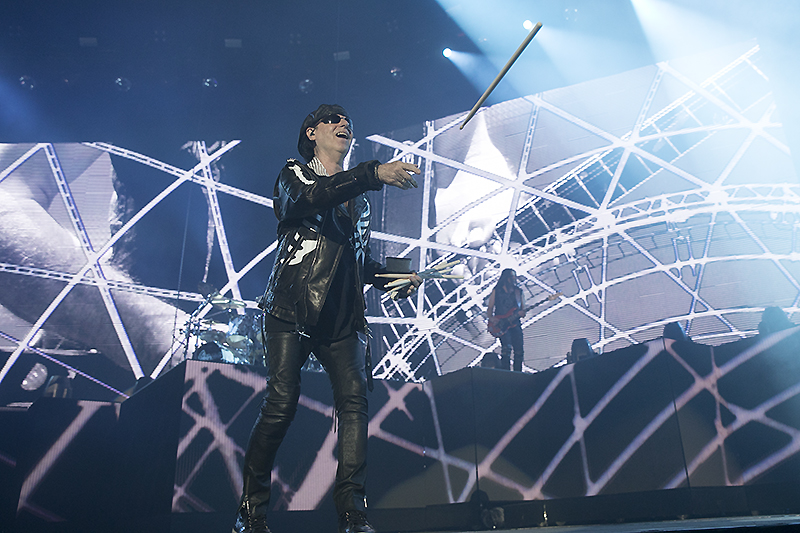 As the band took a short break in between songs, Meine began to talk about how drummer Mikkey Dee, formerly of Motörhead, had suggested that the group cover a Motörhead song in tribute to their good friend Lemmy Kilmister before starting into the famous intro of the legendary thrash of “Overkill.” While the Scorpions are not known for covering other bands, this version stood out and was a fitting tribute to the late Motörhead frontman. The song also proved to be the perfect segue into a blistering drum solo, where Dee used all manner of jaw-dropping techniques for almost 10 minutes straight. 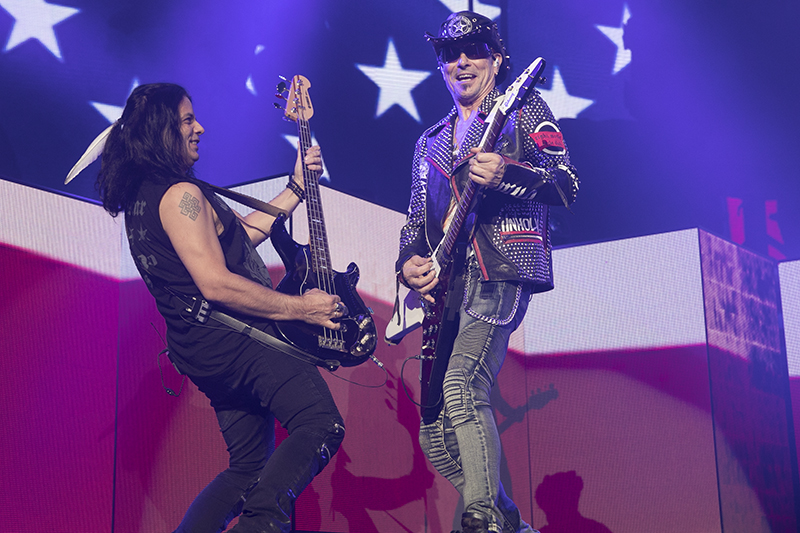 Eventually, Schenker returned to the stage with a guitar fitted with a smoking exhaust to begin playing the famous opening to “Blackout,” featuring a string of fret-burning guitar solos from Jabs and another excellent vocal performance from Meine. The band closed out the main portion of the set with a striking rendition of another 80s classic in “Big City Nights” before briefly leaving the stage. The band returned for a high powered three song encore of their biggest rock anthems in “No One Like You” and “Rock You Like a Hurricane” along with the stately power ballad “Still Loving You.”  Even after fifty years in the business, Scorpions still deliver an astonishingly tight and powerful live show, as every song just dripped with positive energy and enthusiasm, a true testament to the band’s enduring appeal and skill as musicians.

Megadeth opened the night with a stomping set of thrash metal, with plenty of cuts pulled from their latest release, Dystopia.

The band charged out of the gates with the classic “Hanger 18,” a scorcher of a track filled to the brim with politically conscious lyrics and lyrical guitar solos from Dave Mustaine and Kiko Loureiro.

The group had designed their set to blow over the audience with sheer aggression as it included the burning thrash of “Take No Prisoners” and the speed metal of “Mechanix,” a song Mustaine originally wrote while a member of Metallica. Backed by a massive video screen which projected the band’s visually stunning music videos, Megadeth were firing on all cylinders during their short set, getting the crowd pumped up for the upcoming spectacle of the Scorpions.

Here’s a slideshow with more photos of Scorpions and Megadeth by Raymond Ahner:

Setlist: Going Out With a Bang | Make It Real | The Zoo | Coast to Coast | Top of the Bill / Steamrock Fever / Speedy’s Coming / Catch Your Train | We Built This House | Delicate Dance | Always Somewhere / Eye of the Storm / Send Me an Angel | Wind of Change | Rock ‘n’ Roll Band | Overkill (Motörhead cover) | Drum Solo | Blackout | Big City Nights || Encore || No One Like You | Still Loving You | Rock You Like a Hurricane

For more information about Scorpions, check out their website.

Find out more about Megadeth here.