Rod Stewart just might be the coolest rockstar out there. At the very least, he left us enamored after his recent show at The Shoreline Amphitheater. With an incredible career that has spanned five decades and has included stints with The Jeff Beck Group, Faces, and a solo career that has netted sixteen top ten singles in the US and 62 in the UK, he has sold over 100 million records worldwide, won a Grammy, has a star on the Hollywood Walk of Fame, and was knighted in 2016. One wonders why he isn’t sipping tea off in an English garden somewhere or doing the dreaded end of career Vegas residency like he’s expected to do. To be honest, we may have been anticipating him to be sitting on a stool singing old standards while we smiled in appreciation but instead he kicked our asses. The guy simply looks and sounds amazing and has put together a show that is superior to anything we’ve seen this year. 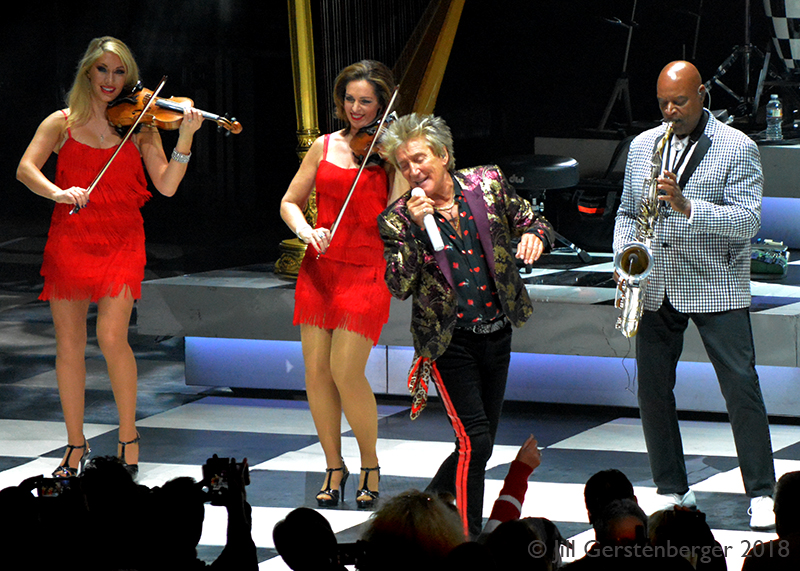 Stewart’s assembled a band of very talented musicians that includes Don Kirkpatrick on guitar, Conrad Korsch on bass, Dave Palmer on drums, J’anna Jacoby on violin, mandolin, and acoustic guitar, and Jimmy Roberts on saxophone. The set included lots of personal and humble touches including a bagpipe intro of “Scotland the Brave” and a backdrop that had several large projected screens that looked like a scrapbook that had old personal photos, historical images, artful flowers, and live projected video of the show. It was very nicely done and kudos to the set designer for creating such a tasteful design that added to the show without distracting from it. 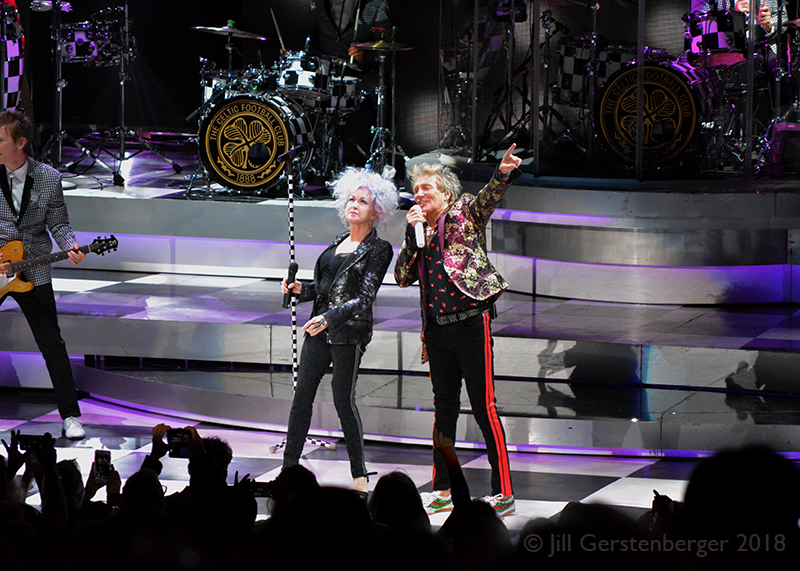 Stewart has gathered a bunch of talented and sexy females who can not only play the mandolin, fiddle, harp, and sing amazing, but simultaneously look fantastic in mini fringe go-go dresses; Stewart seems to enjoy being flirty with them while traipsing around the set. If you were in that position wouldn’t you do the same? You can’t argue that his voice is simply top notch. While it may not project as loudly as it did when he was younger he is totally on key and hasn’t resorted to changing pitch like some performers do as they get older. 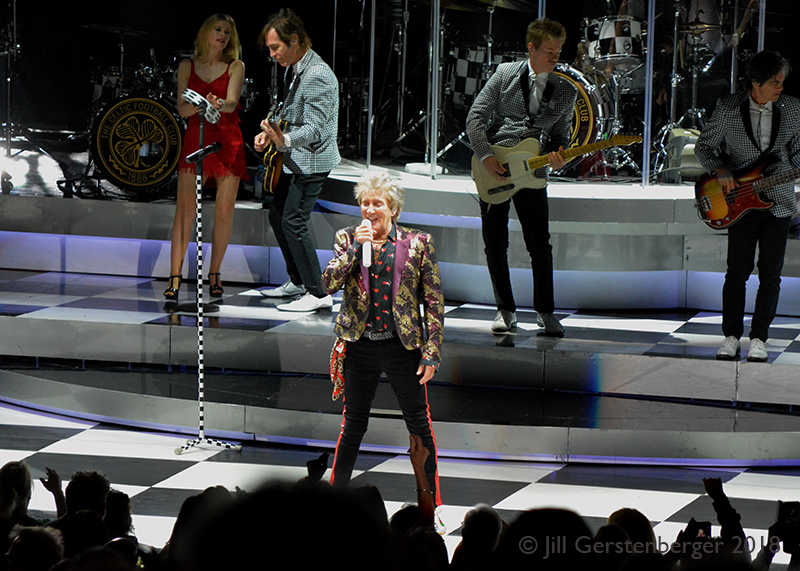 Stewart is a soul singer, and when he does the covers of Sam Cooke’s “Having A Party” or Etta James’ “I’d Rather Go Blind,” you really hear his range and the emotion he brings to his performances and it is spectacular. One of the more exciting moments of the evening was when he brought out opener Cyndi Lauper to duet with him on the Marvin Gaye and Kim Weston cover “It Takes Two.” Lauper is as adorable as ever and still as stylish in her Vivian Westwood style blazers and oversized silver/gray hair. Her voice continues to sound amazing; the two of them had a great fun chemistry onstage. There were several nice memorial tributes in the show including ones to Chuck Berry, Aretha Franklin, and a very touching one to John McCain who had passed a couple days before, when Stewart dedicated “Rhythm of My Heart” to him while projecting images of his Naval career. 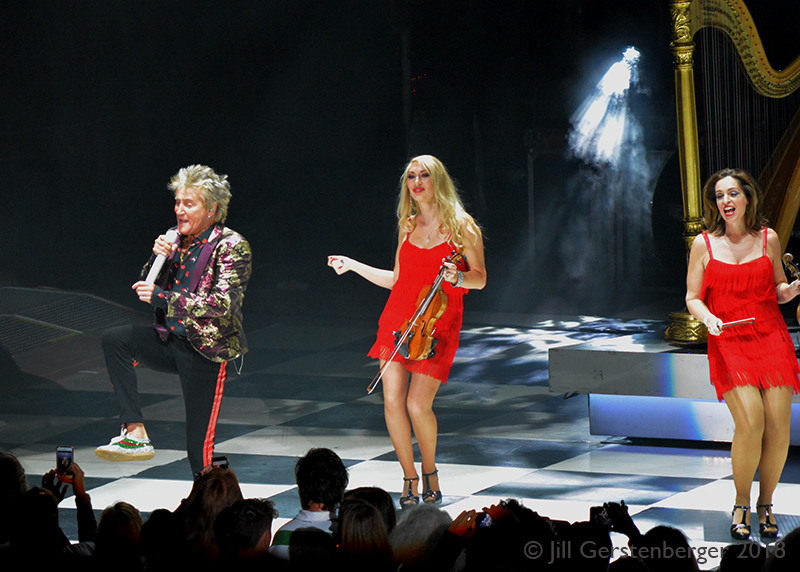 Stewart had several costume changes and at one point he came out in a super stylish shiny silver suit with his ankles showing and then remarked on audience members’ outfits before performing a few great acoustic numbers including the Cat Stevens hit, “The First Cut is the Deepest,”  a cover of The Impressions; “People Get Ready” and the delightful Van Morrison cover, “Have I Told You Lately”, which had a fantastic sax solo. Stewart seemed very confident and at ease even when he needed to tell the enthusiastic crowd to return to their seats because security had told him it was a fire safety hazard while they filled the aisles. He ordered them back with grace and a bit of humility and quickly got the show back on track again like a true professional. 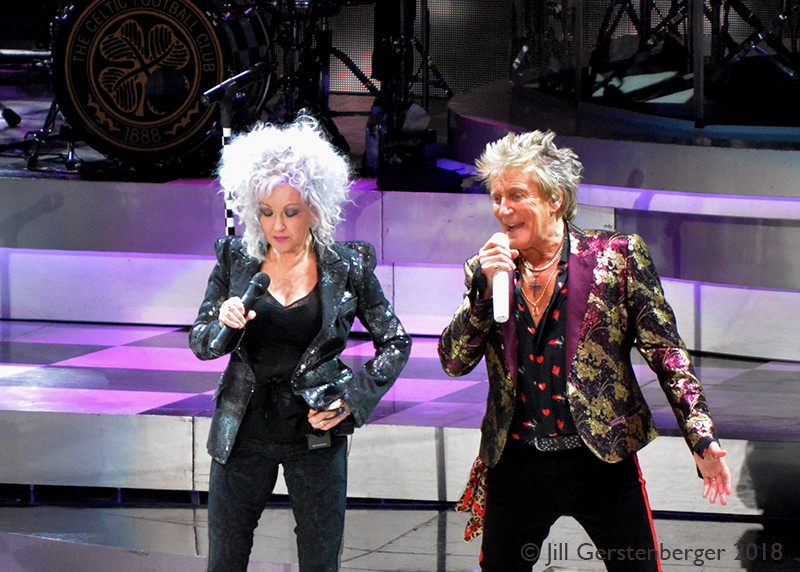 The highlight of the evening was when Stewart came out in some ripped football pants and cleats and kicked dozens of soccer balls in to the upper deck of Shoreline (which was at least 200 yards away) while singing “Stay With Me.” Yes, the guy can really play football and keep a smile on his face and sing at the same time. It was amazing. The finale was an extended version of his hit, “Do Ya Think I’m Sexy” (yeah, shamefully we kind of do) followed by the great Sutherland Brother’s cover “Sailing” which was also fantastic. 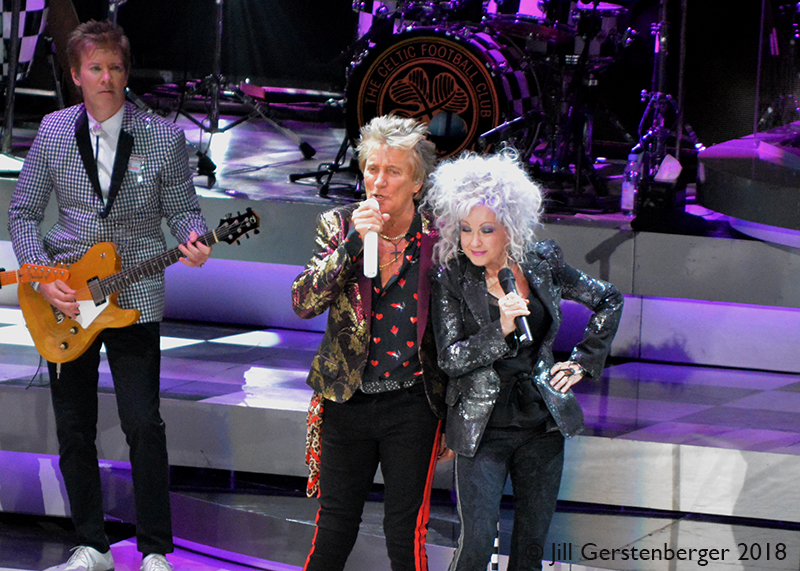 We can’t recommend this show highly enough and we hear Stewart has a new album coming out shortly. We can’t thank Stewart enough for all the great music over the years and for continuing to be such an amazing artist in rock n’ roll. Go see this show!

Here’s a slideshow with more photos of Rod Stewart and Cyndi Lauper by Jill Gerstenberger:

Setlist: I Drove All Night | She Bop | All Through the Night | (Jules Shear cover) | Encore: | The Goonies ‘R’ Good Enough | Money Changes Everything | (The Brains cover) | Time After Time | Girls Just Want to Have Fun | (Robert Hazard cover) | Not My Father’s Son | True Colors