It’s not often you see an up and coming artist that has that “it” factor that leaves you feeling like you’re seeing something magical, but Fantastic Negrito did just that at a recent performance at the UC Theatre in Berkeley. Fantastic Negrito, whose real name is Xavier Amin Dphepaulezz, doesn’t really fit the mold of and up and coming artist. He’s in his late 40’s and plays a blend of roots blues, soul, and hard rock that isn’t getting a lot of airplay these days. In truth, Dphepaulezz has already had a career in the music business and was signed by Prince’s former manager in 1993 to Interscope Records. He released his first album, ‘The X Factor’, under the name Xavier in 1996 but it didn’t have commercial success and he became disillusioned by the record industry. In 1999, he was released from his record contract after a near fatal car crash left him in a coma for three weeks. In 2007, he left the music business to start a family but returned in 2014. 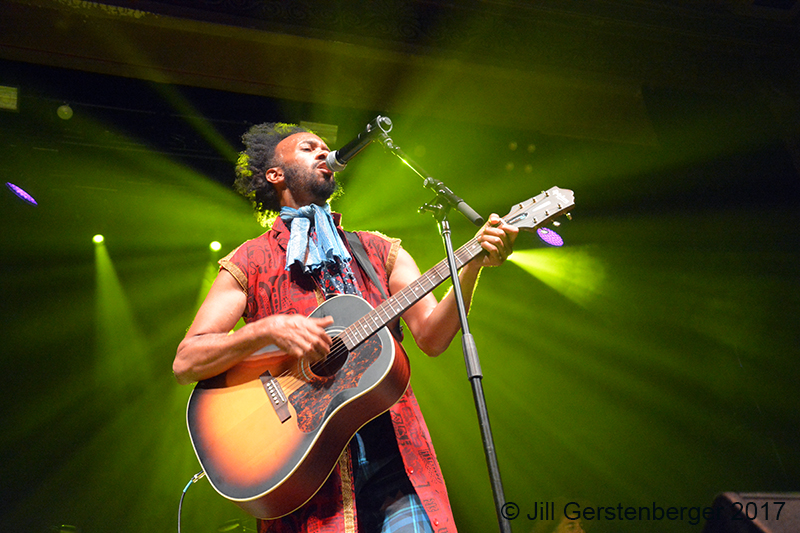 After several reincarnations he came up with the idea for Fantastic Negrito with a musical style which he described as “black roots music for everyone.” He started playing his music on the streets of Oakland and mastered connecting with people while just walking down the street. In 2015, his manager submitted a video to NPR and he won their Tiny Desk Contest, which gained him some attention. In 2016, he released an album, The Last Days of Oakland, which won him his first Grammy in 2017 for Best Contemporary Blues Album. He has been touring internationally the past year and has been opening for Sturgill Simpson; this show at the UC Theater was a welcome homecoming. 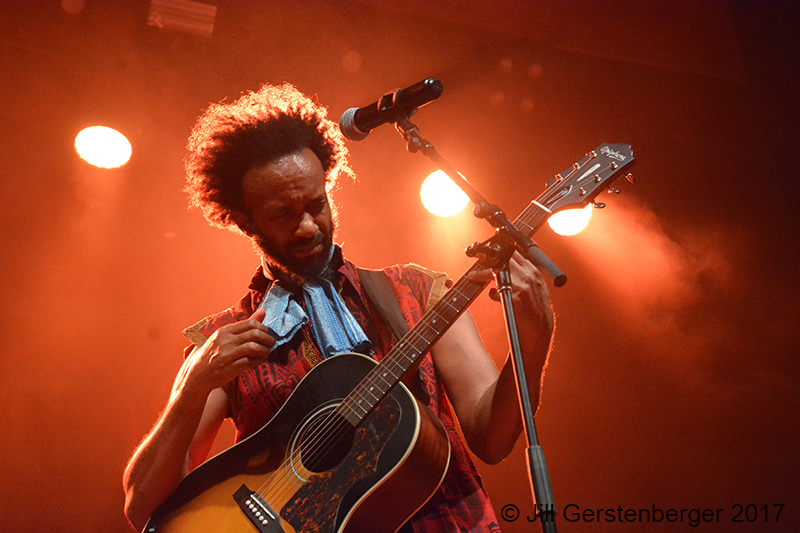 The house was packed to the rafters with an eclectic crowd filled with all races, ages, sexes and everything good about the Bay Area that we may have lost touch with. Fantastic Negrito hit the stage with a powerful opener, “Working Poor,” and from the moment he hit the stage he had the audience in the palm of his hand. Fantastic Negrito has loads of charisma and great style with a shock of hair that stands out everywhere, along with a clothing style that looks like a blend of 70s retro, punk rock, and African influences. 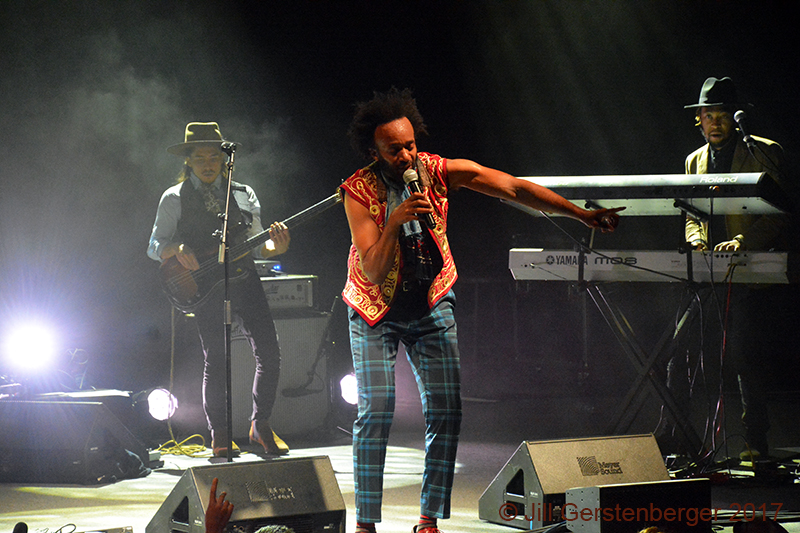 The thing that really stands out though are the songs. He has a great soulful voice but his lyrics grab you with his life experiences of a street hustler to a family man coming through. In “Honest Man” he laments, “Yesterday it felt so good. Today it feels so bad. These streets got me wondering. Looking for my fix again. I should have paid the Chinese girl. Now I’m losing everything I have.” In “About a Bird” he sings the genius lyrics, “First she wanted me…then she wanted me dead.” Negrito has the ability to take the crowd through a series of emotions by having them soul clap through upbeat tunes, reciting poems in between songs, and bringing some reality in by talking about loved ones he’d lost through gun violence. 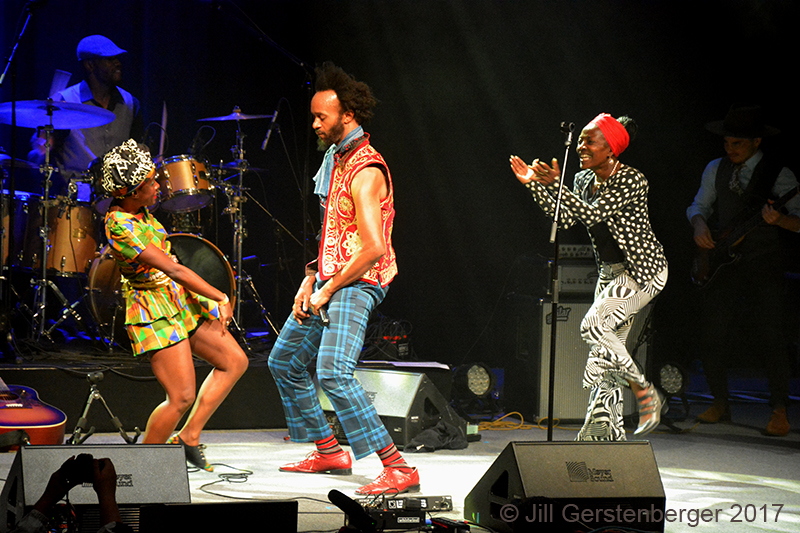 He did a version of “In the Pines” where he changed some of the lyrics to talk about this issue. He also played a new tune, “Plastic Hamburgers,” that had a great hard rock vibe that has us looking forward to his next album. Negrito finished up the set with a very funky and uplifting version of “Take That Bullshit and Turn It into Good Shit” that sounded a lot like a James Brown tune. Negrito invited a couple dancers from the audience onstage and made for an entertaining mix with the band. One thing that stands out about Negrito’s performance is that he has something to say and he clearly views what he is doing as art which is very rare these days. Keep your eye out for this guy. We think he’s got some great music coming in the future and some staying power to boot.

Just before Fantastic Negrito was a band called Mad Noise from Oakland. They started out in 2010 as a busking band playing the streets of San Francisco. Their unique sound combined elements of soul, jazz, blues, hip-hop, and punk. With a cello player and interesting harmonies, they sounded like a hip-hop version of Nick Cave and the Bad Seeds and the audience loved them. Try to catch them out playing live if you can. They’re one of the more interesting local bands we’ve seen for a while.

Opening the whole show was a band called The Jamming Nachos. These kids played a blend of rap, hip hop, and hard rock with lyrics that were socially conscious. It was super inspiring to hear a group of kids under 21 playing music that has roots in funk, soul and rap. They opened their set with a rap song, “It Could Have Been Me,” that addressed the Black Lives Matter and police brutality issues. Lead singer Elena Ruiz has an amazing voice with touches of a gospel and blues singer much older than her years. The backing band had some great timing and funk and jazz influences from greats like The JB’s and Booker T. Hearing these kids left us hopeful about the future of music and we’re hoping they continue and have a successful career in music.

Overall it was a fantastic night of Bay Area music and one that left us uplifted and inspired. Oakland may become a simmering hotbed of great music if this show featuring Fantastic Negrito as the headliner is any indication. This is some of the most inspiring and unique music we’ve seen in a while.

Here’s a slideshow with more photos of Fantastic Negrito, Mad Noise, and The Jamming Nachos by Jill Gerstenberger:

Find out more about Fantastic Negrito on his website.

Learn more about The Jamming Nachos on their website.