Riff rock is alive and doing very well if this past Sunday at the Regency Ballroom is any indication. Loud, pulsing, hard charging, drive real fast rock that rattles your teeth and puts a buzz in your brain. That’s what the crowd was served in huge portions, and it was Clutch and their head banging associates Zakk Sabbath and Kyng that were delivering the goods. Clutch, the quartet from Maryland that puts the northeastern stamp of hard rock firmly on the forehead of anyone that sees them live, seized the Regency as its own for a 90 minute set that reminded everyone why they have been a cult favorite since 1991.

Blasting out of the gates with the fantastic skull shaker ‘Sucker for the Witch’ (Psychic Warfare – 2015), vocalist Neil Fallon (vox, guitar, harmonica), Tim Sult (guitar), Dan Maines (bass), and Jean-Paul Gaster (drums) put the pedal to the floor and didn’t let up until the 17-song ride was over and the lights came on. 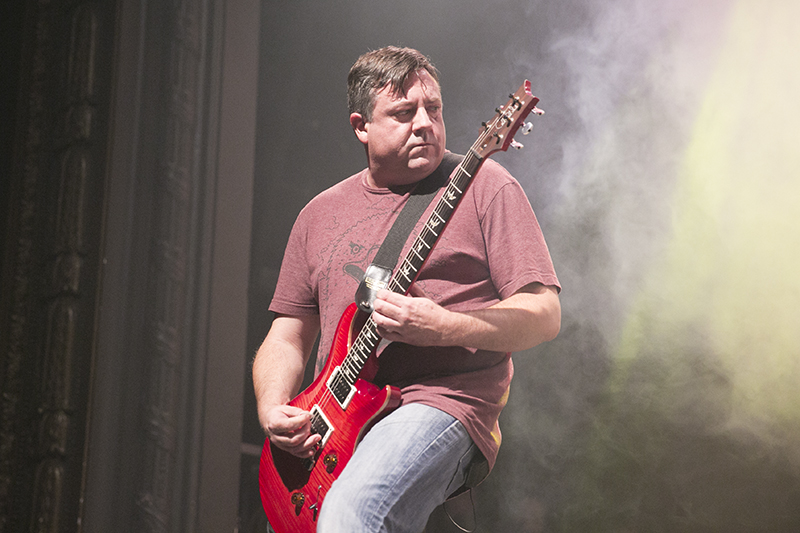 Clutch is an unassuming looking band that has done things their own way and on their own terms. With a line-up that has been intact since just about the very beginning, these guys look like they may well have met while in line to get smokes at the local bowling alley. But don’t let the low profile looks lead you to think they are anything but an epic band of relentless riff merchants that twist together guitars, grooves, and bombastic rock for their rabid fans. Navigating through a steady diet of older tunes and material off of their most recent offering Psychic Warfare, the common thread throughout is the grab you by the throat raspy howl of Neil Fallon being propped up by thick, intricate, bludgeoning blues-fueled grooves that hit like a bag of hammers. 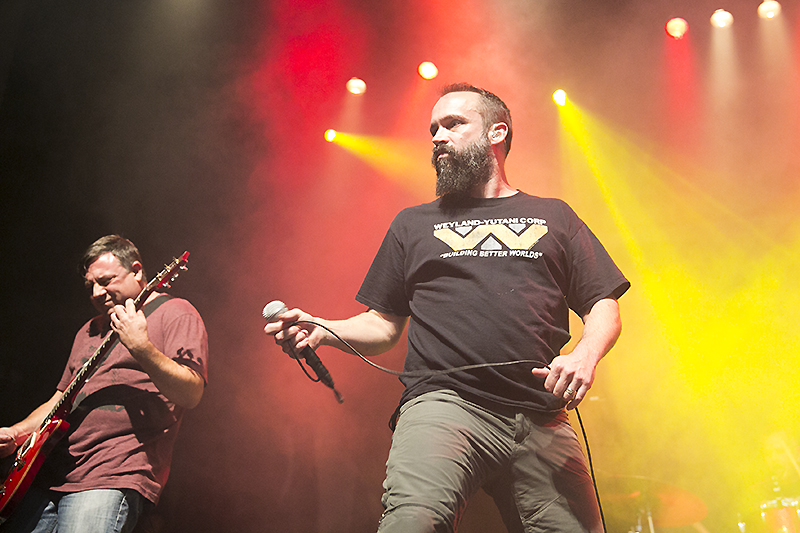 Held down by the power drumming of Gaster teamed with the technical bass punch of Maines, a first listen might lead a listener to think this band is from Texas with a bottom heavy blues roll that could bring to mind ZZ Top and even bits of Pantera. Fallon even gives a tip of the hat to ZZ Top in ‘A Quick Death in Texas’ (Psychic Warfare) stating “Please forgive me Mr. Gibbons” in between the blues rock swagger stops of Sult’s guitar mastery.

Fallon’s performance is as captivating as his commanding voice. He stalks the stage pointing and prowling like a Pentecostal preacher delivering a vocal style that is a mix of Dave Wyndorf (Monster Magnet), King Buzzo (Melvins), and even a dash of Gene Simmons (Kiss), but completely incongruent with the form from which the voice is unleashed. And Clutch fans are as heart attack serious as their heroes, pushing the band to lean in even harder. Crowd favorite ‘X-Ray Visions’ had girls and their dudes hanging over the balcony railing with fists raised as they chanted in time with Fallon “Telekinetic, dyn-o-mite….psychic warfare is real!!” 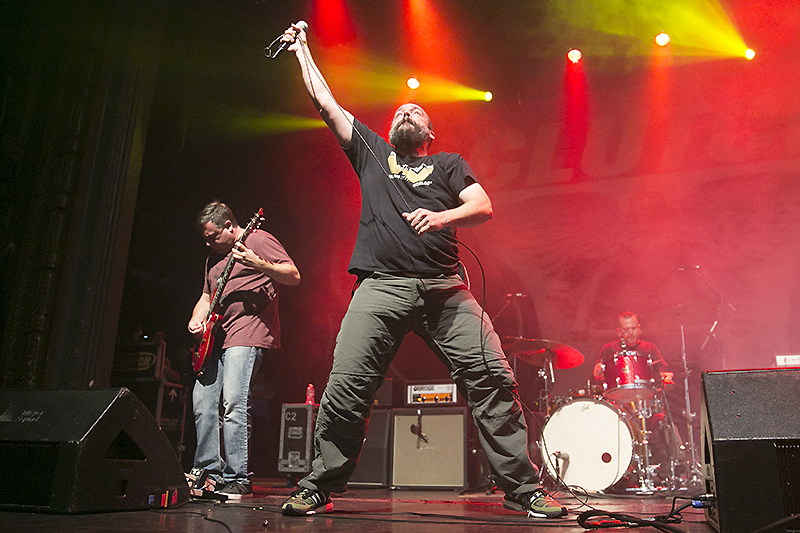 Freaks of the best kind, Clutch tore the Regency apart to the appreciation and adoration of their crowd. The final encore ‘Spacegrass’ brought things full circle back to their 1995 self-titled album and landed things on an upside down high. A psychedelic hazy mist of rock with Fallon giving his best Kool Keith stream of consciousness impression, eventually giving way to a pounding chaotic space ride that ended the night. Leaving the Regency, Clutch’s catchy riffs and Fallon’s self-introduction…..”On the microphone….Scorpio!!” echoed in my head…can’t wait to see what they come up with next. 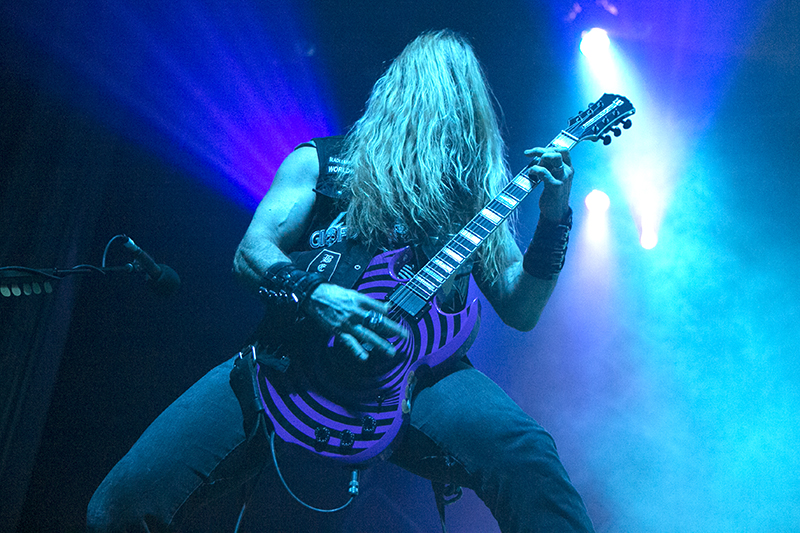 Priming the Regency before Clutch took the stage, Zakk Sabbath (led by guitar-whiz Zakk Wylde) crushed the crowd with their take on a Black Sabbath set that Wylde is all too familiar with. Wylde, most known for his work as Ozzy Osbourne’s former guitarist is perhaps the hardest working man in rock. Whether it be with his Black Label Society clan, or one of his many side projects, it seems like he is always playing. 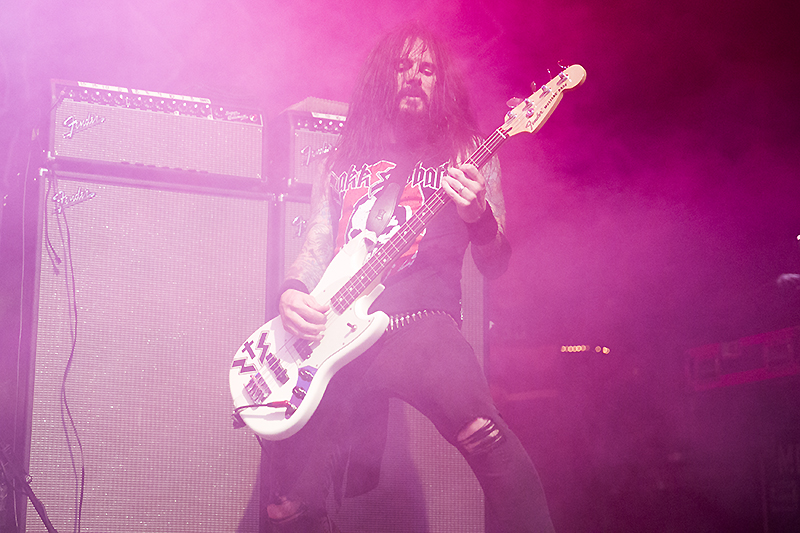 Playing a short set of heavier, more obscure Sabbath tunes, Wylde along with stellar bassist Rob Nicholson (Ozzy, Rob Zombie) and the machine-like drummer Joey Castillo (Danzig, Queens of the Stone Age) got the joint flying with the guitar gallop intro of ‘Children of the Grave’; Zakk taking double duty of vocals and guitars. 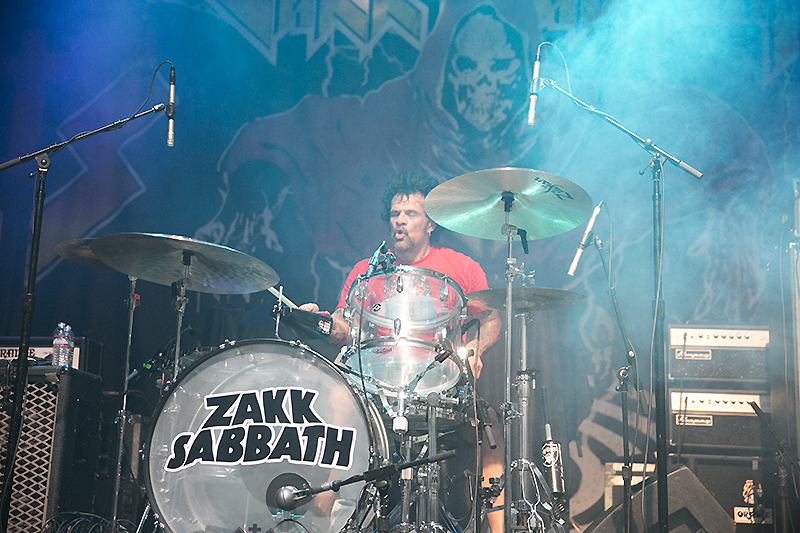 The ‘Sabbath’ part of the presentation is pretty obvious, but one might wonder what implications the ‘Zakk’ twist on things are. Well it didn’t take long to find out. Zakk went all Wylde during and in-between songs assaulting the crowd with multiple blistering, 1000-note per minute, head-spinning guitar leads to amaze and mystify. 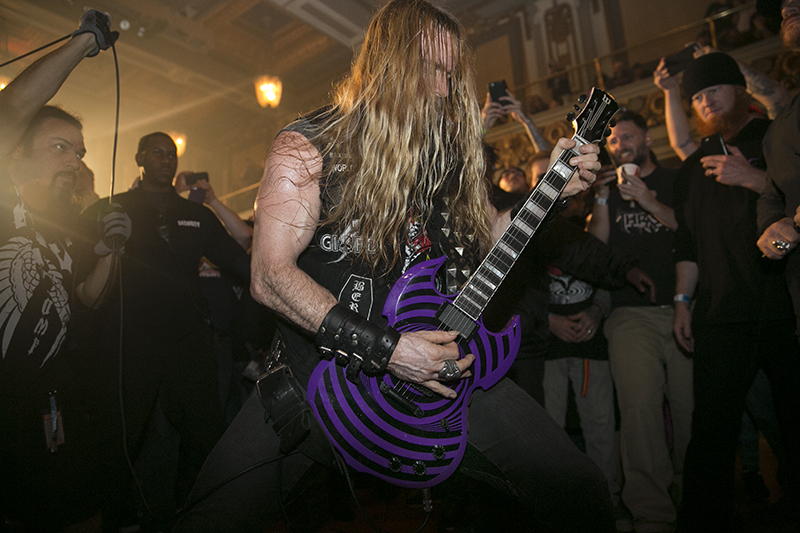 Not satisfied with performing his magic from the stage, Wylde went into the crowd and all the way to the back bar to play leads over his head and behind his back during ‘Into the Void’. The crowd circled around him as he played….more like what you would imagine for a breakdancing circle than a guitar solo. 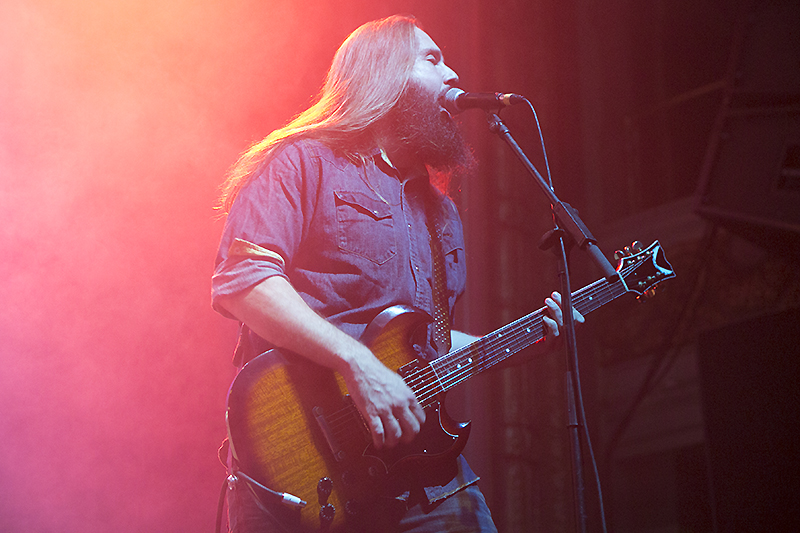 Opening the night was Kyng, the hard rocking trio hailing from Los Angeles. This is a band that is ascending, and it is easy to predict big things for them in 2017 as they support the recent release of their new recording Breathe in the Water. Kyng (Eddie Veliz – guitars/vox, Tony Castaneda – bass, Pepe Clark – drums) has all the elements to take it to the next level and beyond. They are young, hungry, very talented, have a great stage presence and strong anthemic heavy rock that makes you want to listen over and over

Setlist: Sucker for the Witch | The House That Peterbilt | A Shogun Named Marcus | Decapitation Blues | Pulaski Skyway |A Quick Death in Texas | Your Love Is Incarceration | The Yeti | X-Ray Visions | Our Lady of Electric Light | Behold the Colossus | Passive Restraints | The Mob Goes Wild | D.C. Sound Attack! || Escape From the Prison Planet | Spacegrass

For more information about Clutch, check out their website.

Everything you ever wanted to know about Kyng can be found here.