The supergroup Prophets of Rage brought their Make America Rage Again tour to the Bay Area on Tuesday night, putting on a fiery and passionate performance to an energized and raucous crowd. The band consists of ¾ of Rage against the Machine (RATM) – Tom Morello, Brad Wilk, and Tim Commerford along with Public Enemy’s DJ Lord and Chuck D, with Cypress Hill’s B-Real rounding out the lineup. If it wasn’t already apparent before the band took the stage, this was going to be a politically charged event. Each member of the group came out wearing a Colin Kaepernick jersey and then proceeded to take a knee as the Star Spangled Banner blared over the PA system. It was a show of unity with the embattled NFL quarterback and really set the tone from the outset that this was not going to just be another show. 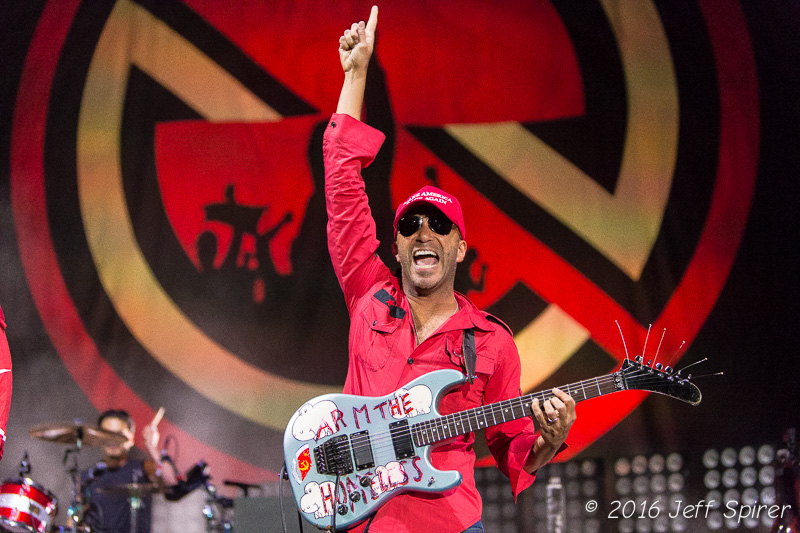 The band then roared through their opening song, a reworking of the Public Enemy staple “Prophets of Rage,” which was given a crushing and grooving treatment by Wilk, Morello, and Commerford to complement the intense rhymes from Chuck D and B-Real. Immediately after concluding the song they launched into their first Rage against the Machine song, the rousing “Guerilla Radio.” As Chuck D and B-Real again traded off vocals it became apparent just how solid this lineup sounded; they complemented and energized each other to perform at an even higher level. Morello in particular seemed totally ecstatic to be playing these songs again after so many years of inactivity (the last RATM show was in 2011) and delivered some exceptional guitar work on each song. 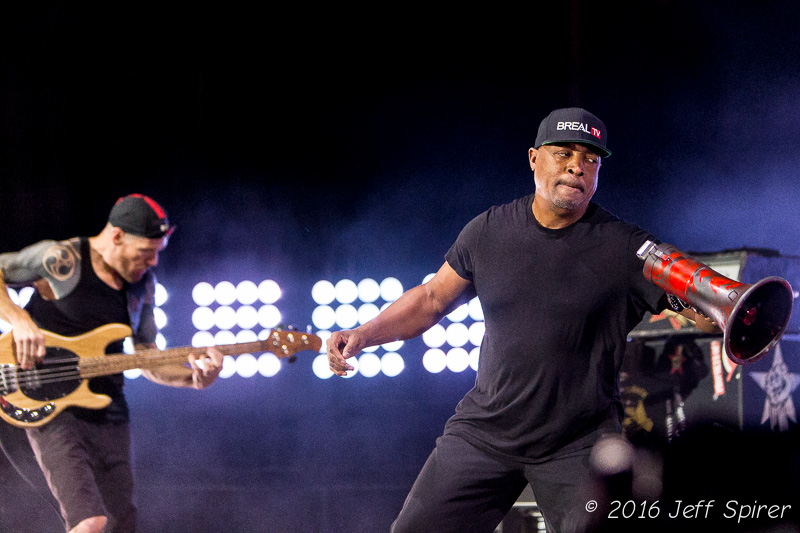 Drawing equally from the back catalogs of Rage against the Machine, Public Enemy, and Cypress Hill, the band continued to romp through their set. Towards the mid-way point in the concert they rolled out a deep cut from the first RATM album, “Take the Power Back.” Featuring poignant lyrics and technically proficient instrumental playing, the song was a perfect example of how emotionally and musically powerful this group can be. Beginning with an aggressive slap bassline and a funky drum beat, the song twists and turns for over five minutes during which Morello laid down a devastating and mind blowing guitar solo, demonstrating his immense technical skills. While many fans were no doubt disappointed at the absence of RATM frontman Zach de la Rocha, B-Real and Chuck D stepped up to the challenge masterfully in tackling his vocals, especially on this song. They may not have been able to match de la Rocha’s rabid delivery but they come incredibly close. 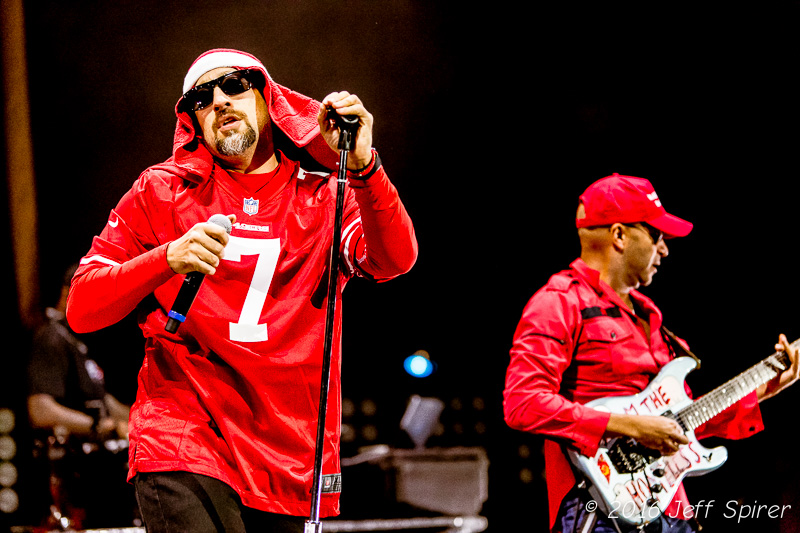 A few songs later, DJ Lord queued up a medley of Public Enemy and Cypress Hill songs as B-Real proclaimed, “Hip hop is in your face, so we’re going to get in your face,” as he and Chuck D stepped down into the audience and began to rap the famous Cypress Hill song, “Hand on the Pump.” For the next ten or so minuets the two continued to spit out ferocious lines directly into the faces of the audience as security tried to keep the fans from getting too wild and crazy. 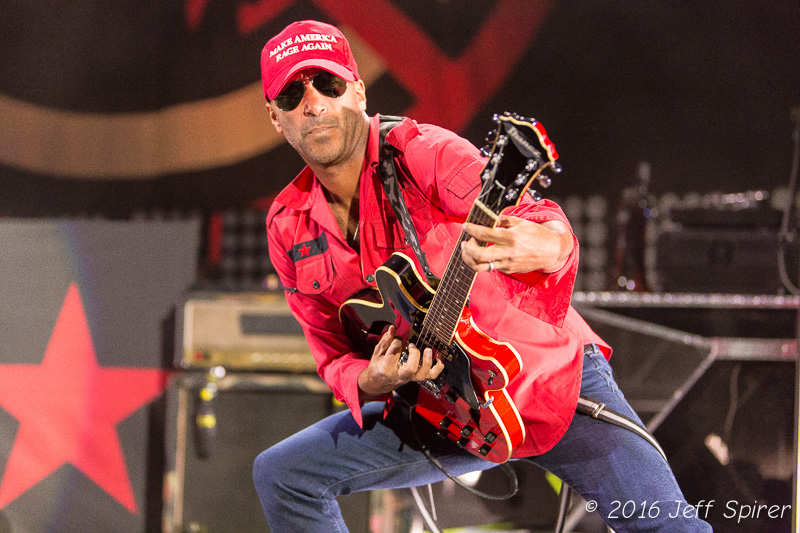 Just when the two came back on stage, Morello reappeared to rip into the opening of “Sleep Now in the Fire,” one of the most incendiary tracks from the RATM catalog. After this, Morello stepped up to the mic to tackle lead vocals on the Springsteen classic, “The Ghost of Tom Joad,” dialing back the aggression and intensity significantly. Morello did a fine job, managing to capture the rugged and tough spirit of the original without sounding like a total copycat. A few songs later the band delivered an inspired cover of the Beastie Boys’ “No Sleep Till Brooklyn” mashed up with the lyrics to one of Public Enemy’s most well-known songs, “Fight the Power.” The mash-up worked surprisingly well as the steady rock song mixed with Chuck D’s indelible vocal prowess. 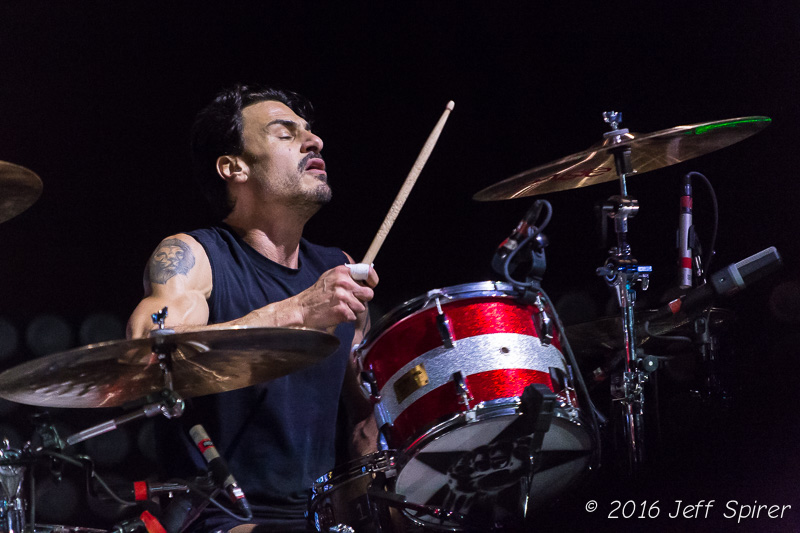 Fittingly, Prophets of Rage closed out the concert with two of the most potent songs in music history, “Bulls on Parade” and “Killing in the Name.” Both songs are legendary RATM songs that kicked the crowd into overdrive once they began. B-Real showed his talents on these songs as he absolutely nailed the kind of delivery that Zach de la Rocha once used, particularly during “Killing in the Name.” In true revolutionary fashion, B-Real changed the lyrics midway through the song, declaring, “some of those who hold office are the same that burn crosses”. 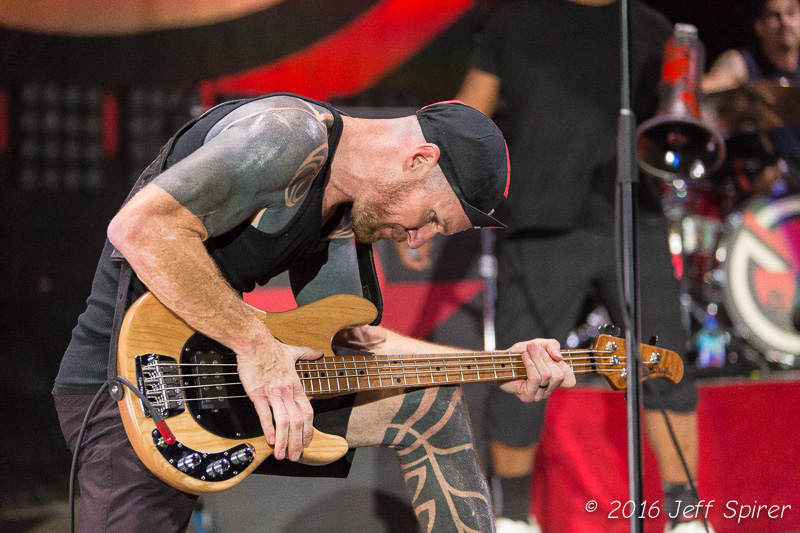 Overall, Prophets of Rage performed a masterful set that had an interesting blend of music that held the rapt attention of the audience, and both B-Real and Chuck D more than made up for the absence of Zach de la Rocha; in fact they seemed to breathe new life into some of these songs, particularly on the reworkings of classic Public Enemy and Cypress Hill tracks. These types of performances really made the show memorable, and these performances also helped to spread the band’s anti-establishment socio-political stance in grand fashion. 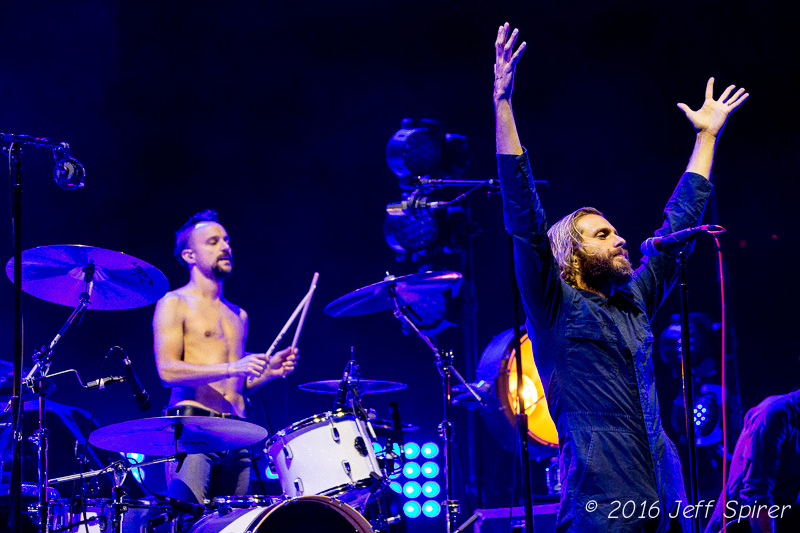 AWOLNATION took the stage before Prophets of Rage. While best known for the electronics-driven hit song “Sail,” the band showed they were capable of pure hard rock on stage. Frontman Aaron Bruno, clad in a blue jumpsuit, delivered often harsh vocals over the band’s steaming guitar from a manic Zach Irons, keyboardist Kenny Carkeet, bassist Marc Walloch, and a frequently standing Isaac Carpenter on drums. Carpenter took a rousing solo towards the end of the set, which ended with that big hit. The band was impressive way beyond their radio play.

Here’s a slideshow with more photos by Jeff Spirer of Prophets of Rage and AWOLNATION:

Setlist: Prophets of Rage | Guerrilla Radio | Bombtrack | Cochise / She Watch Channel Zero?! | People of the Sun | My uzi Weighs a Ton | How I Could Just Kill a Man | Take the Power Back | (Rock) Superstar | Testify | Hand on the Pump / Can’t Truss It / Insane in the Brain / Bring the Noise / I Ain’t Goin’ Out Like That / Welcome to the Terrordome / Jump Around | Sleep Now in the Fire | The Ghost of Tom Joad (Bruce Springsteen cover) | Bullet in the Head | Shut ‘Em Down | Know Your Enemy | The Party’s Over | No Sleep Till Brooklyn / Fight the Power | Bulls on Parade | Killing in the Name

Find out more about Prophets of Rage on their website.

Get more info on AWOLNATION here.