In a genre that has had its artistic integrity diluted by lyrical content about rims, gold grills, sexual conquests, the drug or drink ‘flavor of the month,’ and often grunting gibberish, the architects of hip-hop refuse to relinquish the reigns. In an age where anyone with a laptop, a microphone, and auto-tune is oversaturating the market, the pioneers that hit the street with artistic labors of love & messages that contained social consciousness captured on 2” reel-to-reel tape are still in power. 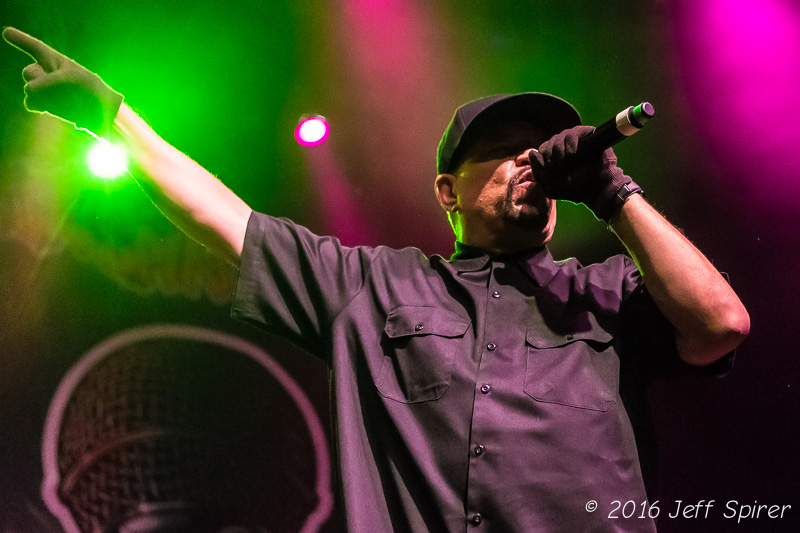 Tracy Marrow, better known as Ice-T is the mastermind behind the annual festival spawned from his 2012 documentary film of the same name, ‘The Art of Rap’. The documentary debuted at the Sundance Film Festival and the fervor generated as a result birthed the idea to turn the documentary into a live music festival including the pioneers of the genre. While last year’s inaugural tour was an outdoor affair at Shoreline Amphitheater, featuring a lineup stretching an entire day & evening headlined by Bone, Thugs, & Harmony, this year’s lineup was pared down a great deal and moved into more intimate venues on some dates. 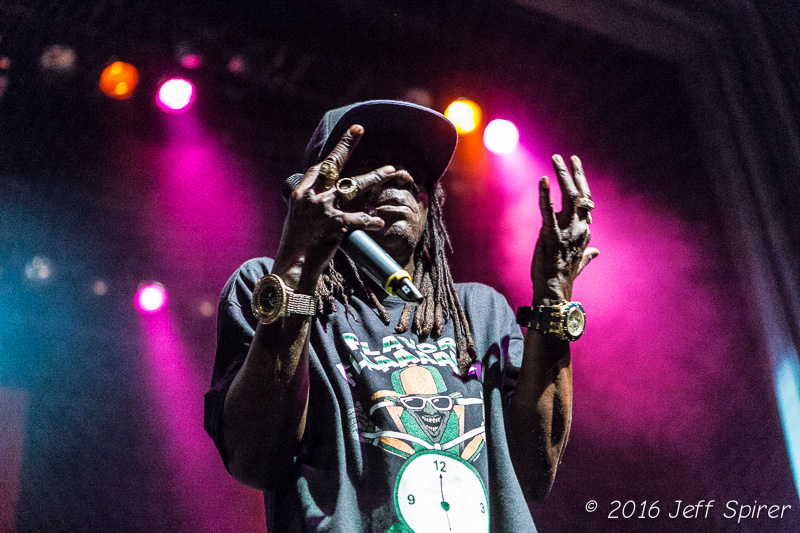 Public Enemy boldly wears the crown of headliner this year as the festival moved indoors to San Francisco’s Regency Ballroom for its Bay Area pit stop. PE Co-Founder and the most infamous hype man in hip-hop history Flava Flave stormed the stage flanked by Professor Griff, the S1Ws, DJ Lord, and most impressively a live band. Flave warmed-up the house with a solo tune before hip-hop’s most socio-politically-charged MC Chuck D sounded the alarm and busted right into “Show ‘Em Whatcha Got” from 1988’s “It Takes a Nation of Millions to Hold Us Back.” 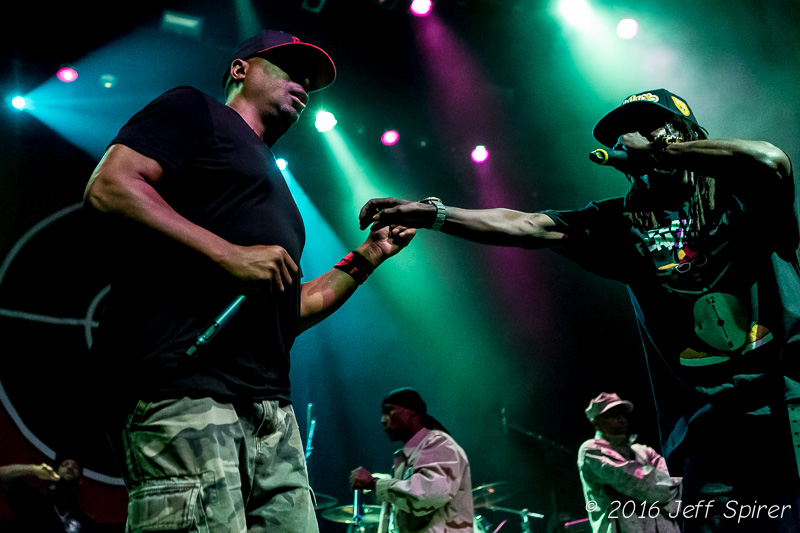 Fast forward to 2016 and Flave has traded in his trademark giant clock adorning his neck & sideways baseball hat for long dreads and a couple of oversized blinged-out watches. With his new single sounding like and his appearance looking like he’s been spending more time with Lil Wayne than the original crew from Long Island, his antics and stage presence were up to par for certain. At one point he even donned the bass and played along to a tune and demonstrated his funk slap skills on the four-string. 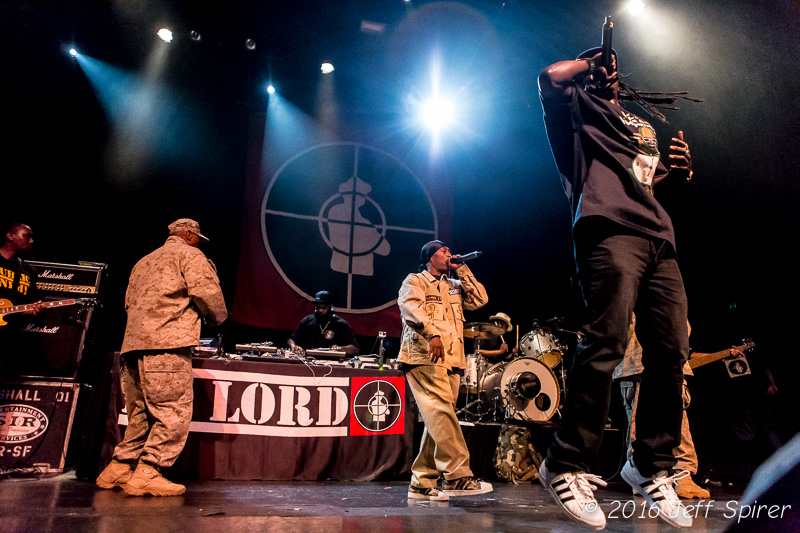 The crowd this evening was a myriad of races, ages, and socioeconomic backgrounds. This was a proven point that hip-hop crosses boundaries and unites. Chuck D kept peeling off hit after hit, making it feel like it was one big ‘Yo MTV Raps’ reunion. “Welcome to the Terrordome,” “Bring the Noise,” and “Don’t Believe the Hype” threw the crowd into a sing-along frenzy as Chuck D commanded the stage like the Tasmanian Devil, swinging his microphone like a samurai slaying the audience, which is exactly what he was doing. The icing on the cake this evening was the live band PE traditionally uses. Live guitar, bass, and drums added a special element to the classic hits and also proved that PE reigns supreme. No auto-tune needed. 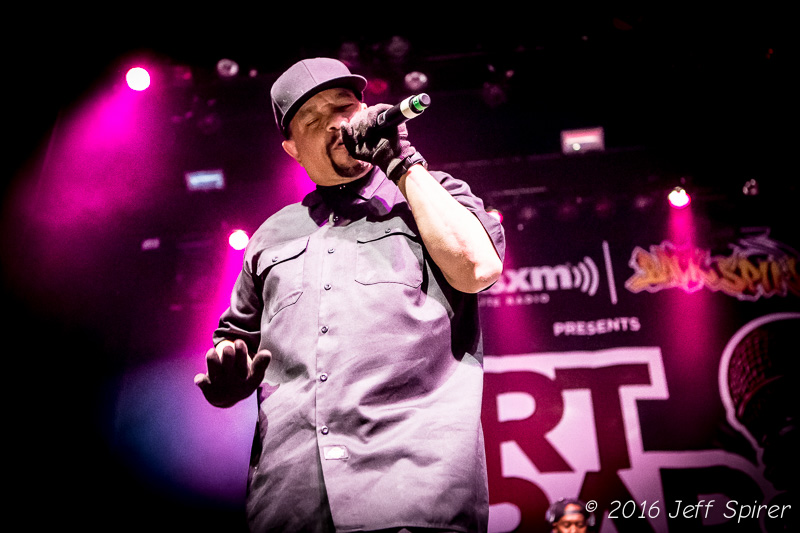 Tour founder Ice-T pulled zero punches when his time came to take center stage. Although jovial at times, he seemed determined to prove something this night. While he may reside in a plush mansion far from his days of waving a blue rag in the streets of South Central Los Angeles, there is still a great deal of “street” left in the 54-year-old. Before busting into “O.G. (Original Gangster)” he proclaimed to the crowd “I’m a damn good actor. I’ve been fooling these motherfuckers on SVU (NBC’s Law & Order: Special Victims Unit) for eighteen years now! I’m the furthest thing from a muthufuckin cop you’ll ever meet.” 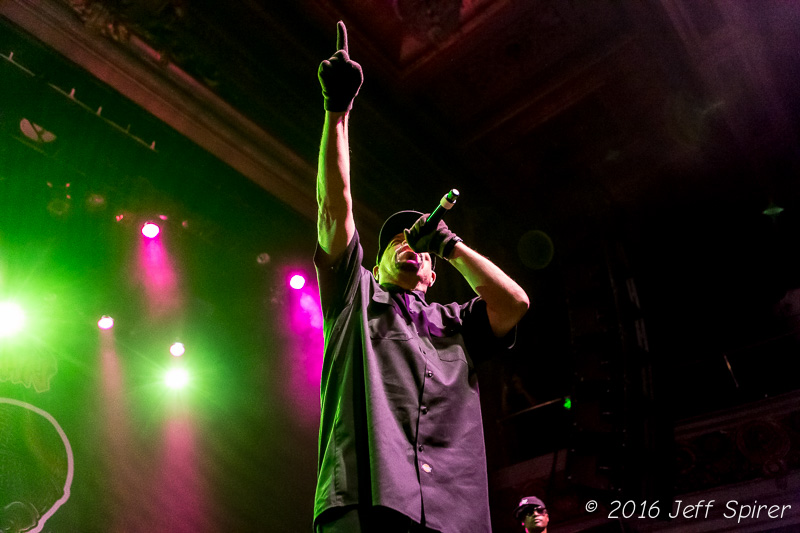 The energy of “New Jack Hustler” was at a peak with Ice parading the stage draped in signature all black Dickies pants & work shirt, baseball cap, and gloves. His delivery was smooth as ever, still lyrically sharp as a razor blade. Ice had lots of love to give the Bay Area this night with shouts to his peers Mac Mall, respects to the fallen Mac Dre, and Vallejo’s kingpin of ‘The Yay Area’ E-40. He even shared a story that San Francisco is where he made his live debut as a rap artist. He said after “6 ‘N the Mornin’” single was released and started getting some attention he was asked to come to do a show at The Fillmore. The show ended up a sell out and he was asked if he’d stay & do a second night. He’s had a special love for the Bay Area ever since. Before making his exit stage left he’d deliver his 80’s anthem “Colors” to sea of heads bobbin’ and singing every word. 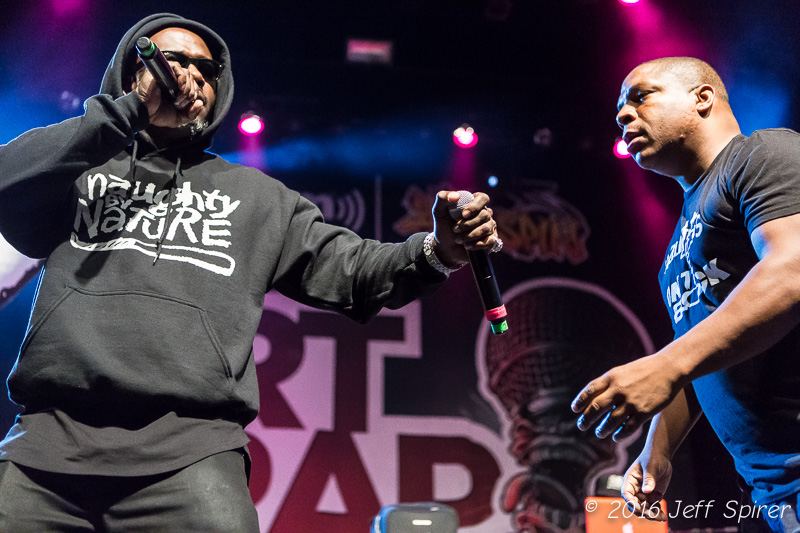 New Jersey’s “naughty, nappy, nasty” crew Naughty By Nature got the crowd moving from the giddy-up with chart-topper “O.P.P” and the crowd immediately responded giving back every ounce of energy that was being delivered from the stage. Treach and Vin Rock traded verses and crowd hyping duties with Swiss watch-like precision. Treach possesses a machine-gun delivery style and spits his rhymes with a fury in which every lyric is emphatically delivered. 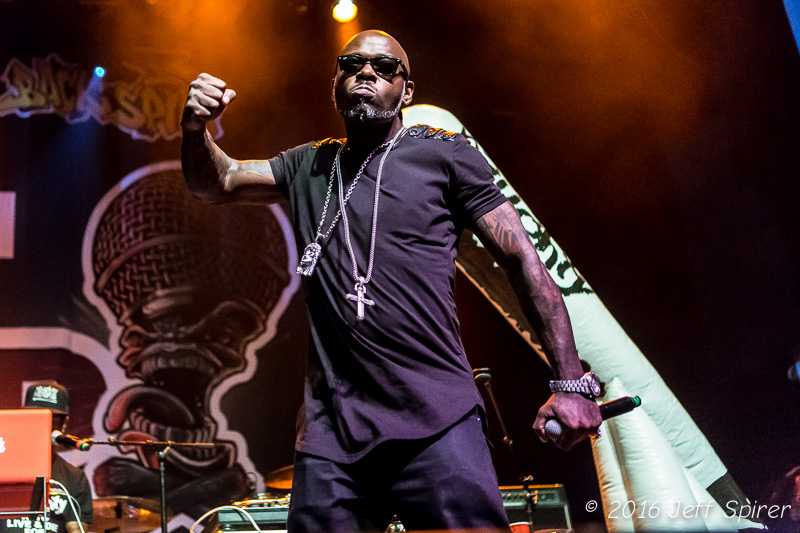 Vin & Treach did a stellar job of intermixing verses from popular hip-hop classics with their originals such as “Feel Me Flow” and the anthem of a ghetto bastard, “Everything’s Gonna Be Alright”. The duo polled the audience asking “Who wants to go back in a time machine? What was your favorite year in the 90’s?” The crowd response was surmised as Vin said “Let’s take it back to “19 Naughty III”, referring to their 1993 sophomore album when DJ Kay-Gee kicked off their biggest hit “Hip Hop Hooray”. Their set culminated with Vin delivering a power message of positivity telling the audience to throw a heart in the air while gesturing the same and saying “I love myself” several times while imploring those to love themselves, love each other, and support one love. 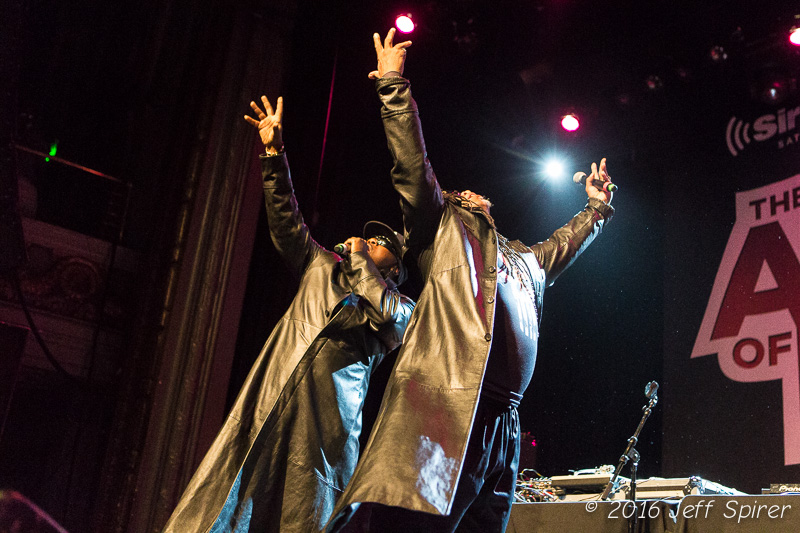 In the most proper fashion paying homage to the roots of hip-hop, Grandmaster Flash and the Furious Five’s Grandmaster Melle Mel & Scorpio got the party started. As one of the first rap groups to ever be recorded back in 1979, these two were part of the movement that founded not only a musical genre, but also gave birth to an entire culture, hip-hop. They combined old school B-Boy choreography with hits like rap’s most popular song of all-time “The Message” and “Scorpio” while also belting out hip-hop classics from other artists. Melle Mel still sports his trademark mounds of muscles and slides across the stage like it was the summer of ’79 back in the Bronx.

Set List: Show ‘Em Whatcha Got / Rebel Without a Pause / Welcome to the Terrordome / Night of the Living Baseheads / Black Steel / Bring the Noise / Don’t Believe the Hype / Can’t Truss It / He Got Game / 911 Is a Joke / Man Plans God / Fight the Power / DJ Lord solo / Shut ‘Em Down

For more information about Public Enemy, see their website.