Prism Bitch packs a powerful punch. Sporting a blue stripped track suit, vocalist Lilah Rose collapsed to her knees, her feet pressed against her back as she violently played guitar on the floor. Bassist Lauren Poole, in matching yellow joggers, screamed into the mic before kicking the air Chuck-Norris style. The energetic band dominated the small stage at Oakland’s Eli’s Mile High Club — a legendary blues bar turned punk/metal dive, which was once so popular the Rolling Stones were turned away by the doorman. 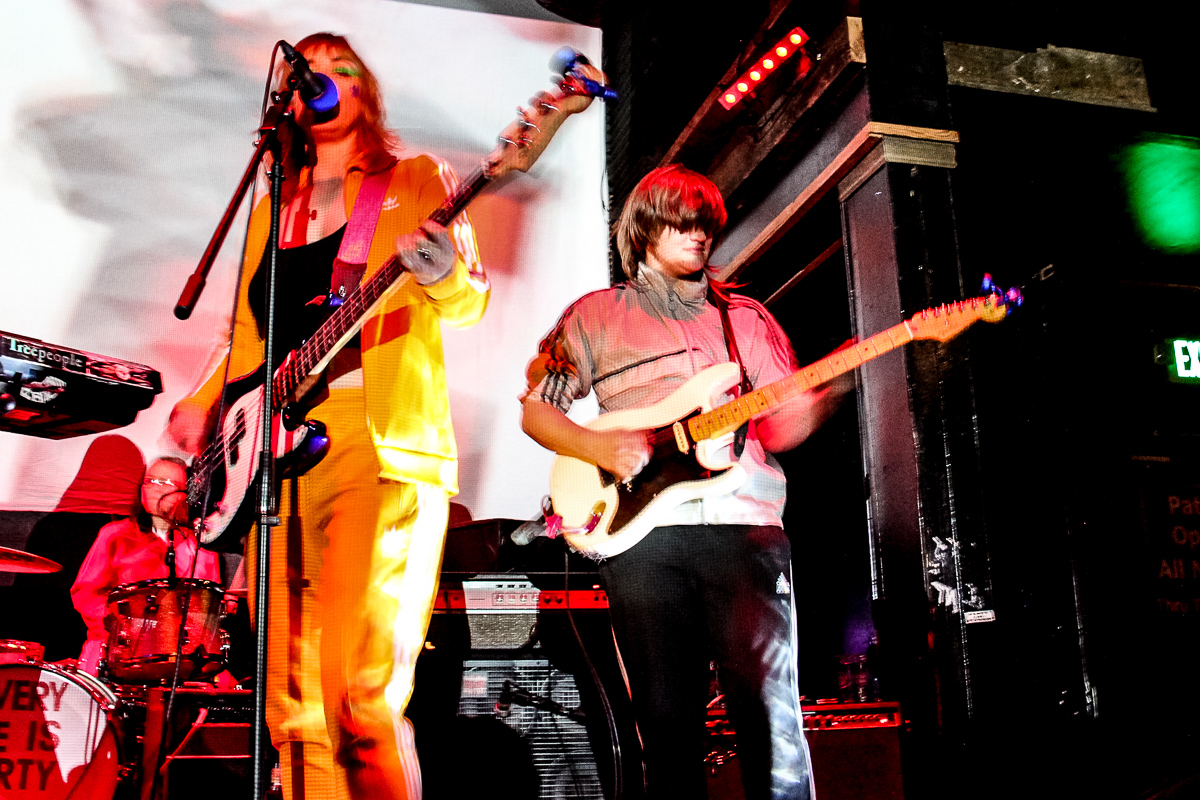 It’s the perfect venue to showcase Prism Bitch’s unhinged spirit. Playing tracks like “You Got What I Want” they eased the crowd in with duel harmonies — both Rose and Poole have a stunning set of pipes. Rose, who is a striking image of Jenny Lewis, danced behind her keys, headbanged, and threw her hands in the air, making robotic, doll-like expressions. Then Poole took the lead, and one-by-one each band member started unravelling. 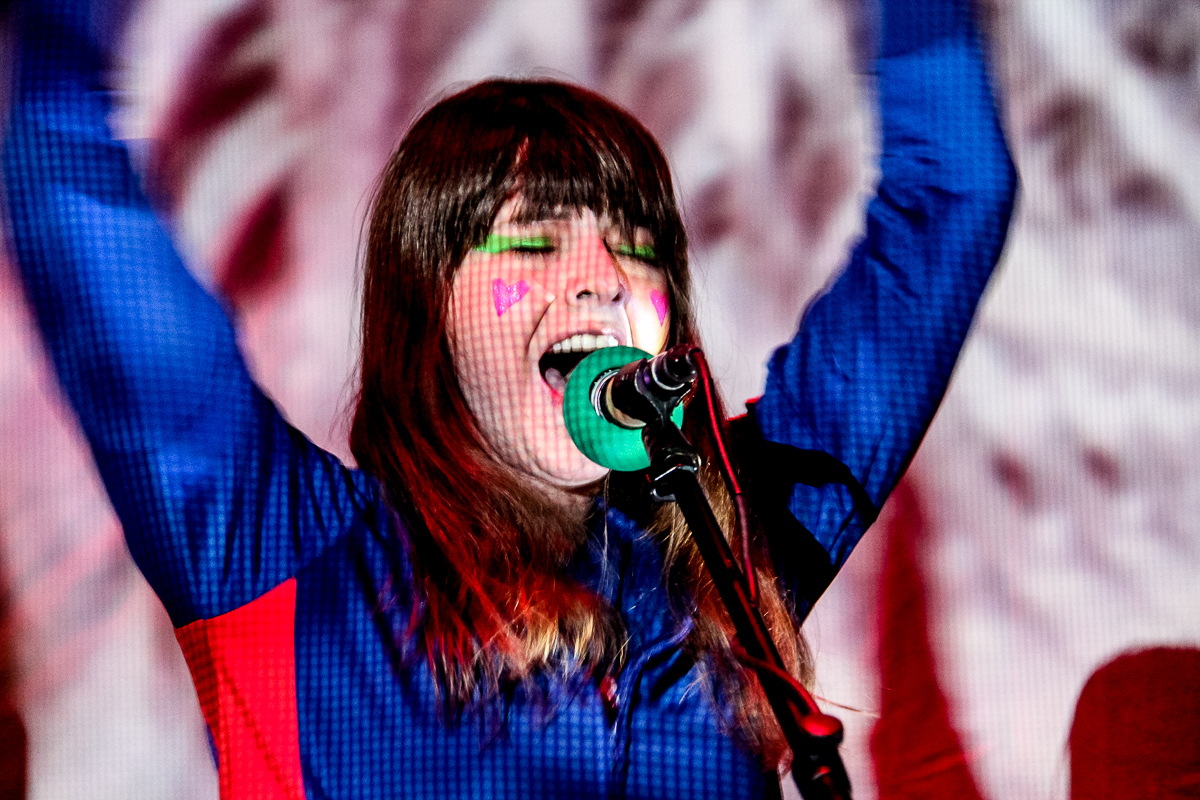 “Eli’s rules,” Rose said. “It was awesome playing with Everyone is Dirty. The projections by Matt Robeson (of White Light Prism) were on point, and the crowd was responsive in many beautiful ways.”

Admitting it’s a shame that tour doesn’t allow much time for exploration in new cities, Poole is eager to get back to Oakland’s rich “artsy weirdo” scene. In the meantime, the band plans on bringing something different to every show they play, honoring each member’s uniqueness, and spreading love and light.

“Be yourself. Be a friend to others. Love one another and seek kindness in each other,” Rose said. “Rock music doesn’t mean you have to look cool or act like an asshole. Run together, be there for humanity, and help in any big or small way you can.”

Between spastically shredding her guitar and leaping across the stage, Rose stood atop Teresa Esguerra’s bass drum, and held up a sign reading “love.” Esguerra anchored the chaos, while Nelson Crane (newest member) and Chris Walsh exuberantly played their guitars. It was so obvious everyone was having fun and it filled the small, dark room with color and light. 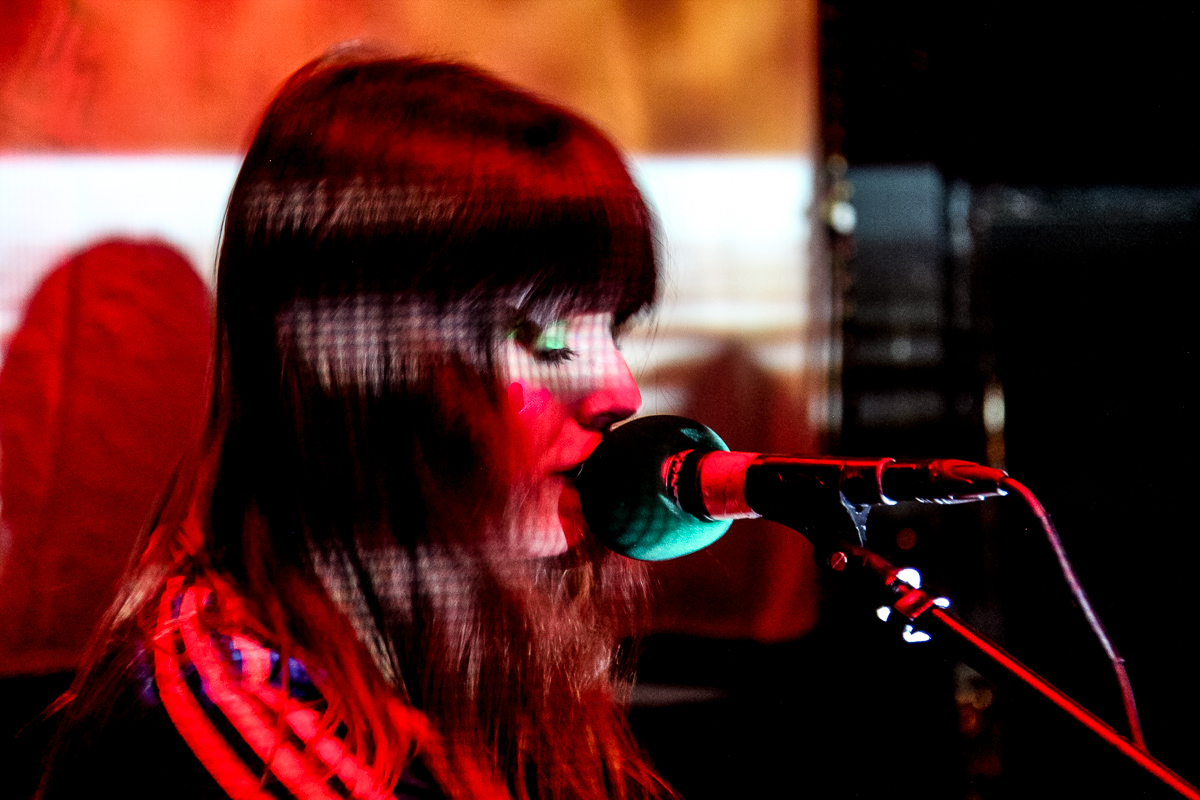 The self-proclaimed “soul punk bitches” hail from the New Mexican desert. They mix heavy guitar and keyboard layers with a blend of pop hooks, melodies, and harmonies. They’re inspired by artists like Yeah Yeah Yeahs, Talking Heads, B52s, and The Pixies, but don’t subscribe to one genre. Pulling from different influences helps them surprise each other — Rose loves pop punk, Poole is into new wave, Esguerra was raised on Pantera and Ratt, Crane digs Butthole Surfers, and Walsh pulls from lots of contemporary hip hop.

At the start, they were just a bunch of performers out to write a play about inmates (they were previously called Prison Bitch) who were being exploited by the warden. They wrote music to accompany the act and started playing in full costume and character. It wasn’t long before they ditched theatre and started a band (with a slight name change). 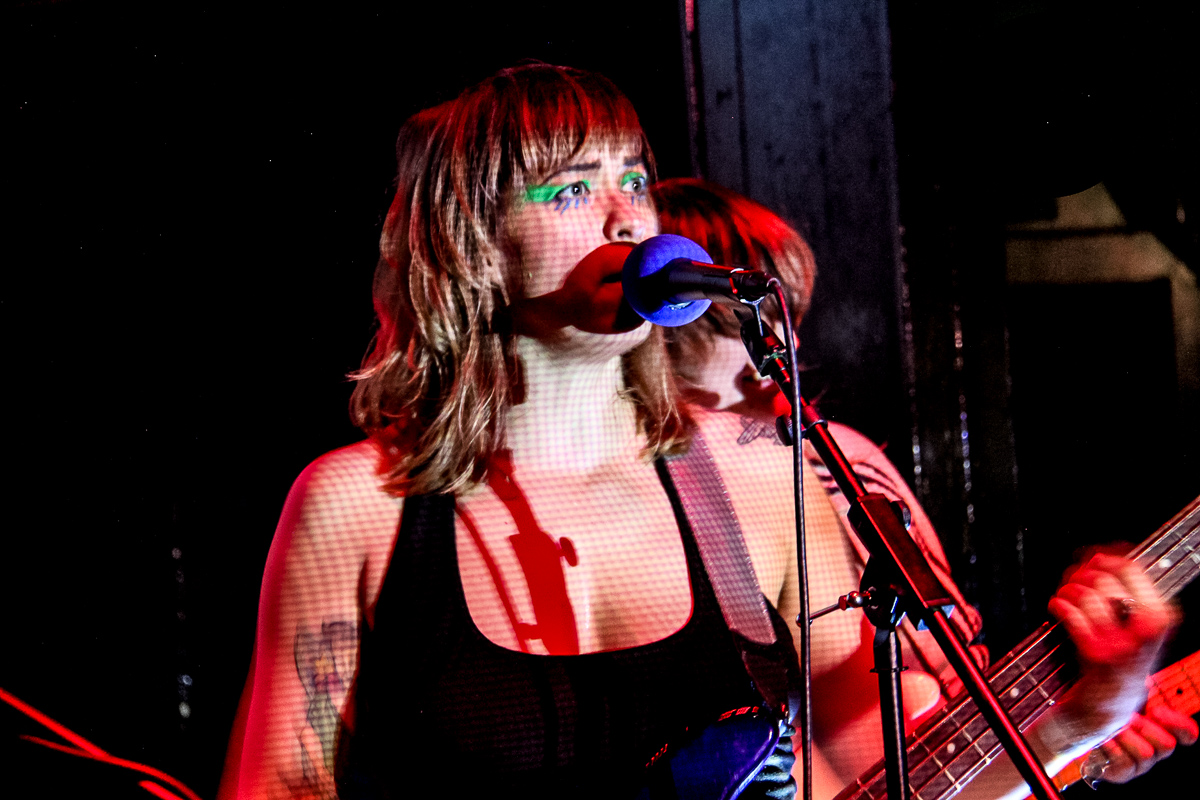 And they’ve come a long way. Earlier this year, they shared a bill with indie icons Built to Spill at Slim’s in San Francisco. 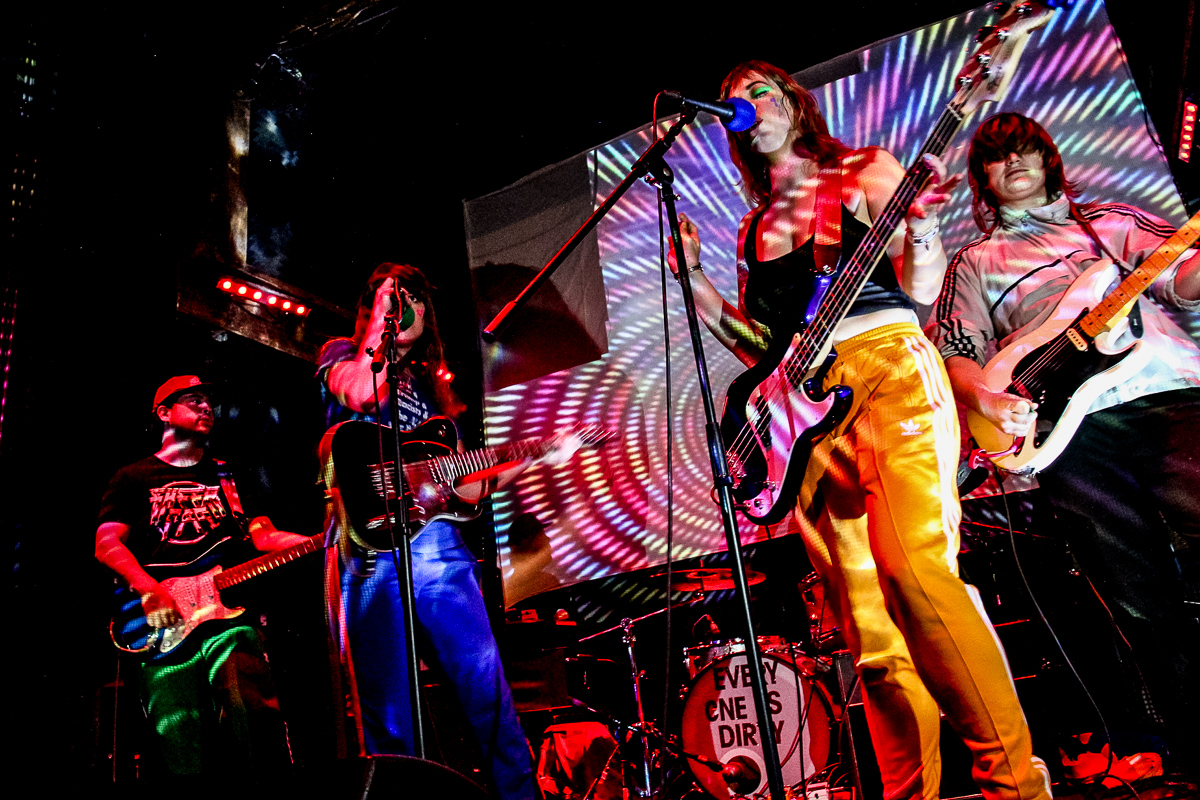 “It’s been eye opening to watch such dedicated musicians making meaningful music that connects deeply in their fans,” Rose said. “We strive to create this same effect.”

What’s next for the rambunctious fivesome? You can check out their set at SXSW in March. They’ll be the vibrant, rowdy ones promoting love and equality. 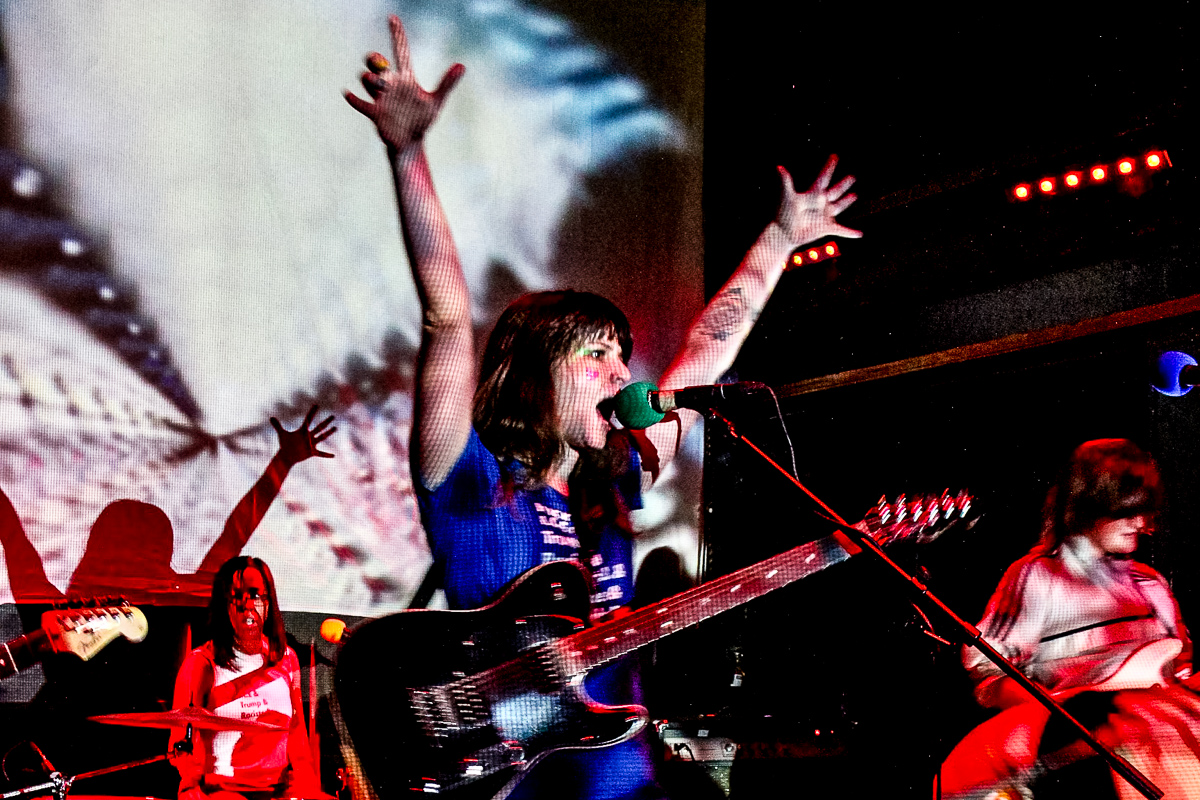 “Our world faces so much turmoil, we want to use the stage and our presence to uplift people,” Rose said. “[We want to] let you know we’re your buddy, and that love is way cool.”

For more information about Prism Bitch, see their website.