The politically-charged amalgamation of metal, punk, and hardcore — better known as Power Trip — recently brought their anarchic energy to Great American Music Hall in San Francisco. Fans thrust themselves into the stage, devouring vocalist Riley Gale, and taking part in the raw, aggressive experience unfolding before them.

The floor opened up. People circled the pit, hardcore danced, headbanged, moshed, stood on the outskirts, threw their fists in the air, and sang along. Shirtless, sweaty men slid off each other’s backs while girls pushed and shoved their way through the chaos. A tall, thin man stood center-pit, grabbed his long, frizzy curls, and yanked his head into his knees. Dozens of fists and legs swirled around him. He remained unscathed.

Just like its lyrics and sound, it seems violent to an outsider. But underneath, it’s about resisting, expressing yourself, and taking care of each other.

Power Trip advocates for the underdog. Their set is anti-establishment, anti-war, anti-sexism, and anti-racism. It says fuck you to nationalism and corporate America, stands up for marginalized people, and promotes free thought. 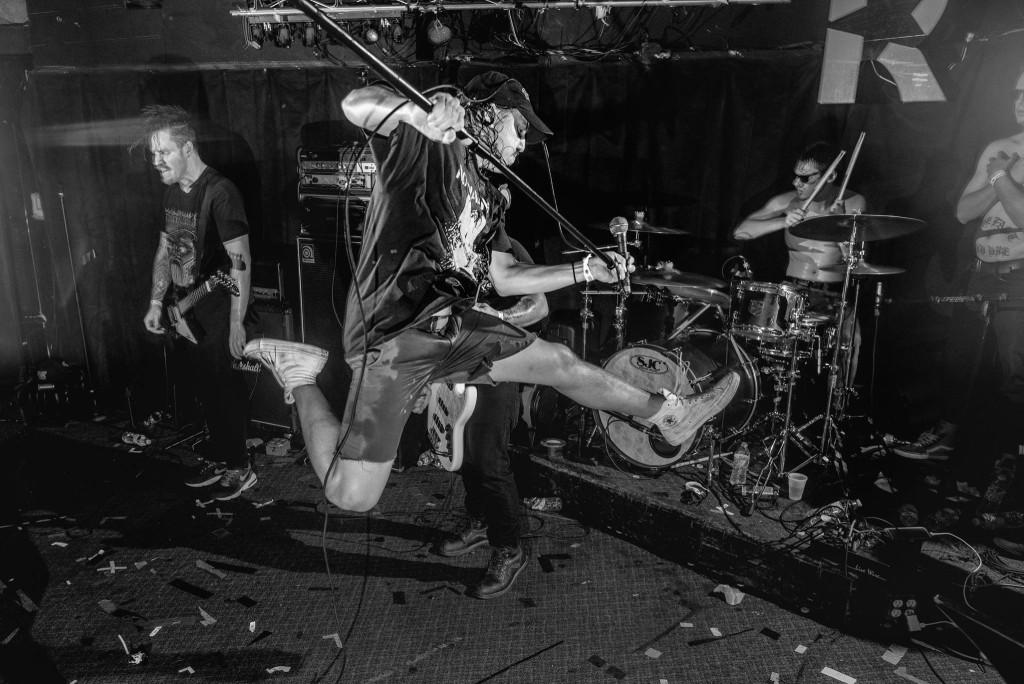 The band’s uncompromising egalitarian backbone is the driving force behind Gale’s lyrics and their fast, unforgiving, thrashy sound. It’s nearly impossible not to headbang along to the relentless riffs protruding from guitarists Blake Ibanez and Nick Stewart. With Chris Ulsh on drums and Chris Whetzel on bass, all five members draw from their unique and eclectic music tastes — from D.R.I. to Nuclear Assault, ZZ Top, Slayer, and, yep, even Al Green.

The Dallas band draws fans from across the extreme music spectrum. In the process, they bring back the feel of 80s Bay Area thrash yet simultaneously they release records that feel innovative. They’re aggressive, raw, and undeniably fun.

Producer — and honorary sixth member — Arthur Rizk helped the group record their second album, Nightmare Logic, which was released in 2017. The record is all of 30-minutes long, but is shorter, faster, and heavier than their first studio album, Manifest Decimation. Rizk worked on Code Orange’s Forever and is legendary in bringing back a crisp, nuanced sound. The band also just released Opening Fire: 2008-2014, which compiles their extra tracks.

Straight out of 1985, Gayle spin-kicked off speakers and dragged his mic stand across the stage, lifting it over the crowd. People went ballistic when they played “Soul Sacrifice,” “Executioner’s Tax,” and “Firing Squad,” off Power Trip’s latest album. Thick vibrations flooded the floor, crawled up the walls, and lit the swarm of amped up diehards on fire.

They touched on some old tracks, like “Drown” and “Manifest Destination” off their first record, as well as some goodies, like “Divine Apprehension,” off their latest release.

It’s no surprise that Power Trip likes a really good riff and a well-written song. They keep it primal, simplistic, catchy, and fun. But it doesn’t mean they lose any lyrical substance along the way.

“It’s a weird line — symbolic violence and physical violence,” Gayle said in a BangerTV interview. “I think [our lyrics]always tie back into the real world . . . Maybe it’s time to drag these assholes [of power]into the streets and take away their privilege.”

Most of Gayle’s lyrics were written before Trump took office. And he titled their latest album after hearing the term dream logic — when you can’t differentiate between what is real and what is fake. Gayle felt stuck in a nightmarish world, and making powerful, intelligent, pissed-off music helped him navigate through the day and remain optimistic.

The fans could feel that energy. And they ate up every last bit of it.

When everything was said and done, the band left the stage, only to appear again to appease 400 screaming people. Before closing with “Crossbreaker,” Gayle dedicated the song to two dear friends who died that afternoon, his pals Bear and Liz.

Just like Power Trip can’t be put in a box, neither could their openers.

Red Death, a DIY hardcore band out of Washington DC, opened the show and set the tone for the night. Their face-punch racket is more in line with hardcore/thrash crossover, though their aggressive, humanist force would have made their DC punk/hardcore predecessors proud.

Hailing from Orange County, Fury kept the energy alive. Vocalist Jeremy Stith trudged across the stage in blue jeans and a salmon button-up shirt. He didn’t look the part but delivered some gnarly, hoarse vocals that kept the crowd wanting more.

And then there was Sheer Mag, who’ve been described by Rolling Stone as,“a gang of punks with a not-so-secret love of seventies classic rock.” The Philadelphia band celebrated their last night on tour with a fiery retro set. Vocalist Tina Halladay belted out tunes about gentrification, voting rights, equal pay, and discrimination. They brought some pelvis-thrusting force, which was a sweet surprise before Power Trip took everyone to the dark side.