Two of the Kings of Latin pop, Enrique Iglesias and Pitbull, recently co-headlined a show at Golden 1 Center in Sacramento. The results were a packed house, nonstop dancing and a satisfying night of hits from these pop giants.  Both entertainers are huge in the Latin music world and have fared better than most in the US – not just with music, but in TV and film as well. So, when they decided to team up on the “Enrique Iglesias and Pitbull Tour!” (exclamation point intended!), it was a treat for their fans to get both in one night. 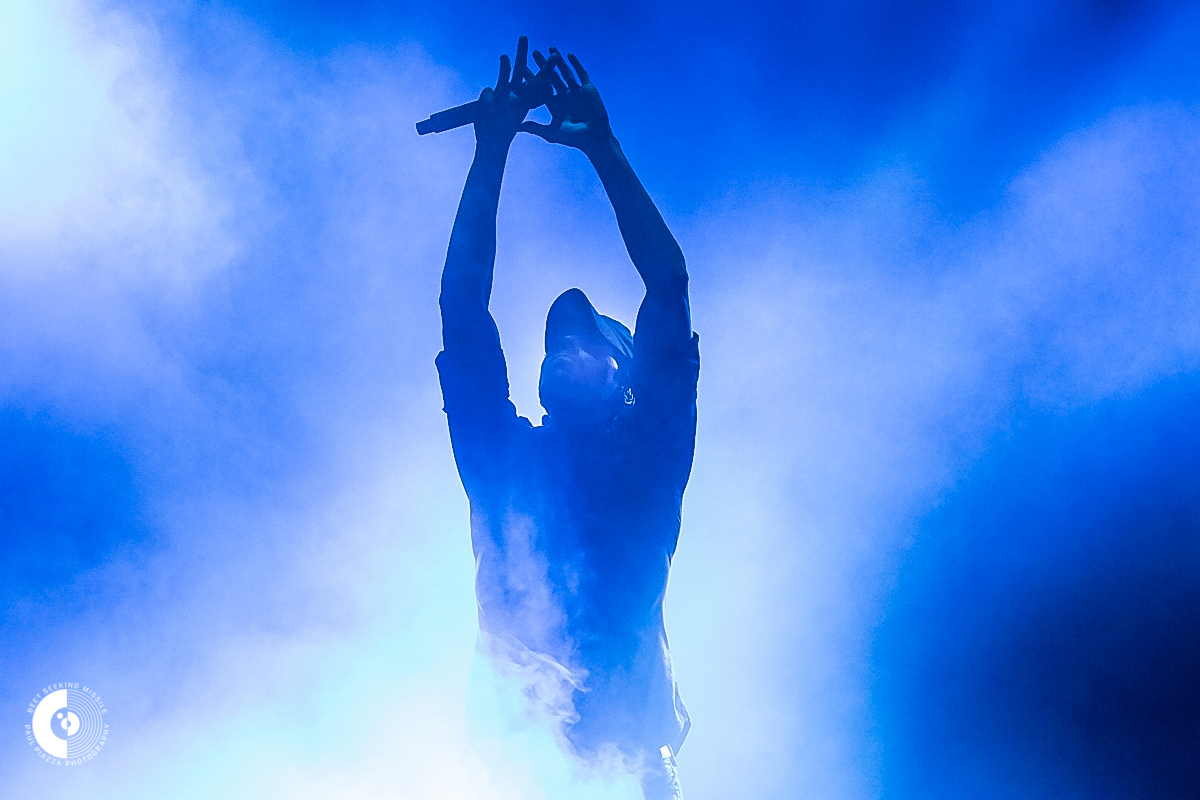 The pair show a contrast in styles. Pitbull is the compact, sharp-dressed Cuban rapper who hits the stage like a prizefighter, unleashing a fury of high-energy dance moves and recognizable hits with rough edges and big beats. Iglesias, the son of international superstar Julio Iglesias, has a smoother side. While he too can reach the crowd with the high-energy numbers, he inherited a smoother, seductive crooning side from his father. 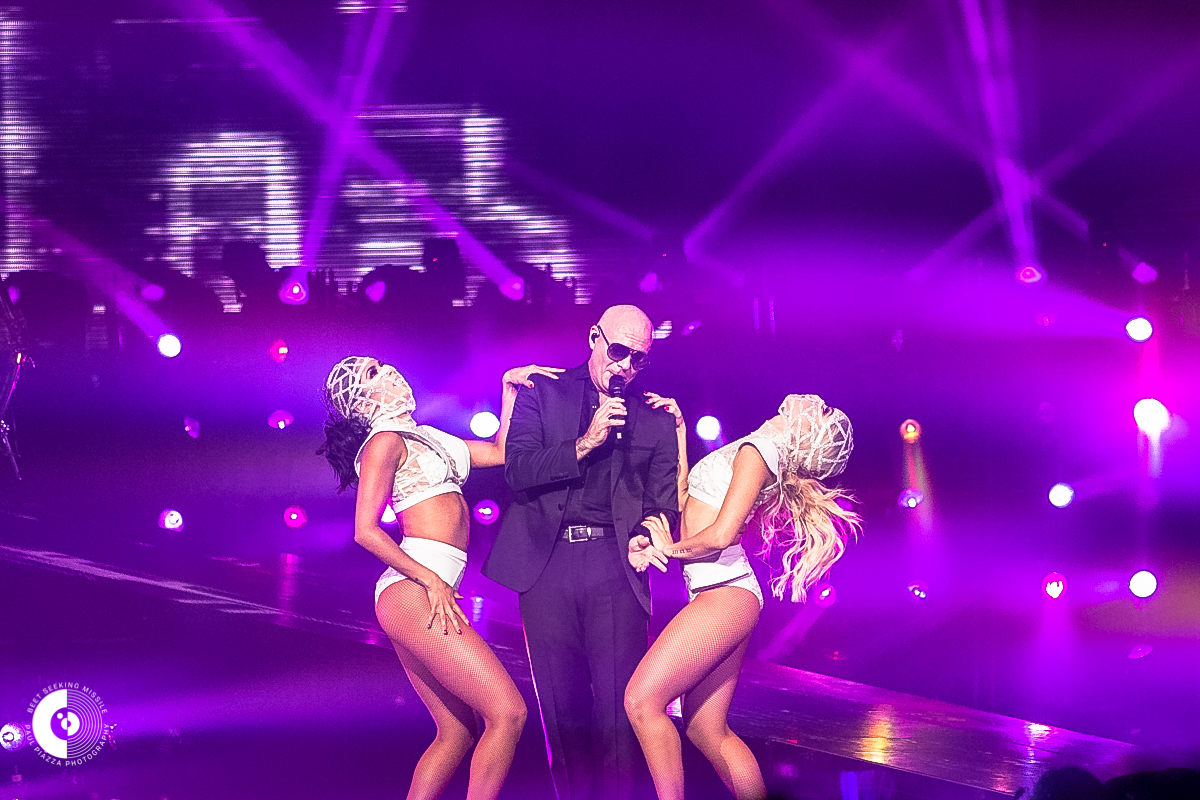 Pitbull was up first and “Mr. Worldwide,” as he is known to many, came out banging on all cylinders. He had a hotshot band, which at times whipped out snatches of AC/DC and Lenny Kravitz songs. He also had a cadre of mysterious masked backup dancers who followed him up and down the long runway that jutted from the stage to the middle of the arena. 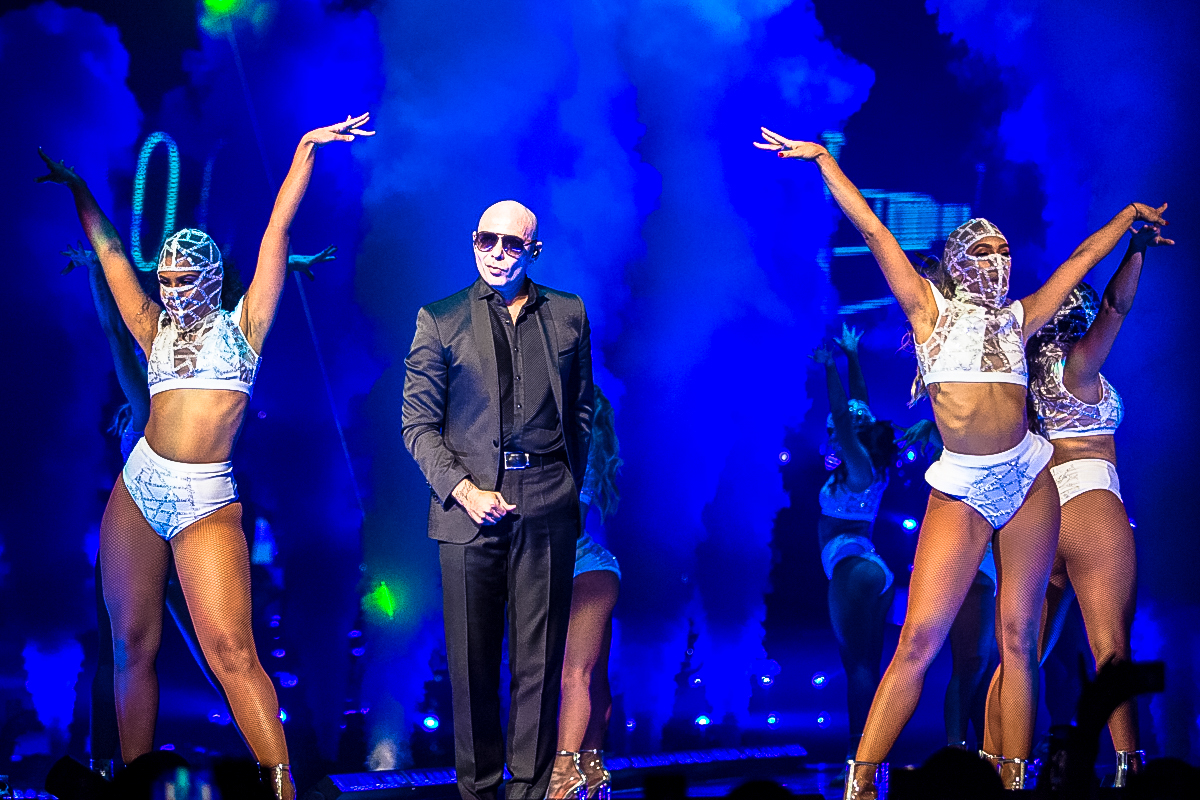 Naturally, it was Pitbull himself at the center of everything during the high-energy, nonstop set. The 36 year-old is the son of Cuban expatriates. He was born in Miami as Armando Christian Perez, before adopting his aggressive canine stage name. On this night, he played more than 20 hits culled from a career that is approaching 20 years in length. 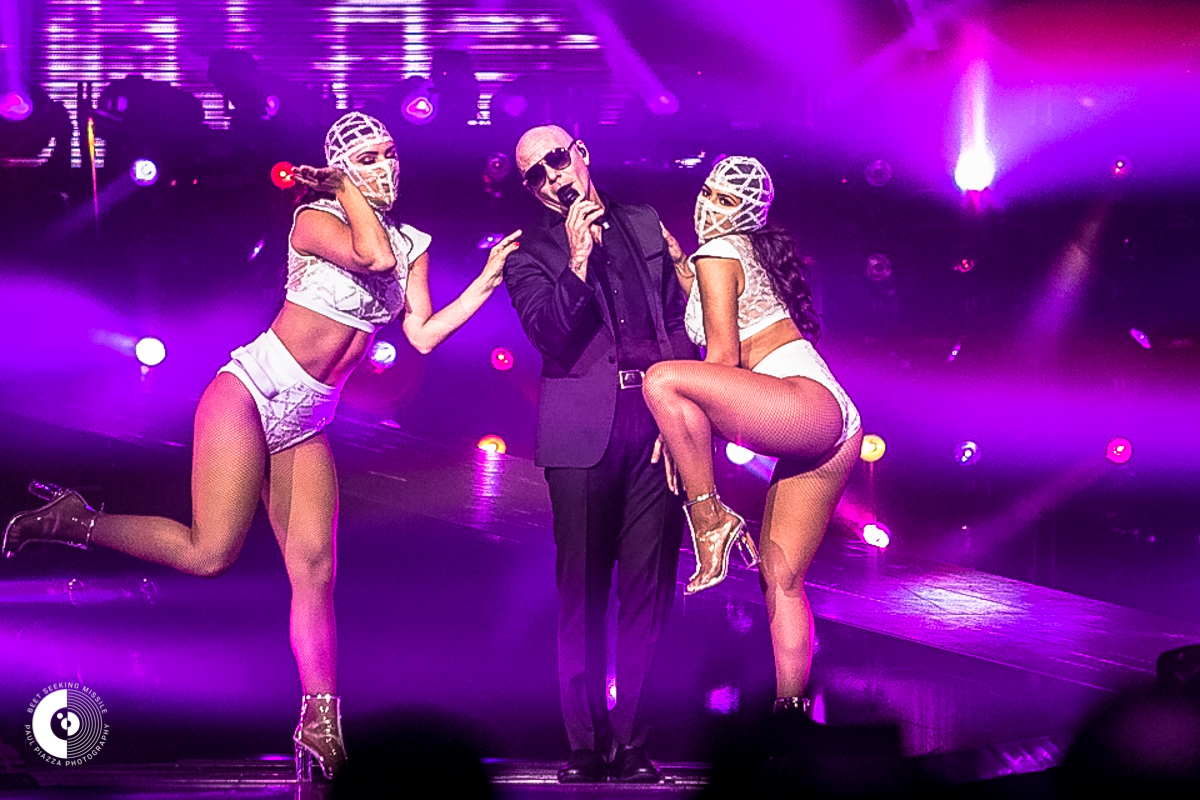 Pitbull’s most recent album, “Climate Change,” has many collaborations, including one with with Iglesias called “Messin’ Around.” It’s a pretty good tune, but nowhere near as impactful as the pair’s collaboration “I Like It,” the song with which they closed the show together. This was a global dance hit and you could have been in any country on any continent and people would recognize this song. Chances are you’ve hummed along to it at some point in your life, even if you don’t want to admit it. It’s quite the guilty pleasure. 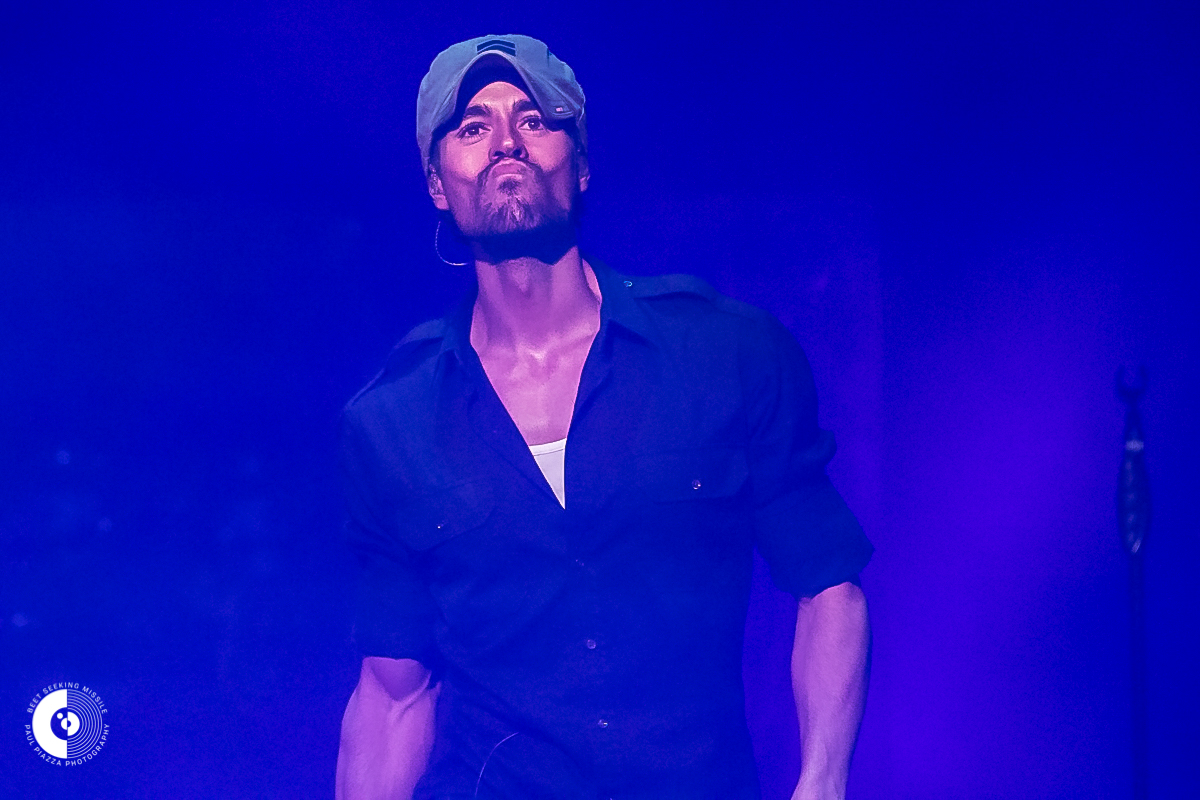 Iglesias, who hails from Madrid, Spain, has led an interesting life filled to the brim with celebrity. Besides having a famous father, his mother’s aunt was once married to Steve McQueen. For the last sixteen years or so, he has dated Russian tennis player and worldwide sex symbol Anna Kornikova. Born Enrique Miguel Iglesias Preysler, he initially recorded under the name Enrique Martinez, hoping to avoid using his father’s name for fame. But after one album, he decided to change his stage name to Enrique Iglesias and has never looked back. He’s charted more number ones on Billboard’s dance charts than any other male artist and has scored over 150 number one hits over all of the Billboard charts. That’s an unprecedented level of success. Perhaps it’s why he’s building an elaborate estate on an island outside of Miami with Kornikova. 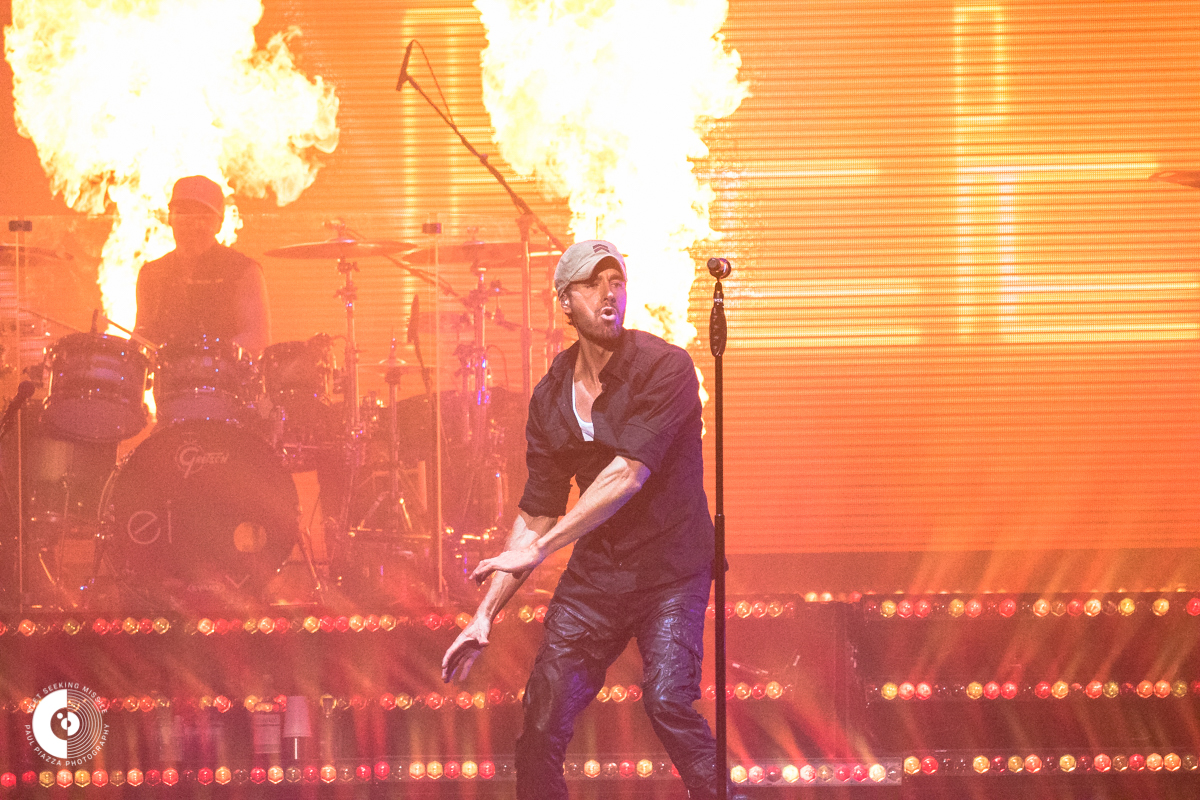 His set was full of high-energy numbers, but also featured a couple of acoustic numbers. At one point, most of the band stepped down off the long runway and up onto a smaller stage behind the behind the front of house engineer, where they played a passionate love song with Iglesias and a backup singer acting out the lyrics theatrically. 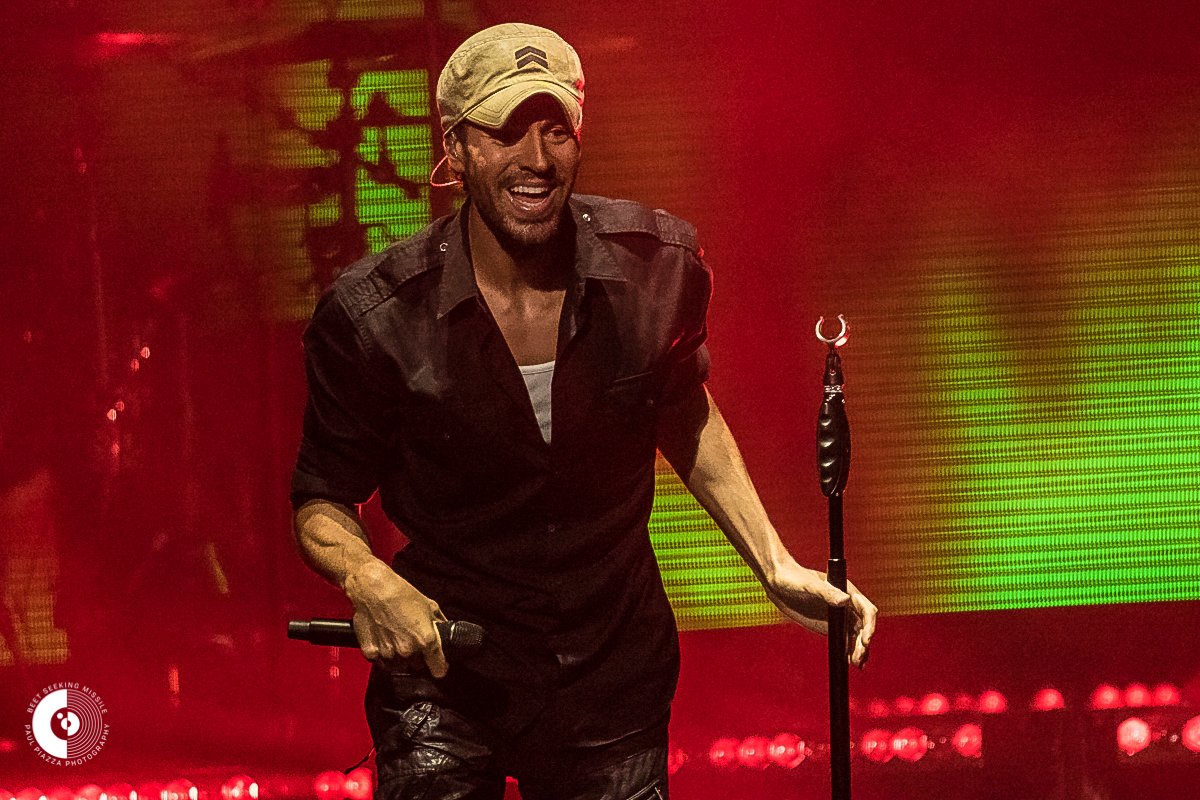 Iglesias engaged the crowd constantly on this night.  A couple of times he climbed off the stage and into the lower bowl and it appeared a couple of times during this engagement that the fans would not let go of him. The entertainer, who just turned 42, appeared to be at top fitness as he covered the length of the runway countless times and horizontally crossed the stage as well, pausing periodically to lean on a guitarist and catch his breath. The lengthy runway also became a moving sidewalk at one point, where Iglesias mimed, mugged and moonwalked a little. This effect brought to mind ZZ Top’s use of a similar effect years ago, except without the beards, spinning guitars or booty shaking fans. 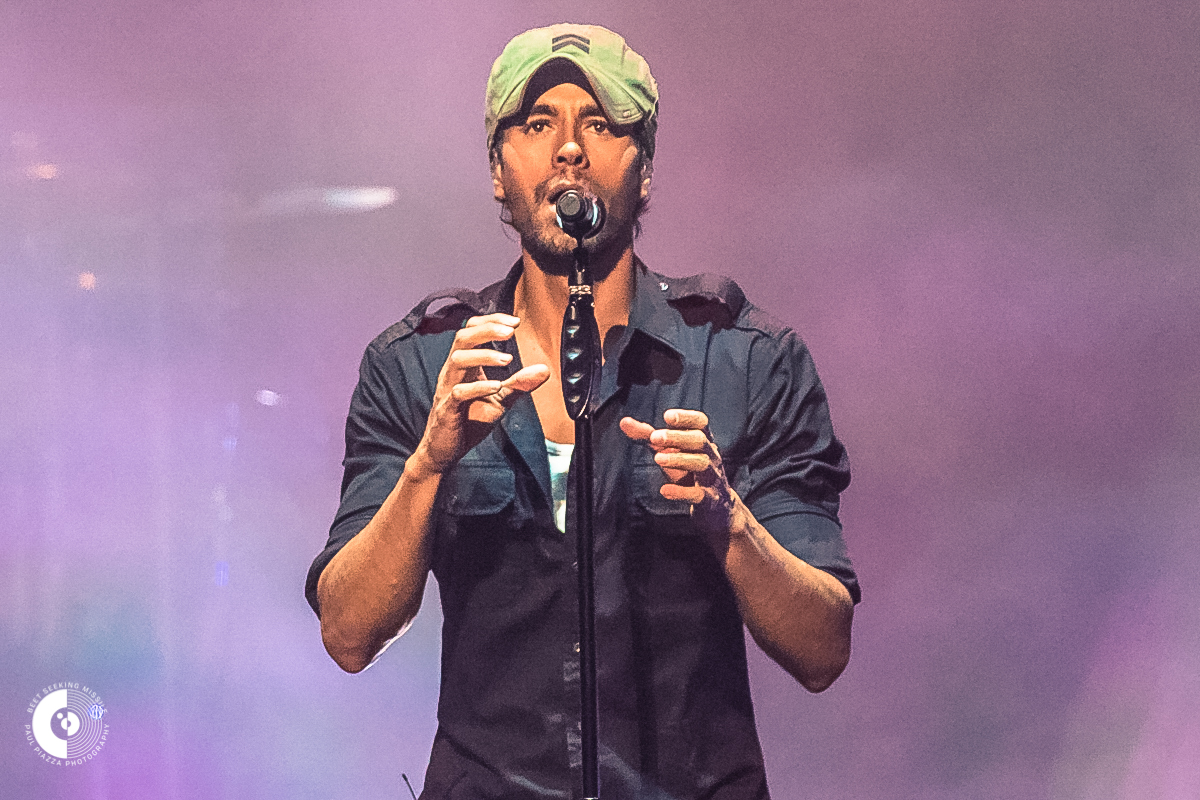 It’s not hard to see that with the efforts these performers pour into both their performance that they are committed to staying atop the pop charts. The labor they put in onstage is mirrored in what they do in the studio as well, with countless singles hitting the charts. Furthermore, both have filtered their prodigious musical output music into many familiar films and television shows. There are Iglesias tunes in “Hot Tub Time Machine” and “Wallace and Gromit-The Curse of the Were-Rabbit” and Pitbull songs in “The Sopranos” and “The Simpsons Movie.” Pitbull even wrote the theme song for the 2014 World Cup. Therefore, it’s not just the fans in the packed house at Golden 1 Center who are aware of this pair, together or apart, these Latin giants are already ingrained into our common musical lexicon.

Find out more about Pitbull on his Facebook page.