Pink brought her Beautiful Trauma show to the Oracle Arena in Oakland and it was nothing short of amazing. The artist, whose real name is Alecia Beth Moore, has sold over 40 million albums worldwide, won three Grammys, a Brit Award, seven MTV Music Video Awards, and in 2009 Billboard named her the Pop Songs Artist of the Decade. In 1995 she was a founding member of the all-girl R&B group Chance but went on to record a solo album in 2000, Can’t Take Me Home, which went double platinum in the US and had two top ten singles, “There You Go” and “Most Girls.” The following year she took a more pop direction and recorded her second album, Missundaztood, which had three top ten hits including “Just Like a Pill,” “Get the Party Started,” and “Don’t Let Me Get Me”. Her third album, Try This (2003), didn’t sell as well but her next studio albums I’m Not Dead (2006) and Funhouse (2008) went on to become multi-platinum sellers and she’s had a few US number one singles including “Raise Your Glass” and “So What.” She’s currently on tour for her latest album Beautiful Trauma (2017) which was the third bestselling album of the year. 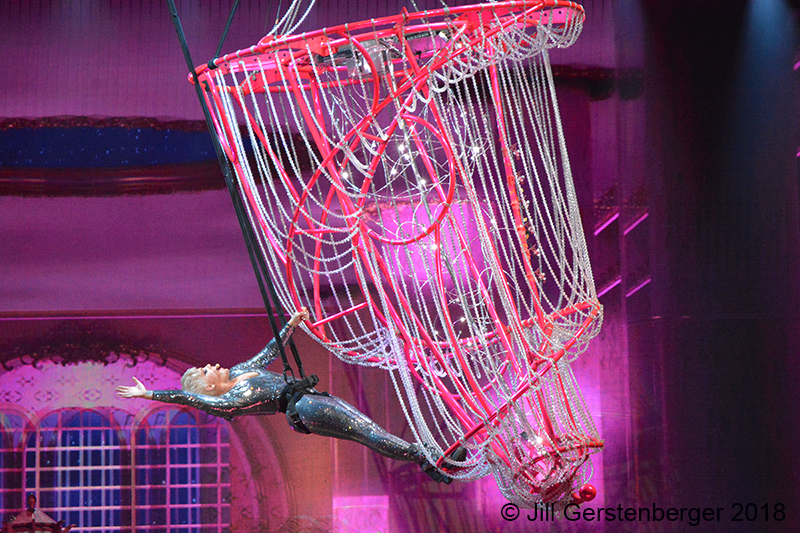 The show at the Oracle Arena was a fantastic display that was up to par with the shows you see in Las Vegas, with aerial acrobatics, dynamic lighting and set design, talented dancers with great choreography, and seamless production values all set to Pink’s lively pop/rock songs that were performed by a full rock band onstage. The show was eye-catching from start to finish and as the pink curtain dropped to start the show we were amazed at the spectacle of Pink swinging high above the stage from a twenty-foot chandelier in a silver sparkly jumpsuit and platforms while she sang “Get This Party Started” from her headset mic. She was attached to a harness which allowed her to bounce from the stage filled with dancers back up to the chandelier and you just knew the next couple of hours were going to be great. 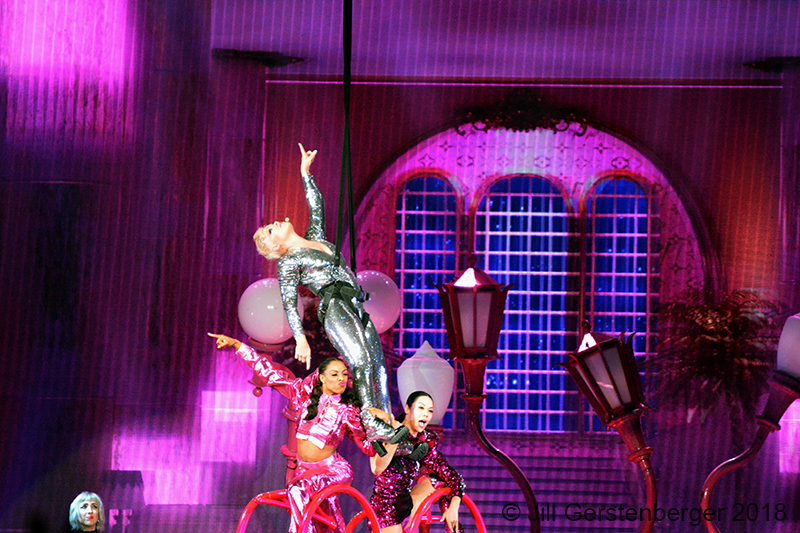 The show had several costume and set changes that happened quickly and almost appeared to be magic. A Parisian street scene changed into a forest Midsummer Night’s Dream scene complete with dancers with animal heads and a hundred-foot-tall tree that appeared out of nowhere. Pink and her band did an impressive cover of the Nirvana song, “Smells Like Teen Spirit,” which demonstrated the power of her voice and the talent of the musicians she’s brought on tour with her. 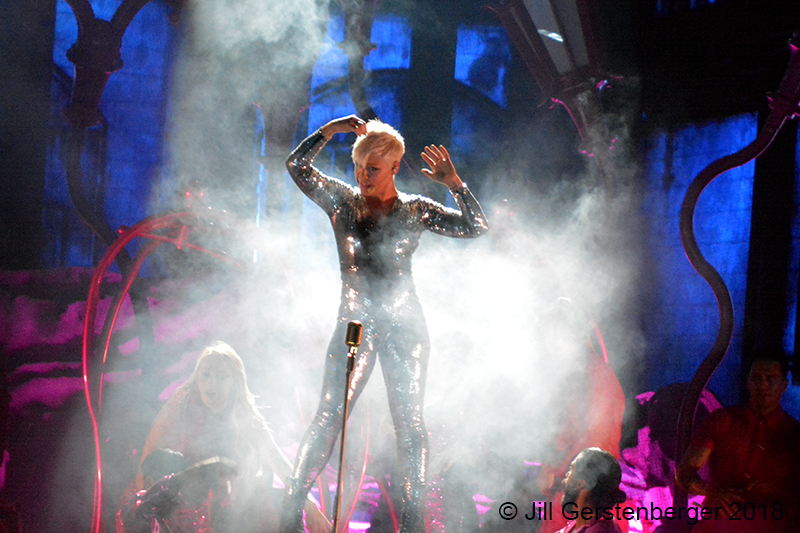 One of the cooler set changes was for the song “Just Like Fire,” which included flame pots along the back of the stage that appeared to be billowing fire everywhere like an out of control wildfire. Pink was traipsing up and down the catwalk and around the stage looking confident and beautiful and appearing unfazed by all the commotion at the back of the stage. The show got a little political at times while Pink talked about not being afraid to be feminist as images of the Women’s March played on the screen behind her, it was more empowering than preachy. Several times in the show Pink talked about being a mom and told stories about her kids. One charming moment happened when Pink was talking to a little girl in the audience who was having a birthday and wearing a tiara. The girl was turning eleven and Pink told her that eleven was cool but twelve would suck but then thirteen would be amazing. Her ability to connect with the audience was really something to see and she seemed to make eye contact and smile at everyone within viewing distance. 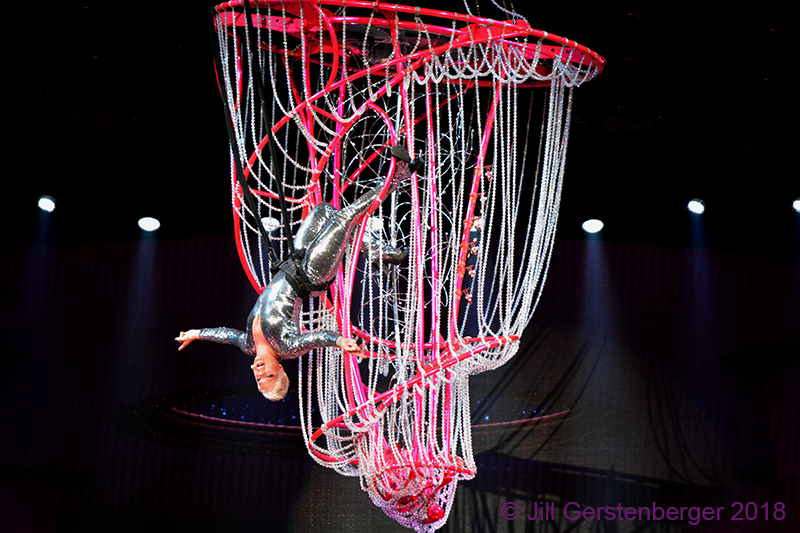 Another highlight came when she performed an acoustic version of “Fuckin’ Perfect” with just her guitarist while the entire audience sang along. The sold-out crowd turned on their cell phone lights and waved them around like faux lighters. 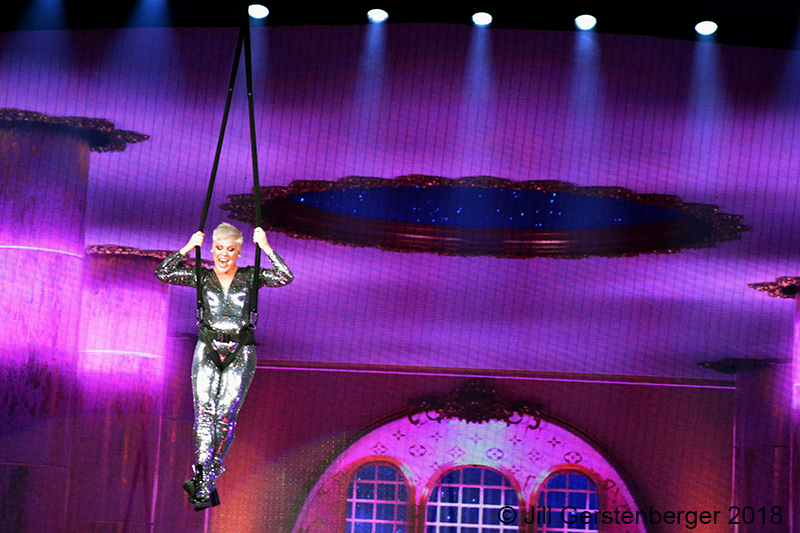 The encore was a jaw dropping aerial display where Pink who was suspended by three wires flew around the entire audience several times doing somersaults and handstands on pillars while singing “So What.” She had on the silver glitter body suit and heels again for this so she shimmered like a disco ball under a follow spot. There was something amazing about her doing flips about ten feet over our heads and up close you can really see that her years doing gymnastics really paid off. She looks strong and powerful and she also appeared to be having the time of her life. 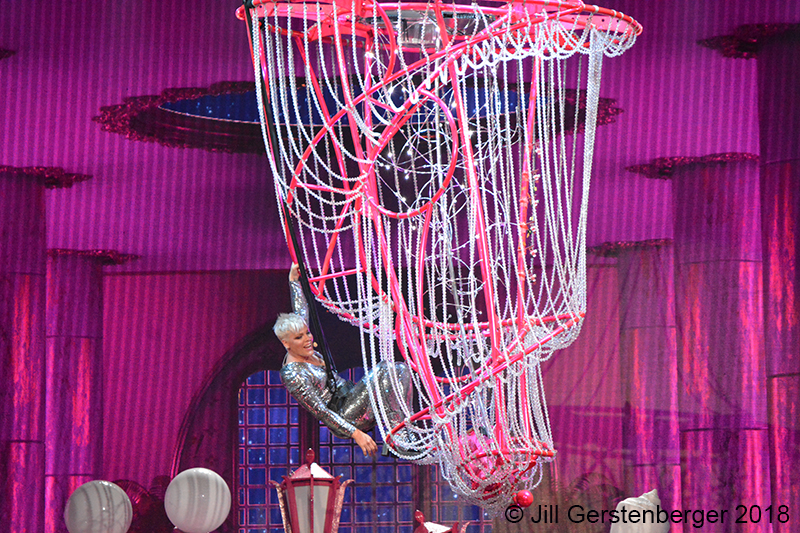 If you get the chance to see this show you should do it. The lighting, set design, dancers, and aerial choreography are all top-notch quality and Pink is engaging, talented, and fun to watch. We were impressed with her singing, her attention to detail and her acrobatics which even involved removing the harnesses a couple times while high up in the air. She is truly a performer that you should see just to see how good a performance can be.

Find out more about Pink here.