Despite a hiatus away from the music scene that helped to create the mega-media celebrity that is now Lenny Kravitz, he is still every bit the patchouli-infused rock star that burst on the scene back in 1989. The funked-up hippie that drew his musical influences from Prince, Hendrix, and Curtis Mayfield , and his fashion sense from his uptown New York roots and Beverly Hills upbringing, reminded everyone of that very fact on his recent stop through San Francisco at the Bill Graham Civic. 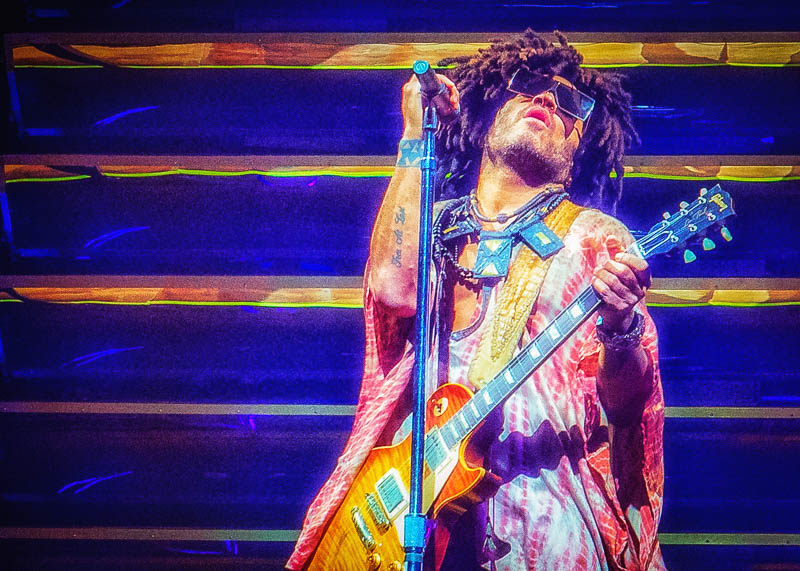 To some, the 54 year-old renaissance man is now known more for his acting career than his music, cashing in on a string of character roles in hit movies, most notably playing the role of Cinna in the Hunger Games series. Then there is Lenny the design maven, who heads up Kravitz Design Inc. a firm that lends design innovations to everything from furniture to commercial and residential projects. But all of the peripheral ventures melt away though when Lenny straps on his guitar and hits the stage. 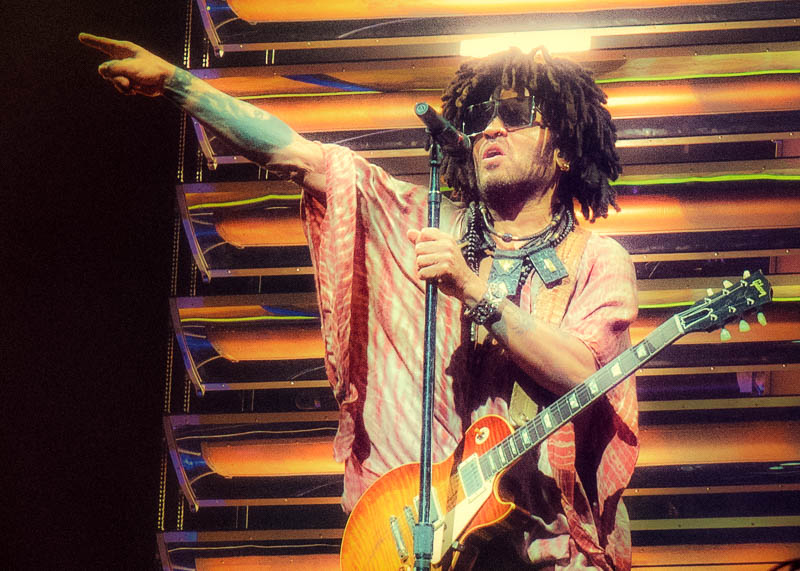 On this evening at the Civic he was feeling himself from the moment the house lights dimmed and re-ignited to reveal Kravitz under a perfectly mussed mop of dreads wearing dark sunglasses and a psychedelic dashiki. With the opening guitar chords of ‘Fly Away,’ it was immediate pandemonium. 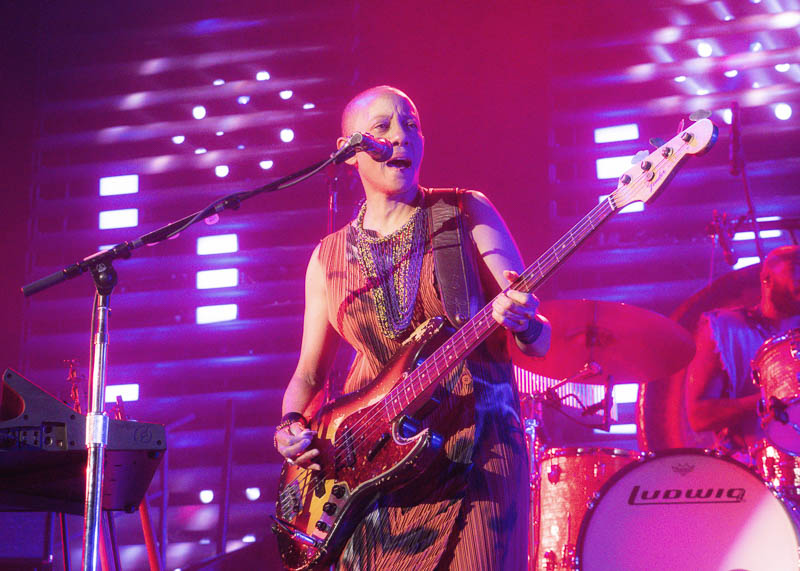 All of the elements of a top-flight rock show were in place, with everything orbiting around the heat of one of the few true remaining stars in rock. Kravitz’s magnetism caused bodies to press up to the front barricade of the stage and kept security guards busy as fans pushed forward, eager to get closer to him.

Amidst the hot flashes of the stage lights, the band was a sheer musical powerhouse. Propelled by the signature guitar riffs of Craig Ross, they effortlessly cranked out the funk-rock hits that Kravitz has carefully crafted over his nearly 30 year major label recording career. But it was Kravitz’ smash cover of the Guess Who’s ‘American Woman’ that really sent the evening into hyper drive. 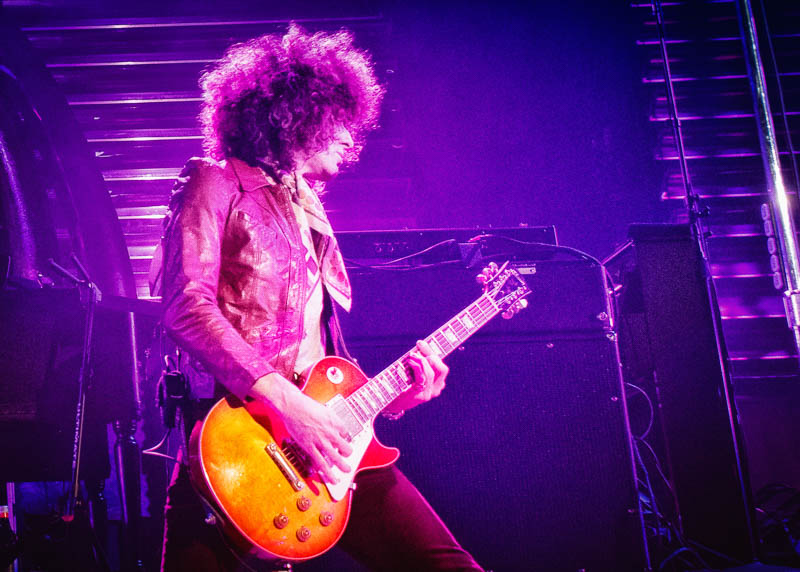 With Kravitz taking on the lead guitar duties he struck the opening chords to the hippie-era anthem. As the band joined in and flexed its muscles, Kravitz played up to the crowd, posing and prancing around with his dreads flying. Without missing a beat, ‘American Woman’ morphed into Bob Marley’s ‘Get Up Stand Up’….the love fest was in high gear.

This was an especially poignant call out to the female contingent who did not miss the message held in the connection of the two songs. Alluding to the recent debacle surrounding the Supreme Court nomination of Brett Kavanaugh, it was a call to action for women to rise up and lead the revolution against the Republican right. The stirring rock and reggae mash up even prompted a bra to be thrown onstage. 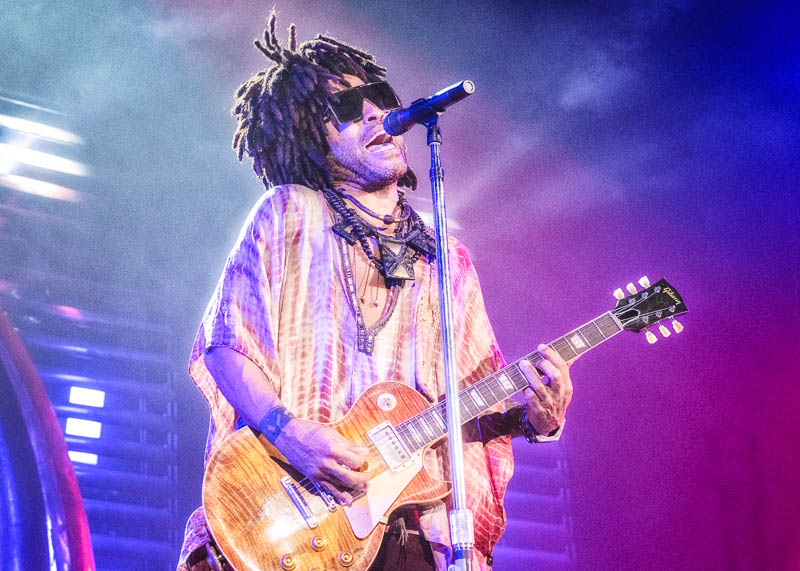 In addition to unveiling the new music of Raise Vibration, Kravitz’ return to the realm of rock also seemed to come with his assumption of a new role as rock ambassador. A role that has had a gaping void since the passing of his mentor Prince. Kravitz called him out in a reverential way during the show as a major inspiration, and channeled Prince throughout the show with his electric stage presence and masterful musicianship.

Raise Vibration evokes the stretched out long play funk jams of Prince in the vein of Sign o’ the Times, The Black Album and Musicology. The songs are a bit longer and have a more experimental feel. The banger from the new album is ‘Low,’ and when Lenny and crew unleashed it on the Civic it created waves of grooving silhouettes throughout the hall. Dorsey’s playing on this track in particular was a clinic in funk bass. 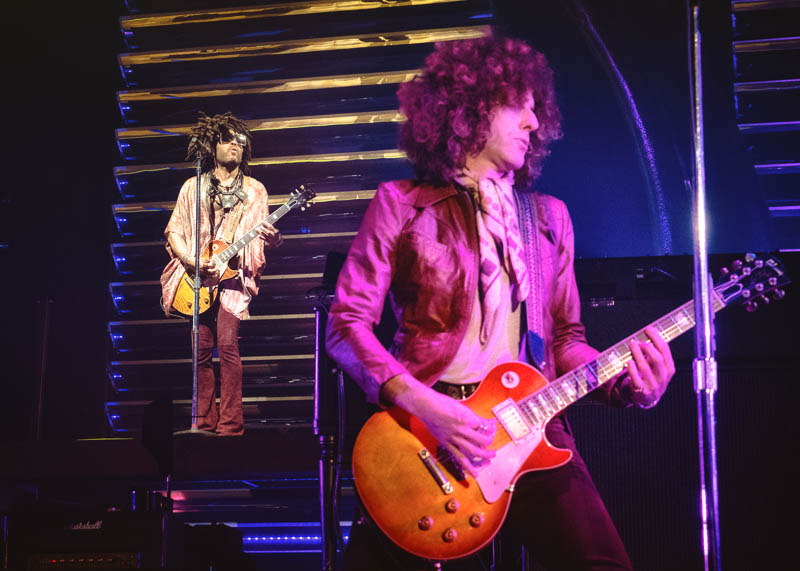 With the roof already straining to stay connected to the venue, Lenny sent fans into delirium by going into the crowd. As he weaved his way through the crowd and up to the balcony, a scent of island ‘natural dreadiness’ (he now resides in the Bahamas) permeated and the funk overflowed.

When it was all said and done, Lenny had dropped nearly two hours of good vibrations on downtown San Francisco. After concluding his regular set, he returned, slapping hands with folks in the front before taking it all back to ground zero, lighting up the place with the title track from his 1989 debut album ‘Let Love Rule.’ 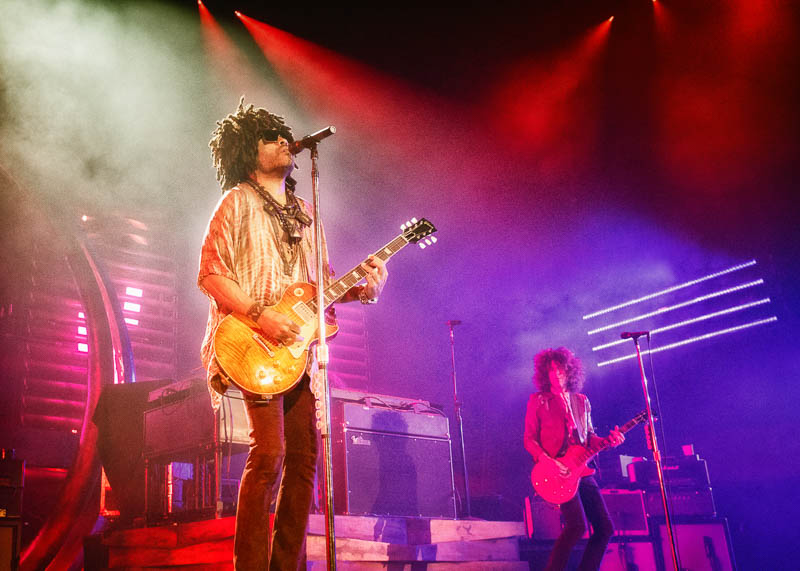 The message is more pertinent now than it has ever been, and Kravitz hammered that point home for his congregation before firing it back up again with the familiar guitar drive of ‘Are You Gonna Go  My Way.’ Once more the general admission floor was an undulation of dancing and smiles….Lenny still rocks….and he wants you to go vote on Nov. 6.

Taking the stage before Lenny set it on fire was the up and comer Curtis Harding. Harding hails from Atlanta and has a pedigree that includes singing backup to Ceelo Green. Fronting his own outfit, Harding looks the look and plays the sounds of a 70s cop movie. Actually he would be right at home on the set of The Deuce.

His music is a meld of Curtis Mayfield, Bill Withers, and Al Green….deep grooves of classic soul honesty dressed up in street angst and psychedelic accessories. By the end of his set he definitely caught the attention of the early arriving crowd with the jewel of his set being ‘It’s Not Over’ the infectious single released over the summer. While he is due for a new full album release, Harding’s 2017 recording Face Your Fear is a good listen, particularly suited for cruising…and well you know.

Find out more about Lenny Kravitz on his website.