Electropop group Phantogram brought their latest tour to the Greek Theater in Berkeley for a summer night of lively and admirably complex performances. Formed in 2007 by vocalist Sarah Barthel and guitarist Josh Carter, the duo have made a name for themselves as high-energy, genre-bending pop artists, incorporating everything from trip-hop and robotic synth to wailing guitar solos into their highly danceable tracks. Such wide-ranging influences paired with the Barthel’s commanding stage presence made for a well-produced and effortlessly fun live show.

With red Solo cups in hand and a deep thumping bass echoing across the amphitheater’s steep concrete steps, the pair entered the stage to the cheers of an eager crowd. Barthel and Carter dominated the stage from the start, launching into a seductive vocal back-and-forth against the song’s pounding bass. “Same Old Blues” followed, showcasing Barthel’s vocal strength in a gospel-like chorus layered over mournful organ notes while Carter shined with a mewling guitar solo. Phantogram flaunted their musical versatility with “Black Out Days.” Gravelly guitar weaved through the heavily electronic song before abruptly ending with Barthel’s lone, delicate voice against gentle piano notes. With “Run Run Blood,” the group utilized heavily distorted instrumentals and Barthel’s whispering vocals for a fantastically creeping groove. 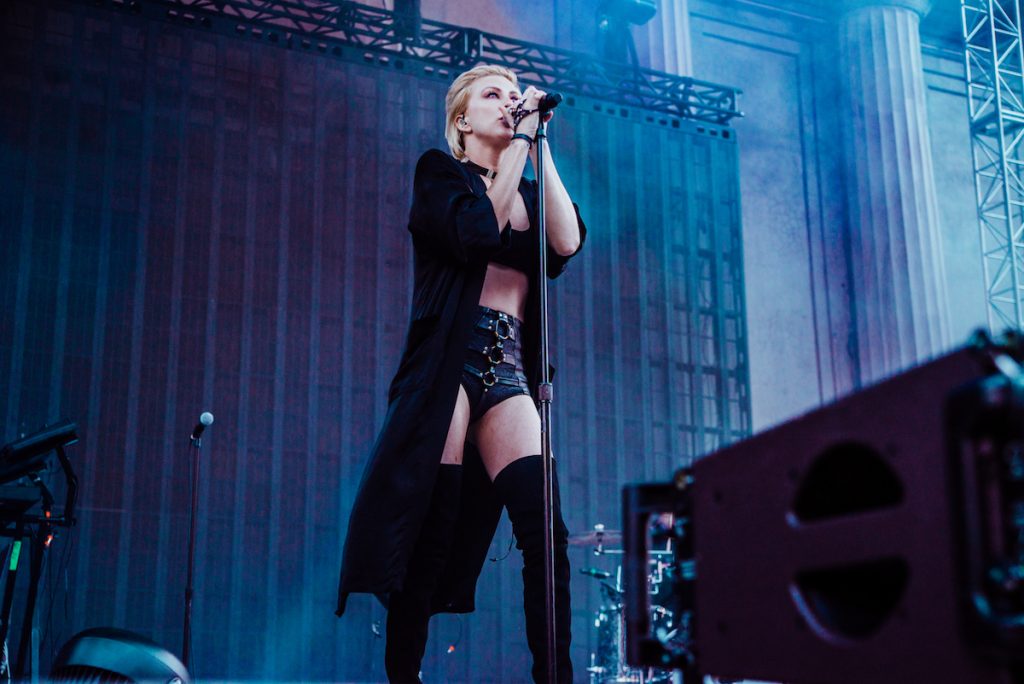 In a departure from their newer material, Phantogram next performed “Turning Into Stone” from their 2011 album Nightlife. Atmospheric, dreamy synth accompanied Carter’s soft voice before ending in a swell of expansive sound that engulfed the melody. “Don’t Move” found Barthel on bass, looking unfairly cool in a black robe billowing in the wind and sauntering around the stage in thigh-high boots. The song’s opening note brought cheers of recognition from the crowd, clapping along to the bass drum suspended in robotic guitar notes and Barthel’s angelic falsetto. Finishing out the older material was the buzzing “Mouthful of Diamonds.”

One of the highlights of the night was glossy pop track “Calling All.” Merging heavy hip-hop beats with an almost tropicalia-sounding chorus, urging the audience “you know you wanna shake,” inevitably had the majority of the crowd swaying to the beat. Dominated by Barthel’s refrain of “We all got a little bit of ho in us” and accompanied by the lyrics flashing onscreen, the cheekily self-aware song was irresistibly fun. After the final beat, Barthel pointed far back into the crowd to say, “I just wanna say thank you to the guy who pulled his shirt off. I saw the whole thing…you fucking rule.” The audience erupted in cheers, and the still-shirtless man jumped wildly in his seat, thrilled by the recognition. It was moments like these peppered throughout the night-moments that compelled middle-aged men to dance and twirl their shirts over their heads in front of thousands of people and served as a testament to the infectious energy Phantogram brought to the stage. 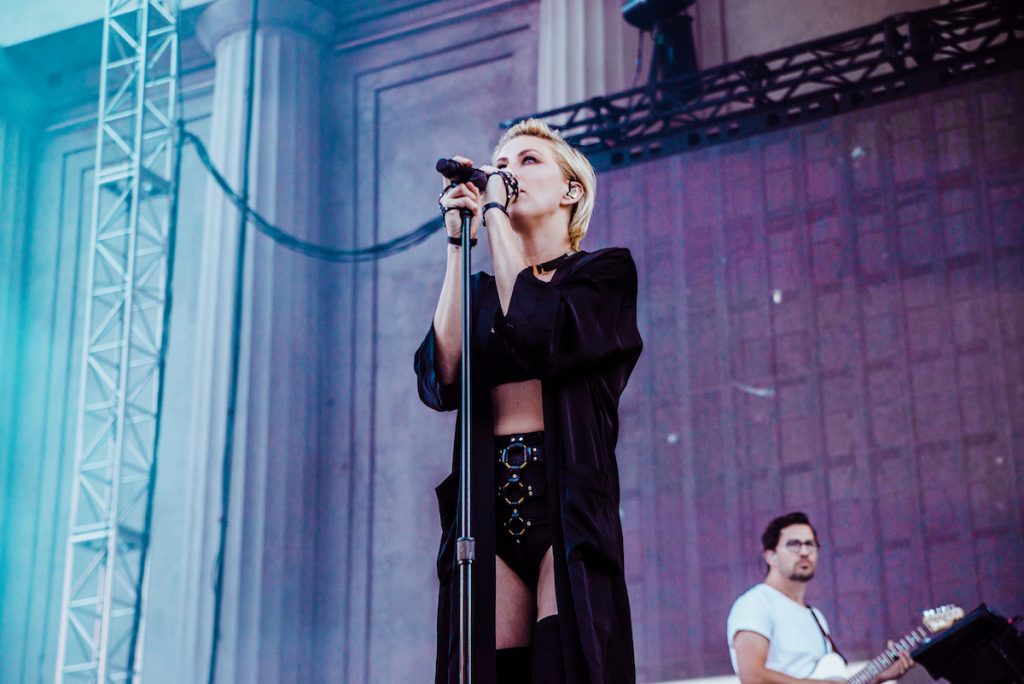 With the eerie and pounding “When I’m Small,” the duo again highlighted their power at juxtaposing an explosive chorus with delicate synth-y refrains while Barthel’s impressive, drawn out falsetto drew well-deserved cheers from the crowd.  Before launching into “Cruel World,” Barthel prepped the crowd with “Let’s turn this motherfucker out, thanks again”. It was a worthy introduction to the song, which contrasts heavily industrial sounds with melodic piano for a crashing whirlwind of vibrancy. The performance’s fiery energy drew some of the loudest cheers of the evening. 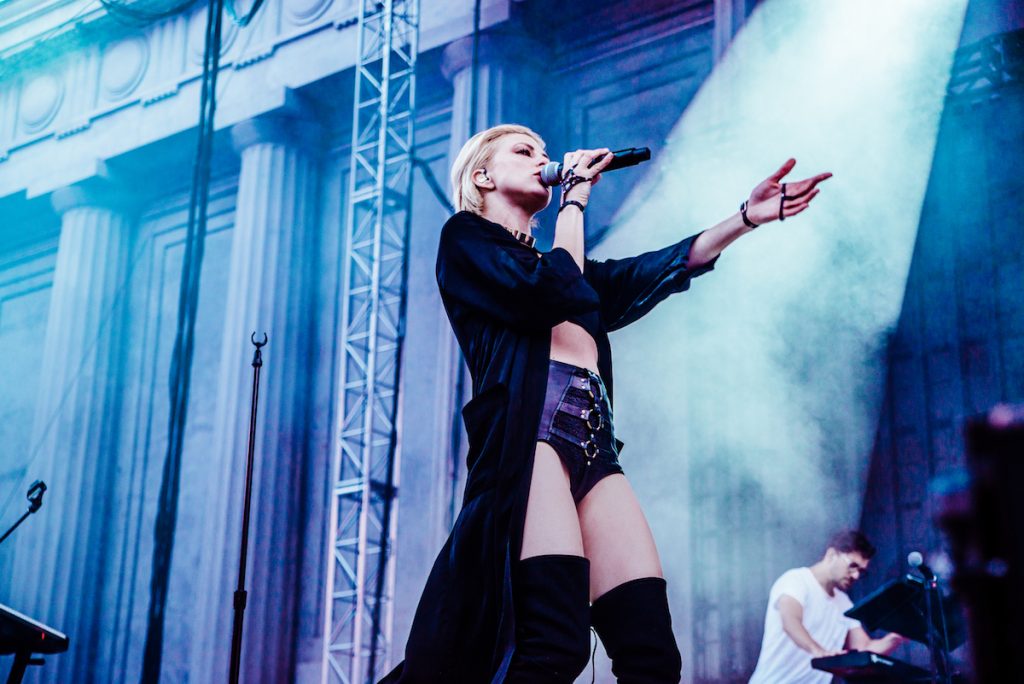 Phantogram ended the evening on “You Don’t Get Me High Anymore,” the bombastic single that propelled the duo into the mainstream. Across the stage screen projected lines of blinking faces and grasping disembodied hands, unsettling images to accentuate the song’s intense, eerie atmosphere. The audience reacted with expected enthusiasm to the song, sustaining eruptions of cheers and shouting the lyrics. Barthel’s final notes rang through the amphitheater, a fitting end to a set of impressive, energetic performances.

Opening Dutch pop band Klangstof have only been playing together for a year, a fact that was evident for much of their performance. The band focused their set on mostly long (and at times tedious) atmospheric instrumentals, punctuated by impressive but minimal vocals. Entering the stage with little fanfare, the group kicked off the show with a nearly ten-minute medley that began as a simple refrain and found itself ricocheting from frantic guitar solos to an expanse of synth and percussion.

The group’s humility endeared them to the audience, using breaks between songs to say, “I don’t think any of us expected to be playing here,” and shake their heads in awe. The group’s set launched them into songs atmospheric in both substance and style; each element of their compositions spilled into the next, producing a set of aural watercolors that felt better suited for an intimate venue or soundtrack rather than an amphitheater show. Out of place or not, the crowd hardly seemed to mind. Klangstof, while far from polished performers, were treated to an audience enthusiastic for dreamy electropop, evidence to the potential of the humble young band.

Find out more about Klangstof here.