Indie-electronic band Passion Pit has become known for their upbeat music, and energetic stage shows, delivering a dominant performance on a Monday night to a packed house at the Fox Theater. Passion Pit songs are constructed around bright synth lines, booming drums, and the impossibly high vocals of frontman Michael Angelakos, giving the band a sprawling and majestic live sound. While Angelakos has struggled in the past with depression and bipolar disorder, he was in fine form on Monday as the band launched into the energetic opening song “I’ll Be Alright.” To get the crowd even more pumped up, the band wasted no time in ripping into the second track, “Sleepyhead,” one of their first ever songs and also one of their most beloved. The crowd got really into it, dancing and singing along, all while Angelakos bounced around on stage to a colorful set of LED and strobe light flashes. 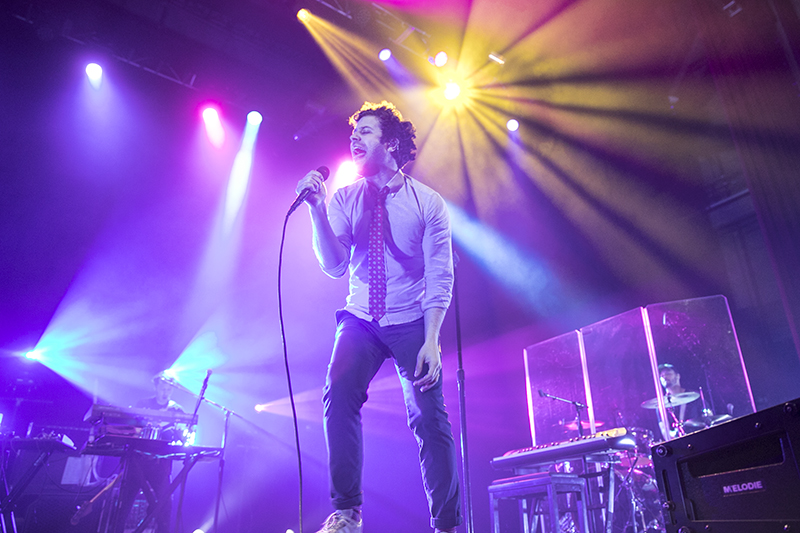 Next up was the anthemic rock of “Moth’s Wings,” featuring a sweet guitar line from Giuliano Pizzulo that gives the song a stadium level crunch. A few songs later, Passion Pit rolled out the grooving synth-funk of “Where the Sky Hangs,” a bristling anthem that revolved around a silky-smooth bassline from Aaron Harrison Folb. While Angelakos has a knack for dense compositions, what makes him so invigorating as a singer and performer is his ability to hit all the right notes at all the right times, creating an instantly memorable experience for the listener. 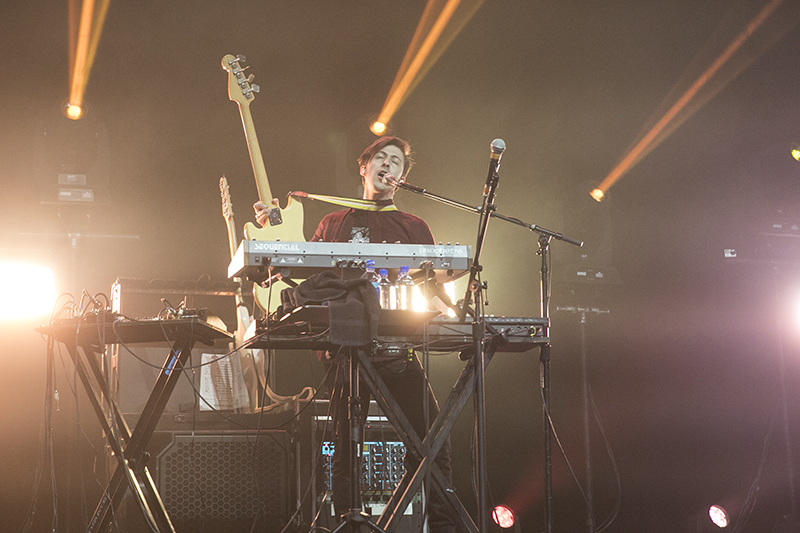 This was true a few songs later during the hook-laden pop of “Lifted Up (1985).” Anchored by a booming kick-drum driven pattern from Chris Hartz, the song soared as Angelakos gave another impressive performance, sending the crowd into an impassioned sing along during the song’s chorus. 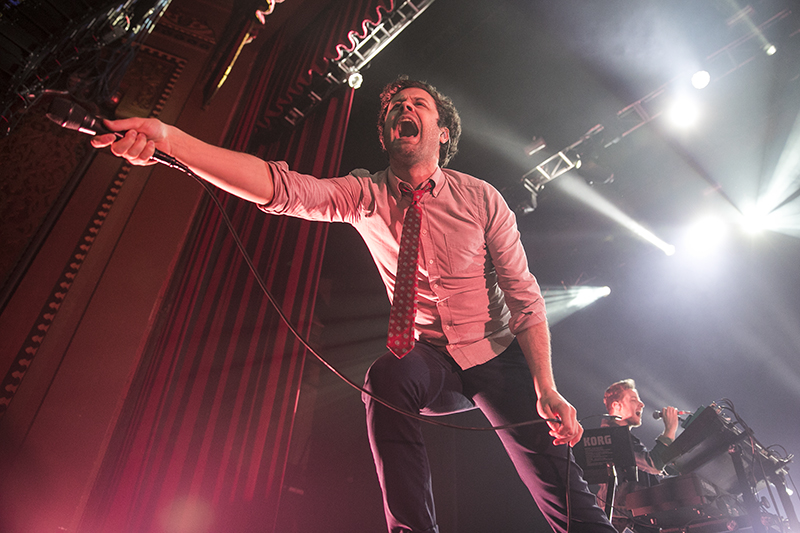 A few songs later the energy seemed to dip just a bit as the audience appeared to get a bit tired after a constant barrage of upbeat and high energy songs. Just when you thought the band was going to slow things down to match this energy, they ripped through the shimmering “Little Secrets,” a slick of anthemic pop that features a devastatingly catchy chorus that the audience couldn’t help but belt out. 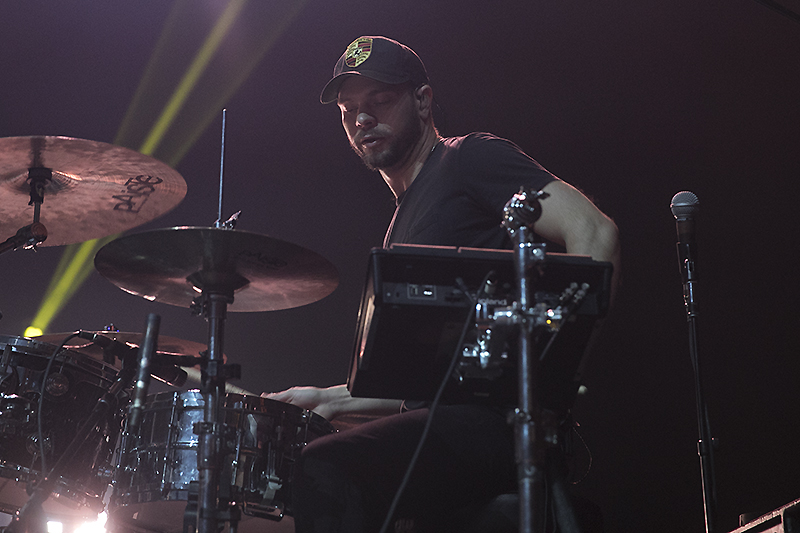 To finish out the main portion of the set, Passion Pit rolled out another big hit: the stomping “Carried Away.” Arguably the band’s most well-known song, “Carried Away” is pure pop genius: riding a propulsive drum beat and a wash of bright synths, the track keeps things in check during the verses and explodes during the choruses. 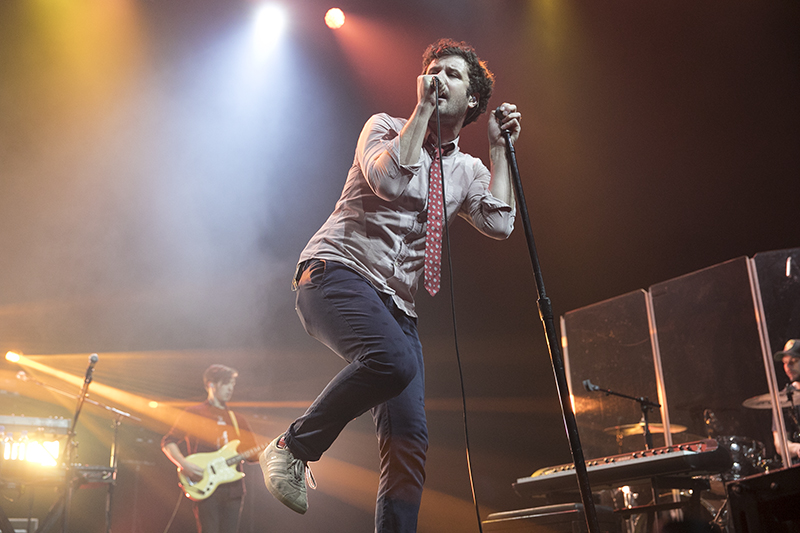 After a brief break, the band returned for a two-song encore, closing the concert with another hit, “Take A Walk.” Driven by a sweet melody, the piece makes use of an evocative push-pull dynamic, slowly building the tension in the verses and then pushing things into overdrive during the classic chorus. It was a fitting way to end a night that was filled with so much energy and passionate performances from the band. 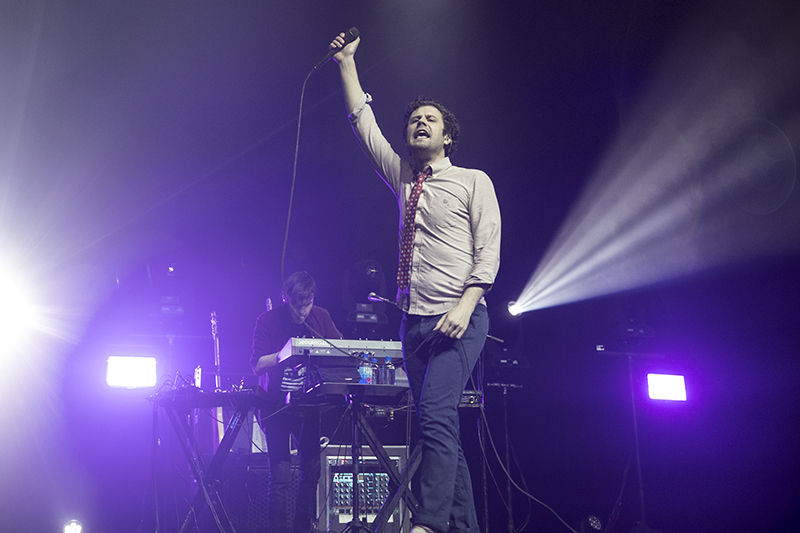 Angelakos and his backing band have developed into one of the most exciting and fun live acts out there, capable of delivering plenty of memorable and high-energy moments.

Setlist: I’ll Be Alright | Sleepyhead | Moth’s Wings | The Reeling | To Kingdom Come | Where the Sky Hangs | Make Light | Smile Upon Me | Lifted Up (1985) | Swimming in the Flood | Mirrored Sea | Cry Like A Ghost | Little Secrets | Carried Away || Encore || Constant Conversations | Take A Walk