Veteran thrash metal act Overkill came to Slim’s on a Friday night to play a lengthy sixteen song set that spanned their entire musical career, including a few tracks from their latest release, The Grinding Wheel. The band opened up their performance with the first track off that album, the scorching “Mean, Green, Killing Machine.” The song starts with a pounding intro, with DD Verni’s booming bass work slicing through the mix before exploding into an up-tempo thrash-fest. Backed by an array of strobe lights and smoke, the entire band was bearing down at full force. Bobby “Blitz” Ellsworth in particular sounded better than ever, attacking the song with his classic vocal snarl and getting the audience pumped into a frenzy of moshing and stage diving. 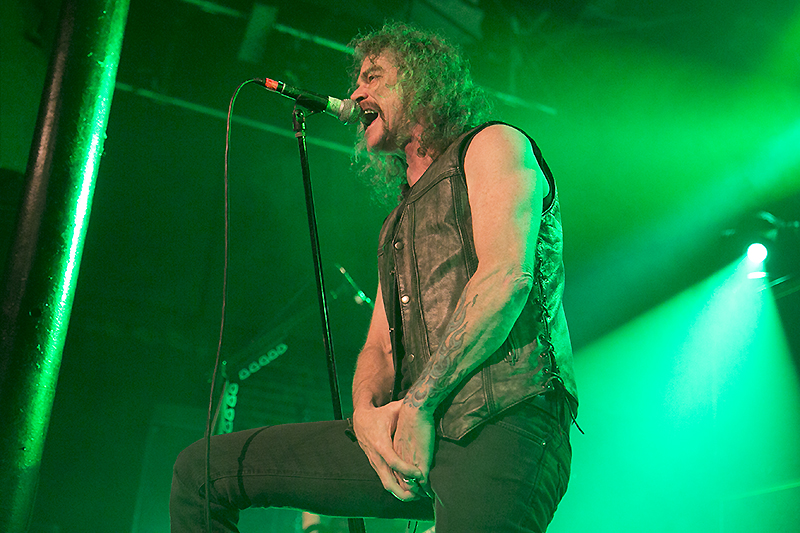 After ripping through a few newer songs, the band unveiled their first classic of the night – the anthemic “Hello from the Gutter.” The track rides a propulsive mid-tempo groove from Eddy Garcia to compliment some precise guitar work from the tandem of Dave Linsk and Derek Tailer. A couple of songs later Overkill tore through an inspired version of “Feel the Fire,” from their first album of the same name. Riding a galloping rhythm from Verni and Garcia, the song makes great use of start/stop dynamics over the entirety of its run time before abruptly ending. 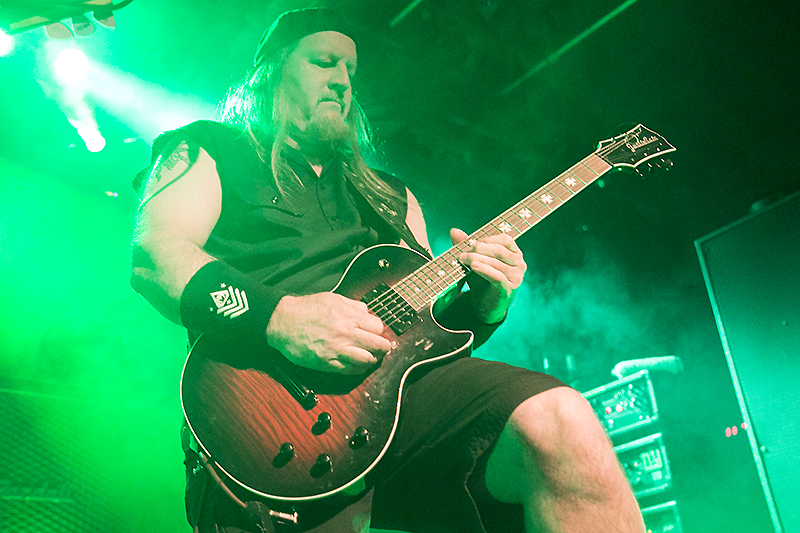 The band appeared to be in great spirits throughout, encouraging the rowdy and packed crowd to mosh and stage dive. Sonically the band sounded better than ever, particularly on the blistering “Armorist,” from 2014’s White Devil Armory album. As has been the case with much of their latter material, the song combines dense and percussive guitar and bass work in a tight lockstep, especially in the full throttled chorus which makes use of Garcia’s impeccable double bass drum skills to overwhelm the audience with unbridled fury. Following this was an interesting cover of the Thin Lizzy song “Emerald,” which was given a metal makeover that drastically upped the intensity and attitude of the original. Overkill closed out the night with an impressive three song encore which included their legendary cover of The Subhuman’s “Fuck You.” It was a fitting end to an incredible night of metal which showed that 18 albums into their career Overkill remains as powerful as ever. 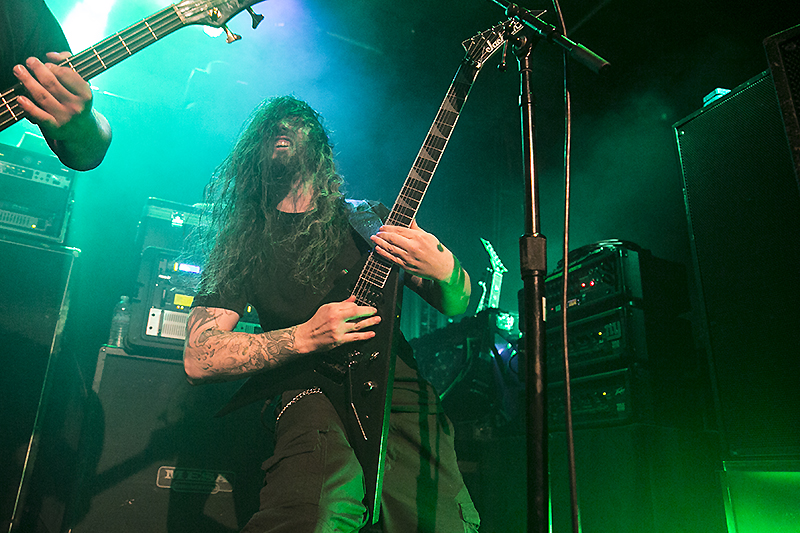 Technical death metal masters Nile opened up the night by delivering an overpowering set of crushing and punishing music which demonstrated their impressive musical might. Nile’s sound is based around the dazzling instrumental abilities of guitarist/vocalist Karl Sanders, combining atonal, hyper speed death metal with equally dazzling melodic pieces that evoke ancient Egypt. 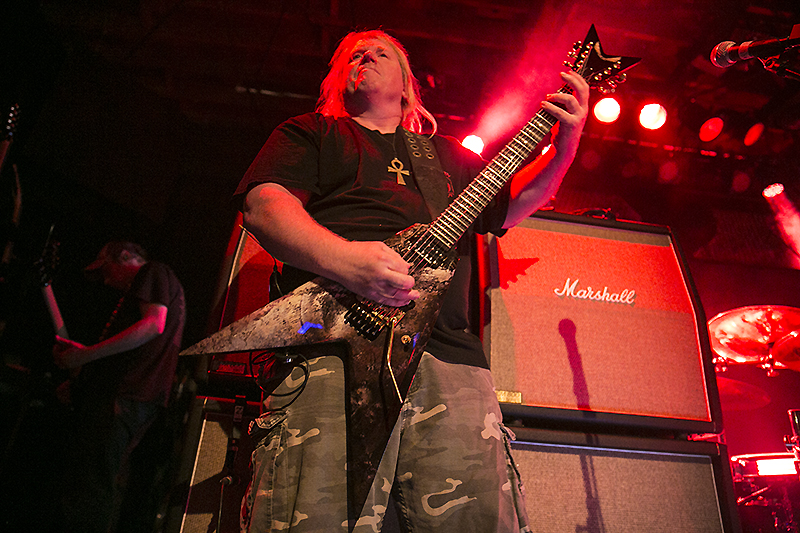 The band opened with one of their most well-known tracks, the brooding “Sacrifice Unto Sebek,” which alternates between ear drum bursting intensity and crushing groove. Keyed by drummer George Kollias, the song begins with an ominous bit of slow, dark riffing before blasting off into some of the most inhuman speeds ever played. Sanders and newcomer Brian Kingsland trade off not only finger-melting guitar work but also throat-splitting vocals, done in the guttural style the band is known for, throughout the song’s runtime. While Kingsland may have only been added to the group a few months ago, he fit in naturally with their sound and held his own musically, dishing out blazing guitar solos to match his counterpart in both speed and dexterity. 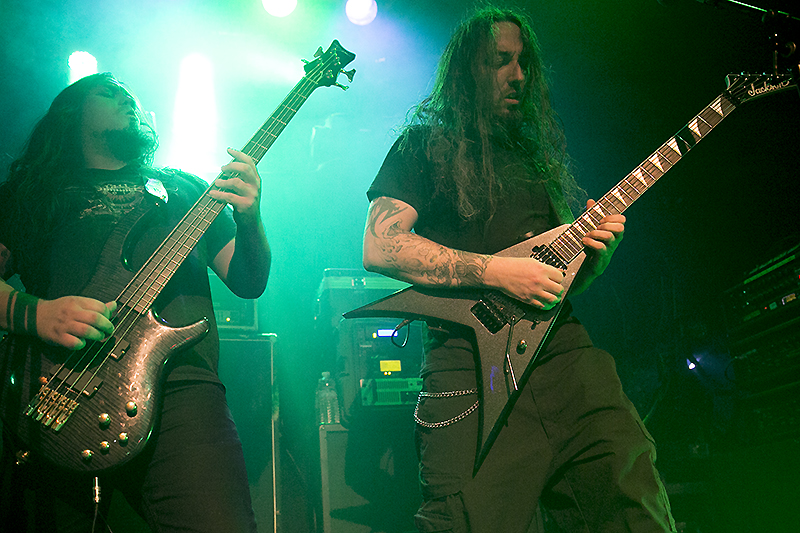 The next song up was the fan favorite “Defiling the Gates of Ishtar,” which contained the same kind of dynamics that Nile is known for. Sanders and Kingsland traded off furious riffing while bassist Brad Parris managed to hold it all together by matching the duo with his speedy runs. The song featured an incredibly powerful guitar solo from Sanders, featuring all sorts of sweep picked arpeggios and out-of-this-world string bends. Eventually the song devolves into an overwhelming breakdown lead by a series of guttural chanting from Sanders, Kingsland, and Parris before ending. 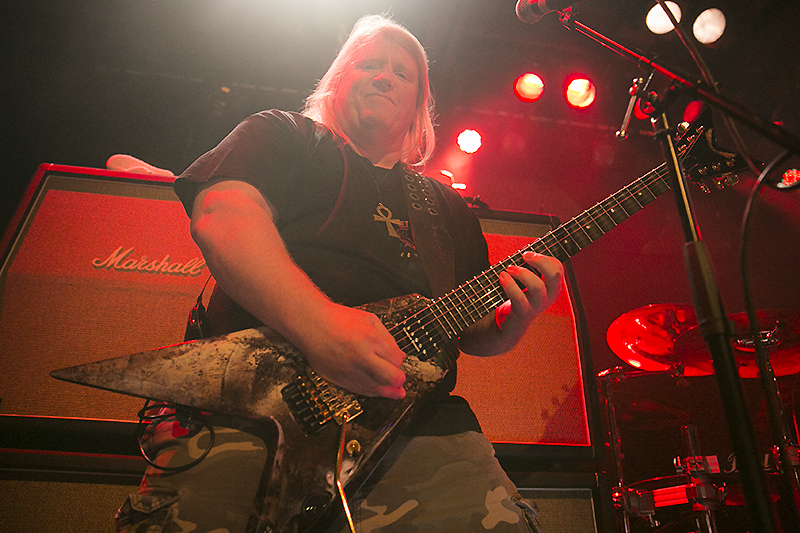 Finally, Nile closed out their set with another fan favorite (and ear drum crushing), “Black Seeds of Vengeance.” The piece featured some of the most melodic and harmonically interesting guitar work, with Sanders in particular delivering some unique solos and melodies to go along with the bruising riffing. Nile has shown that their new lineup is equally as capable of delivering the goods that their rabid fan base desires, certainly making them a formidable live band for some time to come.

For more information about Overkill, check out their website.

Setlist: Sacrifice Unto Sebek | Defiling the Gates of Ishtar | Kafir! | Hittite Dung Incantation | The Fiends Who Come to Steal the Magick of the Deceased | In the Name of Amun | Sarcophagus | Black Seeds of Vengeance

Find out more about Nile here.