All photos by Katarina Benzova.

Patience is a virtue. That old saying has never met a more appropriate application than in the case of the mercurial and transcendent band Guns N’Roses. On a Tuesday night at AT&T Park, patience was rewarded as G N’R appeared in San Francisco sporting the star studded duo of front man Axl Rose and axe-slinger extraordinaire Slash for the first time in over 20 years. 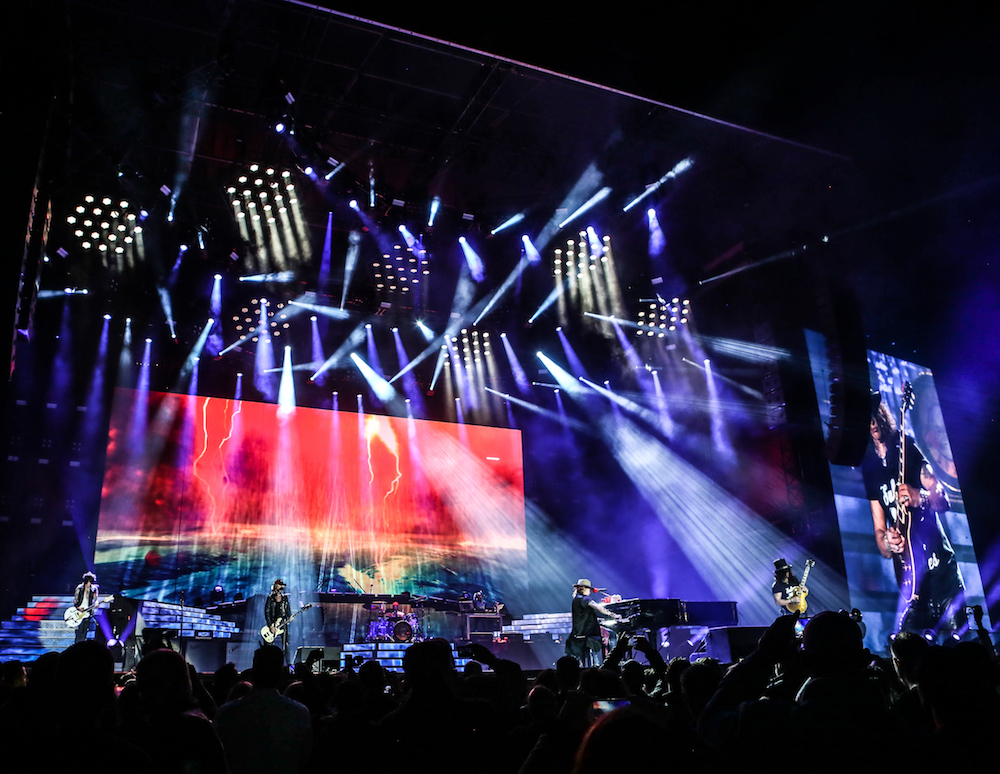 The anticipation has been building for decades. GN’R, having skyrocketed from the LA Strip scene to superstardom on the strength of their seminal recording ‘Appetite For Destruction’ (1987), has had a twisting, careening career-arch ever since the mid-90s, due to the chaotic and explosive relationship between Rose and Slash.

As fans filed into the sold out AT&T Park through the crush of Tuesday night downtown work traffic, the most common comments were, “I can’t believe I am finally seeing them…,” and, “I remember when I saw them at….” Seeing a legendary band whose career has stretched across four decades with do that.

Newer fans were looking to see what they had missed, and veteran fans wanted to see their heroes again. What would they sound like? What does Axl look like now? Will he be a diva and delay the start or cut the show short –acts he became infamous for in the nineties? Will there be a fight onstage? 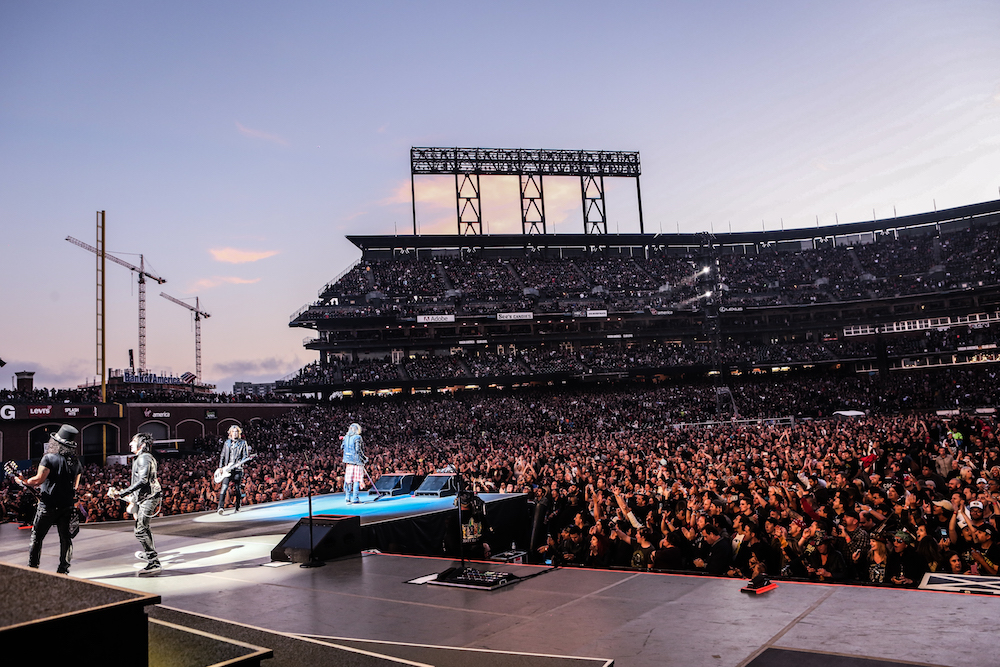 All of those questions would be answered in the course of a two-hour set that actually began earlier than the 8:15 listed start time. Fans were still trying to get a beverage and get settled when the ‘Looney Tunes’ / ‘Equalizer’ intro sequence started. Suddenly it was a scramble to get to where you needed to be….people running into each other and much beer being spilled in the process.

When the opening of the dark and dangerous “It’s So Easy” blared through the sound system, the answer to what they would sound like became apparent. They still sounded awesome, and the shrieks and screams from the crowd supported that fact.

Behind Rose and Slash were original bassist Duff McKagan, guitarist Richard Fortus, drummer Frank Ferrer, and Dizzy Reed and Melissa Reese (keyboards / synths). This is a group of true pros, so the quality of the music was in place from the opening to the closing notes, as they provided the perfect musical backdrop for Axl and Slash to do their things. 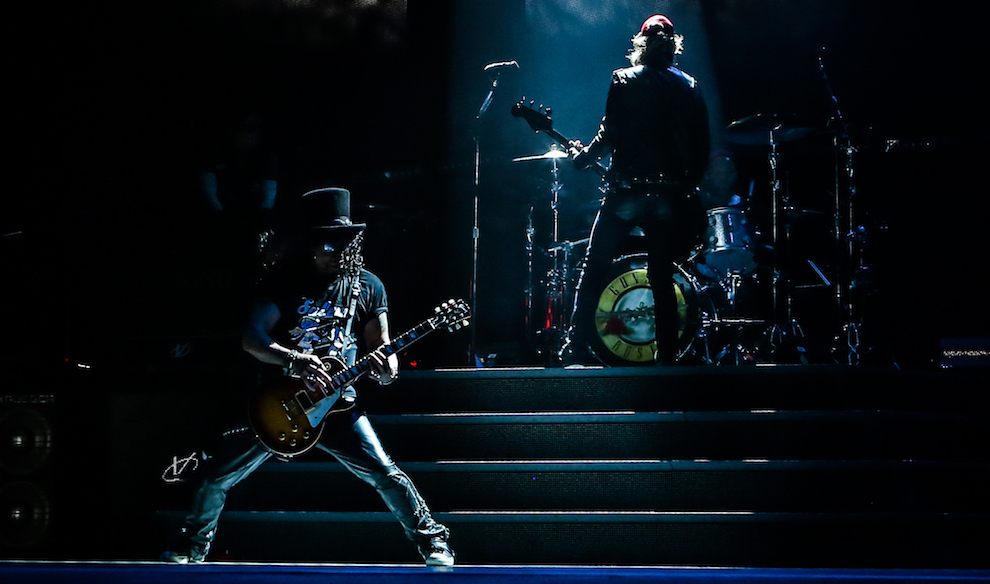 This is where some very interesting observations could be made for those who looked closely enough to read between the lines. First off, Axl Rose. Through all of the drama that has occurred with G’NR over the years, he has managed to keep a low profile, including a stretch of time in which he was completely out of the public eye. When he did re-emerge playing with a cobbled together version of G’NR, it was usually in other countries, so not in our general sight lines.

What folks did catch of him were occasionally unflattering glimpses of an aging and out of shape star whose changed look and surly demeanor overshadowed his music. On Tuesday night Rose looked, well like a 54-year old former rocker wearing decades of rock excess.

It is rather unfair to compare him to the videos from nearly 30 years ago, but since the public has not seen Axl age through the years, his indelible visage from the ‘Sweet Child ‘o Mine’ is what has stuck in the mind of the public. The stark contrast between current day and that video can be jarring. 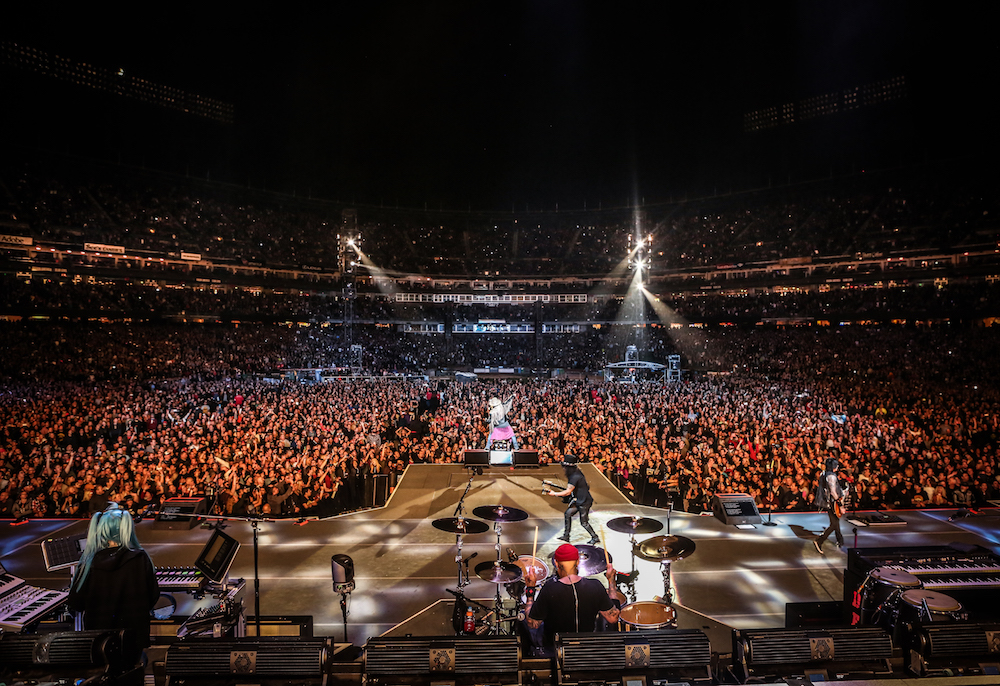 Axl’s voice is still relatively strong. Oscillating between his signature high pitched screams and lower register croons, he hit most of his marks, though less so with the ballads. He made a few wardrobe changes from traditional leather and flannel, to cowboy hats and fringed vests, and he sported Elton John/Liberace bling. Working his rock star attitude to both sides of the stadium stage, albeit toting a beer drinker’s gut, he was more apt to show Ozzy-like moves than the side-to-side shoulder dancing Axl of days gone by.

In the end Axl was just fine though, and showed enough star flashes to give the enthralled crowd the rock they craved. How could you lose backed by that band and the guitar virtuosity of Slash who can still tear it up with the best of them? His shimmering solo work at the end of ‘November Rain’ (‘Use Your Illusion I’ – 1991) was soaring and brought the house down as the epic song ended.

Oh, and there were no fights, not between Axl and Slash, not between Axl and the crowd…..no angst at all. That was definitely something notable for the show. Actually, Slash and Axl did not interact directly much at all. It was a very professional interaction, but the price for the civility was that there was not the explosive energy that came with G’NR in the early days, where their rough edge was as much a part of the allure as the music.

As the regular set came to an end with the last notes of ‘Nightrain’, fireworks colored the sky and the crowd lit up AT&T with roaring applause. Showing they still had a few tricks in the bag, and perhaps sending a subtle message to their fans, the band returned for a three-song encore that started with possibly the best song of the night, the wistful ‘Patience’ from ‘GN’R Lies’ (1988). Axl displayed his whistling chops and soothed the crowd with his ode to the very virtue that Guns ‘N Roses fans have had for decades. ‘Not in This Lifetime’ is the name of the tour, but for those G’NR fans that had the patience it was rewarded with a great rock show.

Set List: It’s So Easy | Mr. Brownstone | Chinese Democracy | Welcome to the Jungle | Double Talkin’ Jive | Estranged | Live and Let Die | Rocket Queen | You Could Be Mine | You Can’t Put Your Arms Around A Memory/Attitude | This I Love | Civil War | Coma | Band intros into Slash solo – Speak Softly Love (Love Theme From The Godfather/Andy Williams) | Sweet Child O’ Mine | Better | Out Ta Get Me | Jam (“Wish You Were Here/Layla”) | November Rain | Knockin’ on Heaven’s Door | Nightrain || Jam/Patience | The Seeker | Paradise City

For more information on Guns N’Roses, see their website.