“God, I love you, Santa Cruz,” Travis Hawley, the tousled-haired, charismatic lead singer of Night Riots said, beaming at the crowd of The Catalyst. It was a sentiment that would persist throughout the night as the rising band propelled the show into an electric synergy felt between audience and performers. 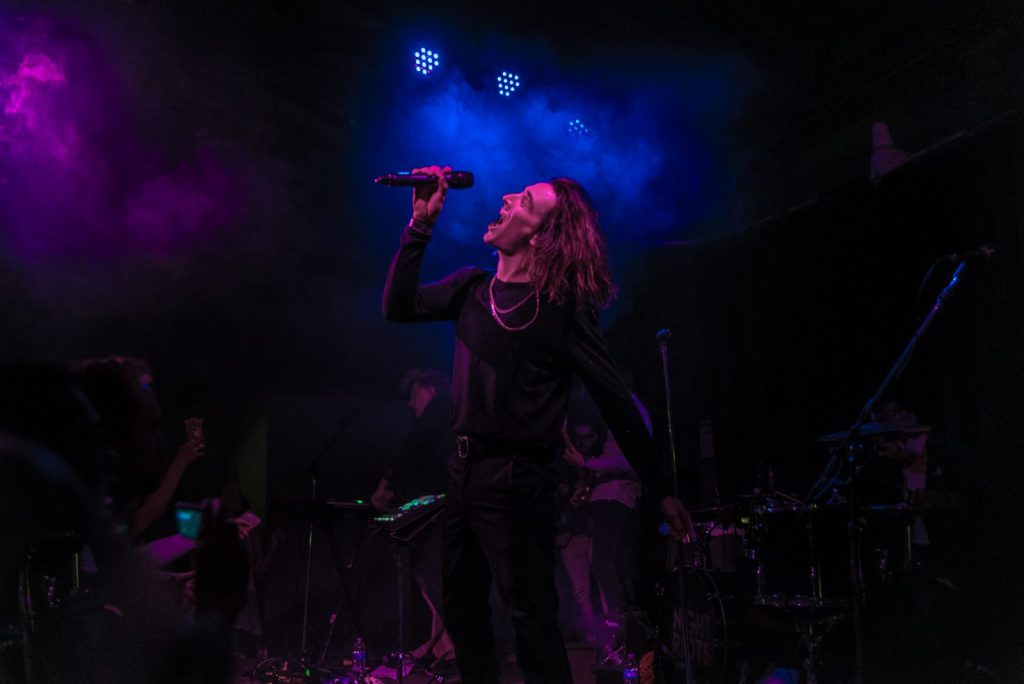 Fresh off opening for Andrew McMahon on his Zombies in America tour, Night Riots headed to the Santa Cruz venue for the first of several headlining stops before returning to the studio. The group, with Hawley on lead vocals, Rico Rodriguez on drums, Nick Fotinakes on guitar, Mikel van Kranenburg on bass, and Matt DePauw on both keyboard and guitar, brought an effortless swagger to the stage. 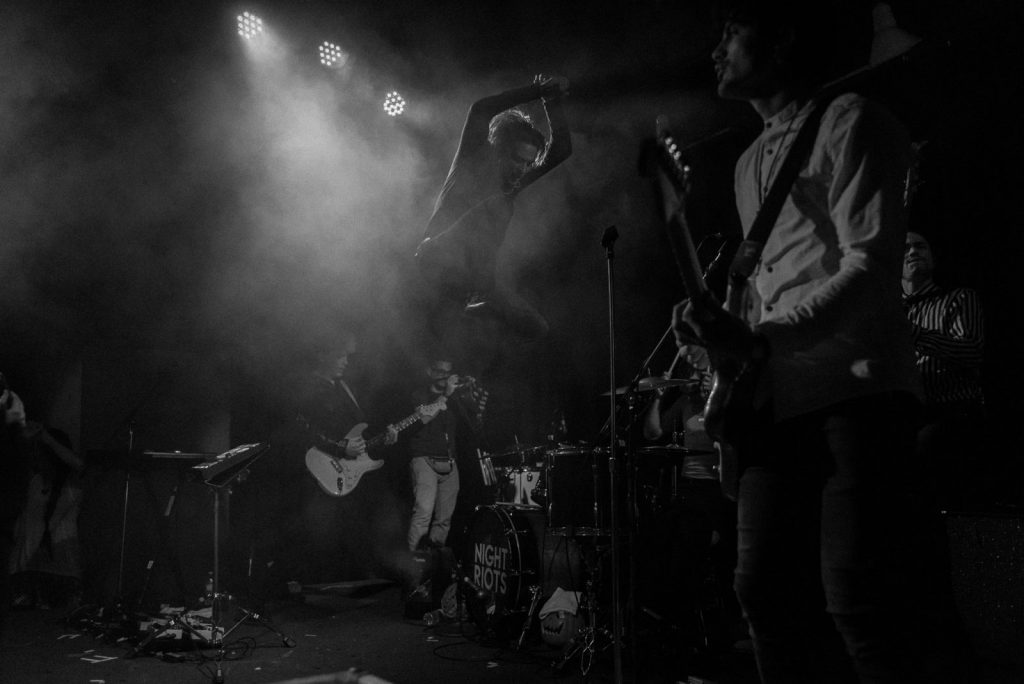 Night Riots brings a refreshing sound to the scene, with a blazing mix of atmospheric synth and glam rock hooks, tied together with Hawley’s distinct and plaintive croon. Somewhere between The Cure and The Psychedelic Furs, Night Riots’ sound is both gloomy and glistening. 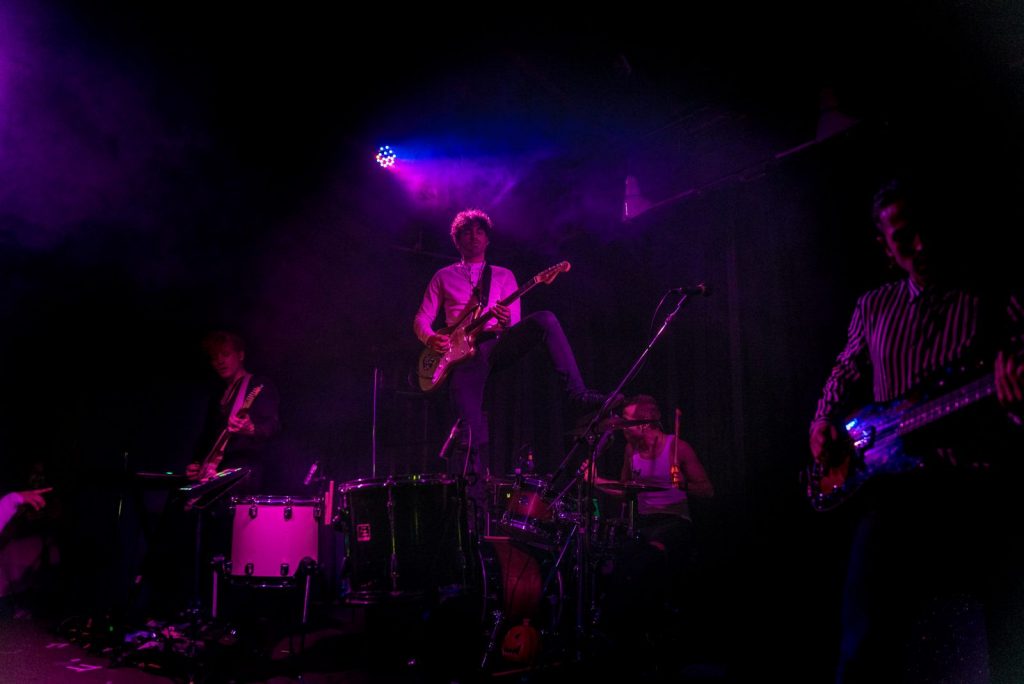 The band has perfected their gothic hipster aesthetic, looking like the cast of Interview with a Vampire wandered into Urban Outfitters, trading in their cravats and waistcoats for turtlenecks and leather jackets. A single humming bass note reverberated as they entered the darkened stage, establishing the haunting aura that envelopes all things Night Riots. 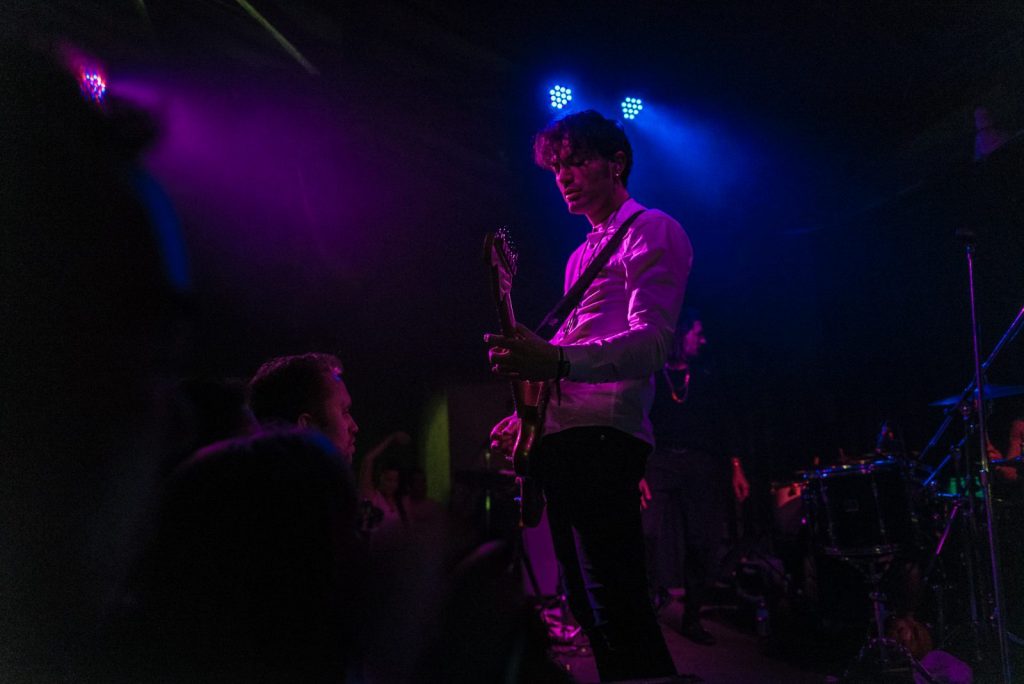 Gleaming red light illuminated the stage as the band launched into the driving drum and bass groove of “All for You.” Hawley slid easily into the falsetto of the chorus, navigating both song and stage with impeccable ease. Dreamy, electropop “Break” followed, with expansive vocals and shimmering synth that would find itself right at home in any Then Jerico concert. Hawley, perpetually sporting a small smirk, worked the crowd with instinctive skill. Suddenly dropping to his knees, Hawley would imploringly sing to the audience, much to the delight of those with whom he was face to face. Furthering the band’s retro sound was a brief cover of “Melt With You” woven into “Break.” 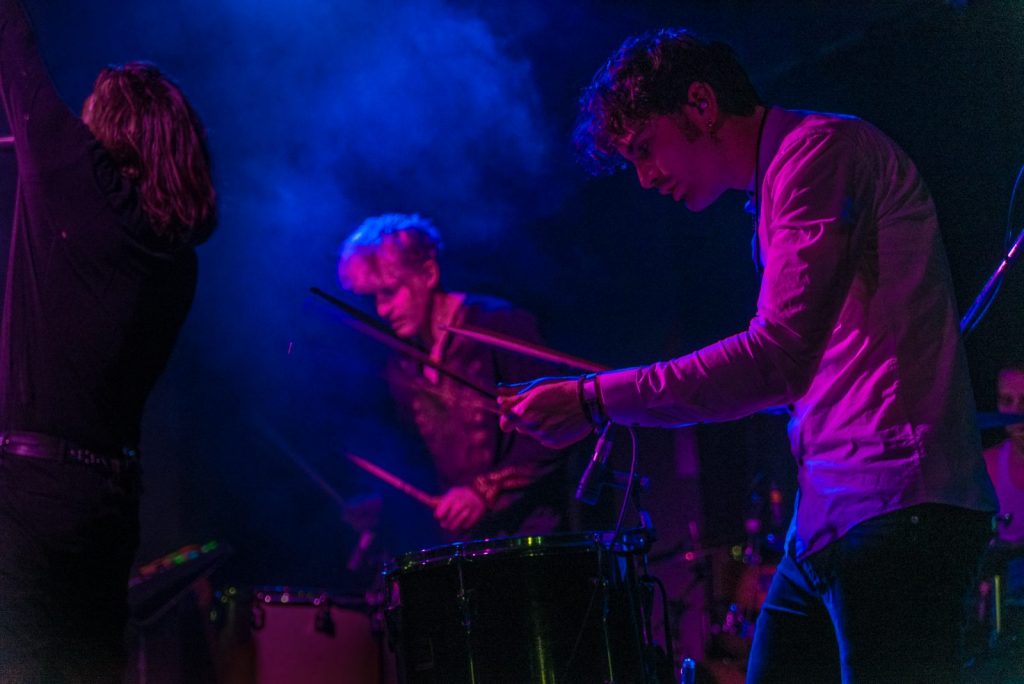 Next up was creeping and moody “Nothing Personal.” Simultaneously dark and catchy, the bouncy track compelled the audience to sing along with Hawley in the fervent chorus. “Oh My Heart” came next, an obvious highlight of the evening. Fotinakes and DePauw brought boundless energy to the floor toms, punctuating Hawley’s vocals with percussive intensity. The real treat for the audience came midway through the song, when the stage darkened and five sets of LED-lit drumsticks began a manic, tightly synced drum interlude. 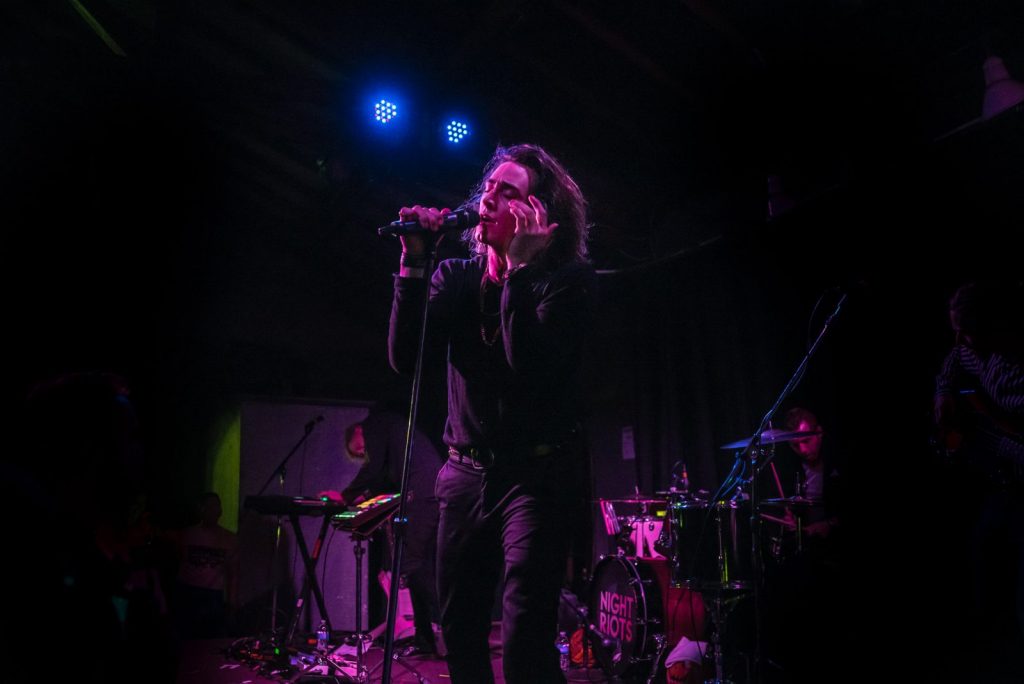 Hawley carried himself with the confidence and infectious charm of a frontman with years more experience. Not only did the young singer handle the demanding vocals of “Sunday Bloody Sunday” flawlessly, he navigated the stage with unapologetic vivacity and dancing bordering on tantric. He encouraged the crowd, saying “We’ve got an hour in this room to lose our minds.” With Hawley’s hypnotic example as he slinked and twirled around the stage, it was difficult for the crowd not to follow his lead. 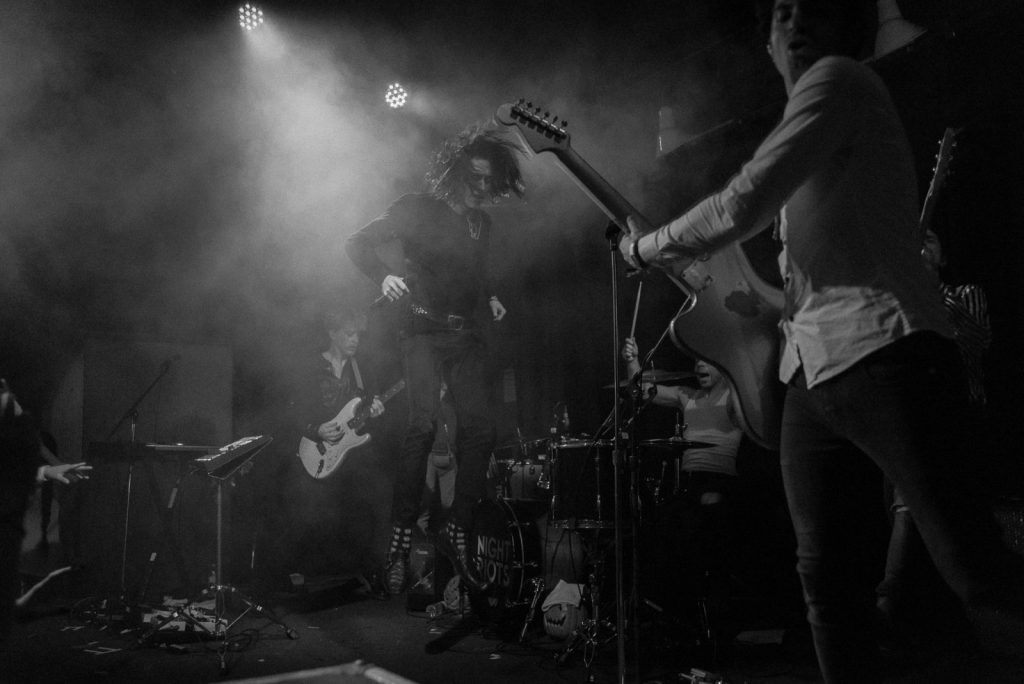 The show then hit several technical snags with the backing tracks, forcing the band to improvise. Night Riots embraced the uncertainty with grace, laughing as Hawley asked the audience, “Wanna do Fangs?” and asking for patience because “we haven’t done [Fangs] in like five months.” It didn’t seem to matter. The contagious glam-rock song was as polished as the rest of the set. 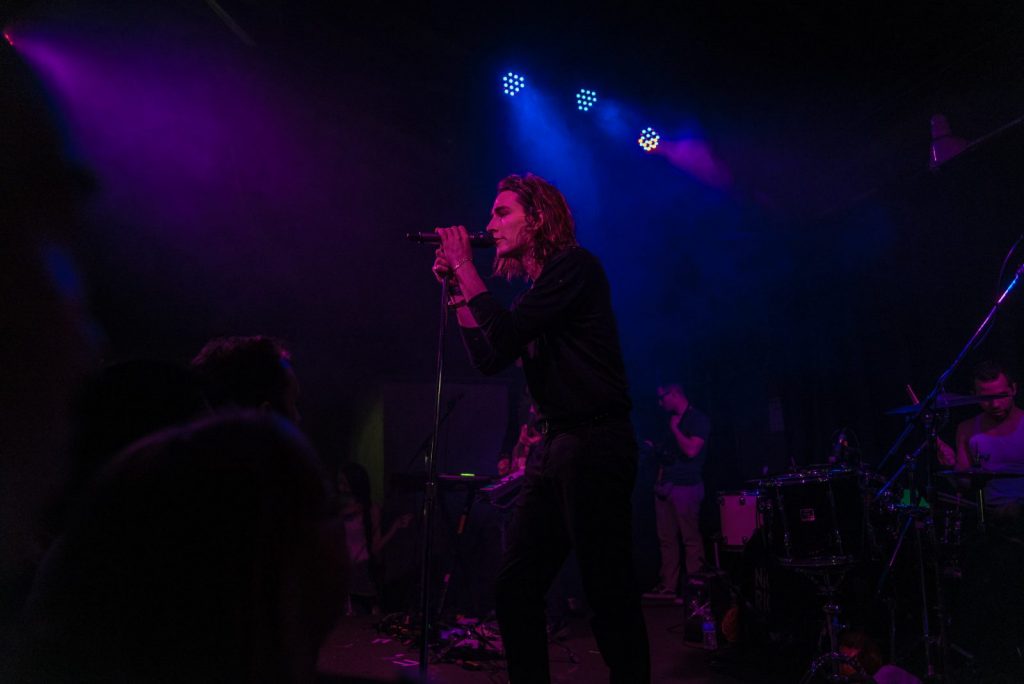 Hawley’s infectious allure easily coaxed the audience to dance along to expansive synth ballad “Pull Me Down” as he guided the crowd to crouch to the floor, exploding into a rowdy, writhing mass at the chorus. Audience participation continued with “Take Me Back to Your Love.” Hawley led the crowd in a call and response, unbridled happiness on the band’s faces as the fans obliged. 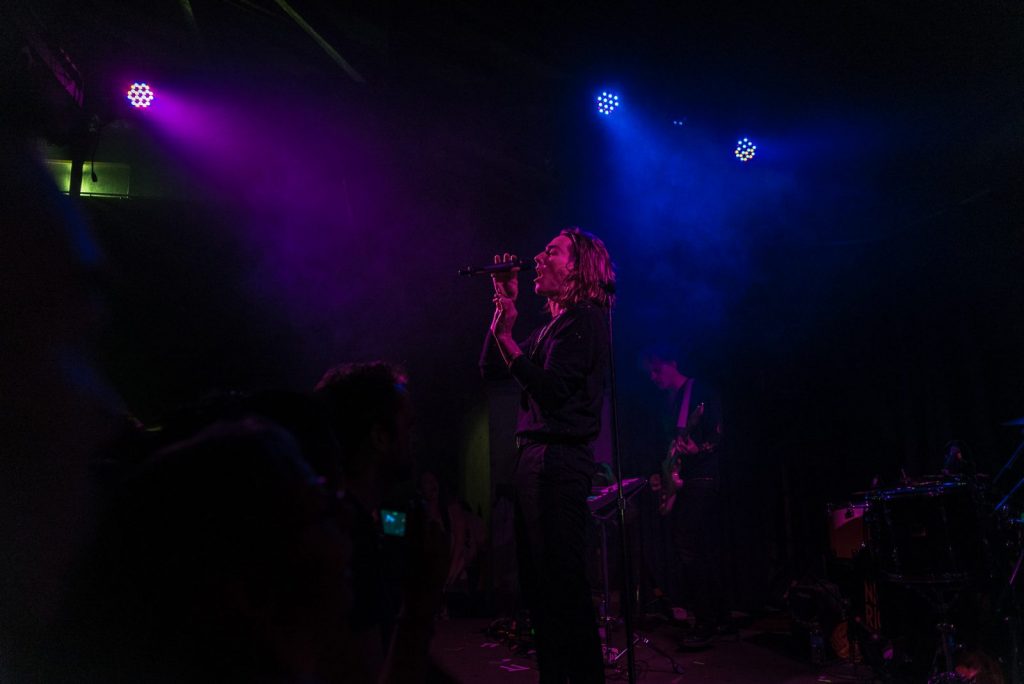 The imploring lyrics of “Breaking Free” started the encore, but the veritable show-stealer came with eerie, explosive “Contagious.” Easily one of Night Riots’ most well-known songs, the track features all of the most characteristic elements to the band: haunting croons crescendo-ing into a soaring, gritty chorus, and an irresistible backing groove. The quintet settled into the song with a practiced saunter, drinking in the frenetic enthusiasm of the crowd. Through the chorus of resonating voices singing along to every word, to the mob of fans waiting after the show to chat with the musicians, to the band’s humble gratitude to each and every patron in that small, smoky venue, one thing was quite clear: Night Riots loves Santa Cruz, and Santa Cruz loved them right back.

Opening for the evening was rock band Silent Rival. Headed by Sara Coda, the LA natives started the set strong with a collection of stomp-worthy, guitar-driven tracks. Coda’s long brown hair swung carelessly in her face as she headbanged her way through the sometimes punk, sometimes grunge, and always-enjoyable performance. Impressive guitar solos, cheeky banter, and Coda’s impressive belt made Silent Rival a perfect opening pick.

Setlist:All For You | Break (feat. cover of Melt With You) | Nothing Personal | Oh My Heart | Sunday Bloody Sunday | Everybody Wants to Rule the World | Fangs | Follow You | Pull Me Down | Back to Your Love | Breaking Free | Contagious

For more information on Night Riots, see their website.