With his recent sold-out show at the Greek Theater Nick Cave has proven once again that he is still a compelling and enigmatic performer. Born and raised in Australia, Cave has had a prolific career involving music, writing, acting, and screenwriting but he’s probably best known for being the lead singer and songwriter for Nick Cave and the Bad Seeds. The band was formed in 1983 by Cave and multi-instrumentalist Mick Harvey, and guitarist Blixa Bargeld following the breakup of Cave and Harvey’s post-punk band The Birthday Party, whose former members met in boarding school. The band has featured numerous lineups over the years and produced 16 studio albums, all worth giving a listen to if you haven’t already, that blend a unique variety of atmospheric goth rock, post punk, rockabilly, free form jazz and blues into its own unique sound that has Cave’s deep soulful voice and dark and humorous lyrical story telling at its center, layered over lush arrangements with strings, bass and drums. 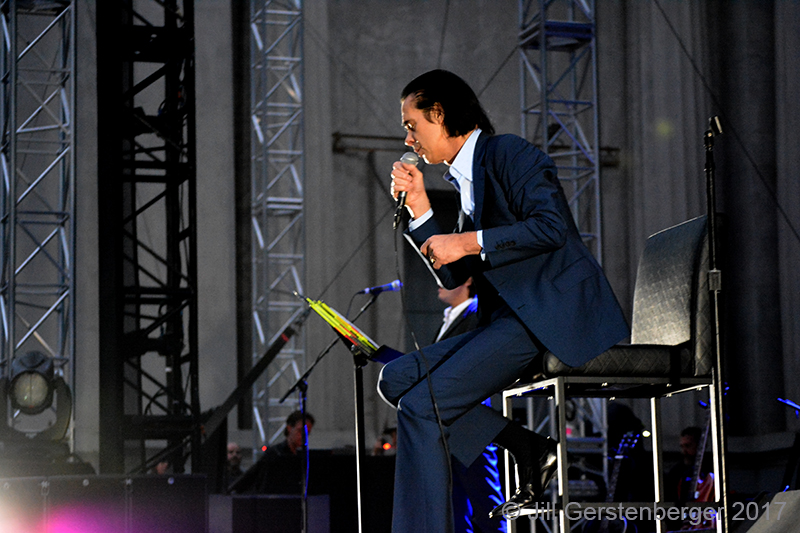 Cave is attracted to dark and deep subject matters that touch on religion, death, sexual perversion, love, and loss but he still manages to seem oddly positive, perhaps by adding humor to his songs. He has a cult-like following that devours everything he produces with loyalty knowing no bounds. He’s known for his stage performances where he can go from a dark melancholy to where he is on the verge of losing all control, but the whole time commanding the audience. It almost seems he has taken his religious background as a choir boy and transformed the concert stage into a well-crafted sermon that uses his songs instead of hymns. 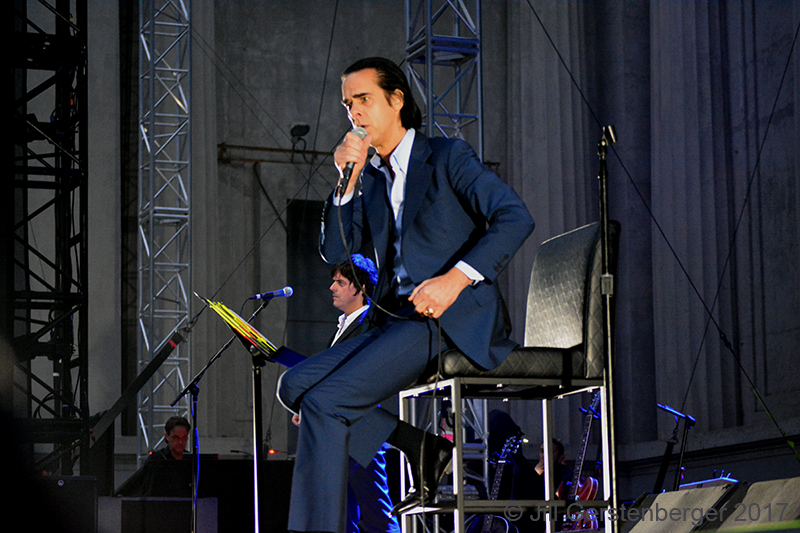 On this balmy but chilly night in Berkeley, Cave was in top form with the crowd eating out of his hand. He started the set sitting on a stool and performing a haunting version of the song ‘Anthrocene’ off his new album Skeleton Tree. Long time Bad Seeds members Warren Ellis and Martyn Paul Casey were spotted accompanying him on piano and bass respectively. Cave performed two more songs off the new album, ‘Jesus Alone’ and ‘Magneto,’ and although they are slower than his older hits, the new songs have depth and feeling and seem to be a reflection of Cave’s introspection over the recent tragic loss of his son. In ‘Jesus Alone,’ the chorus of “With my voice I am calling you” is repeated over and over with just violin, a few piano chords, and some background choral voices. It was very poetic and touching. 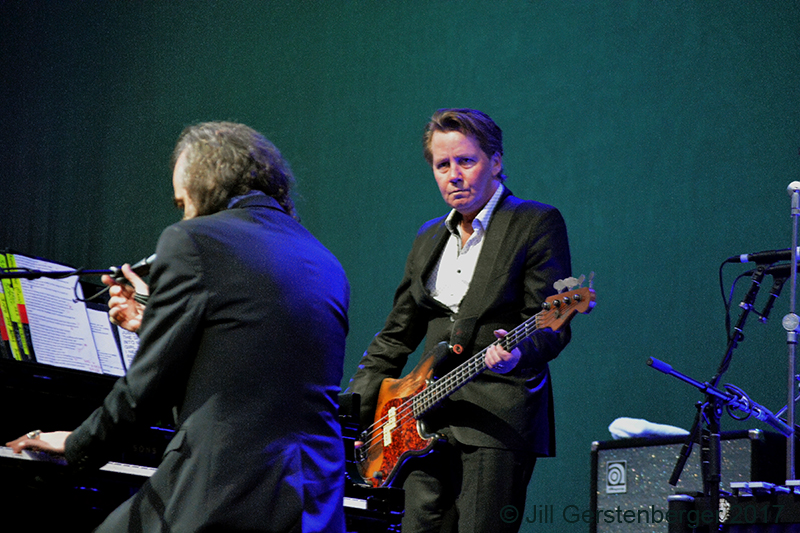 Cave then went into hits ‘Higgs Boson Blues’ and ‘From Her to Eternity,’ where the singer showed his first glimpse of classic Cave, pacing quickly on the stage, kicking his knees in the air, leaning over, and touching the hands of the audience members, yelling and growling, reaching a crescendo when he threw the live microphone on the ground. It was a defining moment. He then went in to a few more classics, the bluesy ‘Tupelo’ and ‘Jubilee Street.’ Cave climbed out on to a few strategically placed tour cases that were set in front of the stage and a few lucky people in the front rows got to encircle their idol and touch his legs and hands. Meanwhile, the energy in the crowd continued to rise as they sang along to his hits. Cave climbed behind the piano and played a few songs, ‘The Ship Song’ and ‘Into My Arms’ (a particular fan favorite), and ‘Girl In Amber.’ Cave did a lovely version of ‘I Need You’ before the stage lights went to red and the crowd went crazy over the delightfully creepy and perverse ‘Red Right Hand,’ while Cave climbed into the audience on stage right. He made some hilarious lyrical changes that referenced the current president, “You’ll see him on the internet, You’ll read his angry tweets….” that had the crowd roaring. He did a version of another new catchy song, ‘Skeleton Tree,’ that had the crowd singing along and also had some hints of Cave getting political before ending the main part of his set. 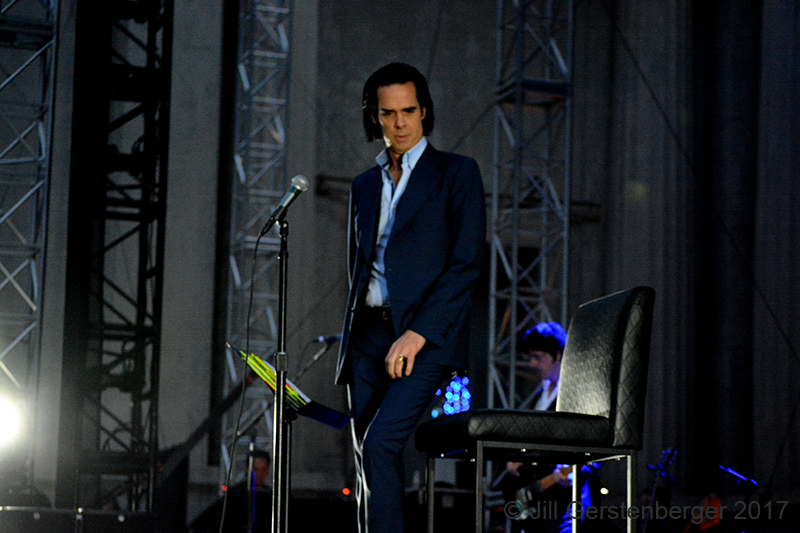 When Cave and crew returned to the stage for an encore, the crowd was using cellphones as replacements for old school lighters and Cave seemed taken aback, saying “That’s very cute. That’s never happened before. Now I know what it feels like to be the singer of Cold Play. It feels great!” He quickly went in to a rousing version of ‘The Weeping Song’ where he hopped offstage and wandered deep into the crowd by himself with the mic and walked almost to the sound board. They did an incredible effect where live images of Nick in the crowd were projected on a screen onstage behind the band. At the end of the song there was a hilarious moment where he said, “I don’t know what to do now,” and he just turned around and walked slowly through the crowd back to the stage. He then continued on to pull hundreds of people from the crowd up on stage with him to do a thumping version of ‘Stagger Lee.’ It made the venue seem much more intimate then its 5800 seats would imply. Cave ended the set with the slower song, ‘Push the Sky Away,’ which was another crowd singalong, before saying goodnight. 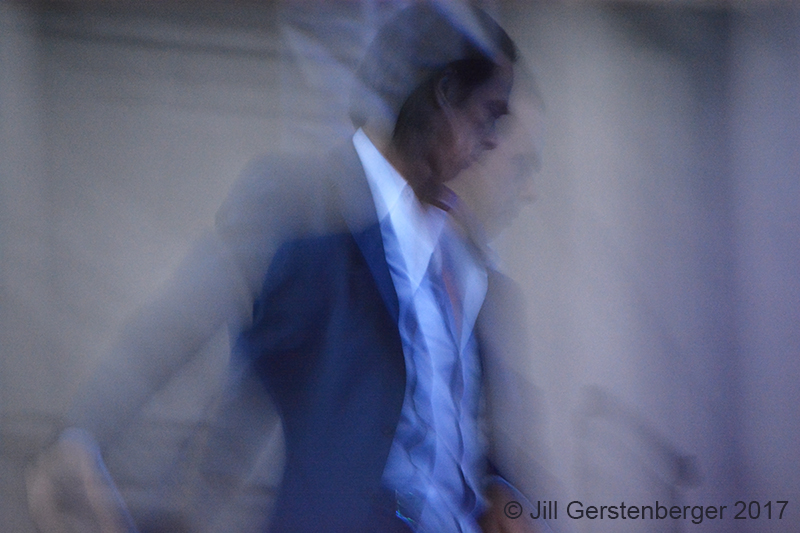 If you haven’t had the chance to see Nick Cave perform it is highly recommended that you do. His highly charismatic appeal and command of the audience are something you don’t see every day. He is truly a master at his craft.

For more information on Nick Cave, see his website.