By the time the Queen of Bounce hit the stage, thunderous bass shook the floor of Berkeley’s UC Theatre and a roaring crowd were already shakin’ that ass. Three backup dancers, dressed in black booty shorts and leopard crop tops, started gyrating behind Big Freedia, bending over and twerking to the beat. It wasn’t long before a spotlight lit up a ledge on the side of the floor — a nearly-naked dancer bent over and shook from above. The crowd went nuts. 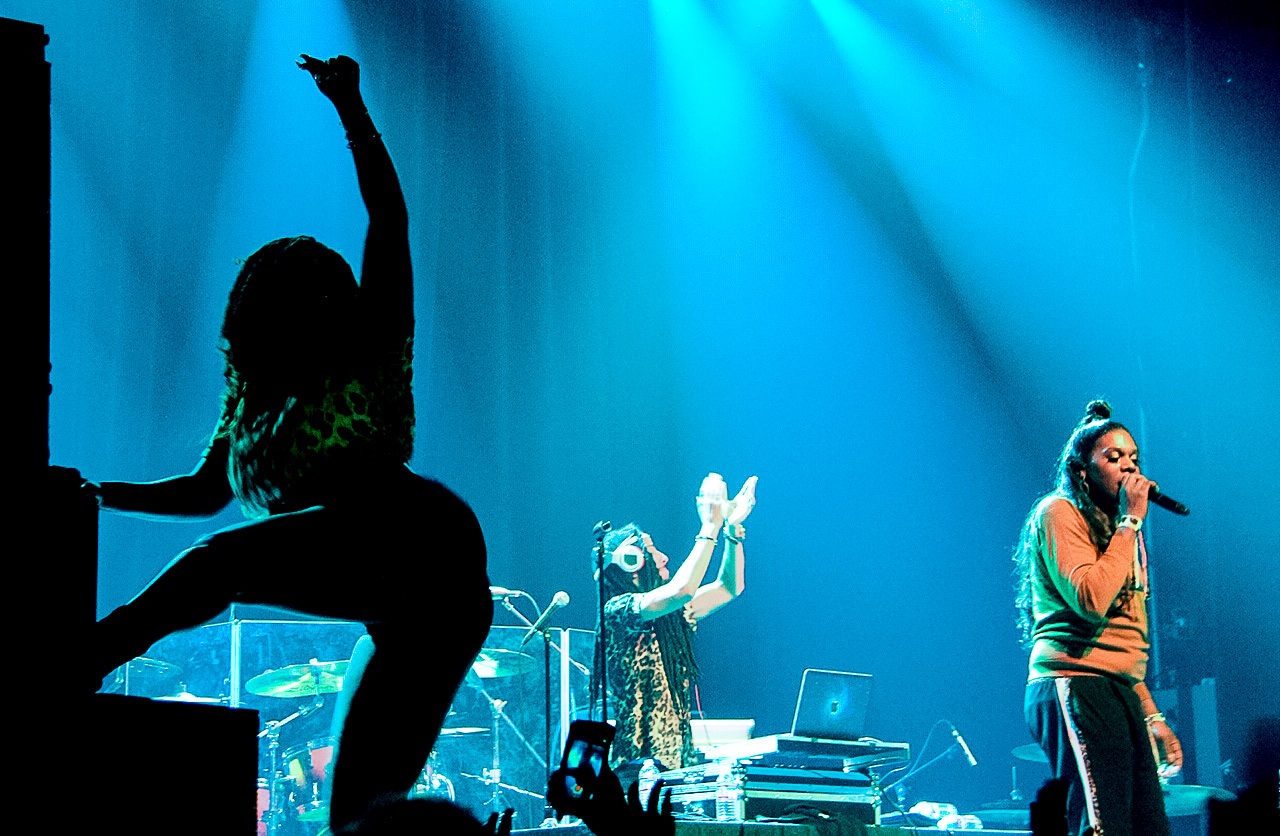 The room was humid within minutes as the crowd busted out their most risqué dance moves to new anthem “Karaoke.” A backup singer belted out the chorus as dancers moved in synch — dropping it low, throwing their hands in the air, and smirking at the crowd. 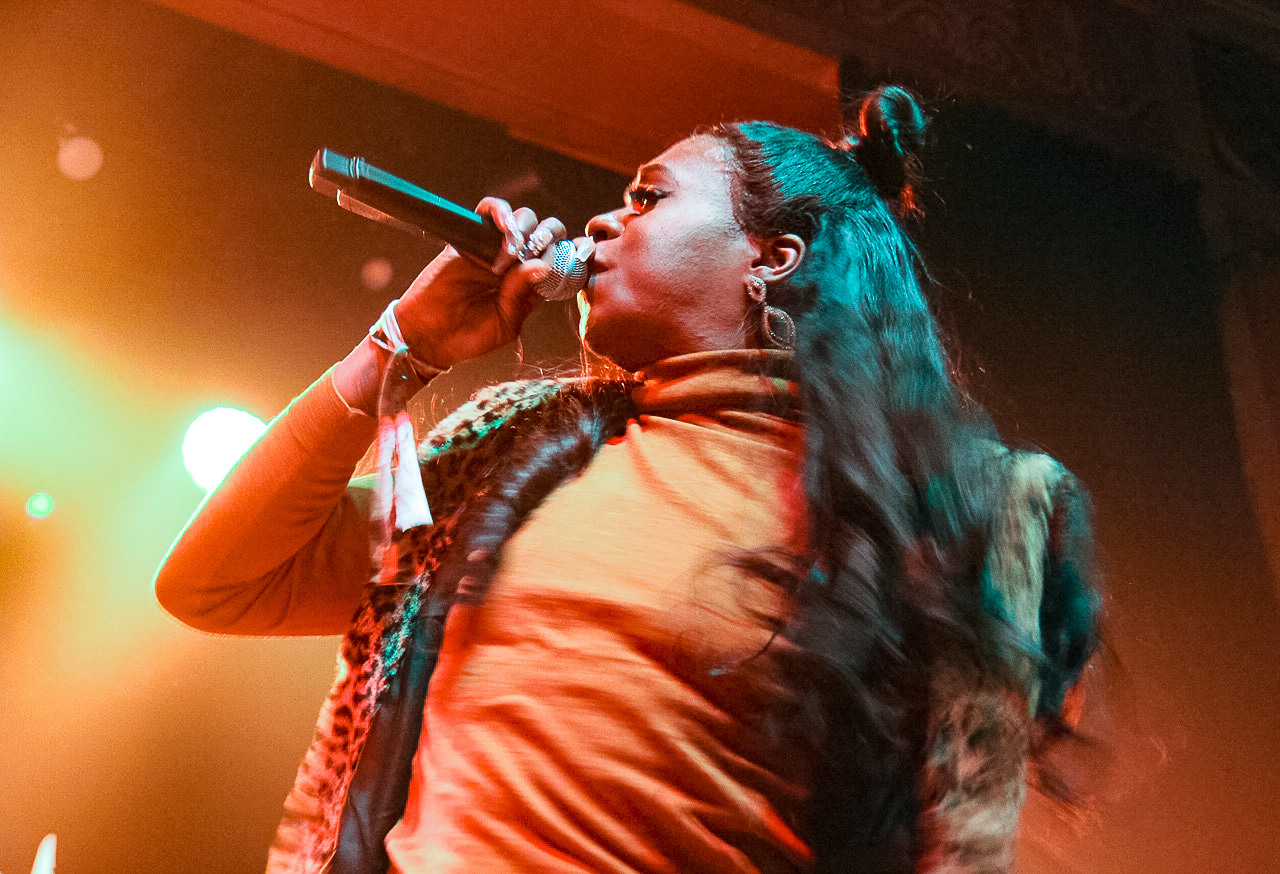 It wasn’t long before Big Freedia invited fans to join the party. People frantically ran forward; soon the entire stage was packed full of bouncing fans. A young man unzipped his red leather jacket and threw it before scissor-splitting midair, hitting the stage, popping up, and twerking on point. One-by-one, fans gave it their all — some more literally than others. One woman spun in circles, her top fell, and she bared all before a sold-out crowd. 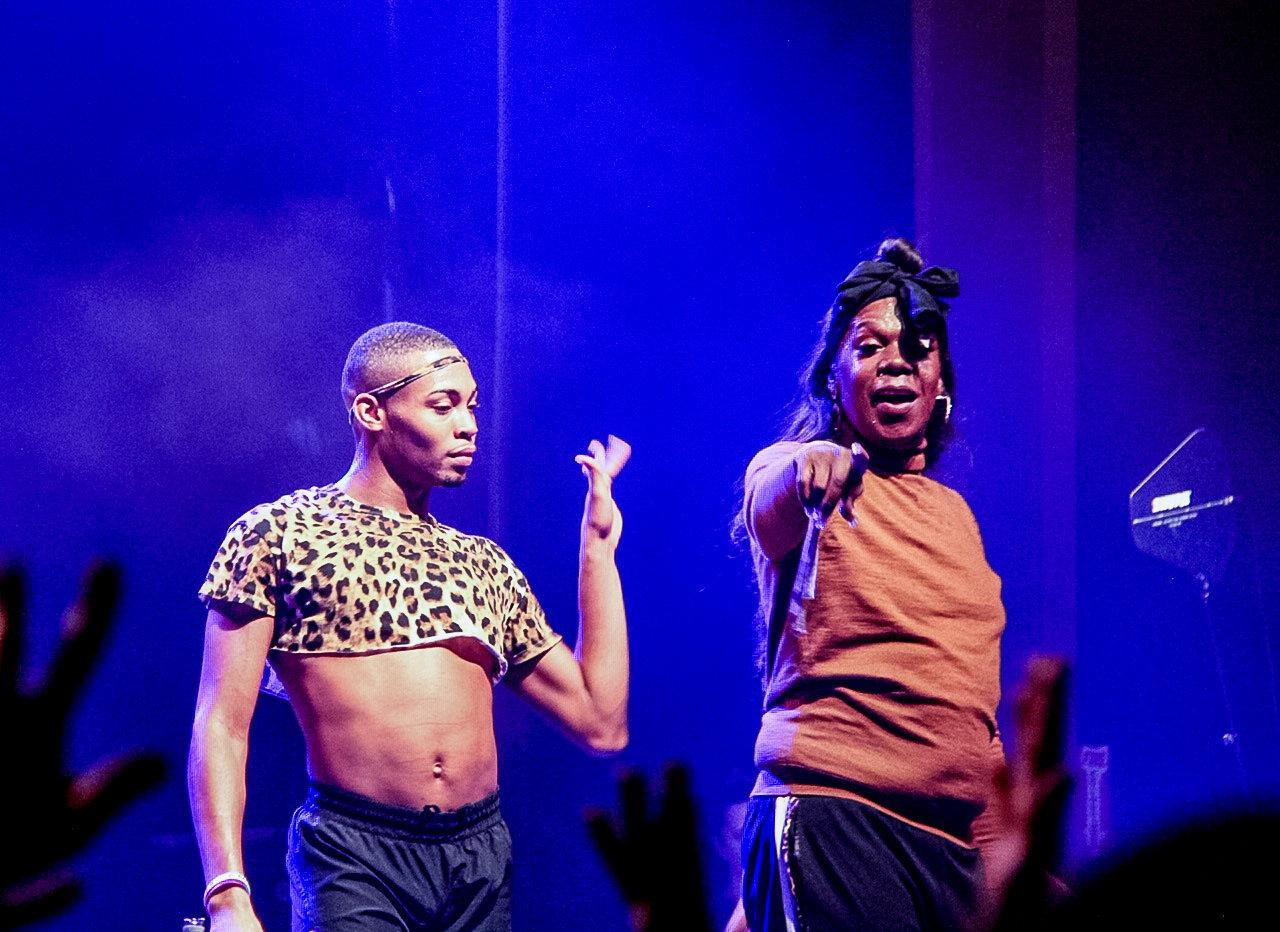 A Big Freedia set is interactive, liberating, and accepting. It’s about loving your body, getting wild, and having fun. The New Orleans-based rapper is undeniably impactful. She’s credited with popularizing Bounce Music, which was largely underground since the 1990s. She’s been a performer since birth, first singing in her neighborhood Baptist church choir; later releasing her first studio album Queen Diva in 2003. This year she released her latest EP, Third Ward Bounce. 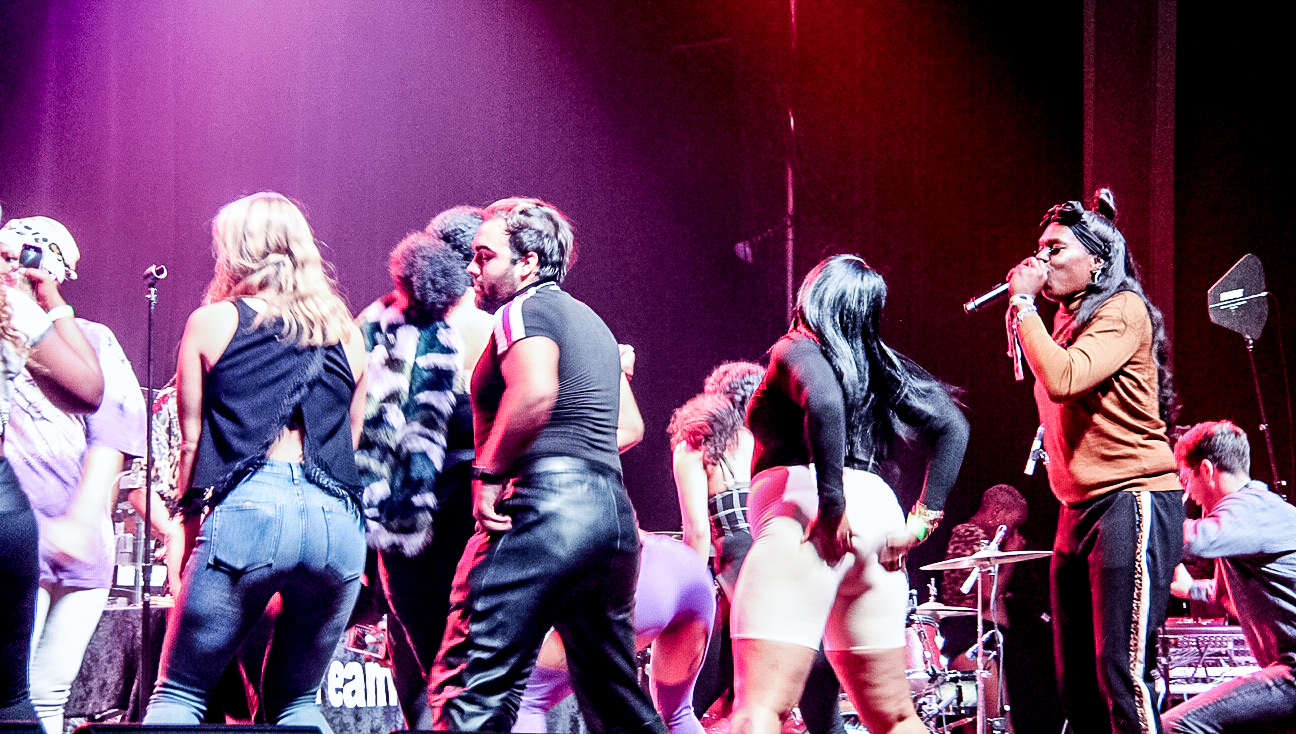 Freedia continues to touch people with her contagious energy and love of self. She brings her hometown with her wherever she goes, sharing bits and pieces of what makes New Orleans culture, history, and music so special. In turn, she’s become one of the biggest voices in the south. She takes the pain and suffering experienced in New Orleans and flips it on its side. She’s also a symbol of love within the LGBTQ community. Though her music is for everyone — listeners of all genders and sexual identity. 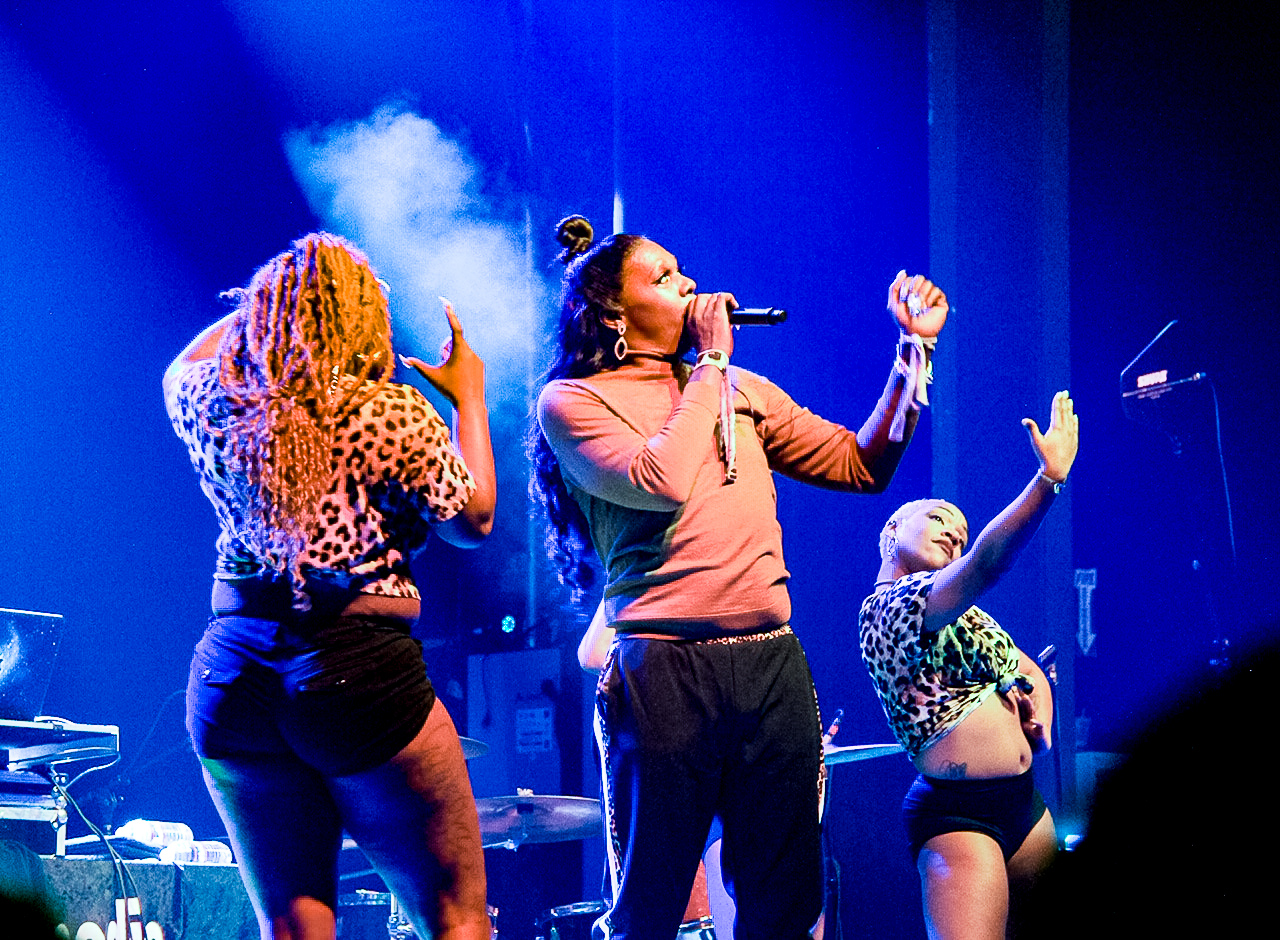 “I am so grateful for this moment to share with y’all because we never know when we’re not going to have these moments,” Big Freedia said to the crowd. “Spread love, peace, and happiness.” 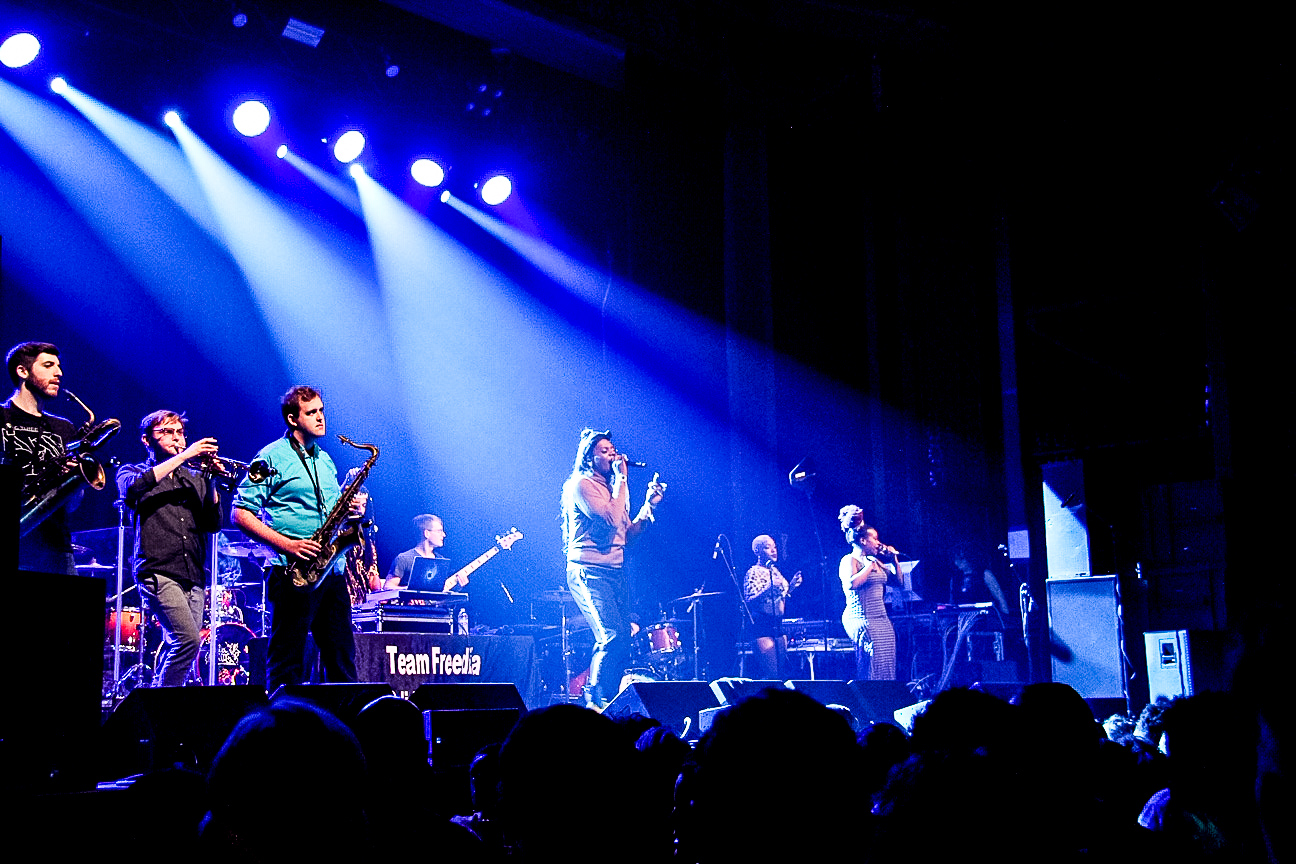 She played hits like “Azz Everywhere,” welcomed openers Naughty Professor’s horn section to join the fun and closed her set by covering Dolly Parton’s “I Will Always Love You.”

Big Freedia and her posse weren’t the only ones brining southern flavor to the stage. Co-headliner Tank and the Bangas’ electric energy radiated throughout the room. Frontwoman Tarriona ‘Tank’ Ball walked toward her mic; two backup singers followed suit. All three were draped in black robes and giant panda heads. It wasn’t long before they disrobed, lights hit the stage, and it was time to party.

Sax players Albert Allenback and Etienne Stoufflet headbanged as Ball belted out the high notes. Everyone danced, jammed, and dropped it low, switching it up from playing funky originals to highlighting Ball’s spoken word. Their music is hard to categorize, as they pull from elements of soul, hip-hop, and gospel. Backup singer Anjelika “Jelly” Joseph even invented her own genre, Soulful Disney, and the entire band is inspired by anime and its “magical sensibility.”

The New Orleans-based group hit it big after winning the 2017 NPR Tiny Desk Contest and became an internet sensation. However, the group began their musical journey in Louisiana, first playing an open mic set at Liberation Lounge in 2011. Two years later, they played a live performance at local radio station WWOZ. Today, they’re touring the country and carving out their own path.

It’s not just Ball’s voice that’s powerful and versatile. It’s also her method. Her movement. Tossing her long curly hair from side to side, she grooved to her own beat. Then, she’d robotically prance around stage, stopping to stare wide-eyed and doll-like. You couldn’t keep your eyes off of her, yet you always noticed the flamboyant, vibrant energy that was unfolding all around her. Tank and the Bangas rely on each other to create a unique sound, even if Ball acts as Queen Bee.

Ball cocked her shoulders left and right, her childlike high-pitch voice singing along to “Spaceships.” Her pitch dropped low for the chorus, the band hyping up every change, every shift in sound. People cheered and sang along for “Smoke.Netflix.Chill.” And they watched quietly, leaning back and absorbing “WalMart,” a piece of live poetry that demands your attention. It was an emotional ride. With only two albums in the books — Think Tank (2013) and The Big Bang Theory: Live at Gasa Gasa (2014) — it’s exciting to image what these barrier-breakers will do next.

The band met in 2010 while students at Loyola University’s jazz program. Soon after graduating they started touring, recording their first studio album Until Next Time in 2013, Out On A Limb in 2015, and In The Flesh in 2016. Naughty Professor create though-provoking music that mixes elements of jazz and pop. Their fresh vibes have landed them spots on the stage next to artists such as Galactic, Snarky Puppy, The Revivalists, and more. They were the perfect fit for a bill chalked full of all things New Orleans.

Find out more about Tank and the Bangas on their website.