Influence and integration has long been a tradition of heavy metal. In recent years, the genre has split so many different ways, it’s sometimes difficult to keep track. Technical or progressive death metal is no exception. Spawn from the depths of Florida and our very own San Francisco, greats of the dark arts such as Death (FL-1983), Possessed (CA-1984), and Cynic (FL-1987) have paved the way worldwide for many other stylistic death metal genre bands. Recently formed death metal bands now put their own creative spin on its interpretation, but a few things remain – the raspy, growling vocals, and a dark, reflective lyrical content. Conjoin these elements with the technical expertise of a classically or jazz trained musician, and you have a newer, more progressive death metal sound. Ne Obliviscaris (pronounced; Nay Ob-li-vis-kar-is) from Melbourne, Australia, and Black Crown Initiate from Reading, Pennsylvania, are two such bands. 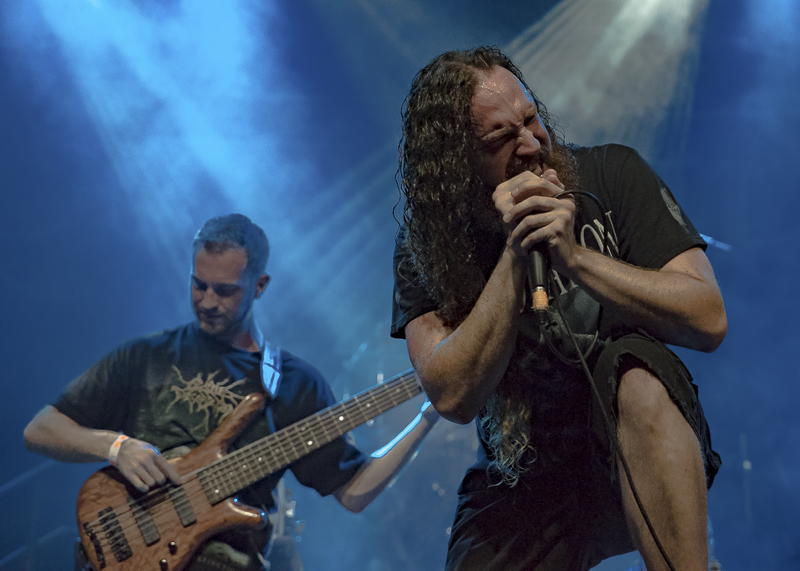 Touring with Chicago-based Starkill, both Black Crown Initiate and Ne Obliviscaris exploded on the DNA Lounge stage with a story-like, doom technique, each band complementing the other, very similar in style, but unique in their own way. 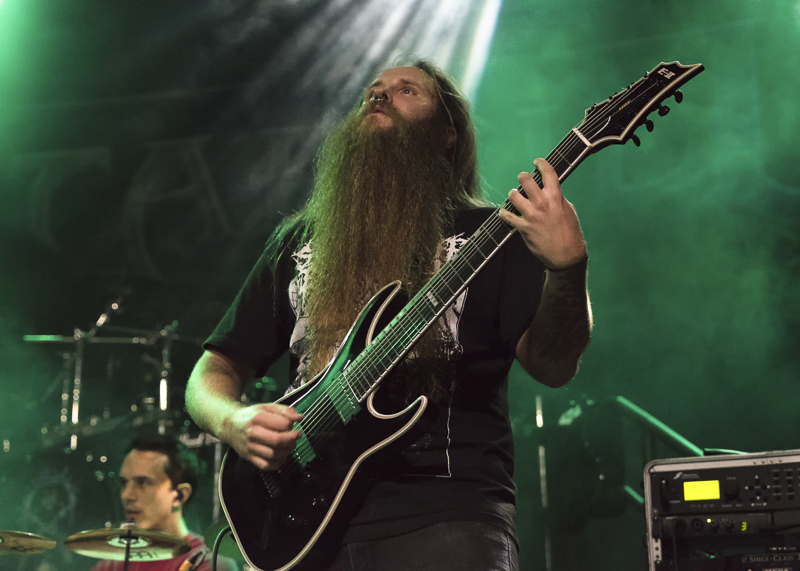 Black Crown Initiate performed with the controlled fervor of a tightly wound vine consuming a giant redwood; its dense canopy surrounding, climbing, attacking the heart of the tree with precision, but not able to kill the massive beast in the end. James Dorton’s range covers the deep, dirty growling techniques that are the signature of a Death Metal sound, engaging the audience by taking hold vocally, and pulling their energy into each song. Drummer Jesse Beagler takes a page from Snake of Voivod fame, with his incredibly skilled double bass on a single drum, patterning his extreme beats with a fast but intentional technique. Guitarists Andy Thomas and Wes Hauch (formerly of The Faceless) squealed the high notes with a unique melodic yet meticulous announcement, and notably skilled bassist Nick Shaw lightly scaled his bass with seemingly impossible ease. All in all, Black Crown Initiate is a band with incredible technical skill and nebulous style. 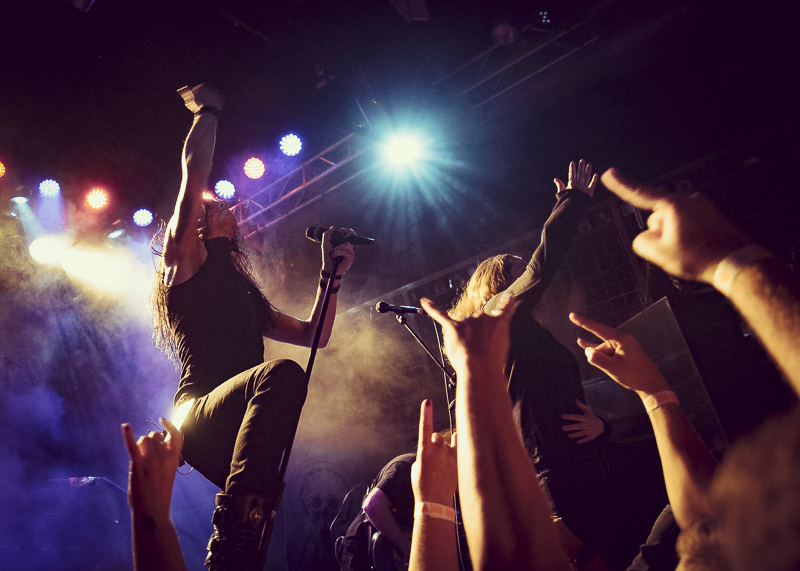 In June 2014, Ne Obliviscaris, a signed and fairly seasoned band in Australia, discovered that they were properly funded by their label to create the latest album (The Citadel) but they couldn’t afford to do the extensive touring necessary to sell said album and potentially broaden their fan base. Harkening to demanding fans all over the world, the band decided to put out a Crowd Funding campaign. They asked their fans to contribute the sum total of $40k, which was necessary to complete tours in South East Asia, Europe and the U.S. Ne Obliviscaris had 60 days to raise the money; their goal was reached in 38 hours. This was an unprecedented response, proving that their fan base in their native country, and elsewhere, was incredibly strong. It also obviously gave them yet another reason to tour other countries. 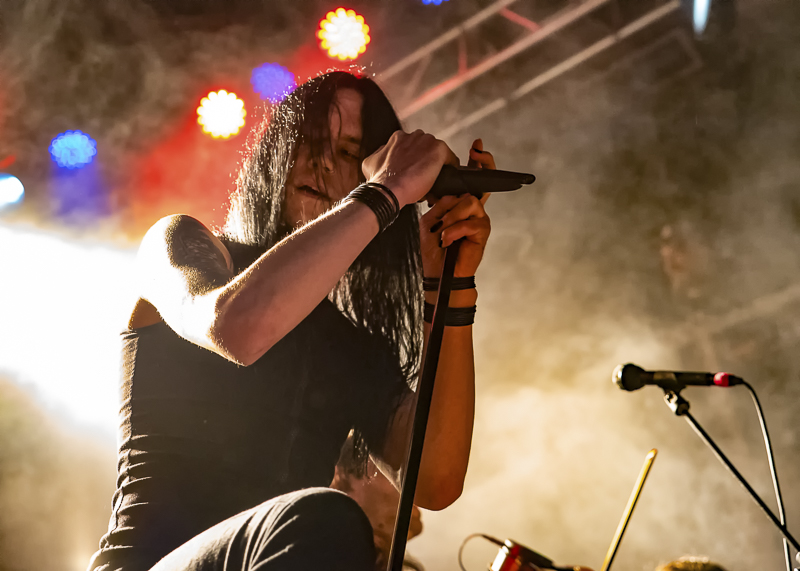 This one eve in San Francisco was their second pass through the bay area on tour in 2016, the first time opening for Cradle of Filth and Butcher Babies earlier in the year. Xen (Lead Vocals & Lyrics), Tim Charles (Violin & Clean Vocals), Matt Klavins (Guitar), Cygnus (Bass), Benjamin Baret (Lead guitar), and Dan Presland (Drums) gracefully accosted the stage with a fast, dark, and melodic tune – Devour Me Colossus: (Part 1) Blackholes. They continued an onslaught of intense, drama-filled songs over their 45 some-odd minutes on stage, each song spanning an incredible average of none minutes long. Like a Grimm Fairy Tale that builds and devours itself in front of a faction enthusiastic listeners, the dueling, feverish vocals of Xen and Tim, were staunchly complemented by the singing of Tim’s violin and the aggressive low-rest fill of Dan’s drumming. Their music lifted and pulled the audience into an almost hypnotic state, leaving them in a state of complete euphoria by the end of each song. 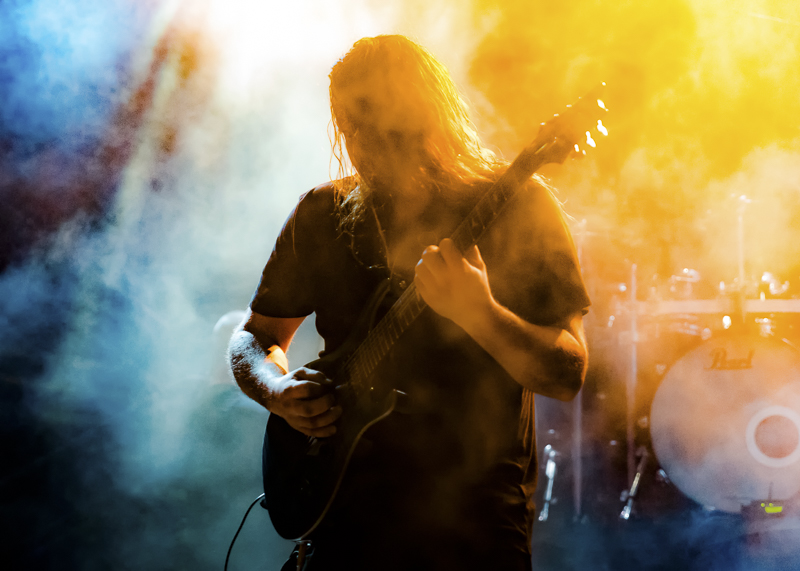 Ne Obliviscaris is Latin for “Lest you may forget.” Experiencing this band’s set is not likely something any death metal fan will forget. Much like the first time you listen to Opeth’s Blackwater Park. Simply epic.

For more information on Ne Obliviscaris, see their Facebook page.