Great entertainment does come cheap. Listen, you don’t have to pay a lot of money to see quality music. If we’ve learned anything from a certain Bahamian music festival, the cost of a good time won’t break the bank. To see Moon Hooch, you had to let go of just one Andrew Jackson. That’s it. Moon Hooch delivered the rest. 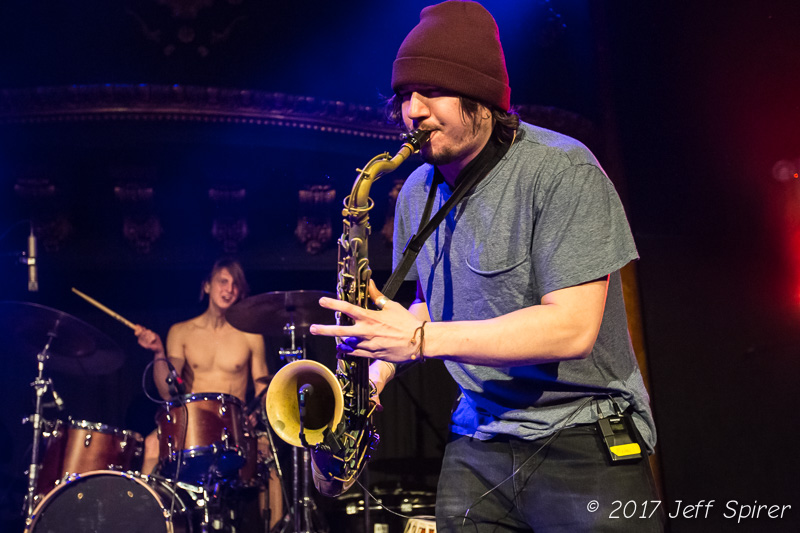 The music of Moon Hooch is a mix of nu jazz and electro fusion. A New Orleans dance party on the moon, rather. Actually, I’ll let one of its members explain their sound, “We’re kind of like post-Christian speedcore/industrial meets stoner/environmental punk jazz with a hint of country/fusion heavily influenced by hindustani classical music and K-pop. Definitely a twist of early 2000’s trad emo electro-doom in there.” That was Mike Wilbour, one of two saxophone extraordinaires in the band. I interviewed the Wilbour on the trio’s roots and how they rose to fame. 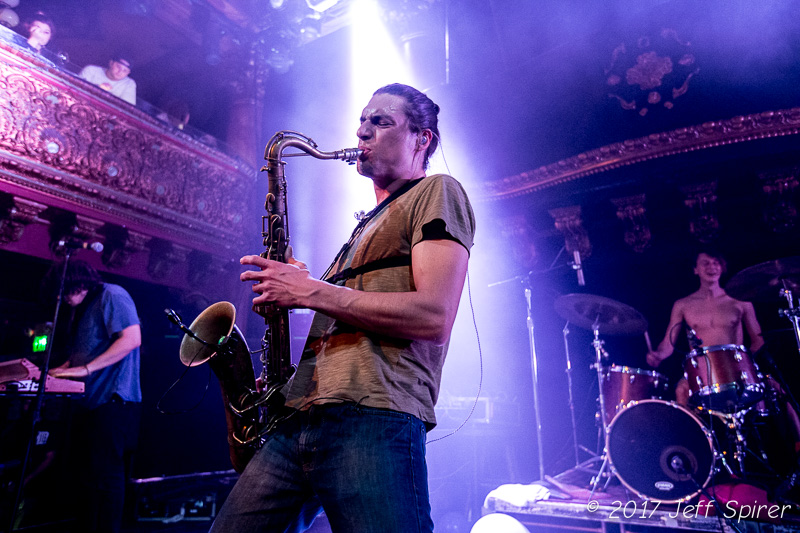 Starting in New York City subways, Moon Hooch played a signature sound of high powered saxophones and thumping drums whether you wanted it or not. In fact, their music caused one New Yorker to shove her umbrella in Wilbur’s horn. Yet, they still carried on. Not too long after, the boys found themselves playing a spot at one of NPR’s Tiny Desk concerts for its lucky employees. With white-knuckle energy, the boys delivered a tidal wave of organized chaos. To date, the video of their performance has earned them a view count just shy of two million. Wilbur himself is flabbergasted at the fact that about a quarter of the size of New York City’s population had seen the video, “Tiny Desk exposed us to almost two million people, which is kind of mind-blowing to me. I can’t even imagine that many people.” 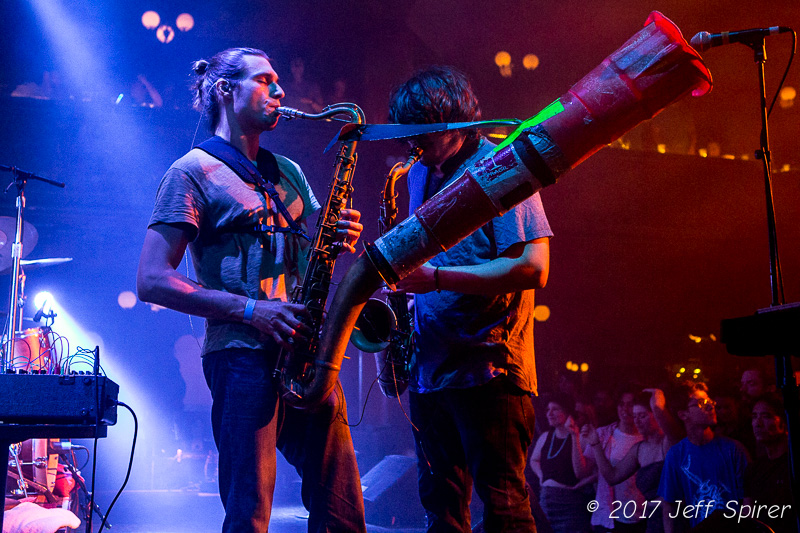 At San Francisco’s Great American Music Hall, the number of people who saw the band was much lower, but Moon Hooch nevertheless gave it all they had for us. Wenzl McGowen, co-saxophonist also brought his iconic traffic cone he stuffs in his instrument. 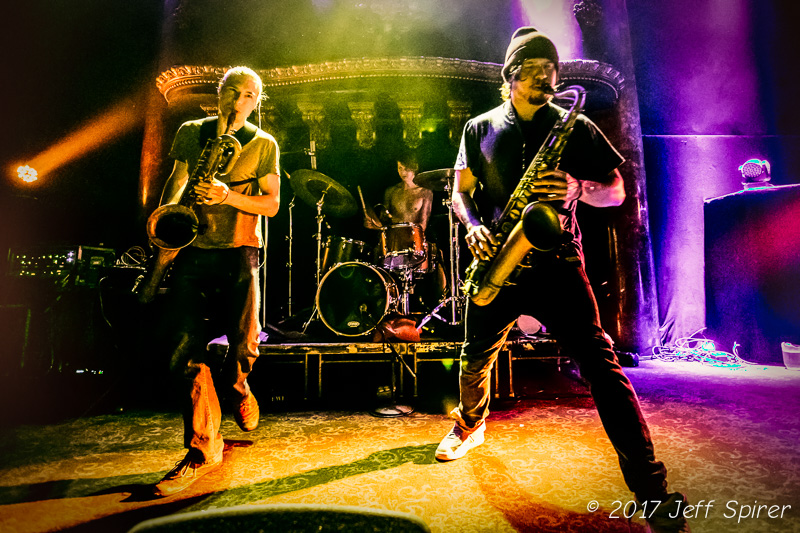 I did not keep count, but the band might have blasted through 20 or more songs non-stop. Sure, at times, one of the members would stop during a bridge when the song demanded one, however, the music seemed like it would never end. The show started off with songs in line with what is heard on Moon Hooch and This Is Cave Music, their debut and sophomore albums. Full of speed psycho jazz, the set wasted no time. The people of the Great American Music Hall were dancing and head banging. 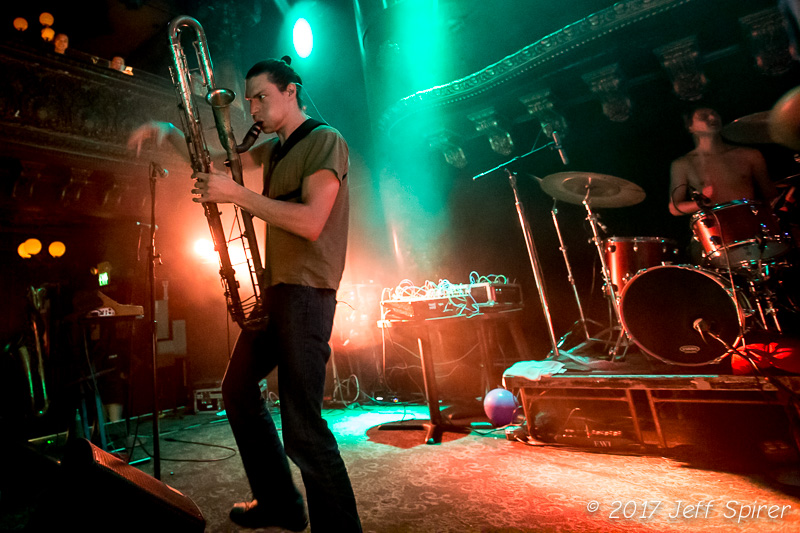 As their set expanded to even stranger territory, Moon Hooch incorporated dance music by seeping electronics into the mix. About halfway in, the set evolved from a prehistoric cave prance to a 23rd century rave party. At one point, there was Wilbur rapping, and drummer James Muschler made tablas appear out of thin air. It was all done without a setlist, even. When inquiring about it, McGowen told me the band played the set without one. Incredible. 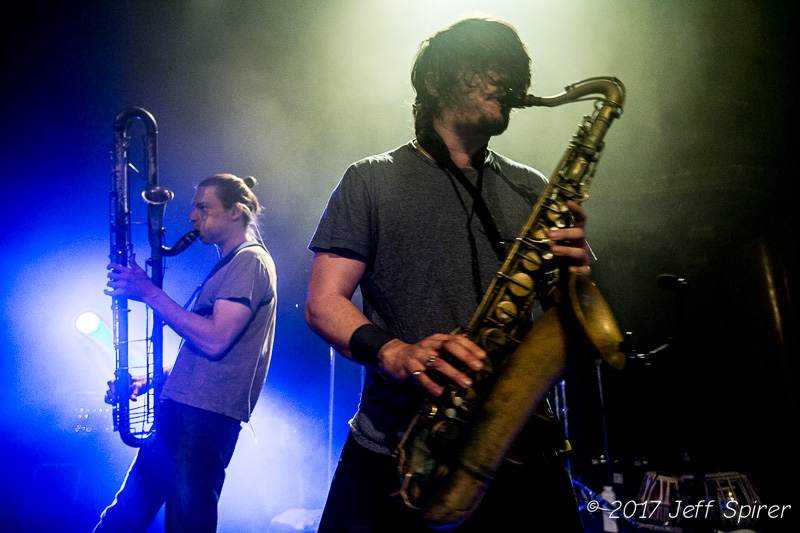 My favorite moment was when the crowd erupted right as “Tubes” and “Number 9” appeared. Both songs have a noticeable bounce to them, like a revved up polka dance. Everyone was absolutely sweating by the end of the night. 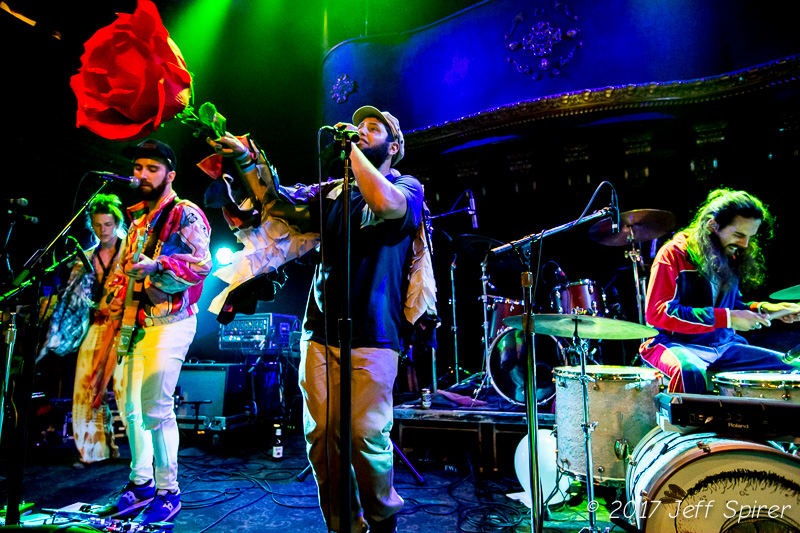 The night’s opener was Joe Hertler & The Rainbow Seekers. Featuring their own saxophonist, the group filled the entire stage with several guitarists, a singer, and a keyboard player. They blended a mix of 70s AM pop and funk music. They covered a wonderful version a Thundercat’s “Oh Sheit it’s X” that fired up the crowd on the dance floor.

For more information about Moon Hooch, check out their website.

Find out more about Joe Hertler & The Rainbow Seekers here.