Upright bassist Miles Mosley and his backing band West Coast Get Down came to The Rickshaw Stop on a Thursday night to deliver a thunderous set filled with dazzling displays of musical virtuosity and slick grooves. 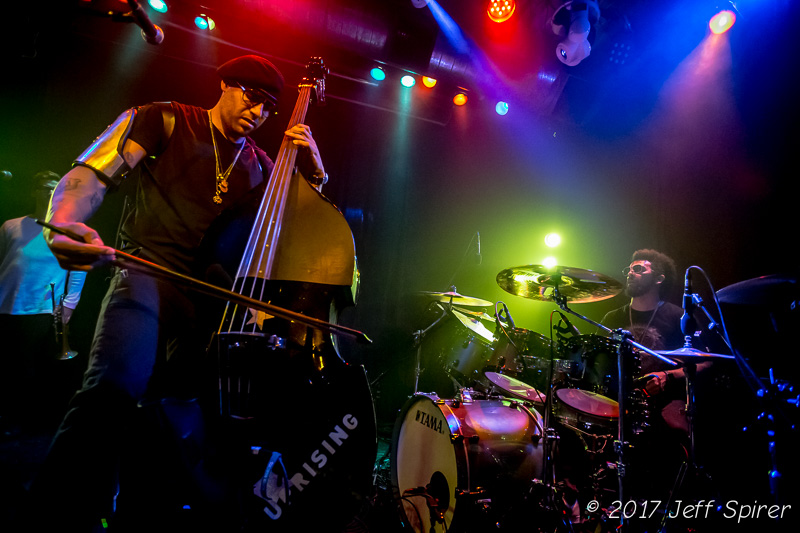 Mosley was the focal point of the show with his impressive bass chops and his powerful vocals, performing a mix of jazz, funk, hip-hop, and rock. What makes Mosley unique is his willingness to expand the upright bass beyond it’s normal range, incorporating a dizzying array of effects and alternate playing techniques. This was evident from the opening song “Young Lion,” which was the first taste of Mosley’s impressive skills as a soloist: breezing through a snappy bass solo that featured liberal use of bone crunching distortion and a wah pedal. 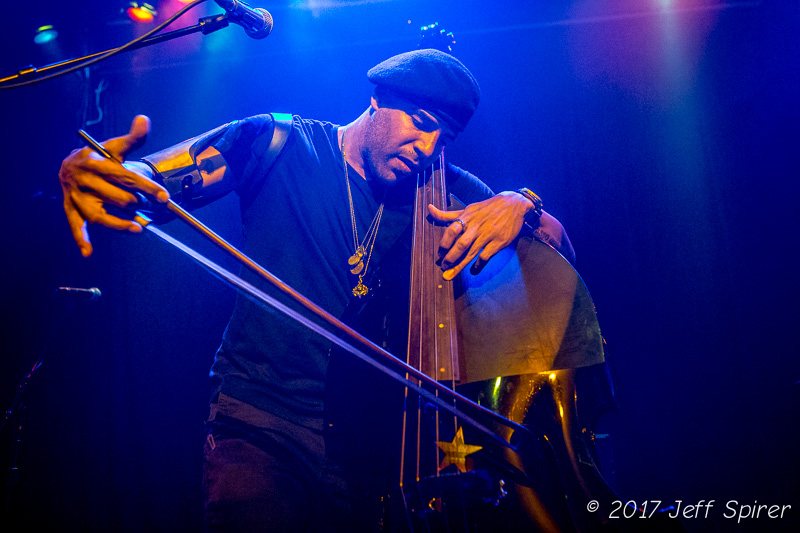 His vocals also stood out throughout the night, with his rich and sonorous voice providing the perfect complement to the upbeat music. This was music made for the live stage, with plenty of driving grooves, slinky break-downs and spontaneous improvisation. Around the half-way point in the set, Mosley stripped the band down to a duo featuring himself and drummer Tony Austin to play a few songs from their project BFI. Despite the stripped-down nature of these songs they still sparkled with energy, as Austin and Mosley locked into a deep percussive groove on the slamming “Get Down Moses.” 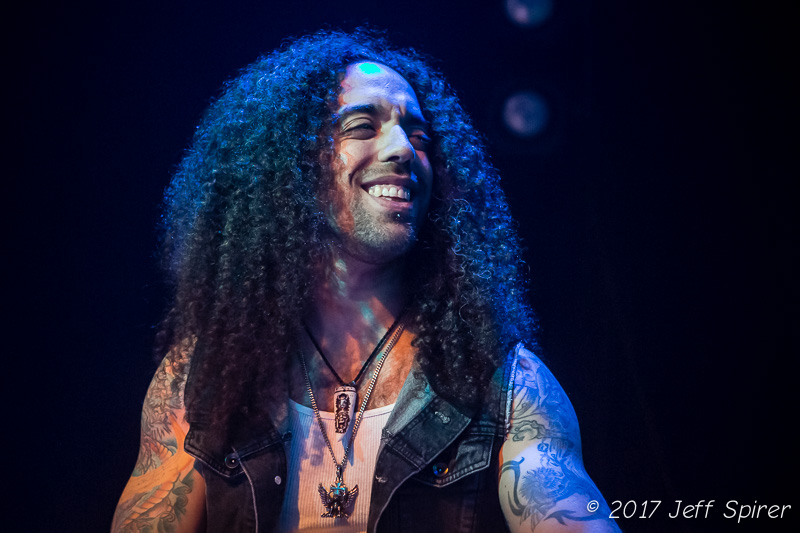 The most impressive musical performance of the night came during the blistering “Planetary Prince” from keyboardist Cameron Graves’ most recent solo release. The piece began with a virtuosic keyboard solo from Graves before opening into a fierce modal jazz progression. Trumpet player Philip Dizack was on fire during this section, dishing out plenty of attention-grabbing lead playing. The piece concluded with some more poetic solo work from Mosley before finishing. 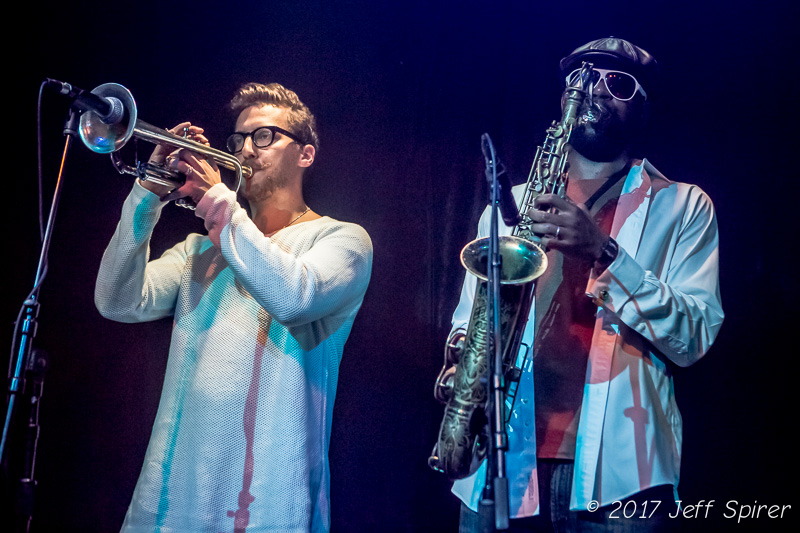 A few songs later Mosley unveiled a particularly powerful rendition of the track “L.A. Won’t Bring You Down.” Before going into the song, he related how discouraged aspiring artists would get upon their arrival in Los Angeles and that he wrote the piece to encourage those people to keep up a positive mental attitude. The piece was a major musical departure as it began with a somber yet uplifting bass progression from Mosley, invoking a powerful symphonic rock feel (due to Mosley’s use of a bow) to complement a powerful set of vocal lines. Eventually the song broke into a danceable slice of funk punctuated by saxophonist Howard Wiley’s fluid lead lines, bringing a cathartic end to an already epic song. 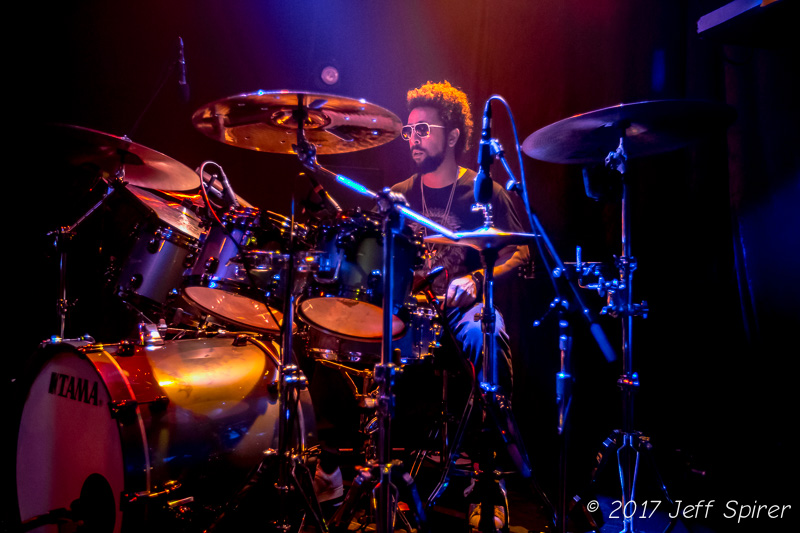 The band closed out the evening with the hard charging soul of “Abraham,” which featured an impassioned set of vocals from Mosley, demonstrating his impressive range as a vocalist. It was a captivating night of music which showed that Mosley and his band are one of the most electrifying groups in modern music today, worthy of serious attention and praise. 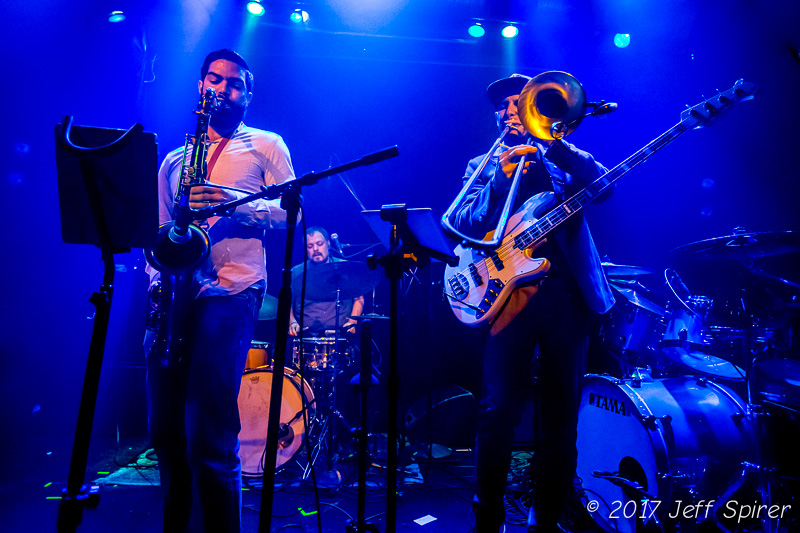 The Jazz Mafia Mobtet opened the night with a series of spectacular horn driven songs. Featuring plenty of rhymically complex drum patters and some elastic sounding keyboard bass, the quartet specialized in a searing blend of laid back jazz with upbeat bebop inspired playing along with some electronic influence. At time, especially early in the set, the quartet recalled Bitches’ Brew era Miles Davis.

Here’s more photos by Jeff Spirer of Miles Mosley and the West Coast Get Down and the Jazz Mafia Mobtet:

Miles Mosley and the West Coast Get Down:

Setlist : Open Sesame/Young Lion | Reap a Soul | More than this | Shadow of a Doubt/2001 | Heartbreaking | HRP | Get Down Moses | Planetary Prince | Tuning out | L.A Won’t Bring You Down | Abraham

For more information on Miles Mosley, check out his website.

Find out more about the Jazz Mafia Mobtet here.