Northern California native Mike Patton is, perhaps, one of the best examples of a living embodiment of the many arts and facets of life that make up a place as complex as the Bay Area. His pedigree, which spans over thirty years, ranges far and wide; from symphonic Italian pop, to gnashings of vocal snarls and otherworldly sounds made by the human mouth, and even to densely-layered alt-metal within the work of Faith No More. It made sense, therefore, that one weekend of shows at The Chapel wouldn’t be enough for Patton; he had gotten the funkier, hip-hop-driven party tunes out of the way, and thus a night of improvisation and cacophonic noise was in store for those who packed themselves in on a Sunday night in the Mission. 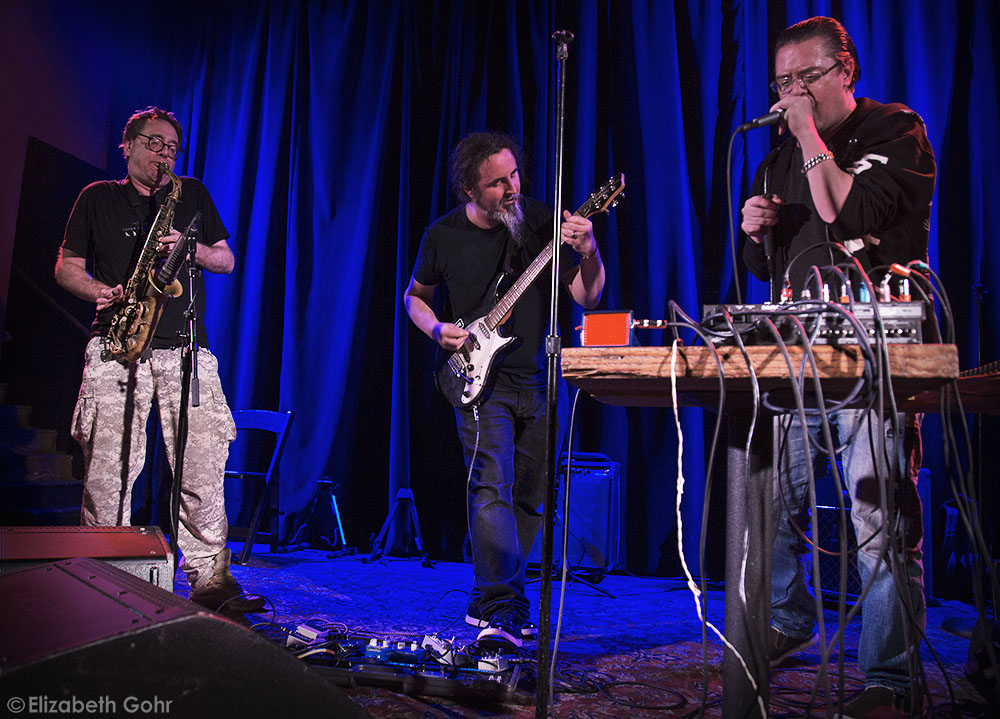 A curated, multi-hour visit to San Francisco’s experimental music scene wouldn’t be complete without a few of his friends in tow, of course, and Trey Spruance–Patton’s cohort from Mr. Bungle, Weird Little Boy, and one of the later Faith No More records–was the man for the job. Taking up his bass, Spruance blasted his way through an intriguing set of musique concrète, an experiment called NT Fan. He strummed furiously over some truly bizarre noise pastiches that played off of a laptop onstage, and most of the set was short, sharp numbers that mostly danced between grindcore and straight-up noise. There were also a few pieces that saw Spruance manipulating a pad to generate otherworldly sounds and samples, building up a sonic collage that was as manic as it was complex. Perhaps the most eerie segment of Spruance’s set was a gentle, funeral-paced bass solo, whose gentle melody and delicate tempo made it almost more unsettling than the demonic-sounding minor chords and thundering drums that accompanied most of his “songs”. 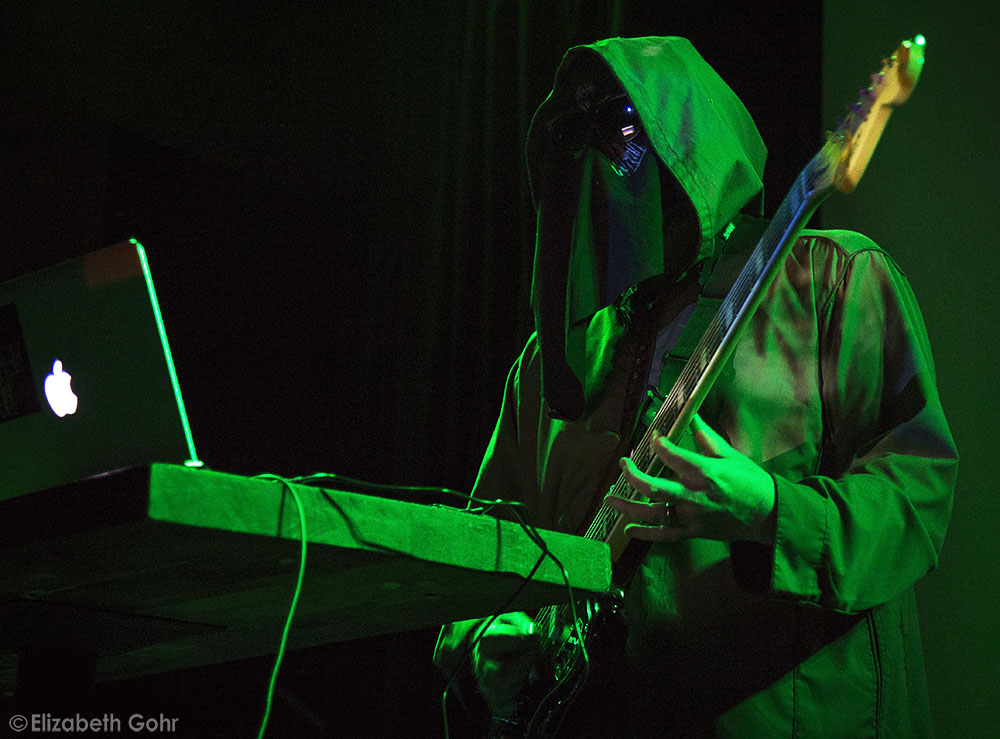 Though Spruance chose to embody dramatic visuals for his set – he wore the robe and mask he often dons as the frontman of Secret Chiefs 3, and had a set of strange slides mashing tech CEOs and serial killers together in a grisly montage – Patton took the stage in a T-shirt, hoodie and jeans, no doubt preferring to pair comfort with the hellish walls of sound he was ready to unleash. Avante-garde musician John Zorn, another longtime friend and collaborator with Patton, had flown in from New York to join him for the set. Though “singer” and “saxophonist” were words that could be used to describe Patton and Zorn, the hour of aural mayhem that followed was so far down the realm of experimentation and improvisation that such terms would seem to be wildly inappropriate descriptors. 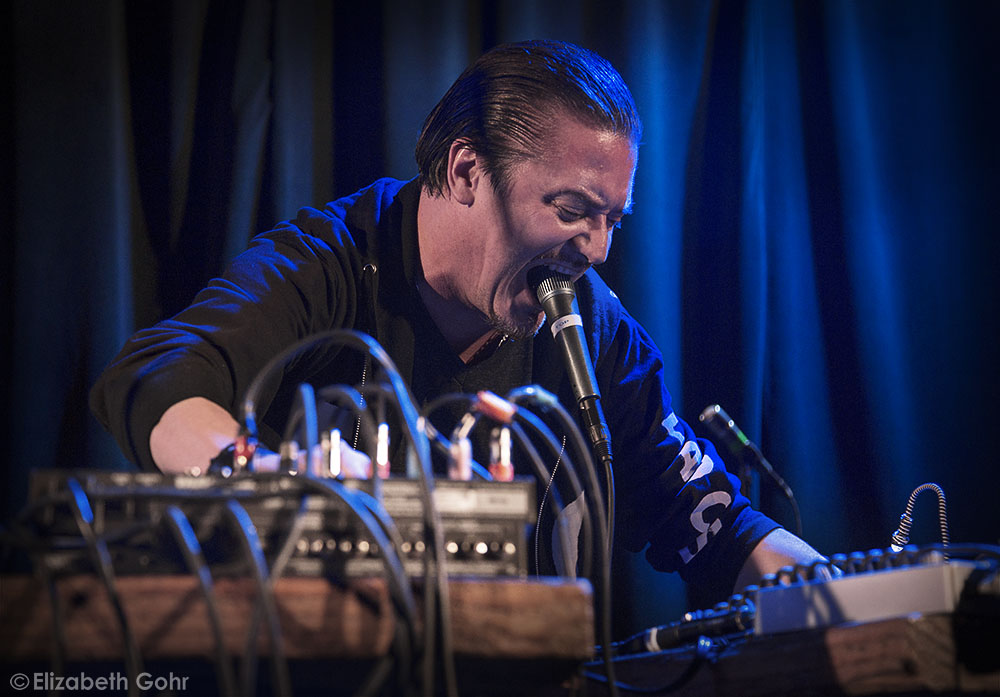 Each piece in the set saw Patton armed with one, two, or even three microphones (with the third clenched tightly in his teeth), as he proceeded to deliver all manner of shrieks, snarls, bellows, scat-shouts, and a hundred other issuances that were somehow possible to be generated by vocal chords alone. It was difficult to tell whether Patton, or Zorn – who provided accompaniment with his own miasma of squeaks, wails, and bashee-like blarings of his alto sax – was leading the rhythm of each piece, or, in some places, which sounds were generated by which man. The tempos within any given number flew back and forth; one moment, a creaking, lumbering drone, the next a feverish staccato, and most would come to a halt as jarring as the notes that had conjured them into existence. 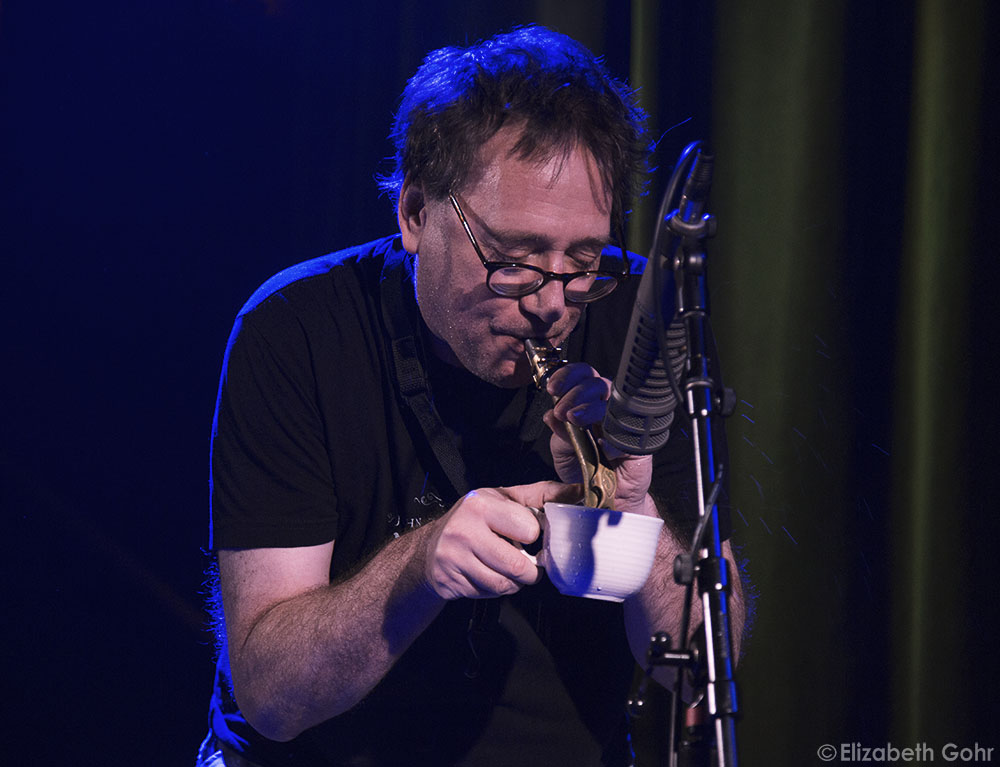 Although the set was a solid hour of sax-and-vox chaos (with one brief encore), a few surprises were thrown into the mix. A pile of samplers, miniature cymbals, and a light-powered theremin made up the rest of Patton’s setup, offering up their own new universes of sound as he brought them to life for a few minutes or more. Zorn, not content simply playing his sax by itself, detached the mouthpiece from the instrument, plunged the opposite end into a mug full of water, and proceeded to violently gargle his way through one of the songs. Even Spruance made a repeat appearance – this time without his robe or mask – and provided the linchpin rhythm and low end to the howling tenor screams of Zorn and Patton. The most startling moment, however, was during one of the calmer drone songs – a random fan suddenly marched onstage and bellowed into the mic, temporarily breaking the spell of the piece, before the bemused duo before she was hastened offstage by security. 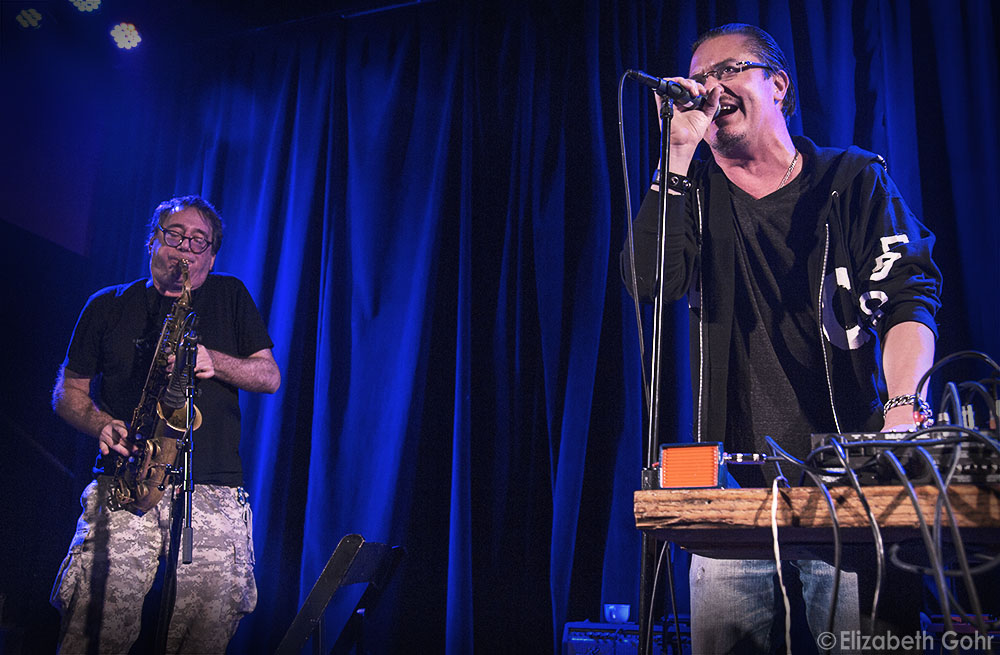 Fans of more “normal” music, take heed – this was a concert that sought to ignore all common aspects of musical performance, and instead present a night on the bleeding edge of sonic experimentation. The only effort spent on visuals was by Spruance for his opening set; the headlining act shined bright, solid lights upon themselves, which remained solid and stable for the full duration, and though Patton stalked back and forth across the stage with the precision of a graceful predator, bodily movement was also not a focus for this show. For those looking to end their week with an evening of melodic, friendly tunes, Patton and Zorn’s performance was anything but; it was deeply steeped in ferocity, atonality, maniacal passion, and its own depraved sense of what music–or, perhaps, sound–could be.

Here’s a slideshow with more photos by Elizabeth Gohr: