As one walked into the sold-out Golden One Center in Sacramento on Friday night, there was a palpable sense of excitement, a certain electricity emanating from the crowd as comedian Jim Breuer was working the crowd and getting them pumped up with classic metal songs. Northern California fans had eagerly awaited this night, one in which the mighty Metallica would come through on a closing leg of their massive Worldwired Tour. 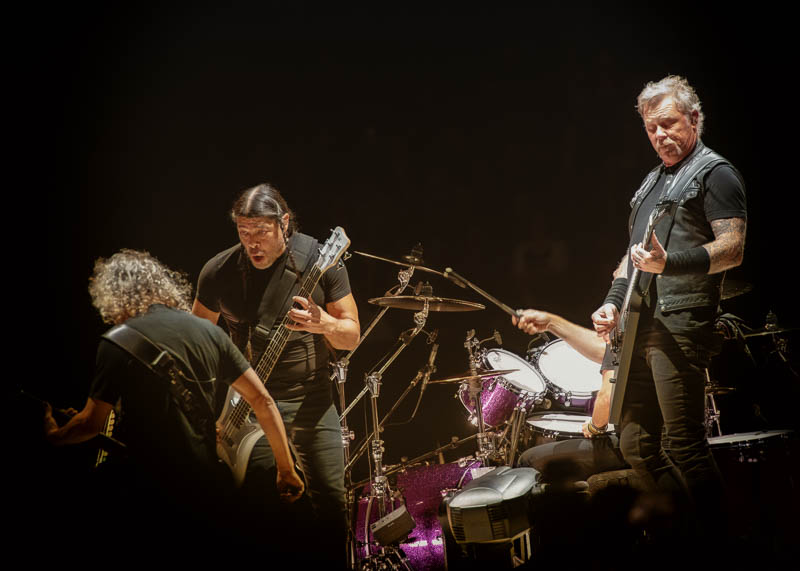 Eventually, Breuer came on stage to proclaim that it was time and he took his exit as the PA system played a few more songs before the lights dimmed and a clip from The Good, the Bad, and the Ugly played on the sophisticated video rig above the stage. As the climactic scene in the graveyard played out, a familiar tune, “The Ecstasy of Gold,” began to play. The song has been Metallica’s intro track on almost every single concert of the past 26 years, and knowing this, the sold-out crowd began to roar in excitement. 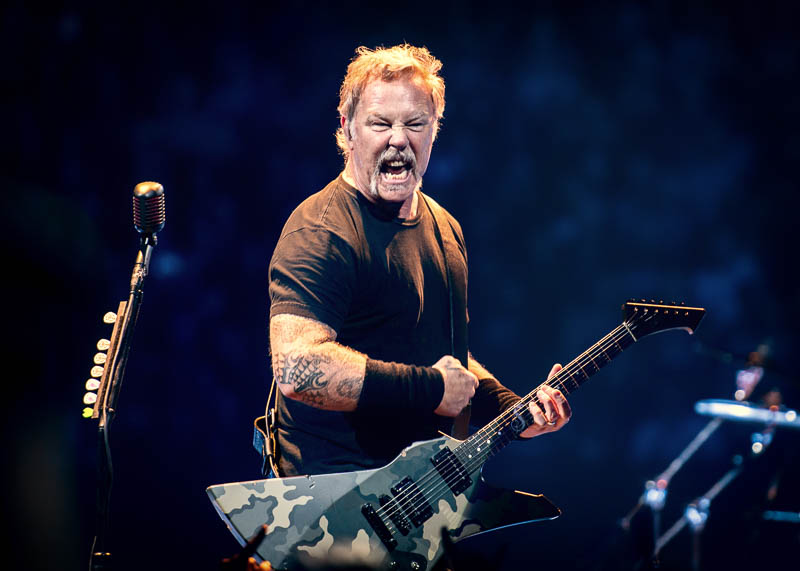 Suddenly, the intro to “Hardwired” began to play as the band took to the stage and tore straight into the blistering piece of thrash from their latest release, Hardwired to Self-Destruct. As has been the case the whole tour, Metallica’s stage is set in the middle of the area, or “in the round,” with a giant lighting and video rig above the band. In what seemed like a matter of seconds, the band had steamrolled through the song and went right into another new song, “Atlas Rise.” Between the crushing chugs of guitarists James Hetfield and Kirk Hammett, the track really cranked the intensity of the entire arena. 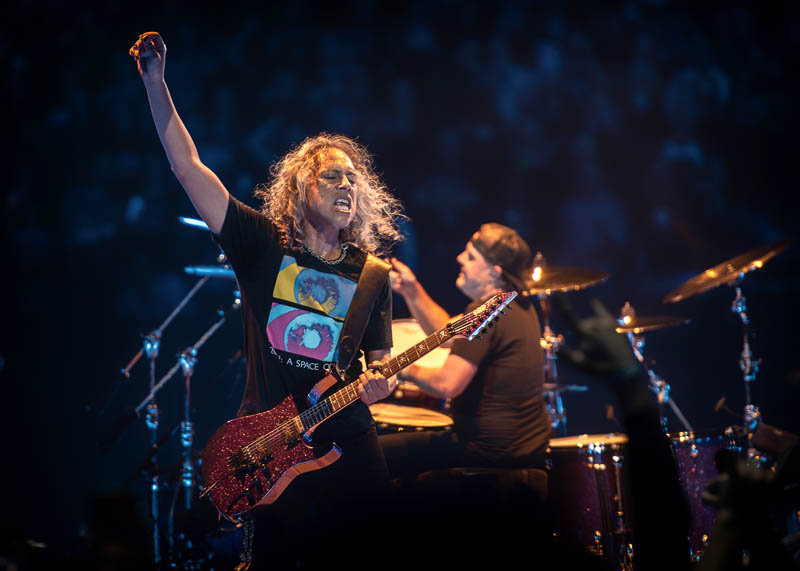 After a brief pause, Hetfield took to the mic to talk a bit with the audience, saying that the band planned on playing some new songs, some songs from their middle period, and, “if you’re nice, maybe some old songs too,” before he began playing the iconic opening guitar riff to “Seek & Destroy,” one of the most memorable songs from their debut album, Kill ‘em All. The song had the whole crowd singing along to its anthemic chorus before a quick drum fill from Lars Ulrich signaled a change into the brisk thrash of the solo section, where Hammett and Hetfield traded off rapid-fire solos. 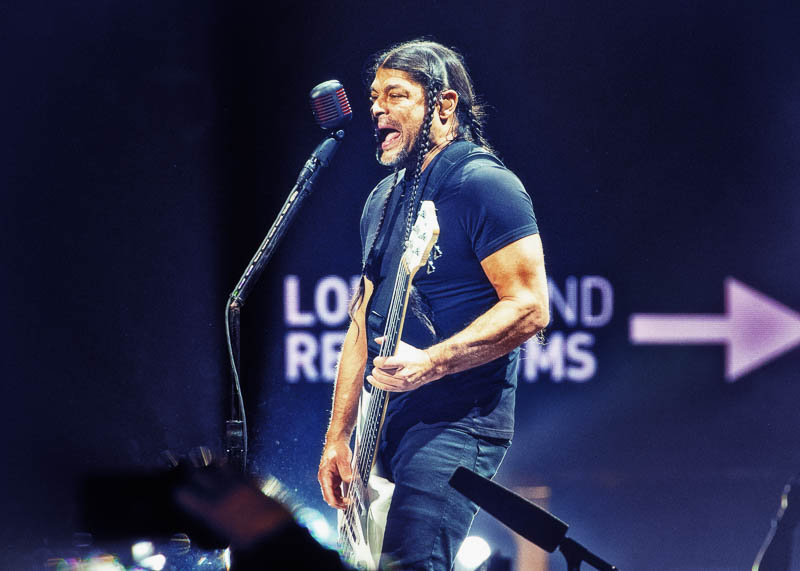 What makes a Metallica show so captivating these days is the fact that the band changes their setlist from night to night based on the Spotify listening habits of the particular city, meaning you could wind up seeing plenty of deep cuts from the band’s legendary back catalog, and that’s exactly what happened on this night as the next song up was the stomping groove of “Shortest Straw.” 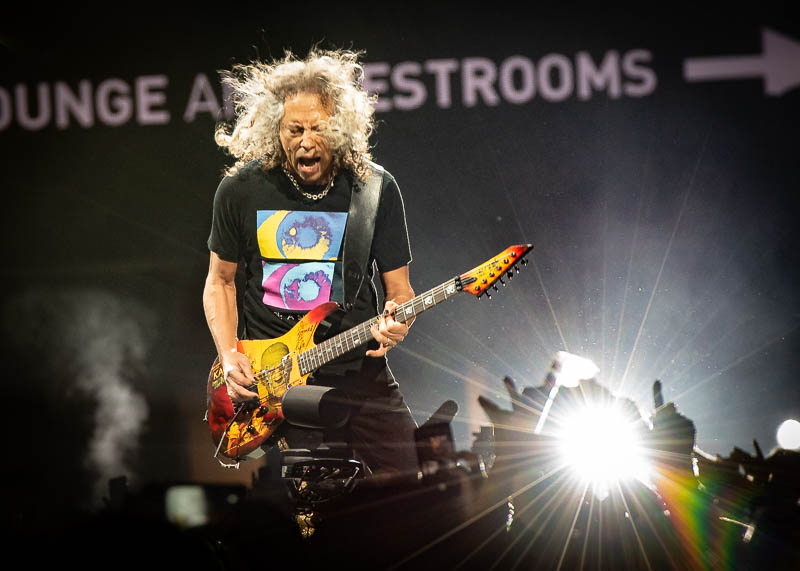 Metallica was clearly blasting at full power as they effortlessly moved through the song’s challenging instrumental sections and Hammett nailed a dexterous guitar solo. After this, the band slowed it down with the classic ballad “The Unforgiven,” which featured yet another memorable solo from Hammett. Again, the sophisticated lighting and video rig made each song have its own unique look and feel, helping to amplify the music. 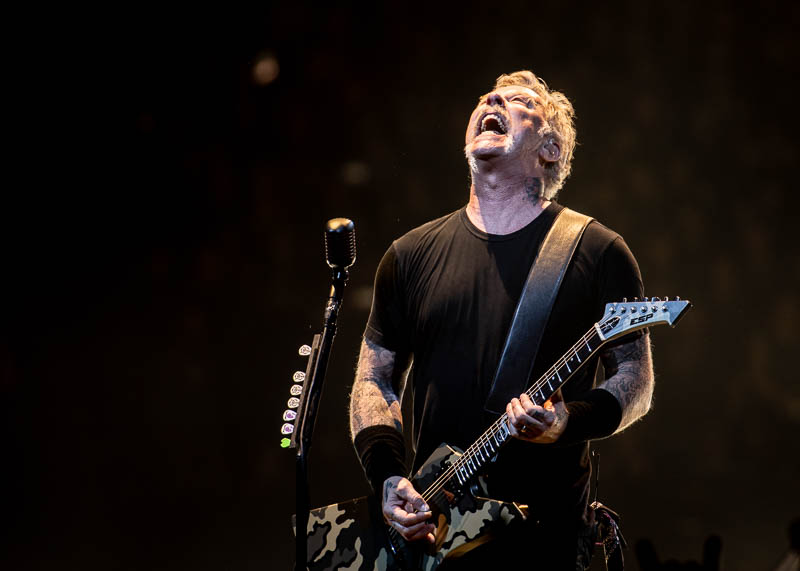 Playing in the round also allowed Metallica to move all around the stage and interact with every part of the audience. The stage also featured plenty of hidden props that came out from below, such as extra drums for an extended band drum solo during “Now That We’re Dead” and drones for “Moth into Flame.” 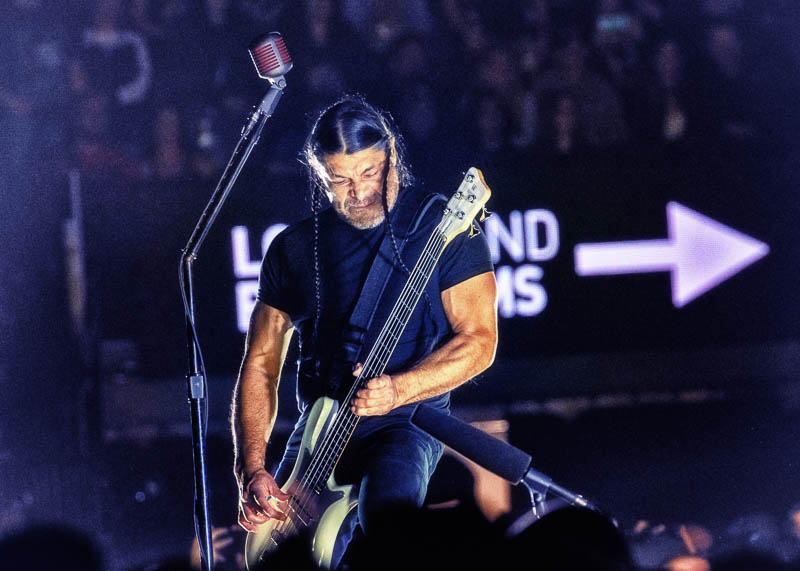 Another high point came in a stunning rendition of the moody ballad “Welcome Home (Sanitarium),” a song that shifted from mellow, clean guitars to rampaging thrash metal to a sophisticated twin-guitar harmony, all in a matter of seconds. After that, the band let loose a little bit as bassist Rob Trujillo took to the mic and announced that he and Hammett were going to jam on a song from a local band, which happened in the form of a cover of the Deftones song “Elite,” with Trujillo doing a solid job of singing like Deftones frontman Chino Moreno. Eventually, Trujillo began to perform an unaccompanied bass solo that turned into a version of “Anesthesia (Pulling Teeth)” from the band’s first album. And after, Hetfield and Ulrich returned to burn through the caustic thrash of “Whiplash,” which seemed to really get the crowd going. 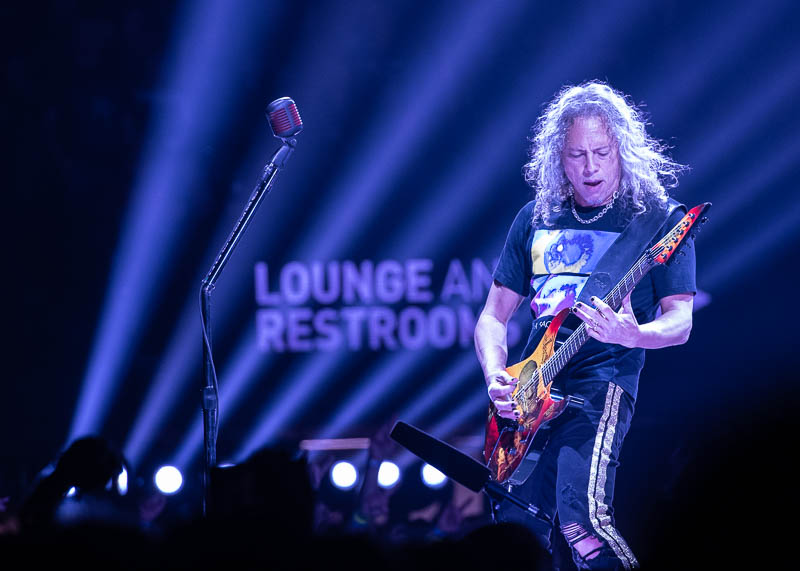 However, in true Metallica fashion, they were saving the best stuff for later in the set, as the following song was the all-time classic “Creeping Death.” A long form biblical epic based on the story of the Israelites escaping from Egypt, the piece featured plenty of stellar guitar playing and memorable hooks, such as the mid-song breakdown which had the entire arena chanting along with the band. 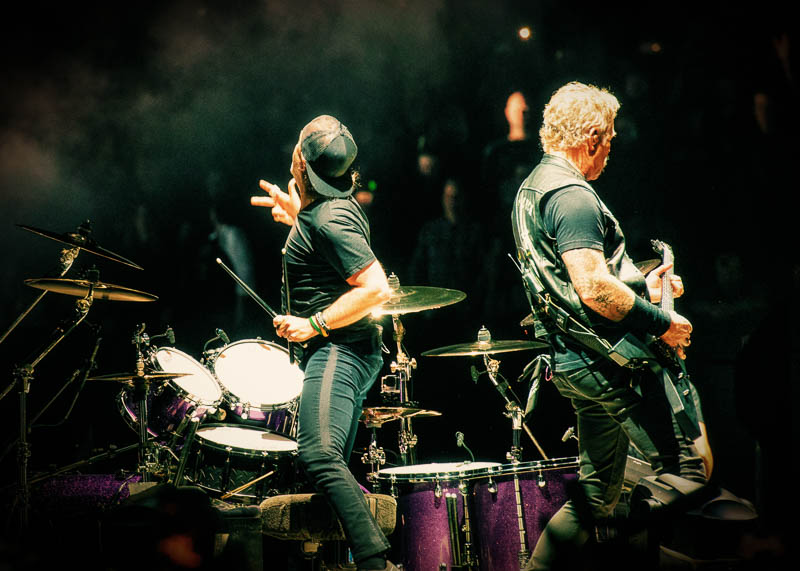 A few songs later, Metallica closed out the main portion of the show with scorching renditions of “One” and “Master of Puppets,” two of the band’s most memorable compositions. Fans were in awe as Metallica effortlessly moved around the stage playing through both songs’ complicated musical changes, “One” ending with plenty of audial and visual fury with the song’s syncopated riffs matching perfectly with pulsating strobe lights.

The biggest surprise of the night was still to come. 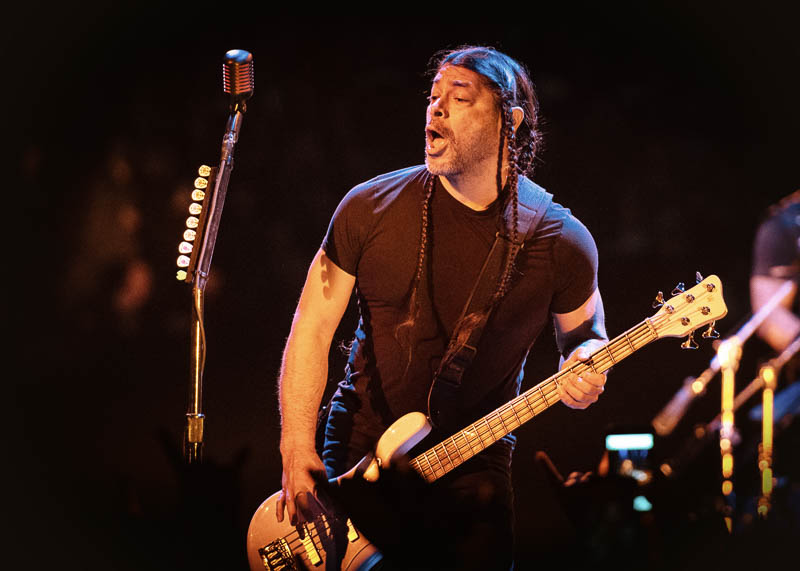 As the band left the stage for a few moments to gather their collective breaths, the intro to “Battery” began playing over the PA, indicating that the seldom-played track was up next. “Battery,” of course, is the lead track off Master of Puppets, generally regarded as the band’s best record. As the intro finished playing, Metallica jumped back on stage to tear through “Battery,” a furious slice of thrash metal that is based around a rhythmically challenging guitar riff and plenty of hyper-speed drumming. As had been the case the whole night, Hetfield nailed the song’s powerful vocal line while Trujillo held everything together with a tight bassline. 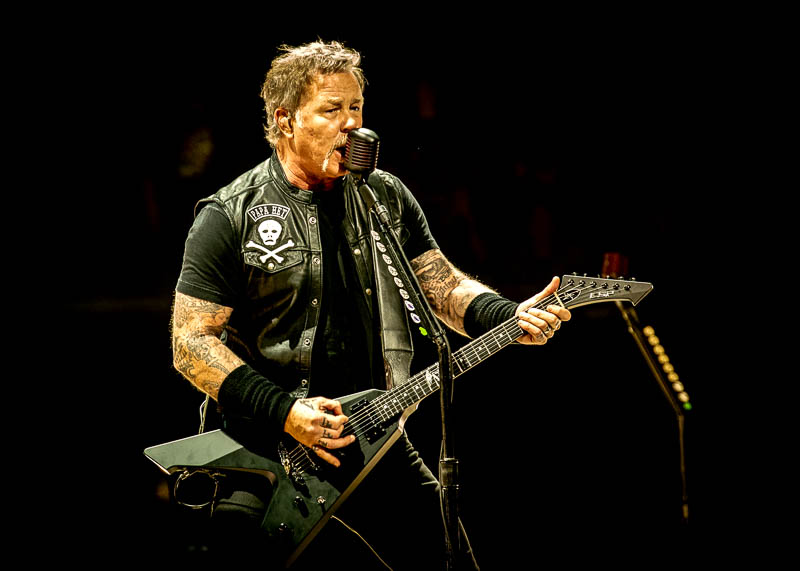 Metallica dialed things back a bit after that as they worked their way through the gentle ballad “Nothing Else Matters” before finishing the evening with “Enter Sandman.” Known far and wide across the entire world for its iconic opening riff, “Enter Sandman” featured an impressive fireworks display, circling Ulrich’s drum set with plenty of colorful explosions.

And just like that, the band’s two-hour set was over, having demolished the crowd and giving fans yet another memorable performance on what has already been one of the band’s best tours. At this stage in the game, it would be easy for a band like Metallica to simply pack it in and take it easy, yet they seem to be intent on pushing the boundaries as to what they can do live. With more sophisticated stagecraft and lighting, many of these songs were taken to another level, shocking the audience into submission.

Metallica still remains one of the world’s greatest live acts, and for good reason: few bands have as much fun rocking the crowd. Friday night was proof again that after 37 years, the band has no intention of slowing down anytime soon.