Legendary guitarist Marty Friedman, known primarily for his work as the lead guitarist of Megadeth in the 90s, brought his brand of high energy guitar music to the Oakland Metro on Tuesday night, delivering an inspired performance to the delight of everyone in the audience. Friedman has dabbled in many different styles of music during his long solo career and that was reflected in the setlist, which featured a smattering of technically challenging complex music drawn from a good portion of his solo albums. The majority of the songs were of the hard charging metal variety, which allowed for Freidman to demonstrate not only his impeccable skills at soloing but also his tight and powerful rhythm playing. 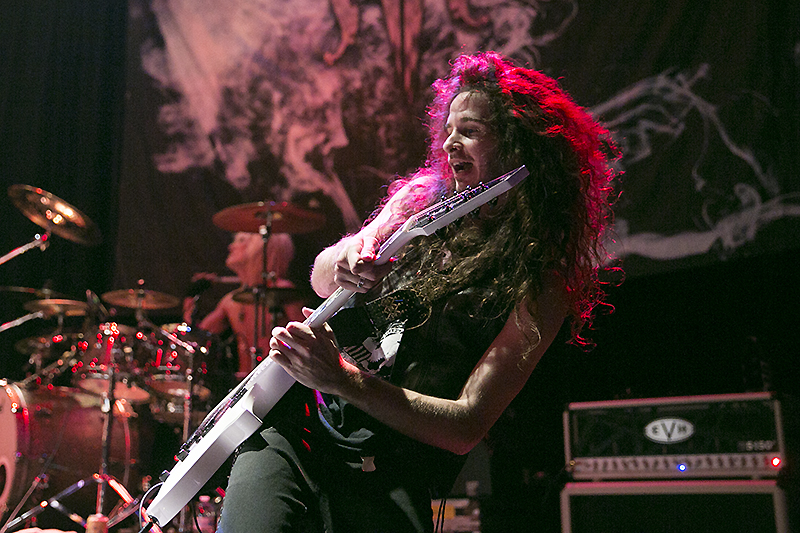 The first five songs of the set were each ferocious, blending blistering heavy metal riffing from Friedman and second guitarist Jordan Ziff to go along with the exotic lead playing Friedman is known for. One that stood out in particular was the fierce “Elixir.” The song starts off with a frantic hyper-speed guitar part that manages to overwhelm and overpower the listener with its combination of speed and jagged dissonance before seamlessly flowing into a more melodic and upbeat section with Japanese pop overtones. Seeing as Freidman has lived in Japan for the past fifteen years, this influence is not at all surprising. The overall effect produced is a combination of amusement, bemusement, and awe. 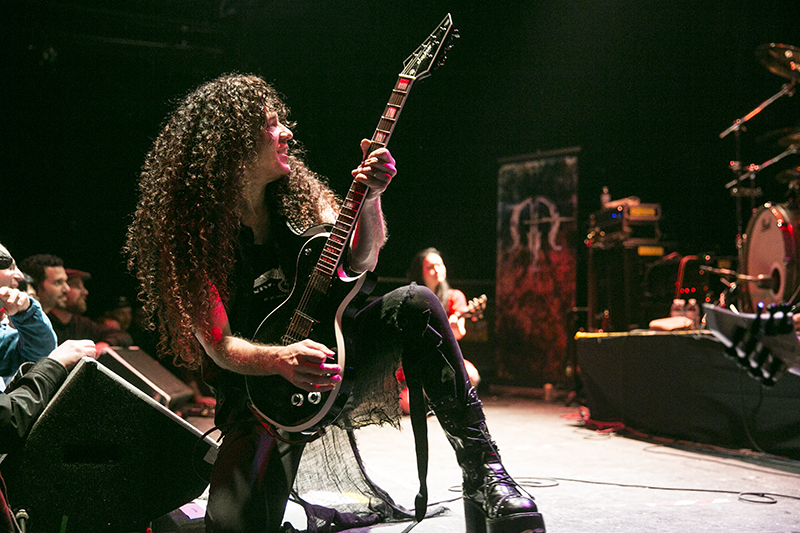 However Friedman is also known for his capabilities when it comes to playing more expressive and melodic pieces, which was showcased during the mid-set ballad, “Devil Take Tomorrow.” The song begins with a gentle clean guitar piece, gently weaving between both chord-based passages and melodic leads. Eventually the track moves into a stately yet upbeat section as Friedman goes to work, showcasing a more subdued and almost bluesy style of playing. Halfway through, the song goes full tilt into an anthemic and catchy lead guitar melody as Friedman again churns out some impossibly tricky guitar passages before gradually bringing down the tempo and returning to the original clean guitar intro as the song finishes. 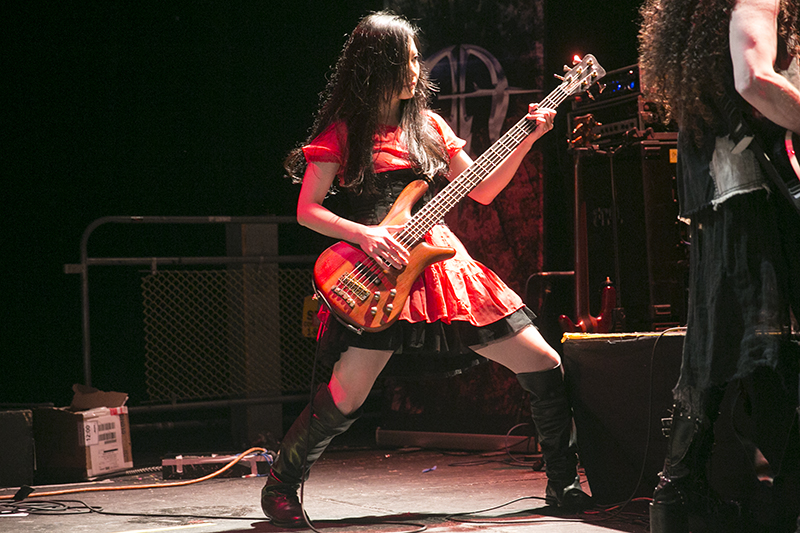 A few songs later bassist Kiyoshi Manii got a chance to shine as she performed a stunning unaccompanied bass solo, effortlessly blending high speed runs with funky slap before going into an impromptu cover of the Iron Maiden standard, “The Trooper,” while being backed by the rest of the band. Next up, the band returned to their guitar-based attack by ripping through a section of the Friedman classic “Forbidden City” before cutting into the solo section of the Megadeth song “Tornado of Souls.” The passage features what is perhaps Friedman’s most famous guitar solo, an epic demonstration of all of his strengths as a player and one that the rabid audience really appreciated. The solo itself begins with a few relatively simple guitar figures before gradually picking up speed as Friedman incorporates all manner of guitar heroics yet never loses the tonal and emotional center of the song. 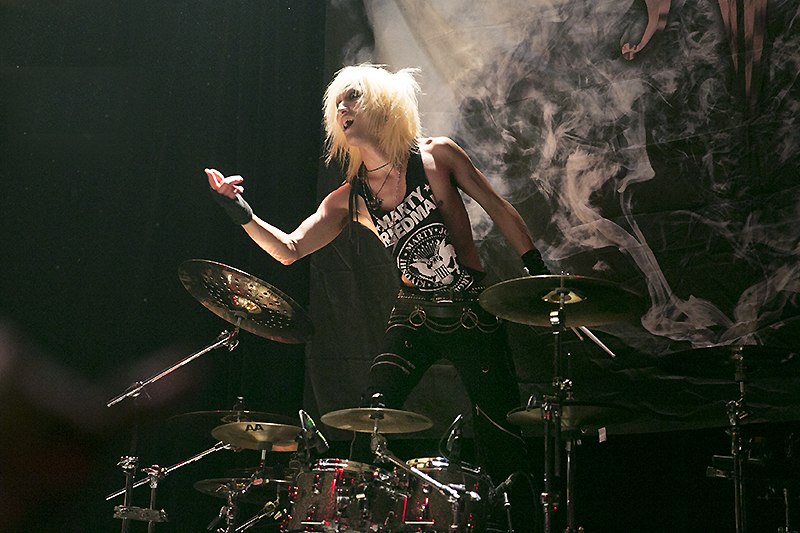 Following this, it was Ziff’s turn to show off his own impressive set of skills during an unaccompanied guitar solo, demonstrating all of the lightning-fingered dexterity required when backing up a legend. After a brief period of this, he (along with the rest of the band) launched into an instrumental version of the Queen classic “We Are the Champions,” wherein Ziff managed to nail the main vocal line on his guitar. 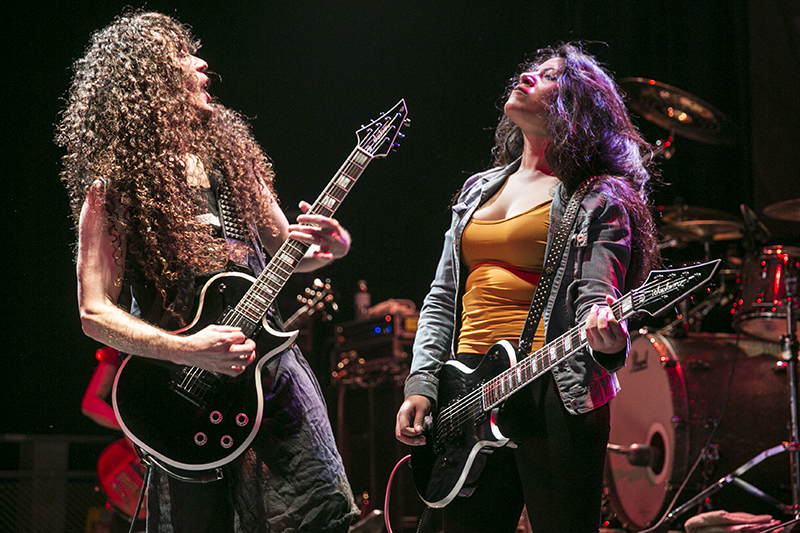 A couple of songs later the band closed out the main portion of their set with what is one of the most widely known Friedman tracks, “Thunder March,” off his debut solo release. The track is driven by a strong melody line that Friedman uses throughout, using it as a tonal basis for a myriad of musically dense guitar solos. A testament to his true skill as a player, the song never loses one ounce of meaning or relevance during these parts. 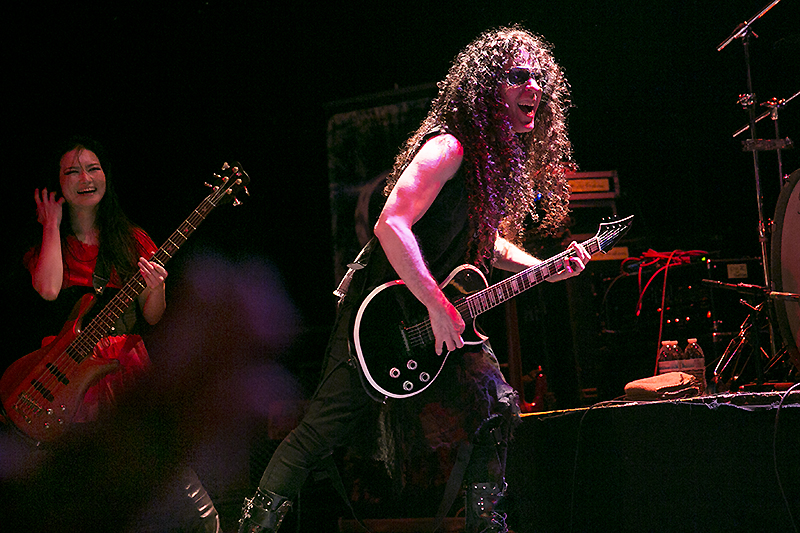 The band came on for a one-song encore, offering up a spirited rendition of the Japanese pop song “Kaeri Taku Natta Yo.” The track is anchored by a steady beat by drummer Chargeeeeee, who looked like he was having the time of his life bashing away on his kit during the song. Friedman was again in fine form on this track, doing a superb job of taking the main vocal melody and transposing it onto guitar. The song’s upbeat nature made it the perfect anthem to close out a fun filled night of music. Throughout the song (and throughout the night) it was obvious just how much Friedman and the rest of the band were enjoying themselves playing this music, and their spirited passion seemed to really rub off on the audience, which seemed overjoyed to be there witnessing this series of events. 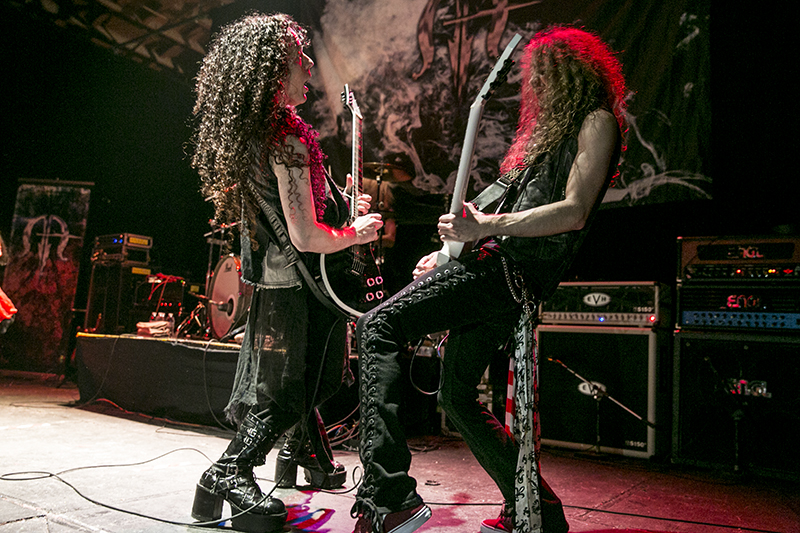 After a series of successful American concerts in 2015 in addition to his current run of shows, it would appear that Marty Friedman has reconnected with his fan-base stateside, which will hopefully make him more likely to keep coming back here.

For more information about Marty Friedman, see his website.