What happens when you combine one of the most legendary bands of all time with a tongue and cheek social commentary on the fast food industry? Why it’s Mac Sabbath of course! 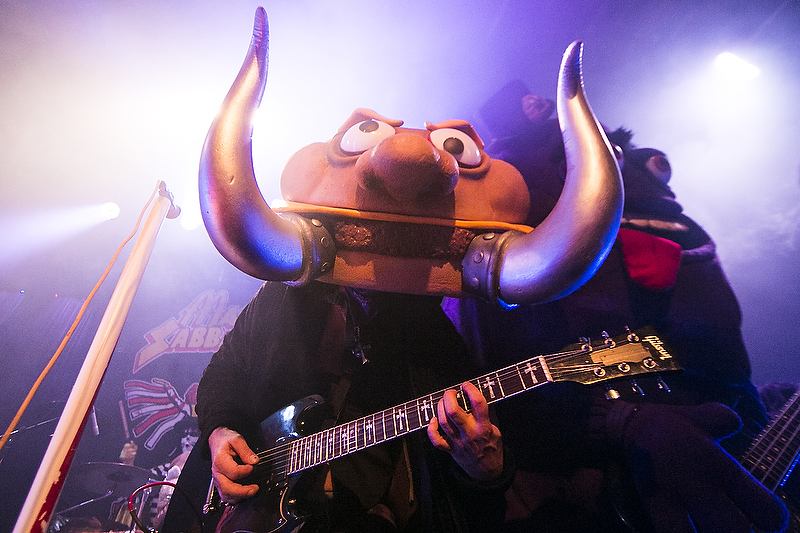 Inspired equally by Black Sabbath as they are by the campy, over the top cartoon-like characters of the world of fast food, the “players” of Mac Sabbath include frontman Ronald Osbourne, guitarist Slayer MacCheeze, bassist Grimalice (who Osbourne refers to as “I Can’t Believe it’s Not Butler”), and Catburgler (aka Peter Criss-Cut Fries) on drums. While their costumes may make it seem like everything is just one big schtick, the band can seriously play the music to back it all up. 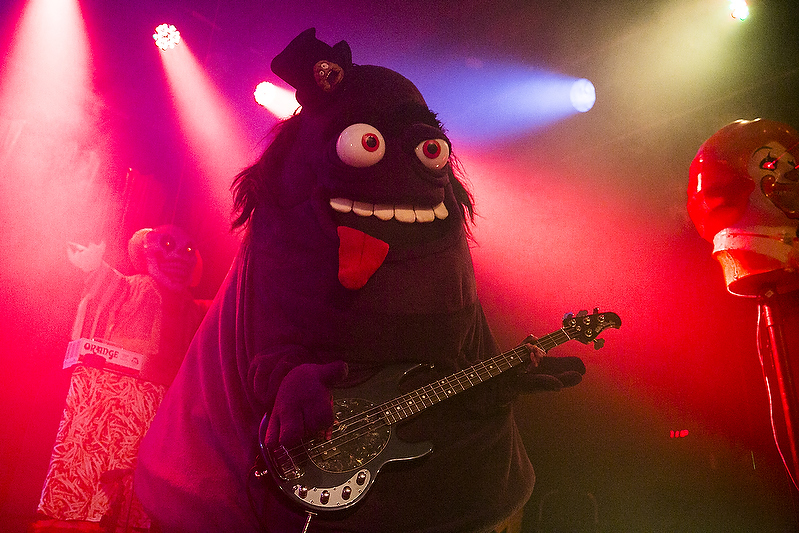 With the sirens of “War Pigs” blaring in the background, and the laser eyes of the decapitated clown heads on either side of the stage shot their beams across the venue, Mac Sabbath hit the stage with “More Ribs” and proceeded to deliver a riff-filled spectacle that was equally genius as it was ridiculous. 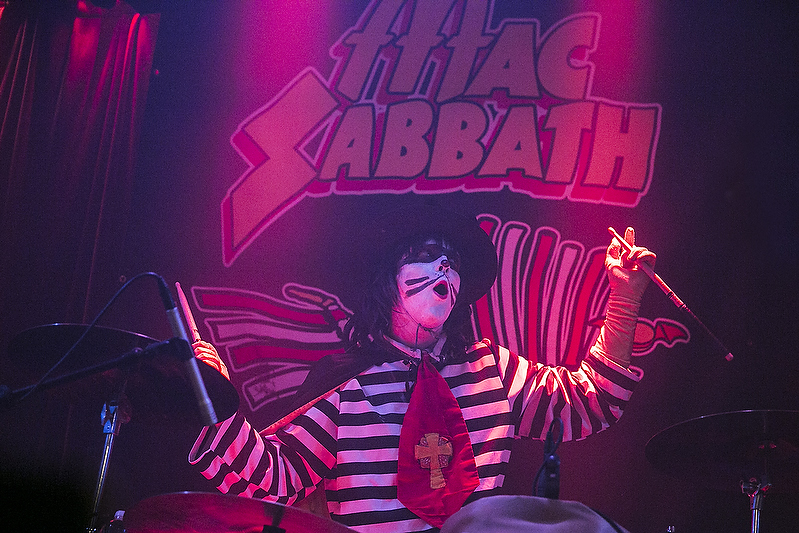 As “Sweet Leaf” became “Sweet Meat,” “Lord of this World” became “Lord of the Swirl,” and “Iron Man” became “Frying Pan,” Osbourne delivered a spot on Ozzy impersonation, complete with leapfrog like jumps, clapping while banging his head, and a terrible British accent. His puns were so awful they became funny, and more than once, every single person in the packed venue was smiling. And whether he was cooking up bat burgers on his grill or playing the guitar on his eight-foot long red and yellow straw, he had everyone along for the ride. 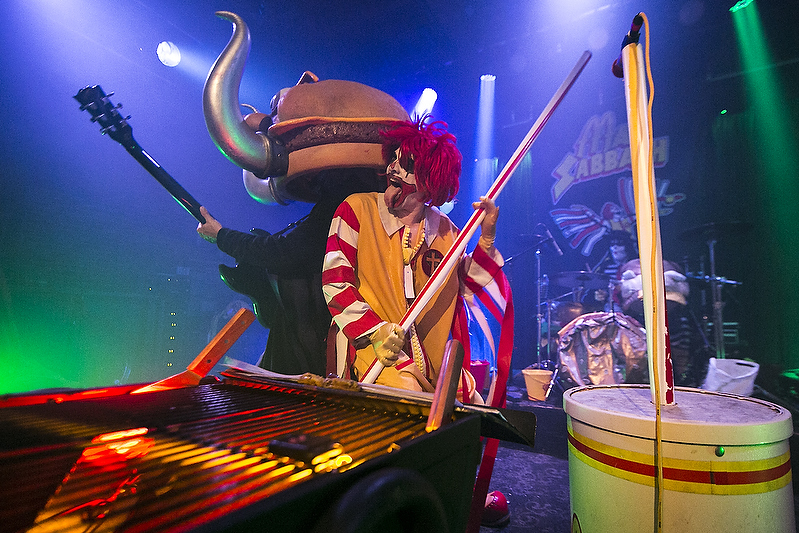 Although they might not have appeared to do as much as their vocalist due to their enormous costumes, MacCheeze and Grimalice were just as entertaining and covered just as much ground on stage as Ronnie, while Catburgler kept everything in check behind the kit. 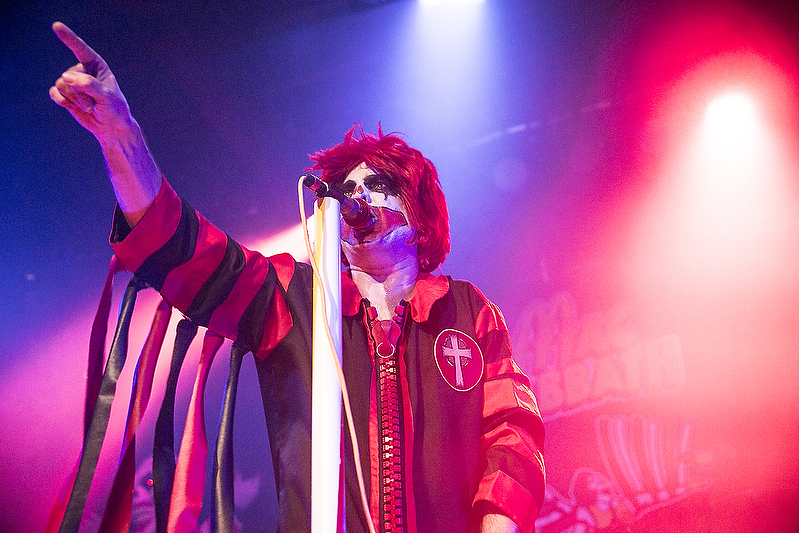 It was nothing short of a brilliant performance, and it was quite obvious that, while it may seem like it’s just a big joke, there is a lot of time, effort and energy put into a Mac Sabbath show, and there is much more behind those masked men. 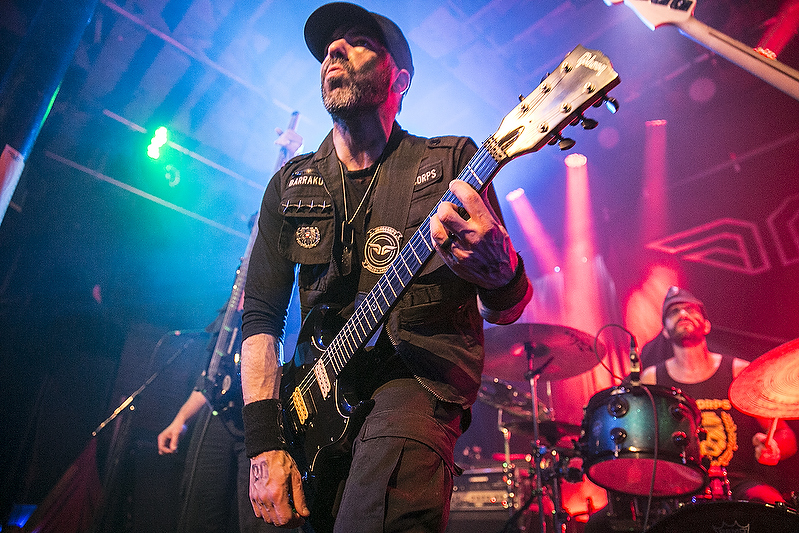 Opening the show this evening was the one and only Arnocorps, the long time Bay Area Arnold Schwarzenegger inspired band of action heroes who also put on a great set. Highlights included “Total Recall,” “You Lack Discipline,” and “I’m Ballsy,” which included them inviting audience members up onto the stage to flex their muscles and pose for the crowd. But that was all out done by guitarist Inzo Der Barrakuda and bassist Token Alder “surfing” across the crowd on guitar cases to the back of the venue, while lighting each others’ cigars. The band was the perfect choice to open the show, and hopefully we will get a full headlining set from them soon.

Check out Mac Sabbath on their web site.