The thing about Mac DeMarco is that his whole image is not a gimmick. If you picked up This Old Dog this year and looked up the artist himself, you might think otherwise. But the Canadian born singer-songwriter has always been that laid back guy ever since his first solo EP Rock and Roll Night Club. Since its release, DeMarco’s music has earned him a dedicated cult following of slackers embracing his “I just woke up like this” lifestyle. 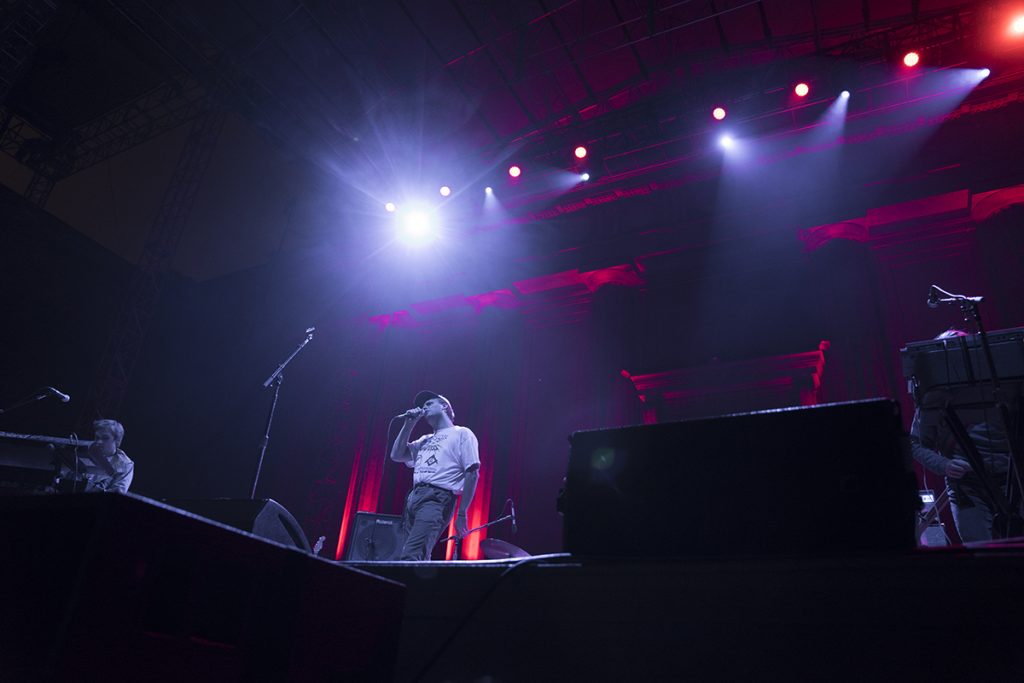 His former bandmates have splintered off to solo projects as well. Former DeMarco guitarist Peter Sagar of Homeshake (and the night’s opener) carved out a space for himself in lo-fi R&B and synth-pop but it very much exists within the same universe as DeMarco’s. Pierce McGarry of Walter TV did once sport DeMarco on bass, however, McGarry has since recorded and toured on his own. Again, Walter TV’s music is not so different either.

DeMarco could yet again influence his former bandmates and other aspiring Mac-heads. The release of This Old Dog turns down the silliness of his last projects in favor of a more honest approach. This is what DeMarco said about his dad in an interview with Pitchfork: “Well, I have a strange relationship with my dad. He’s kind of a piece of shit. But he’s my dad, so God bless him.” Not surprisingly, the opening track to the record is a song titled “My Old Man” where an aging DeMarco is worried about turning into his father. And the final track, “Watching Him Fade Away,” gives us the singer lamenting his disappearance.

At the Greek Theatre on the UC Berkeley campus, the band came out to the screams and cheers of thousands. The band started off with the synth soaked “On the Level” off This Old Dog. The very icy atmosphere the song creates was a slow burner of an opener. Yet, its infectious lyrics had everyone singing along. The very popular “Salad Days” came next. Its “la-la” chorus is always really fun to sing in a crowd trying to reach those high notes.

DeMarco once again dug deeper into his discography with “The Stars Keep On Calling My Name” off his breakout record 2. The song is a jangly pop rock tune with a very bubbly guitar solo towards the end. 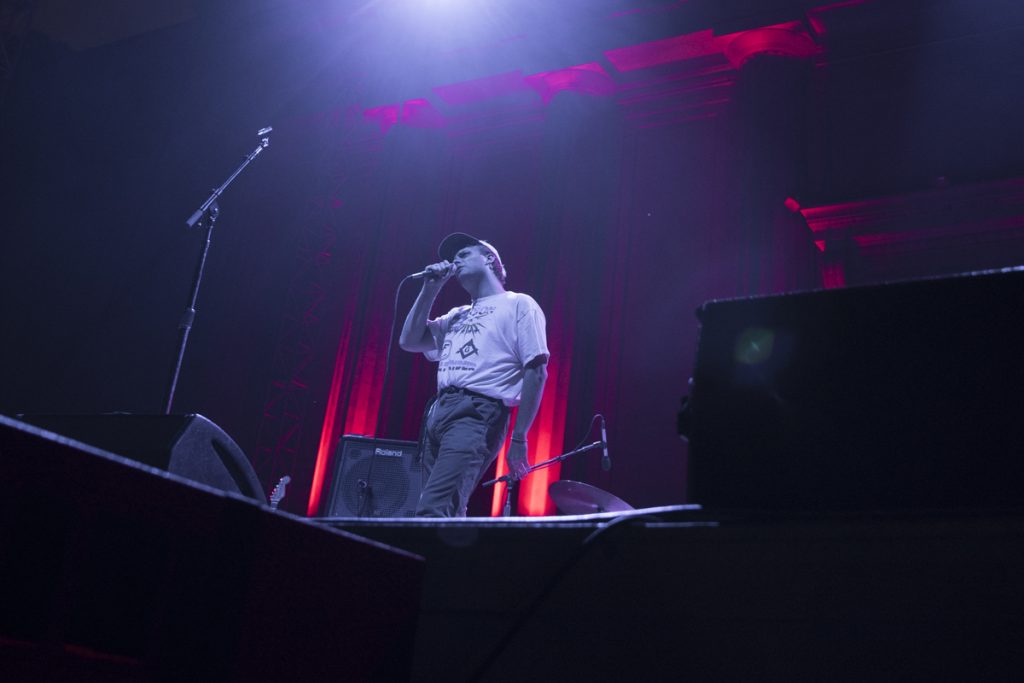 While the singer’s latest release has the artist looking inward and pulling out bad memories, there are songs that still have that touch of playfulness and love. Like the acoustic “Still Beating” and the fantastic “For the First Time.” The latter song is one of DeMarco’s greatest love songs ever.

Of course, a DeMarco set is not complete without “Ode to Viceroy.” Another love song but this one is about his favorite brand of cigarettes. The sluggish vocals and twangy guitars are so Mac that it’s impossible to accidentally duplicate. 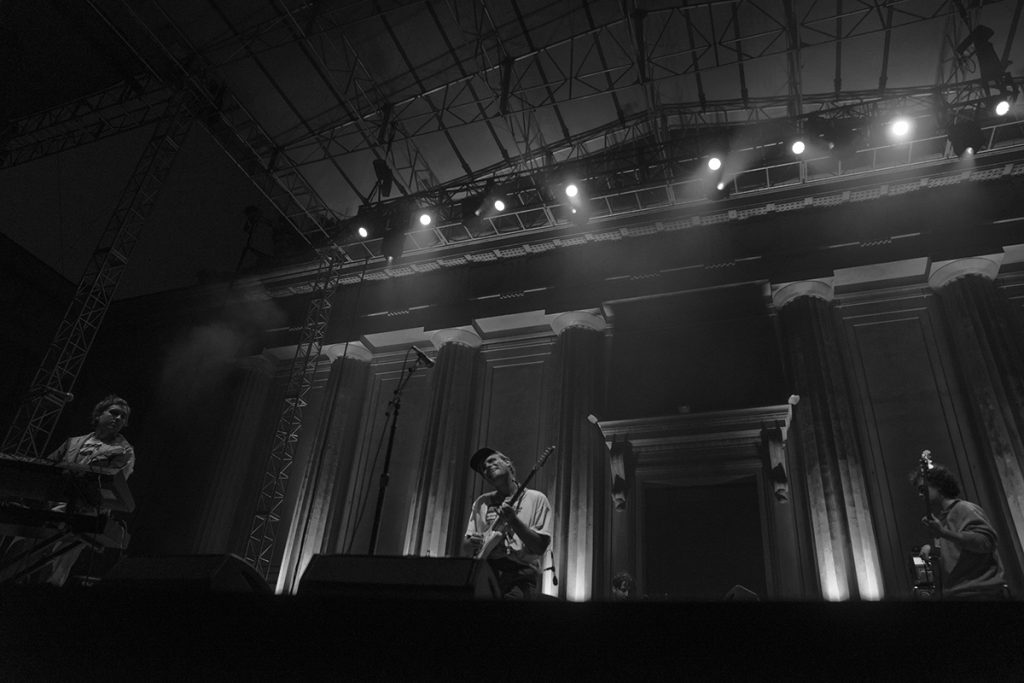 DeMarco and crew had us sing along to Nat King Cole’s famous rendition of “The Christmas Song (Merry Christmas to You).” Some of the crowd couldn’t get into it but DeMarco urged us to join in. “Come on, guys. Christmas is, like, four months away.” Covers are not unexpected at Mac DeMarco shows. In fact, with each show, it’s like a guessing game. Which artist will DeMarco have us sing along to? Lana Del Rey? Weezer? Rammstein? Bob Marley? Metallica? You’re never really sure.

How about Vanessa Carlton? Yes, the girl who sang “A Thousand Miles” got a nod from Mac and the boys. Though everything from the chorus to the verses was only sung using the words “making my way downtown.” An impromptu jam quickly followed accompanied by the blinding lights of everyone’s smart phone flashlights. DeMarco himself was stunned at the audience’s coordination. 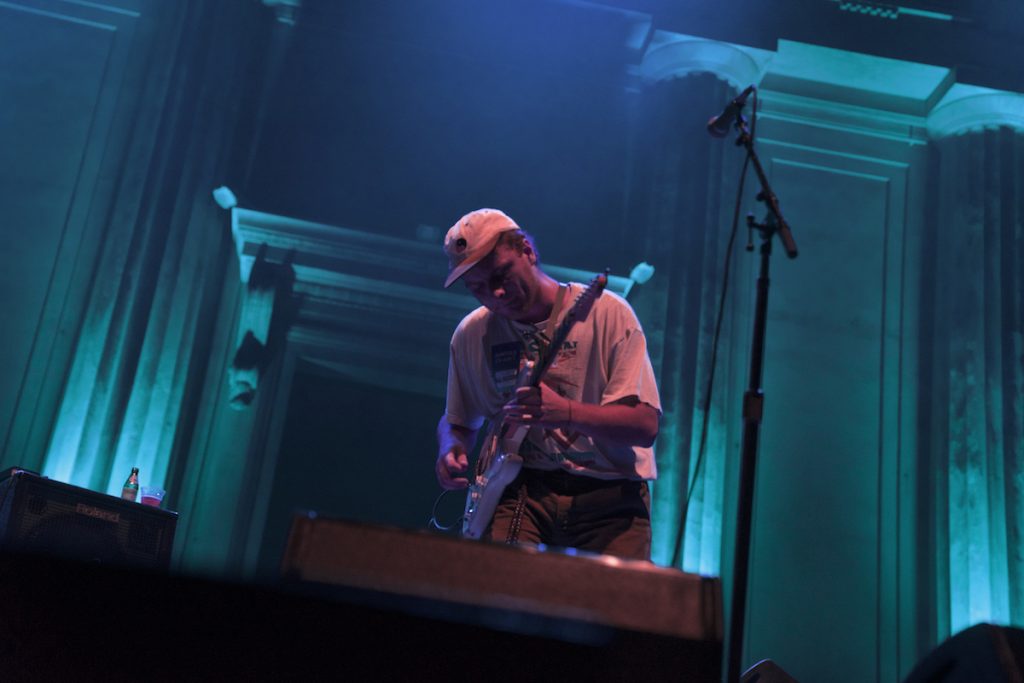 The rendition of “My Kind of Woman” was mostly an acapella experiment with the audience. As the band lightly played their instruments, it was the fans that took over the song. The combined voices of thousands were really beautiful.

The second to last song of the night was “Moonlight on the River.” The song was stretched to about ten minutes with a wave of guitar noise slowly eating up the song. As the piece grew more chaotic, so did Mac. He kicked a couple of amps and his microphone. 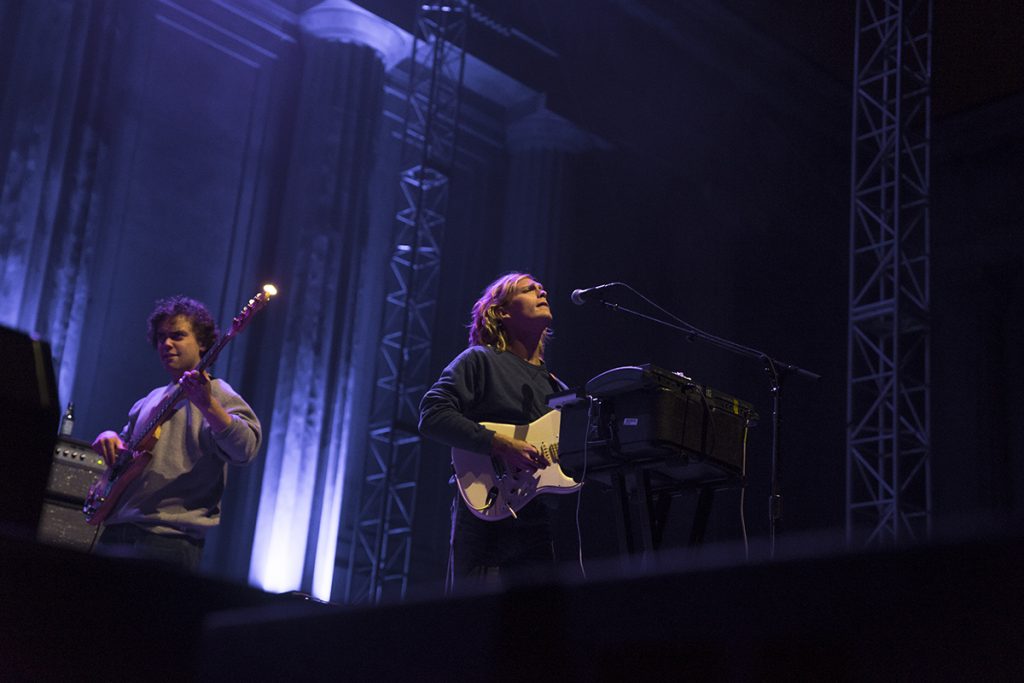 He then flew headfirst into his beloved audience that quickly tumbled like dominoes. Mac went down with the crowd that couldn’t help get a piece of him. His shoes and socks were stolen, his shirt was stretched as well. Adding fuel to the fire, many jumped onto the shoulders of fans to crowd surf towards Mac. The horrible screams of fallen attendees rippled through the audience. “Pull me up! Pull me up!” yelled Mac, and the singer was (mostly) safely returned to the stage.

The set ended with “Chamber of Reflection” off of Salad Days.

DeMarco returned to sing “Watching Him Fade Away” and he too faded into the night.

The first opener of the night was the brother duo The Garden. The mostly distorted beats and garbled vocals actually pumped up the crowd. Multiple mosh pits broke out as a result. Many were wondering, however, if Mac was trolling us. Homeshake quickly calmed things with a set list of hypnotic bedroom pop.

Setlist: On the Level | Salad Days | The Stars Keep On Calling My Name | Still Beating | For the First Time | A Heart Like Hers | This Old Dog | Ode to Viceroy | The Christmas Song (Nat King Cole cover) | One More Love Song | Dreams From Yesterday | A Thousand Miles (Vanessa Carlton cover) | My Kind of Woman | Freaking Out the Neighborhood | Moonlight on the River | Chamber of Reflection | Watching Him Fade Away

Find out more about Mac DeMarco on his (website. )

Everything you need to know about Homeshake can be found (here)

More about The Garden can be found on their (website.