Pop quiz: What starts with the theme from 2001 and ends with The Ramones’ “Pinhead?” The answer is given directly above, in case it isn’t immediately obvious. At the start, it was solo piano by Misfit Brendan Getzell and at the end it was Kat Robichaud singing and as much of the audience as could fit the stage dancing around her. That 90 minutes of this improbability didn’t seem the least bit awkward is a sure sign of a great show. Because this was the “Cinephilia” edition of the Cabaret, there were plenty of film references in song, outfits, and sketches. 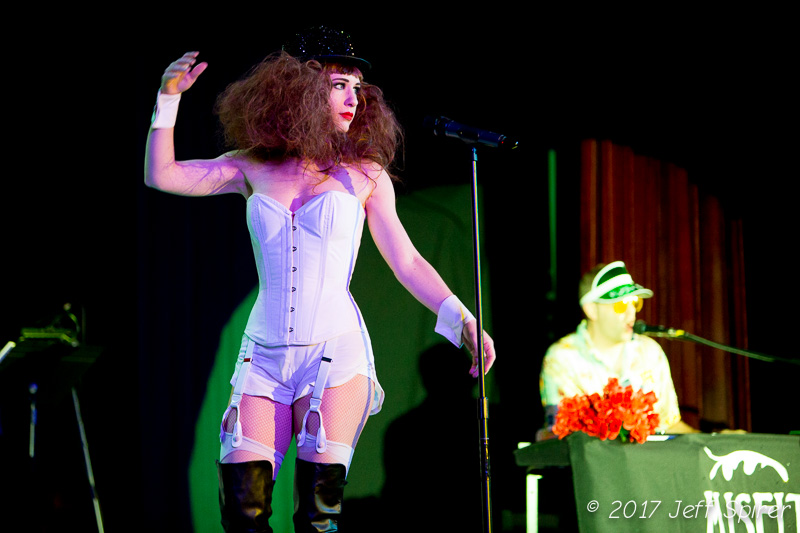 Kat Robichaud has been reviewed and interviewed in SF Sonic in the past (links at the end) but this is the first time SF Sonic has visited Robichaud’s Misfit Cabaret. The Cabaret takes place in a Chinatown theater that shows little obvious signs of having changed in the 90-plus years since it first opened. High ceilings and a full-size stage provide the perfect environment for a show like the Misfit Cabaret. 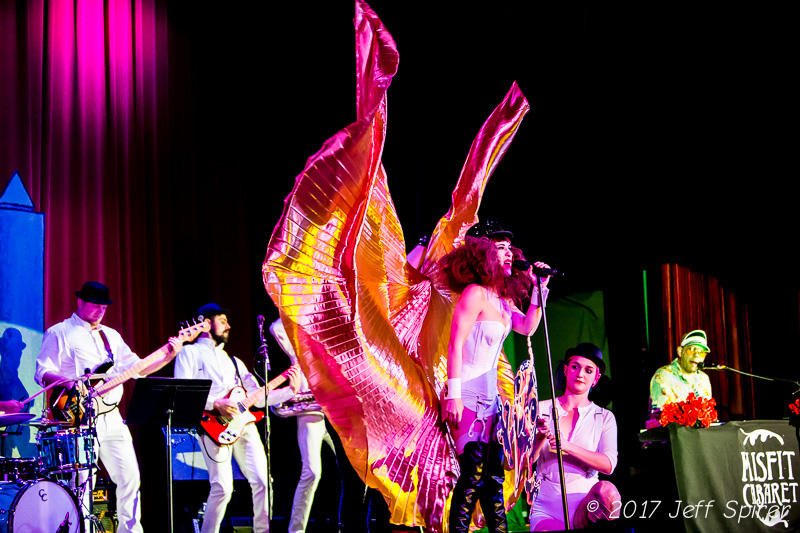 Robichaud is the perfect host for such an event. In a variety of outfits and roles, she struts across the stage, flirts with the audience from onstage and in the seats, dances with her co-conspirators, and sings with that Voice. Yes, it’s the voice from The Voice (see our interview with her for more about her time on the show), but freed of the TV restrictions, the versatility on display conveys a cinema all its own. Or more like musical theater. Whatever it is, there’s a dramatic flair that can go anywhere. She could sing Rocky Horror Picture Show alone and bring every character alive. 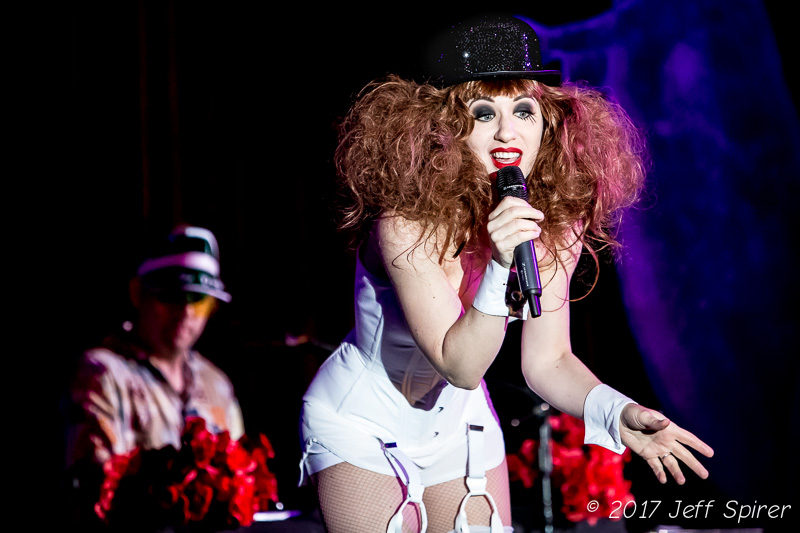 How wide that universe is shone from the opening moments when Robichaud sang a medley with dancers around her. The medley went from Cat Stevens to Iggy Pop (“Lust for Life,” nice to hear someone cover Iggy other than “Dog”) to “Singing in the Rain” to Steppenwolf to David Bowie (“Cat People”) to Spinal Tap to Prince to Simon and Garfunkel to, yes , Wayne Newton to Simple Minds. Every transition felt natural and the audience cooed and oo’d in recognition of each segment. And Robichaud could have walked off stage at that moment and everyone would have gotten an experience worth remembering. Fortunately, it did go on. 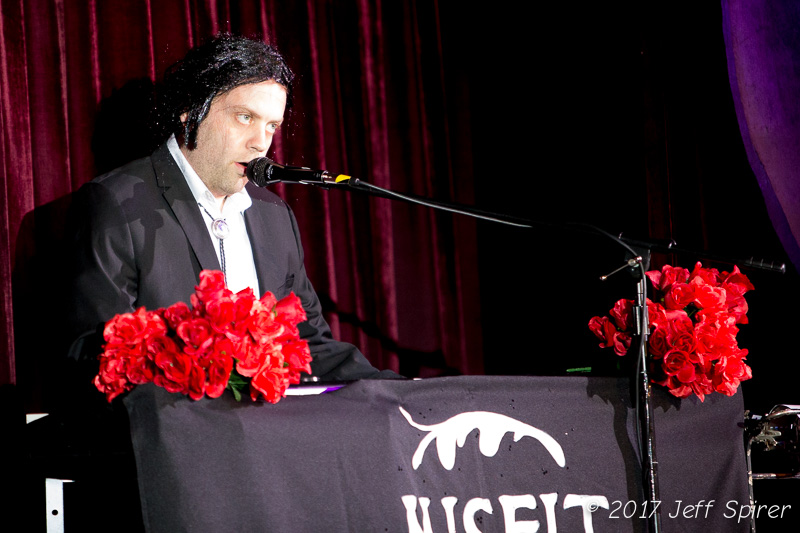 The Darling Misfits – Brendan Getzell (keys), Adam Dragland (guitar), RJ Pal (drums), Tim Baker (bass), and PJ Bottoms (sax) – behind, well except Getzell, who is usually next to Robichaud, play tight behind Robichaud with no showboating. It’s obvious this is put together as a team, not just a backup band, with a flair for non-intrusive drama while playing.

The Clockwork Orange theme that opened the show was dramatic in its black and white costuming, which Robichaud amped up with huge shiny wings. The theme held fast through the aerial performance of Nina Sawant. Starting out dressed as Samuel Jackson’s Pulp Fiction character Jules Winnfield, Grace Bones took off her clothes until hitting the legally permissible limit, a truly unique burlesque performance. Mary Vice did an Eraserhead drag routine, reaching into the audience from the stage.

Music took a left turn with Oinga Boinga, four women who appeared to have just escaped from an Ed Wood set, provided a humorous twist with their “we’re from outer space” set. This could have been just an oddball act, but instead was an oddball act with bouncy beats and 80s post-punk sound. 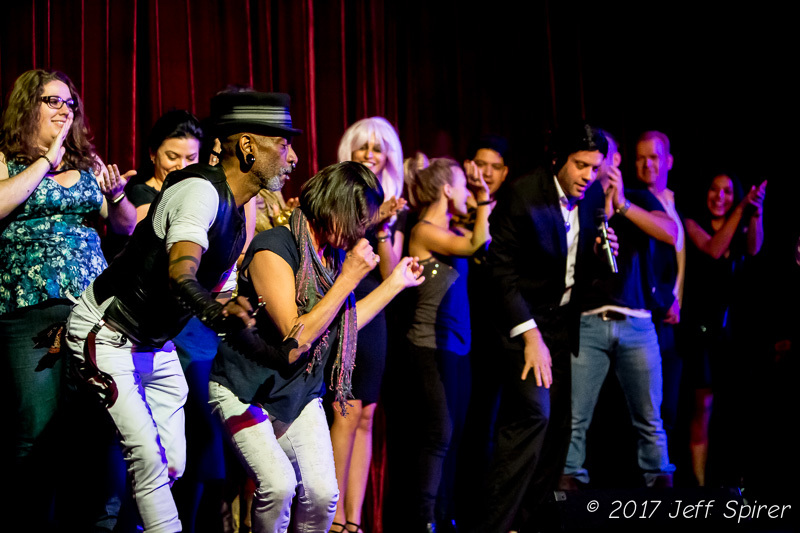 The intermission provided a twist competition; audience members were invited onto the stage and twisted across the stage in pairs. Hosted by pianist Getzell and Misfit Cabaret co-producer Jordan Nathan, each twisting couple was cheered by the audience, with a terrific duo winning. 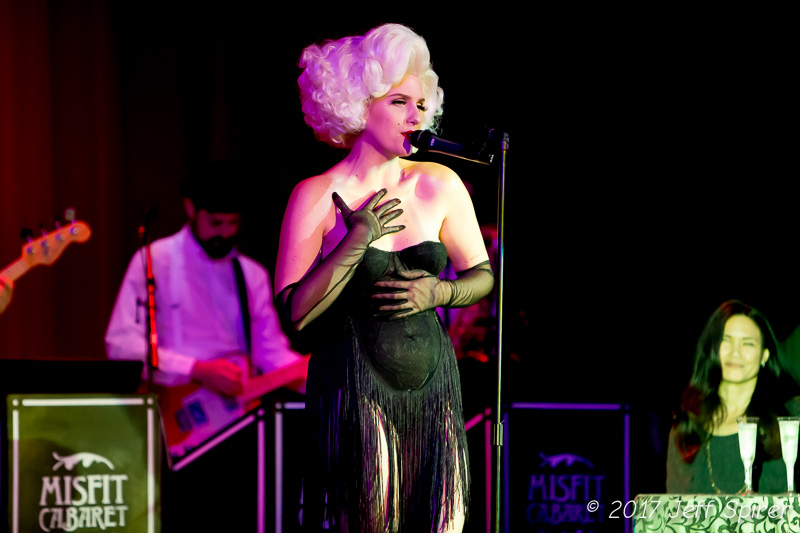 Marilyn Monroe, played by Jillian Gnarling, made an appearance, with two couples brought on stage to sit at tables while Monroe romanced them with “I Wanna Be Loved By You.” Gnarling sang to and kissed the couples and drank along with them, accompanied by The Darling Misfits. 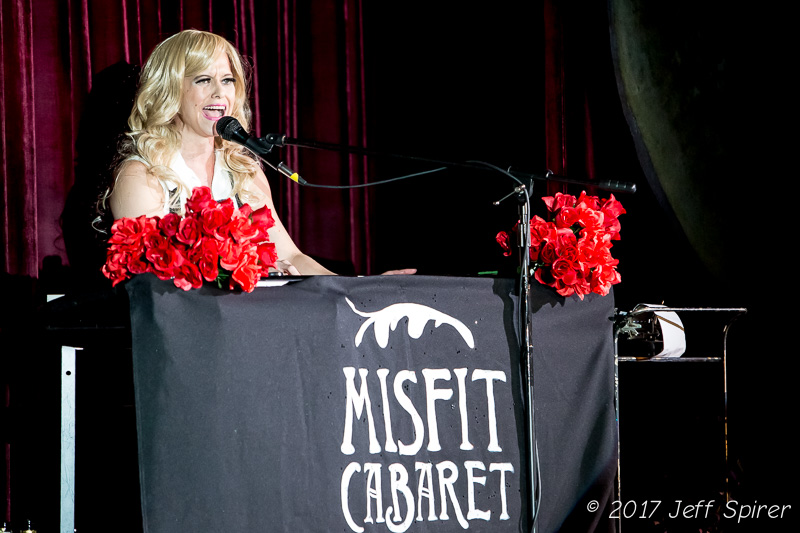 Victoria Victrola, well-known in the San Francisco “cabaret scene,” known best her zombie performances with Victoria and The Vaudevillians, performed solo at the piano dressed in a skin-revealing Barbarella outfit. Her two songs, the vice-ridden “Alcohol, Sex, and Cigarettes” and the more profane “Fuck Gravity” provided laughs and sing-a-longs from the audience. 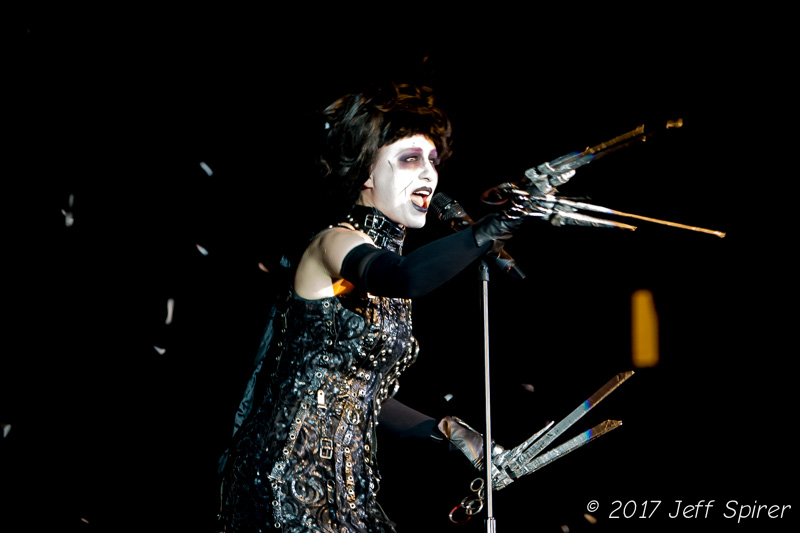 And then there was Robichaud as Edward Scissorhands. The look was terrific and Robichaud managed to convey the same frustration as Scissorhands as she sang and moved about the stage. In the end, Robichaud/Scissorhands sang “I’ve Had the Time of My Life” from Dirty Dancing, followed by “Pinhead,” inviting the audience to dance on the stage to her “Gabba Gabba Heys.” It was a fitting end to an event by and for “misfits,” with Robichaud surrounded by fans who were rightfully delighted.

Check out the SF Sonic interview with Kat Robichaud here.