John Zorn returned to The Chapel for a grand celebration of his 65th birthday packed with 7 remarkable shows in 4 days and accompanied with an incredible array of accomplished musicians delivering Zorn’s compositions to life. The New York native has been a prominent maestro in music history for the past four decades and continues to showcase his endless capabilities of creativity as a saxophonist, producer, and composer of experimental music and film scores. 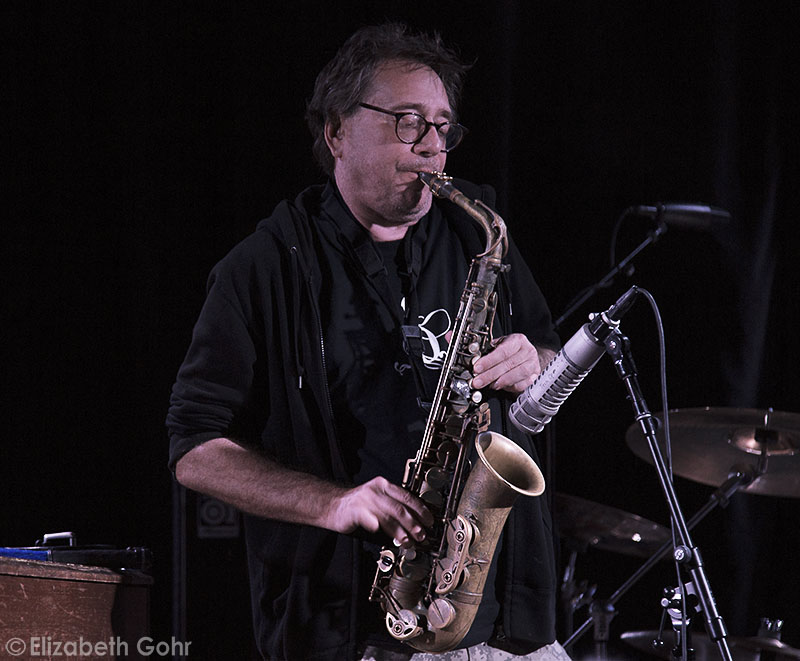 Night two of the series and on the night of Zorn’s 65th birthday featured two special shows that instantly sold out in lieu of the generous lineup. The first show was an improv benefit for The Stone, a non profit avant-garde performance space that Zorn has kept active in New York City for the past 13 years and provides an inspirational haven for ambitious artists and musicians. 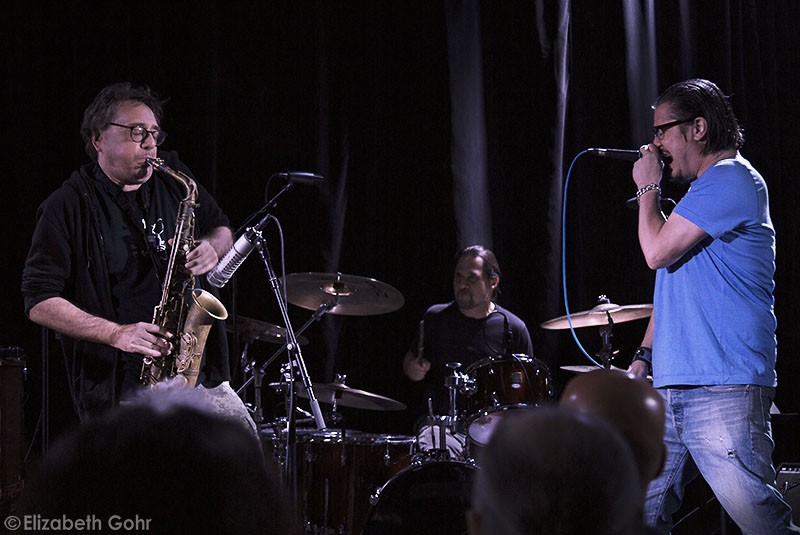 The improv master John Zorn was joined by the Dead Cross bandmates, Mike Patton and Dave Lombardo, who are no strangers to Zorn’s realm of unscripted eccentricity. The trio instantly took off full speed with Zorn’s wailing sax, Lombardo’s double bass and blast beats and with Patton infusing primal screams, grunts and growls. The erratic conversation of sounds shifted around the lead of Zorn’s capricious tendencies making for an enticing presentation of their combined talents in a completely in the moment movement. 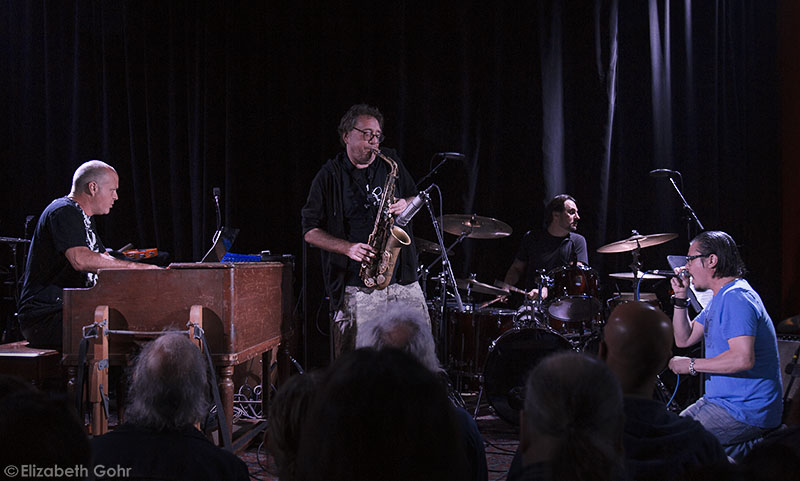 Adding to the improv stepped in the great organist/pianist John Medeski seated behind the vintage Hammond B3 organ, who coalesced his haunting keys to calm down the exotic arrangement of chaos. Zorn, Lombardo and Patton graciously exited only to introduce guitarist Matt Hollenberg to join Medeski for their otherworldly improv before adding in another key player, Kenny Grohowski on drums. Zorn rejoined this crew with some sultry jazz slowly picking up speed all the while acting as a silent composer with the other players eyes glancing over as they fed off his subtle gestures to conduct such a session. 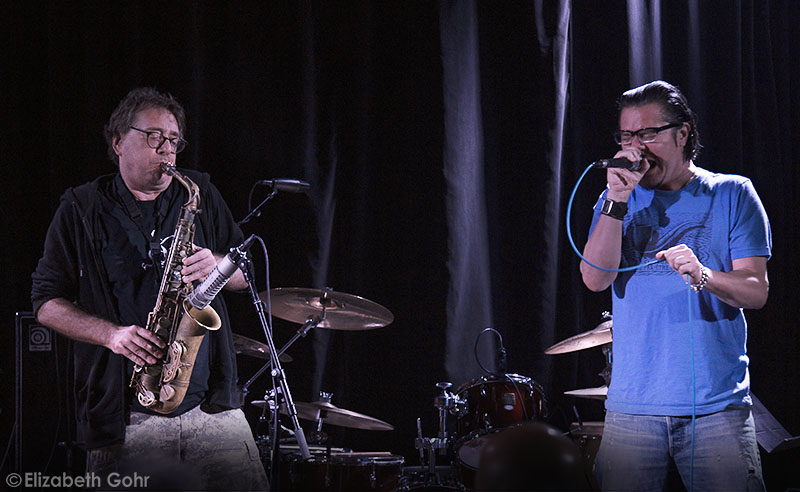 Another rotation back to just Zorn and Patton, with Zorn emitting his signature wind squeaks and feathered creature sqawks while Patton spoke his bizarre tongue of wordless chatter to match such obscurity. Lombardo emerged with his exceptional skills on the skins as the trio once again radiated their special chemistry together in this brief yet very engaging set. 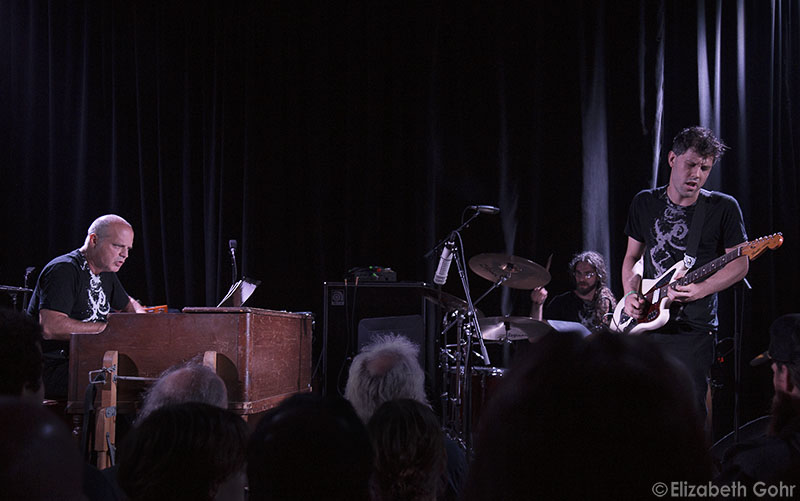 Players Medeski, Hollenberg, and Grohowski rotated back in for Simulacrum, an album composed by Zorn and released in 2015 on Zorn’s label Tzadik. Simulacrum administered a progressive jazz fusion with rapid firing guitar riffs from Hollenberg and roaring drum fills from Grohowski simulating thunderous explosions throughout. Medeski provided intricately woven melodies in a swirling and crashing form that sent the tone wheels of the Hammond spinning along with the minds of many enthusiasts. 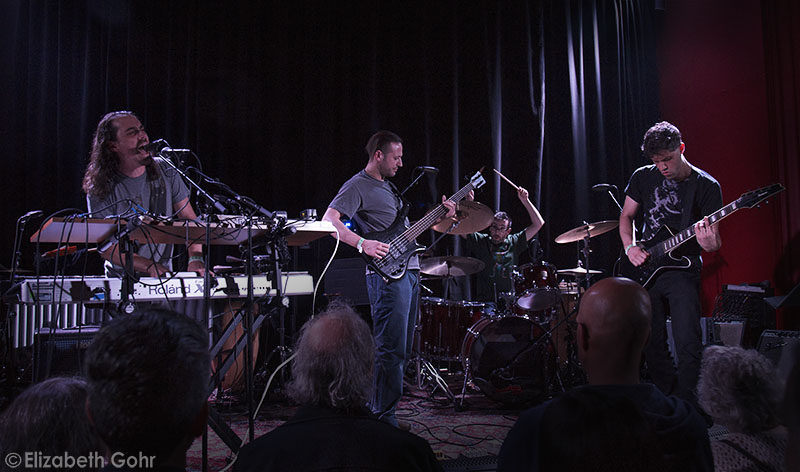 The second show of the night featured a double bill of outstanding bands performing selections from Masada, a collection of ten song books comprised of around 600 compositions by John Zorn. The idea behind Masada was to explore Jewish music in an untraditional approach resulting in extremely complex music that requires an expert level of performance. The first band to take the stage was Cleric, featuring Hollenberg back on guitar, Nick Shellenberger on vocals and keys, Dan Kennedy on bass, and Larry Kwartowitz on drums. Cleric performed Masada Book Three: The Book Beriah, Vol. 2: Chokhma, with Shellenberger providing guttural metal screams amongst the surge of power flowing wildly in this pleasantly derailed state of commotion. 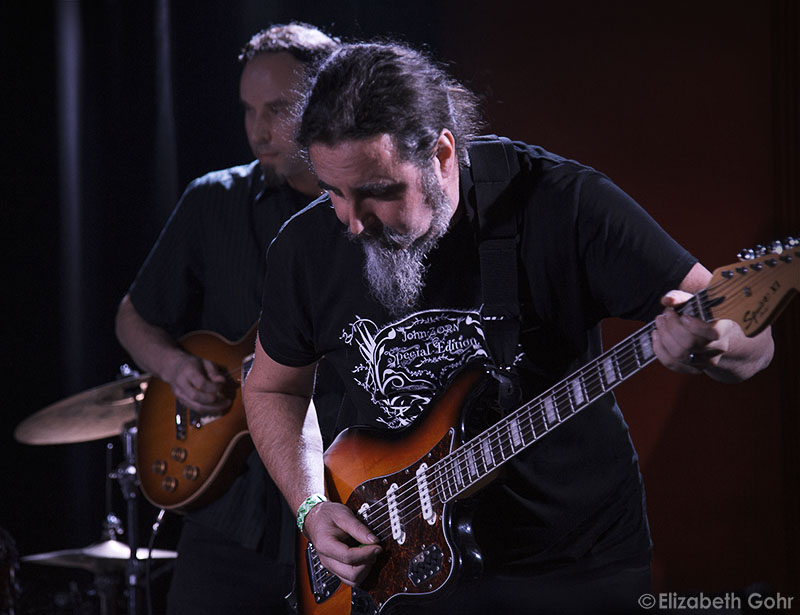 The second band to take the stage in performing Masada was Secret Chiefs 3, widely known to be an exemplary match in animating the spirit of Zorn’s work. Secret Chiefs 3 serves as a hub for seven different bands and comprising many talented musicians all led by guitarist and composer Trey Spruance, who has also served as an essential collaborative force with Mike Patton in bands Mr. Bungle and Faith No More. Zorn even produced Mr. Bungle’s debut album back in 1991 and has since established a great influence on the profound careers of these two prodigies as well as many others. Joining Spruance was Jason Schimmel on guitar, Matt Lebofsky on keyboards, Eywind Kang on violin, and Shanir Blumenkranz on bass. Drummers and percussionists Ches Smith and Kenny Grohowski switched spots between songs from drum set to the percussive instruments of marimba, congas, tambourine, and shakers, all adding to this multi dimensional music. 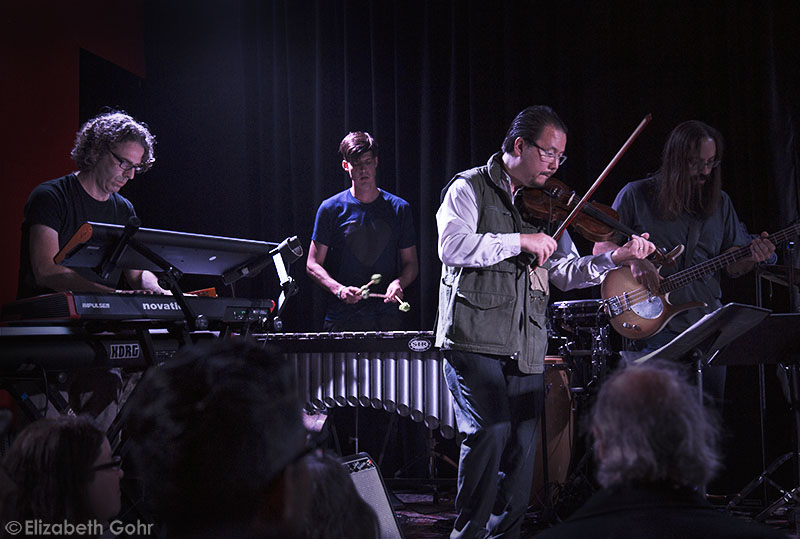 Secret Chiefs 3’s proficient abilities span into all genres of music from surf rock to death metal while also producing intellectual arrangements from Zorn’s Masada song books. Fresh material from Secret Chiefs 3’s new record entitled Malkhut, part of Zorn’s book Beriah, was introduced and proved their exhaustive intricacy tackling perplexing time signatures. The band also touched base on selections from Masada Book Two: Book of Angels (Xaphan) including beautiful and mystifying renditions of the songs “Bezriel” and “Barakiel.” Truly no better way to celebrate the life of such an inspiring musician then with all the musicians he has inspired.