John 5 and The Creatures put on an awesome show at The DNA Lounge as their tour made its way through San Francisco recently. Guitarist, John 5, whose real name is John Lowery, hails from Grosse Point Michigan and is simply one of the most mind-blowing guitarists out in music today. The list of artists he’s worked with includes some of the biggest headlining rock bands in the world such as Marilyn Manson, Rob Zombie, Alice Cooper, David Lee Roth, Paul Stanley, Rod Stewart, and Rob Halford. While he has remained the guitarist for Rob Zombie since 2005, John 5 has recorded eight solo instrumental records that have been critically acclaimed; he has worked with artists such as Albert Lee, Steve Vai, Joe Satriani, and Jim Root. 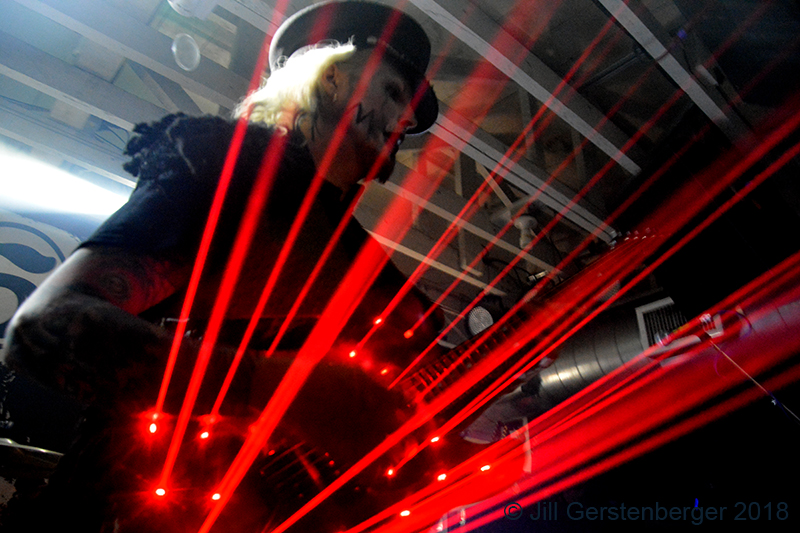 In 2015, John 5 went out on the road as a solo act as John 5 and The Creatures with Logan Miles Nix on drums and Ian Ross on bass. This was the incredible line-up he had with him at The DNA and they seem to get better and better every time they come through town. While the thought of spending an evening listening to a live guitar-centered instrumental show may only appeal to a few guitar nerds, John 5 has created a highly entertaining production that showed off his musical prowess while being visually stimulating as well. His love of horror movies and guitar gadgets play a huge part in the show; as he stepped out onstage with a white shock of hair, his face painted like a ghoul and a full-length brocade overcoat with fantasy fur shoulders he almost looked like he stepped out of Nosferatu to play some guitar for us. The fronts of his amps were tv screens which didn’t affect the sound but they projected images from old classic horror movies like The Omen and The Shining during the set. 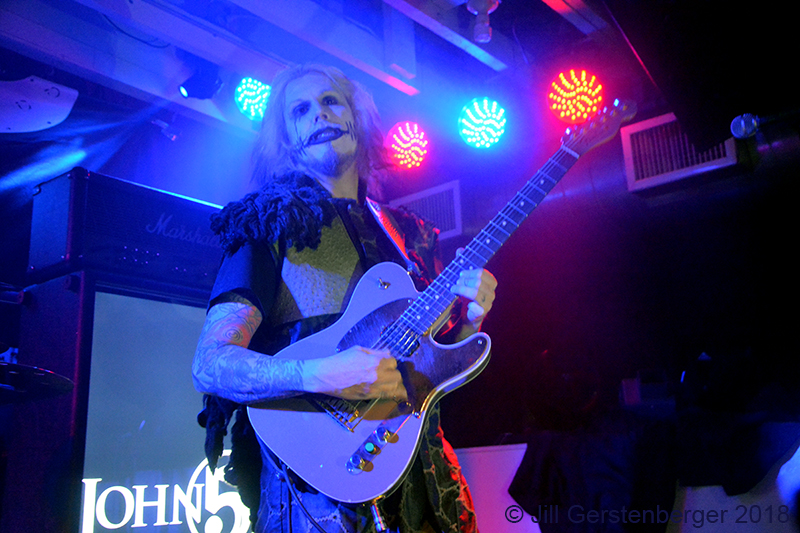 John 5 loves Telecasters and not only has a huge collection of them but he has some really interesting ones that he’s created with a builder that have a variety of lights and lasers, including one that looks like it’s made of plexiglass with fluorescent green liquid floating inside like a lava lamp. They all look super cool when the lights are out and John 5 changes them out for each song while mixing up his look with a variety of masks and hats. All of this just adds to the show and doesn’t take away from the fact that he is an incredible guitar player. 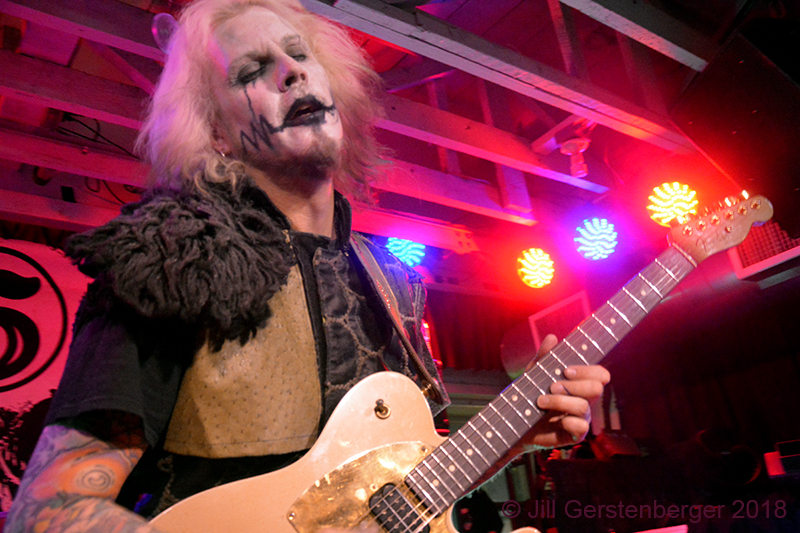 John 5 plays a wide variety of styles from Eddie Van Halen hammering to bluegrass and metal. He utilizes every inch of the guitar for different sounds including tapping on the knobs, plucking up near the headstock, and talking in to the pickups. He is clearly passionate about playing the guitar and if his Instagram is any indication, he seems to have a guitar in his hands constantly. It really shows in his playing though as his speed and accuracy are jaw dropping good and his fingers seems to fly off the frets. 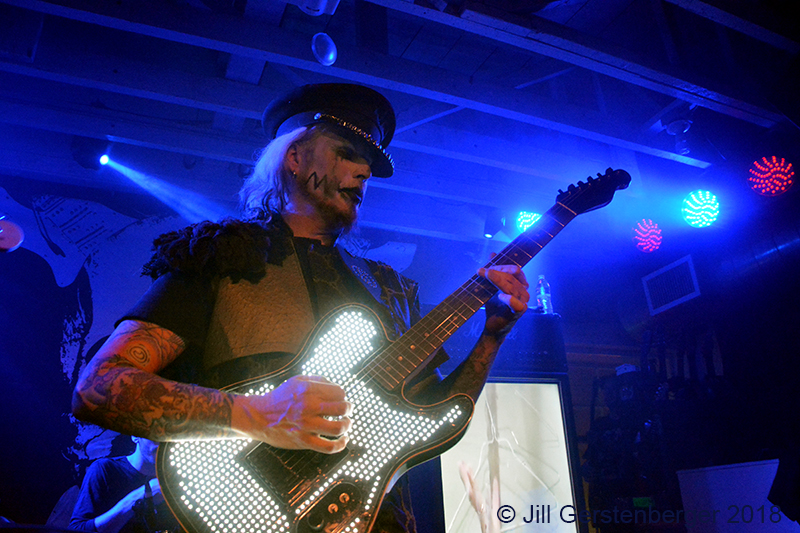 Some of the highlights included a cover of Metallica’s “Enter Sandman,” which had the crowd singing along, and “Black Grass Plague,” which is a neat tune combining bluegrass and metal, with John 5 switching from guitar to mandolin and then banjo during the song. “Guitar, Tits and Monsters” was also a great tune that had a 70s hard rock vibe. 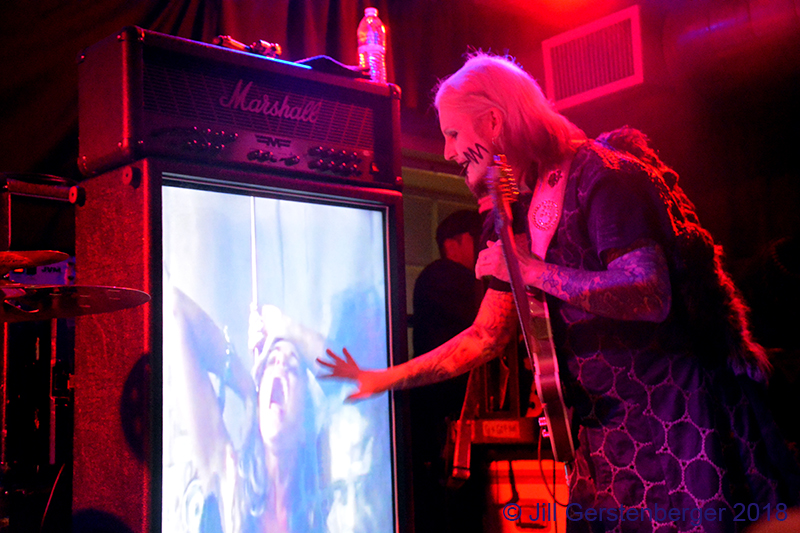 They played the smaller room at The DNA which held around 300 people but the place was packed to the rafters and the tight space added to the intimacy of the show. John 5 commented on how this was exactly the type of club he used to go to when he was first getting into music and how great it made him feel to see all ages there including some kids that he handed picks to. At one point during the show he walked into the center of the crowd while playing guitar and everyone went wild. He finished off the set with a medley of tunes that included some Van Halen, Ted Nugent, White Zombie, The Police, Rush, Tom Petty, and Led Zeppelin, all of which he played masterfully. 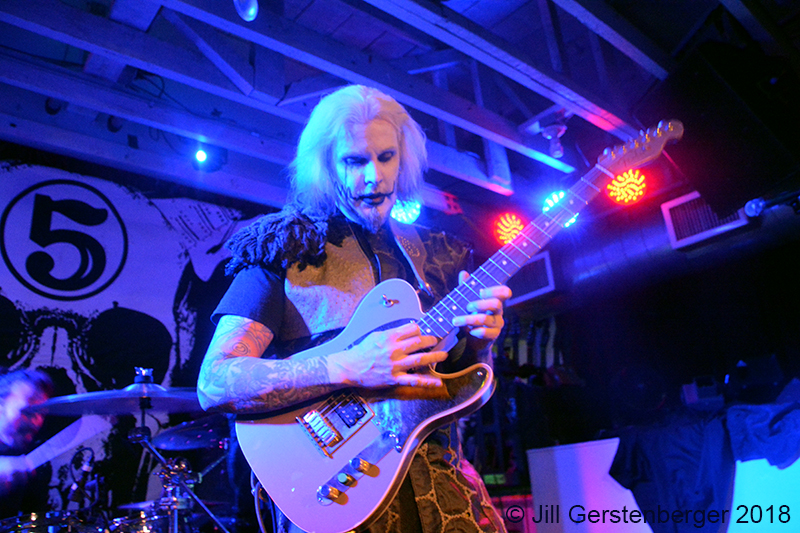 One of the cool things spotted at the merch table on the way out was a John 5 limited edition latex mask that was hand crafted and hand painted by special effects master Scott Blake. The mask was white and had the black squiggle across the mouth and a goatee so it looked just like John 5 when he first walked on stage. They still have a few of these up in their online store for purchase but they are very limited edition so it’s best to act fast if you would like one. We really enjoyed seeing this incredible player in such an intimate setting and we hope he comes back here soon so that we can see him again. Until then our memories are etched with this incredible evening of unforgettable music and imagery.

Opening for John 5 was a four-piece hard rock band called Hero Jr from Indianapolis that we really enjoyed. They had a sound similar to the great band Mother Love Bone that was one of the forerunners in the Seattle scene and a precursor to the grunge movement. A couple of their tunes really stood out as being strong including “Jump Ship” and “Anger Room,” which had some nice phrasing and lyrics. The band had great energy and the crowd really dug them. Keep an eye out for them as they seem to tour regularly and will probably move up to being headliners soon.

Here’s a slideshow with more photos of John 5 and The Creatures by Jill Gerstenberger: