There has been a long running argument amongst music fans. A conundrum that has cut a wide swath of opinion between music aficionados and artists themselves. It centers on the question of whether or not EDM (Electronic Dance Music) should be considered ‘real’ music. Further, and at the heart of the argument is whether its originators can be considered ‘real’ musicians. 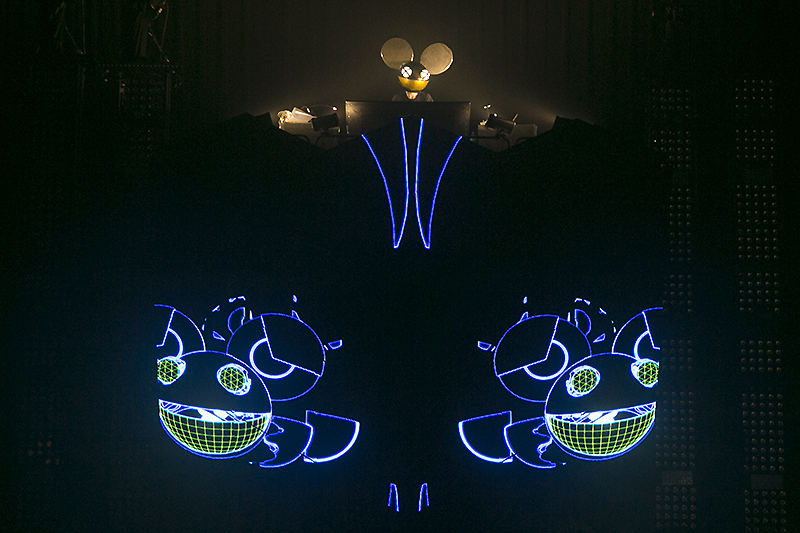 On one side are the musical purists. Those who only consider it true music when it comes from musicians who play traditional instruments to create and perform their songs. On the other side of the aisle, proponents of EDM will counter that their music of choice is indeed real and performed by real musicians, contending that the instrument they master is the computer.

Hitting the Bay Area to make the case for EDM recently was Deadmau5 (aka Joel Zimmerman), who rolled through the Fox in Oakland for a series of sold out sets. Deadmau5 has been on the forefront of legitimizing EDM as a viable art form since first coming on the underground scene out of Canada in 1998. Being an ambassador of the genre, he has even been in the middle of shade-throwing battles between EDM and ‘real’ bands (see the exchange between Deadmau5 and Arcade Fire that came out of both performing at Coachella in 2014). 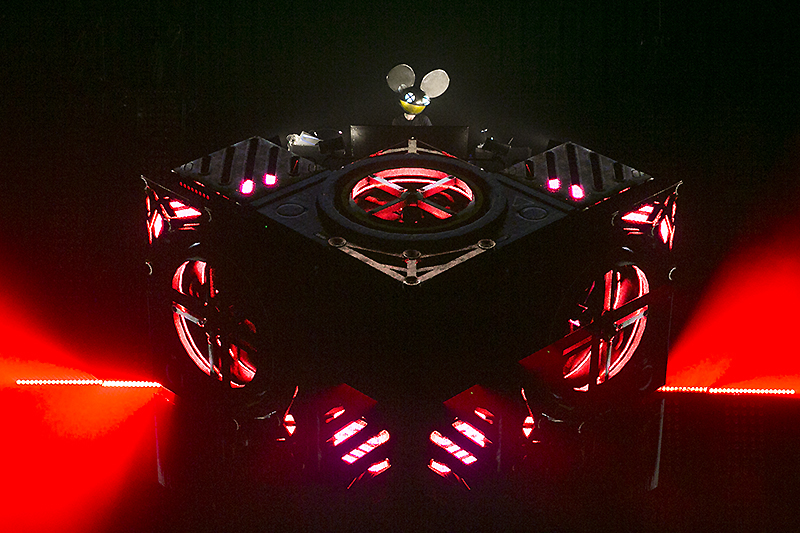 With the Fox dimly lit, hundreds of pairs of green neon mouse ears riding atop the heads of fans illuminated the darkness. To the dismay of the Disney Corporation, the ears (which are similar to Mickey Mouse ears) have become the symbol of the Deadmau5 brand.

After a lengthy break to set the stage (and amp the anticipation) the room went black and the stage fired up with a huge 3D screen sparking to life. At the top of the screen (some twelve to fifteen feet above the stage), the helmeted figure of Deadmau5 appeared at his DJ console with rolling variations of the Deadmau5 symbol shooting across the face of the helmet. Like mice following a pied piper, the crowd pushed to the front. 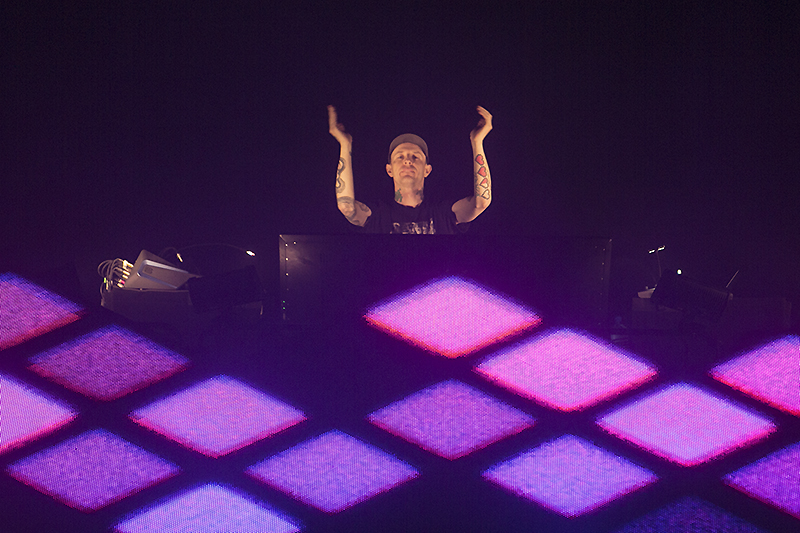 The sound system then began to murmur with layers of synthesized keyboards to start the set opener ‘Imaginary Friends.’ The boom of high BPM (beats per minute) electronic drums then faded in and kicked the party into motion. The crowd was an ocean of bobbing heads with floating neon mouse ears.

While the music played, images constantly shifted across the massive screen, ranging from Tron-style ‘chasing lines’ to Rubik’s cubes, fractals, and everything in between. The scene was surreal and palpably raised the energy level in the room…..just like the opening of any other ‘real’ rock show. 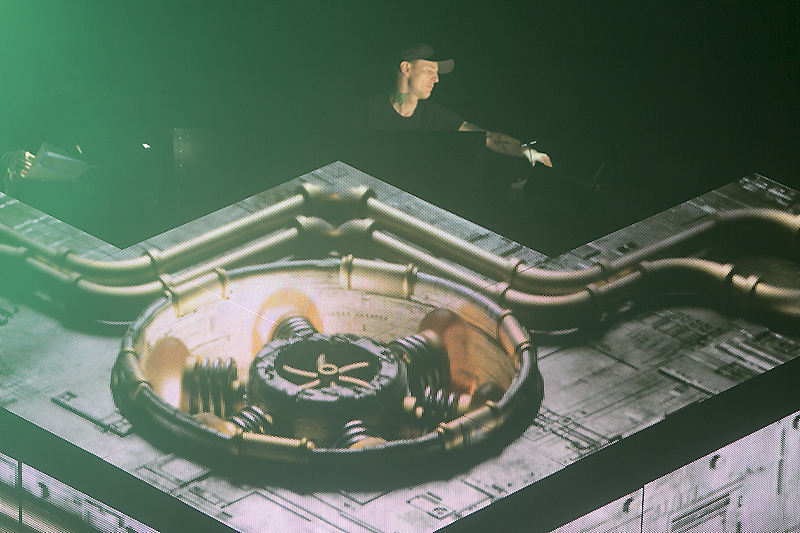 However where the show started like any other ‘real’ rock show, that is also where the similarities tended to end. The thing that EDM lacks that bands have is the dynamism that comes from real performers interacting with the crowd.

The fact the Deadmau5 is so high above the crowd loses the face to face energy that bands emote. On top of that, the thing that purists dislike about EDM is that there is no sense of risk or spontaneity. Where bands play tens of thousands of notes in a set, all with the real possibility that one of the players misses a note, this is lost with EDM where the notes are packaged for success. Case in point, there were times where Deadmau5 would yell to the crowd while clapping his hands for up to 15-20 seconds….all the while the music continued without missing a note or beat. 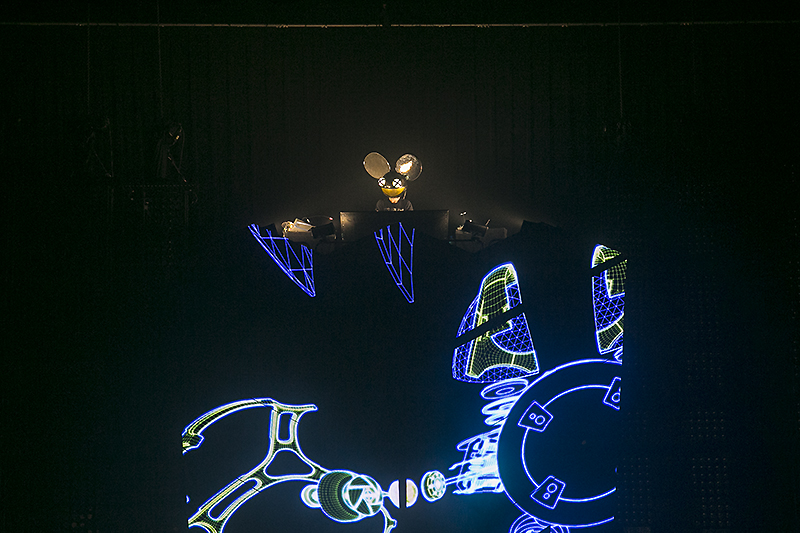 Because of this, the energy of the show remained flat, with the detachment of ‘artist’ and fans giving a sterile feel to the performance. It is almost the same feeling as being at the far back of a huge festival show and watching the performance on the large screens….it is a relatively artificial sense of being there.

Though the crowd did respond very positively to Deadmau5, dancing and sometimes chanting along to the pre-fabricated beats and voices, it more often seemed like they were just watching than experiencing. More folks just stood and talked while watching…some occasionally dancing in place, but the energy was definitely not like that of a band performance. 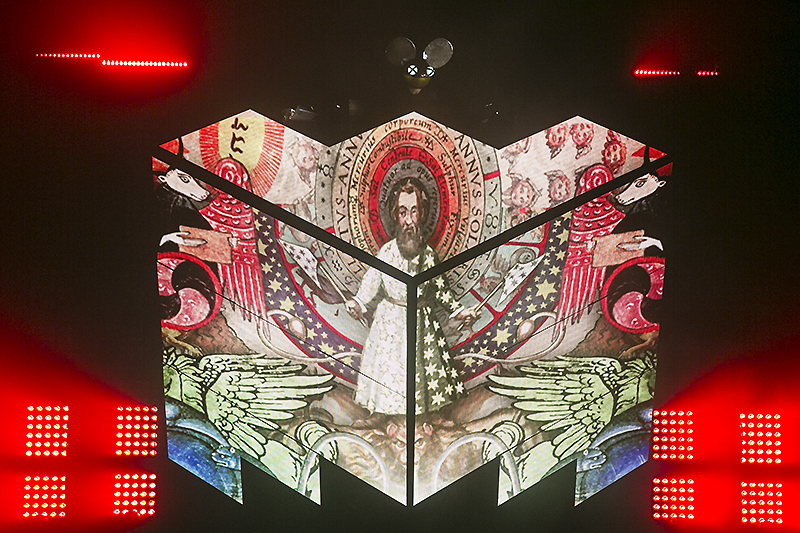 Come to think of it the energy was not even like that of a rave, where people lose themselves in the music and in dance. Being that the Bay Area was a hotbed of the electronic dance scene during the early 90s with roving parties such as Wicked, Wally World, and Just Add Water emerging from the fertile electronic underground, it would be interesting to see what Bay Area EDM pioneers like Garth, Jeno, Markie, and Carlos think about Deadmau5.

The scene was originally about the communal experience of dance immersion. It had more of an activist edge to it, kind of a version 2.0 of the hippie movement of the sixties…..that seems lost with EDM now. DeadMau5, in his cynical anxiety, even claims that he is a big reason that EDM has been commercialized to the extent that it has almost become a spectator sport. 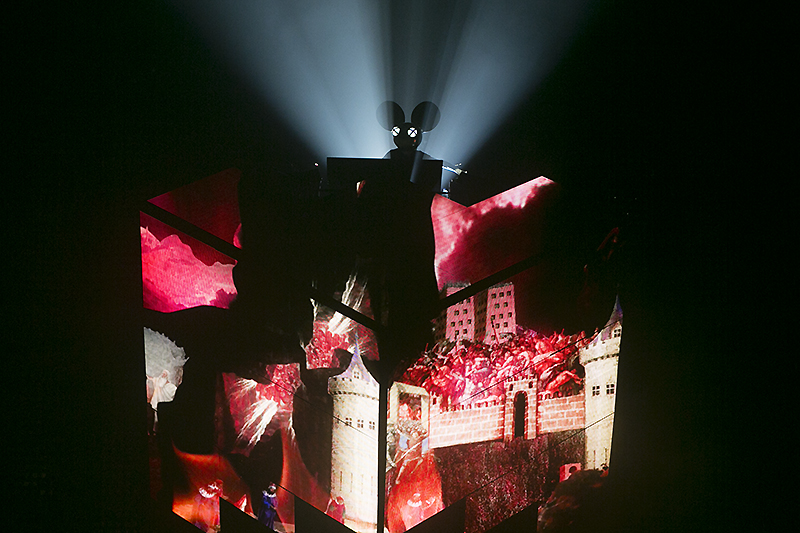 Regardless of which side of this argument you may find yourself, selling out three consecutive nights at the Fox equals musical success. Artistic integrity may be up for debate, but considering one person reaping the profits of sold out ticket sales and the endless (albeit very creative) merchandising makes Deadmau5 an undeniable musical icon.

Find out more about Deadmau5 here.