Rest assured. There was chemistry.

Fitted in slick black suits, Interpol stoically stood before the crowd, fog whirled around them, a dark blue lit the stage. The ominous opening chords to “Pioneer to the Falls” (Our Love to Admire, 2007) set the mood for their final night of tour at Berkeley’s Greek Theatre. Frontman Paul Banks strummed his guitar, his monotone voice harmonized with the track’s murky tempo.

Quickly shifting gears, the band played new track, “If You Really Love Nothing,” (Marauder, 2018). A spinning, illuminated disco ball glistened over the dancing crowd as bright lights flashed in sync with the melody. But it wasn’t long before fans screamed for the old stuff, like “Roland,” a track off their immaculate debut album, Turn on the Bright Lights. 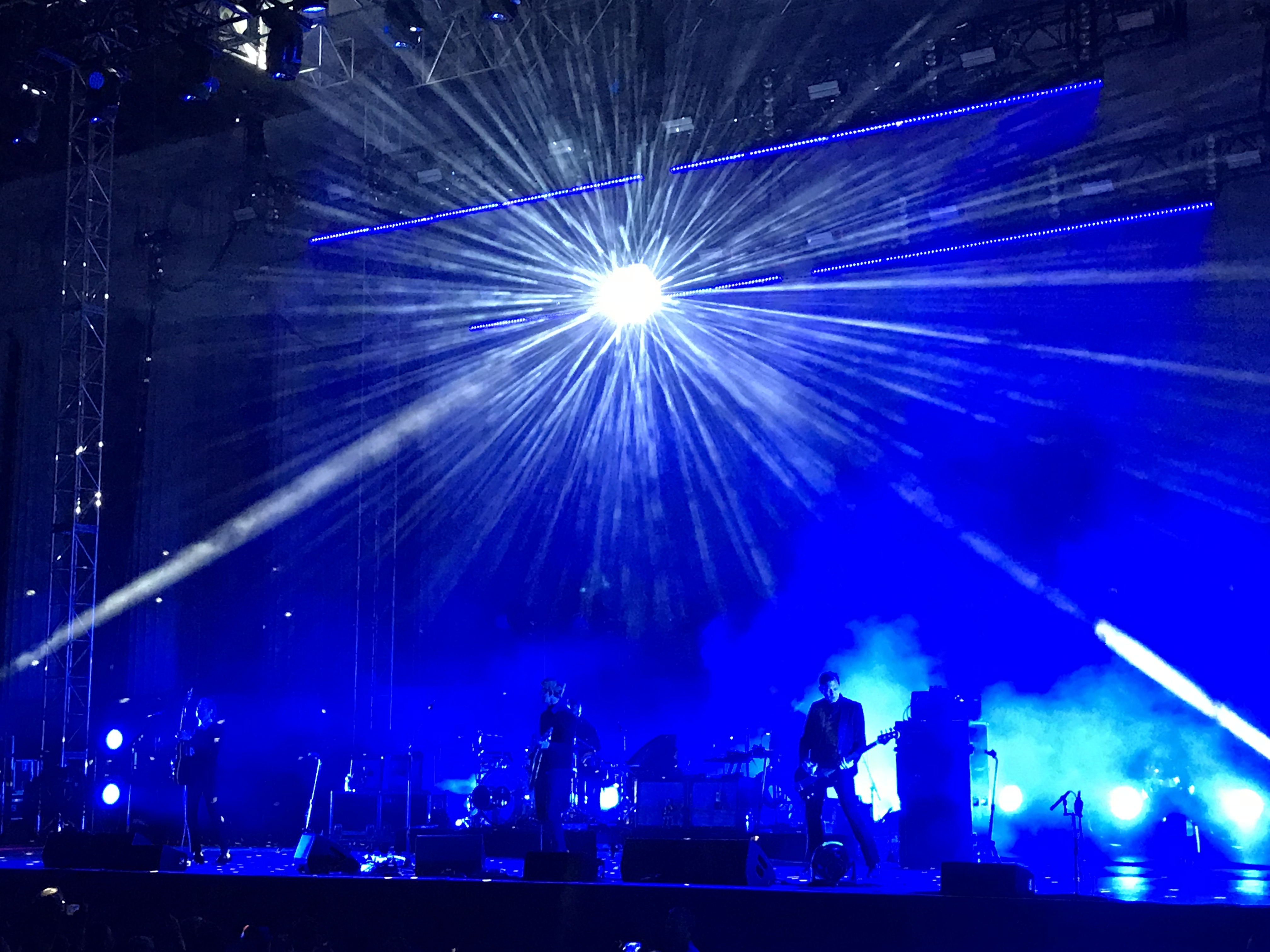 Interpol took a break from writing new material last year to play Turn on the Bright Lights in its entirely for the album’s fifteenth anniversary. That nostalgic energy bled into the completion of Marauder (released in August). The band also worked with a producer for the first time, and a legendary one at that — Mogwai and Flaming Lips guru Dave Fridmann. In spirits of the good ol’ days, the band ditched digital and recorded the album together, on tape.

Interpol’s druggier take on indie-rock remains, though Marauder is their first concept album. All five previous albums have a story behind their title (El Pintor is an anagram of Interpol). This time the title is named after a character that appears in several songs and, according to Banks, represents “the portion of your personality that isn’t really concerned with accountability and just kind of does.”

Heartrates died down during angsty pop tracks like “Public Pervert” (Antics, 2004). But they shot right back up again with funky oldies like “All the Rage Back Home” (El Pintor, 2014). It’s a hair-in-your-face, running man kind of dance number. They kept the party going with banger “The Rover,” their first single off Marauder, and continued to play tracks from all six albums in their catalog. 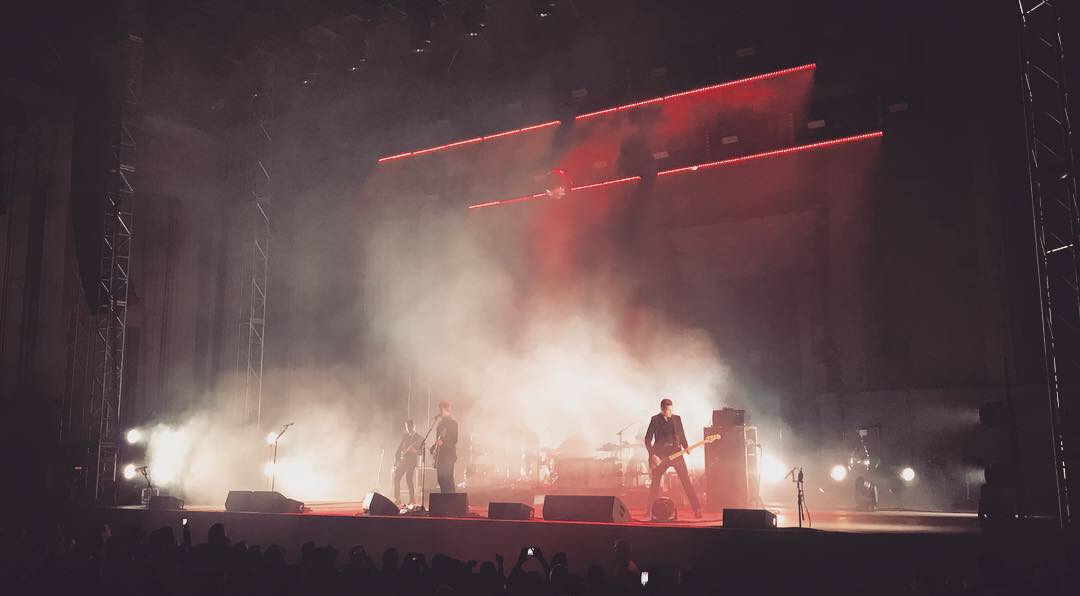 Enamored fans crooned along to “Rest My Chemistry,” one of Interpol’s most famous tracks. But the energy stayed at a consistent seven. That’s the thing. Bands like Interpol don’t go rouge. They don’t need to. They bring bright lights that sting your retinas. They awaken brooding nostalgia. And they offer subtle yet punchy foot-stomping numbers.

After playing “Evil” (Antics, 2004), the band disappeared and let the crowd cheer for more. They closed the night with “Lights,” “Flight of Fancy,” and classic, “Stella Was a Diver and She Was Always Down.”

The Kills, a British-American band, opened the show with a ten-song set worthy of a headlining slot. As if she was possessed by an amalgamation of Mick Jagger, Janice Joplin, and Iggy Pop, singer Alison Mosshart strutted the stage in tight leather pants, a flowy shirt, and ankle-breaking platforms. Whipping her blonde hair and gripping the mic-stand, she belted out tunes like “Kissy Kissy” and “Doing it to Death.” English guitarist Jamie Hince danced beside her, but it was Moss’ unhinged energy that demanded our attention.

Before forming The Kills in 2001, Mosshart fronted Discount, a punk band from Florida, and Hince was in a few British rock bands. They met in London, where Hince gifted her a four-track tape recorder and encouraged her to write music. The two exchanged ideas by sending each other tapes and eventually named themselves The Kills because it “sounded like a band that could exist in any decade.”

They’re inspired by some of the greats — PJ Harvey, Sonic Youth, and Fugazi (to name a few) — and their sound is timeless. You couldn’t take your eyes off Mosshart; she convulsed, sang, and smirked at the crowd. She was beautifully fierce, and her stamina came at just the right time. The Kills took the stage just hours after Brett Kavanaugh was sworn in as an Associate Justice of the Supreme Court. The same week that the President of the United States mocked a victim of sexual assault and the same day women across the country felt defeated and unheard. Mosshart’s presence embodied the beauty and power that is being a woman — one that speaks her truth, expresses herself without apology, and claims her space.

Setlist: Interlude 2 I Pioneer to the Falls I If You Really Love Nothing I Roland I Public Pervert I All the Rage Back Home I NYC I The Rover I Leif Erikson I Not Even Jail I Number 10 I Rest My Chemistry I Slow Hands I Take You on a Cruise I NYSMAW I Evil II Encore II Lights I Flight of Fancy I Stella Was a Diver and She Was Always Down

Setlist: Heart of a Dog I U.R.A. Fever I Kissy Kissy I Hard Habit to Break/ Hand I Black Balloon I Baby Says I Doing it to Death I List of Demands (Reparations) (Saul Williams cover) I Pots and Pans I Monkey 23

Learn more about The Kills on their here.