Pioneering Industrialist husband and wife duo Sascha Konietzko (vocals, synths), and Lucia Cifarelli (vocals, effects) delivered a heart pounding set at the Regency a few weeks ago, bringing their fantastic light show and unique costumes and sound with them for their HELL YEAH tour. 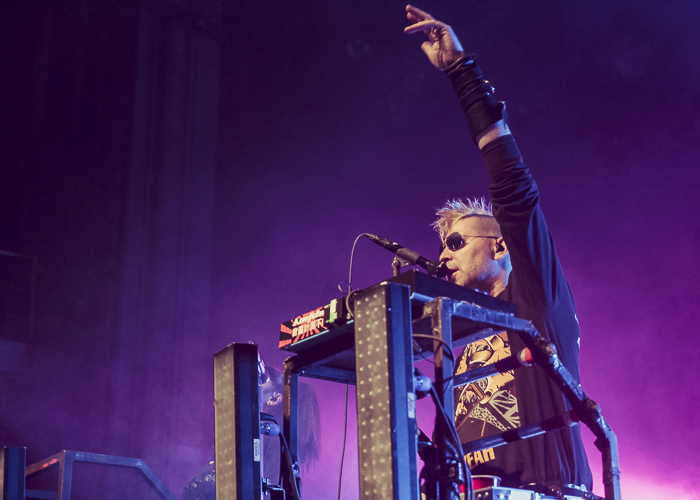 Hell Yeah is KMFDM’s 20th album, and, considering the longevity of the band, they have not relented in terms of angry political commentary, and hard hitting beats. 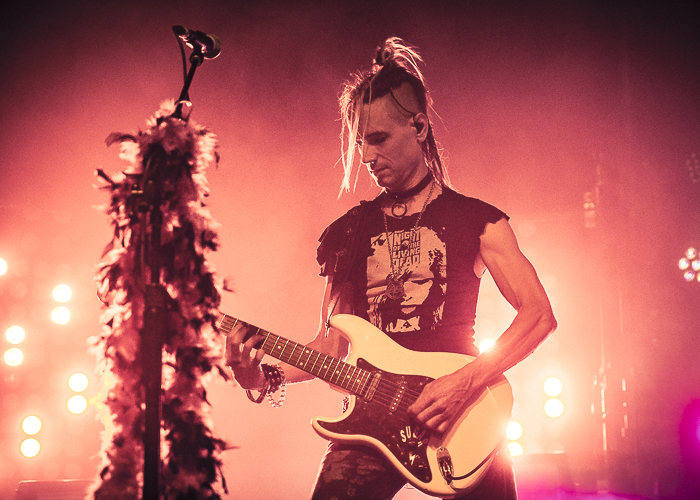 Originally formed by Konietzko in Paris circa 1984 as a performing arts project, KMFDM or Kein Mehrheit Für Die Mitleid, loosely translated from German by the band as “no pity for the majority,” has brought their critically acclaimed and politically charged music to industrial, punk, and metal music fans worldwide. KMFDM delivers their heavily synthesized music with in your face lyrics like “Your government hates you” (from the song “Total State Machine”), and the more light-hearted “Fiercely in control, let your animal out” (from the song “Let Your Animal Out”) with unparalleled style. 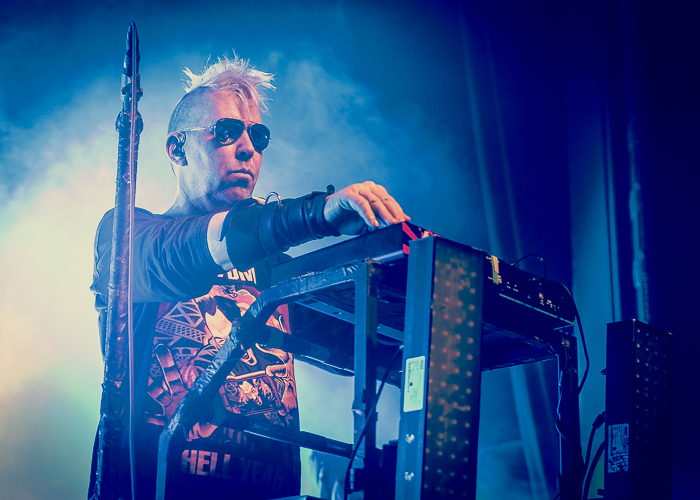 In late 1989 KMFDM crossed the Atlantic from Germany and found a following by touring with Ministry, and their timing was ideal. Industrial music was hitting its peak in the U.S. with bands like Nine Inch Nails, My Life with the Thrill Kill Kult, and The Revolting Cocks; laying the foundation for bands such as RAMMSTEIN and Combichrist world-wide. The line-up at this time included German drummer En Esch (of Slick Idiot and PIG) and Raymond Watts (PIG) who have played with KMFDM off and on since the beginning. 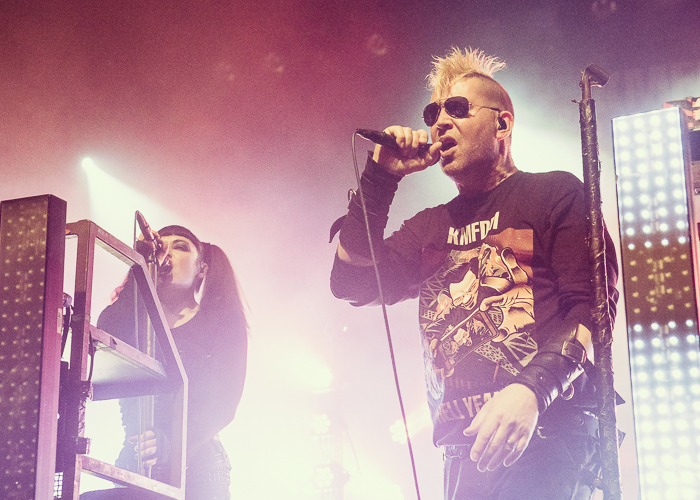 Lucia Cifarelli (vocals) joined Marilyn Manson’s guitarist Tim Skold and Sascha in the reboot of KMFDM in 2001, releasing their twelfth studio album Attak in March 2002, and upon marrying Sascha in 2005, has been collaborating with KMFDM ever since. 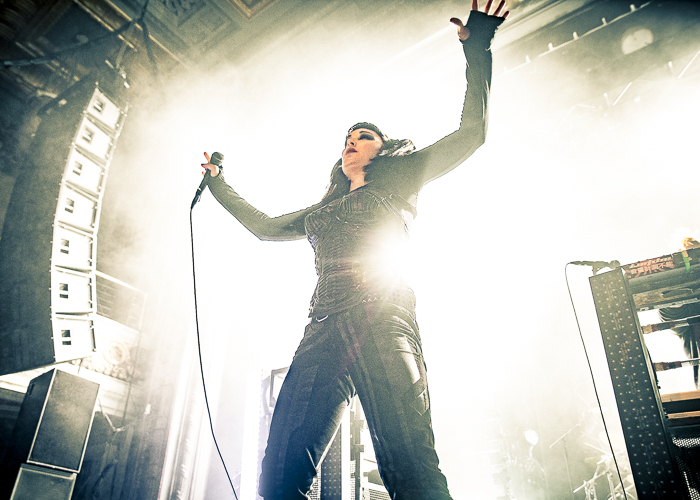 Dark dramatic lighting and heavy smoke set the tone for this show at San Francisco’s Regency Ballroom, as Sascha, Lucia and crew hit the stage. The duo sing as they play their instrumental sound towers on stage, but don’t permanently affix themselves behind the towers, which makes the show extra-ordinarily entertaining; both interacting with the audience in different ways; Sascha pounding the bottom line lyrics down, and Lucia dancing in trance like lighting, clad in a tight black leather bodice and three inch black platform boots, hitting those epic high notes. 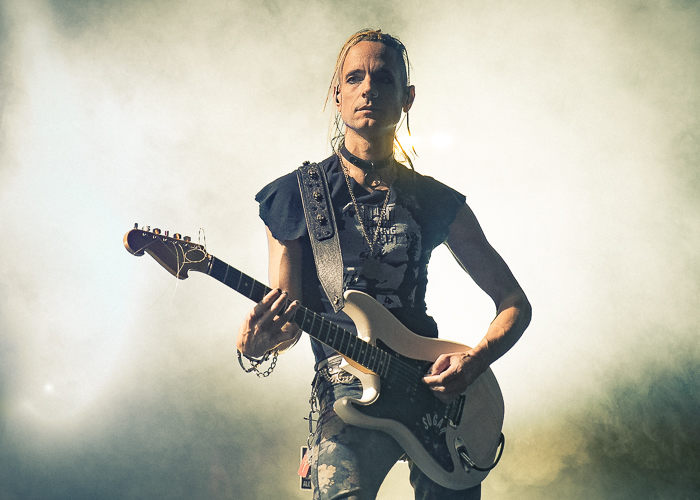 Drummer and long term KMFDM member Andy Selway tends to hide in smoke and shadows, but his presence is felt strongly with each vibrant, yet heavy beat. Ambient soundmaster and guitarist Andee Blacksugar (Blacksugar Transmission, Peter Murphy) was added into the HELL YEAH tour mix just prior to their departure from Europe due to visa issues with the previous guitarist, and brought his own incredible twist to the iconic KMFDM songs. 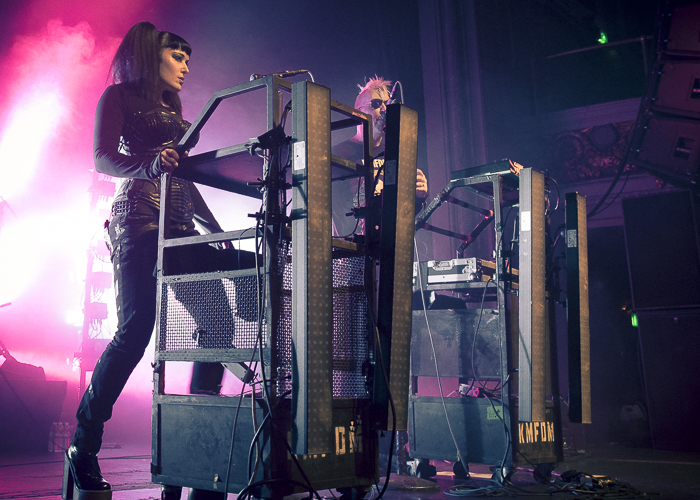 The encores for this evening’s sets, of course, comprised a few of their most popular tunes; complete with a slayerific mix of the band’s 12 “ release Godlike and 2005’s Hau Ruck.