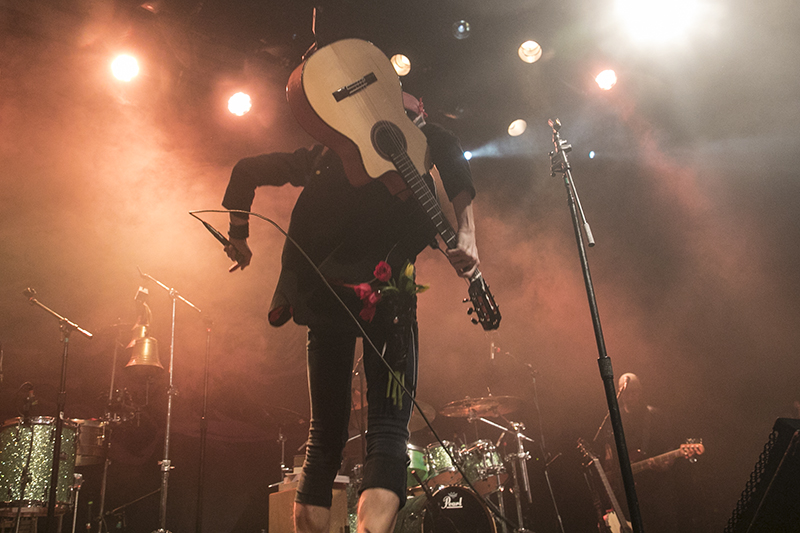 The gypsy punk band radiates an anarchist energy – they’re rebellious and revolutionary by nature. After dropping their latest record, Seekers & Finders late last year, the band hit the road, playing the first of two sold-out gigs at The Fillmore in San Francisco on Feb. 27. The crowd went absolutely nuts. 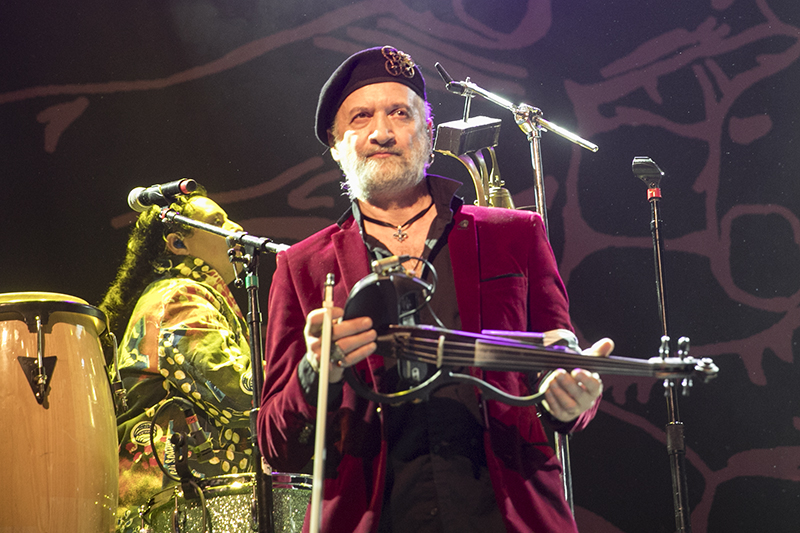 Gogol Bordello is more than a band – it’s an experience. Perched atop a speaker with his guitar strapped across his back, frontman Eugene Hütz swigged from a bottle, hurling his arms over the audience and dousing them in red wine. Following Hütz’s lead, fans spit water and beer into the air and joined in the spontaneous chaos unfolding before them. Hippies spun in circles, a giant pit flooded the floor, people clapped, danced, and screamed with gusto. The set initiated an addictive sense of freedom that didn’t cease for two hours. 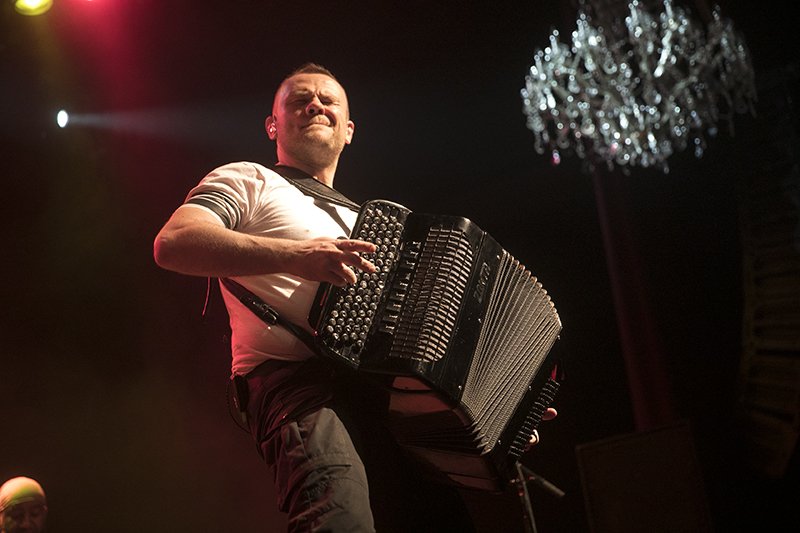 No two Gogol Bordello shows are never the same. Hütz writes the setlist five minutes before show time and is always ready to improvise with his bandmates – immigrants who hail from the Ukraine, Ecuador, Russia, and Ethiopia. 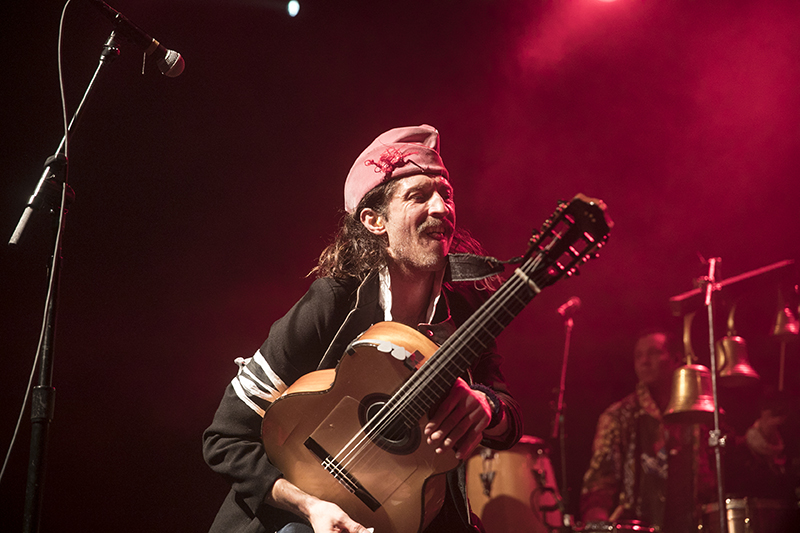 The new stuff is loyal to their Eastern European gypsy punk roots – the crowd ate up “Saboteur Blues,” and “Break into Your Higher Self” off their latest album, Seekers & Finders. Openers Lucky Chops also joined in and played new track, “Walking on the Burning Coal.” The NYC-bred brass band added to the already insane, sweaty energy. Gogol guitarist Boris Pelekh attacked his instrument mid stage while Hütz squatted and shouted over the crowd. Sergey Ryabtsev vigorously bowed his violin, and a head-banging Ashley Tobias sang backup and punched the air to the beat. That performance embodied everything Gogol Bordello is about – being free and feeling alive. 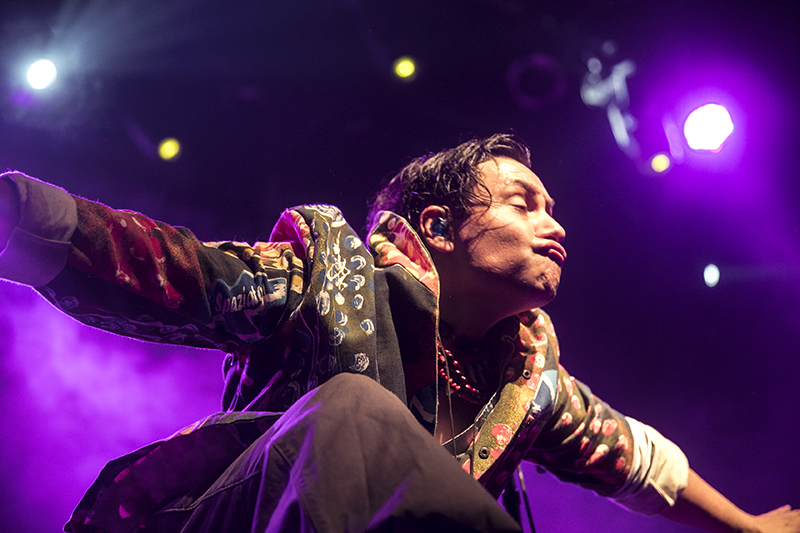 Gogol Bordello formed nearly twenty years ago in a Bulgarian bar in New York City. The band’s sound was initially inspired by Hütz’s Roma/Ukrainian heritage. He and his family fled the Iron Curtain and were one of the last hundred people who were granted refugee status. They sought asylum in various Eastern European countries before coming to America when Hütz was a teenager. Because you could only leave Russia with $400, he brought 20 records and two guitars. The rest is history. 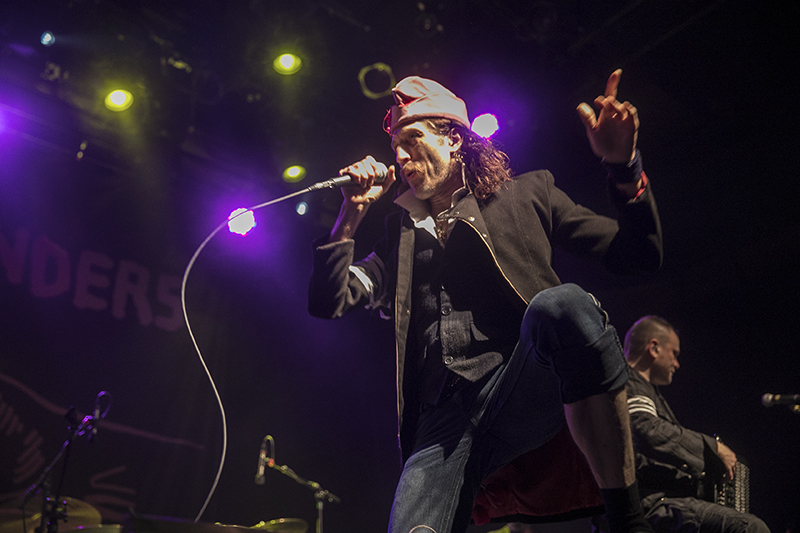 An avid supporter of Romani rights, Gogol Bordello introduced gypsy culture to the masses. But the band is made up of immigrants from all ages, genders, and nationalities who craft “rebel music” for outsiders all over the world. Today, Gogol Bordello consists of Hütz on acoustic guitar, keyboards, percussion, and lead vocals, Ryabtsev on violin, Tobias on percussion and dance, Pelekh on guitar, Thomas Gobena on bass, Pedros Erazo on percussion, charango, and marimba, Alfredo Ortiz on drums, and Pasha Newmer on accordion. Almost all members also sing backup. 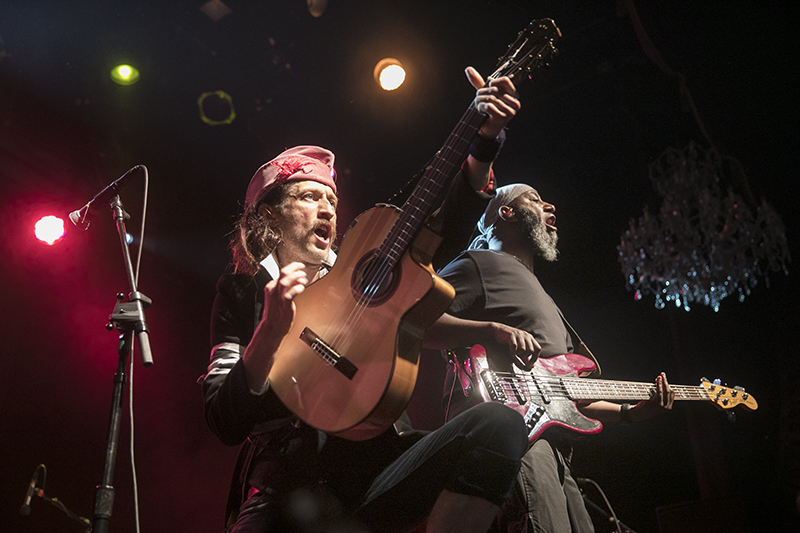 We need music like this now more than ever. Just this week federal officials arrested more than 150 undocumented immigrants in Northern California, countering local sanctuary laws and prompting alarm from community activists who oppose the president’s inhumane approach to immigration policy.

“Be a Donald Trump or be an anarchist.” 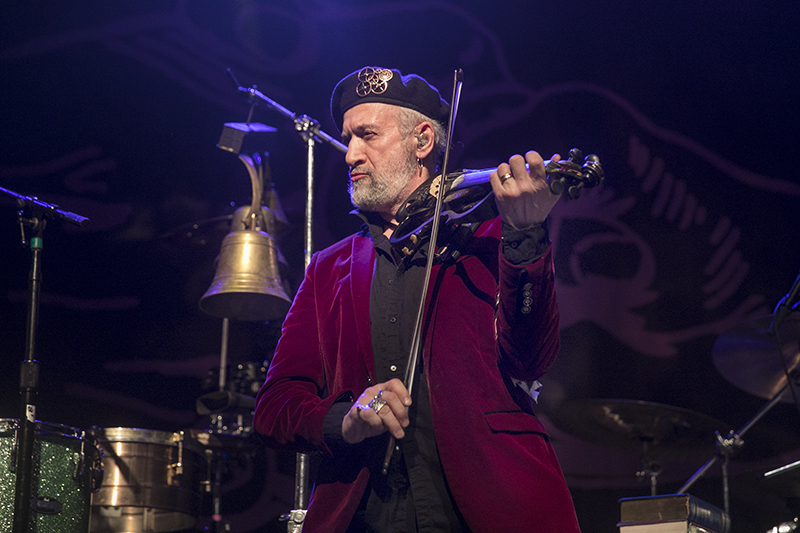 Hütz wrote that “American Wedding” lyric more than a decade ago. He’s always been a little before his time and yet he elicits the spirit of old-time rock ‘n’ roll. He’s for the fans who are too young to have seen Iggy in his heyday or old enough to miss that stamina on stage. The lyrics, the performance, and the sound is meant to trigger emotion and inspire action. 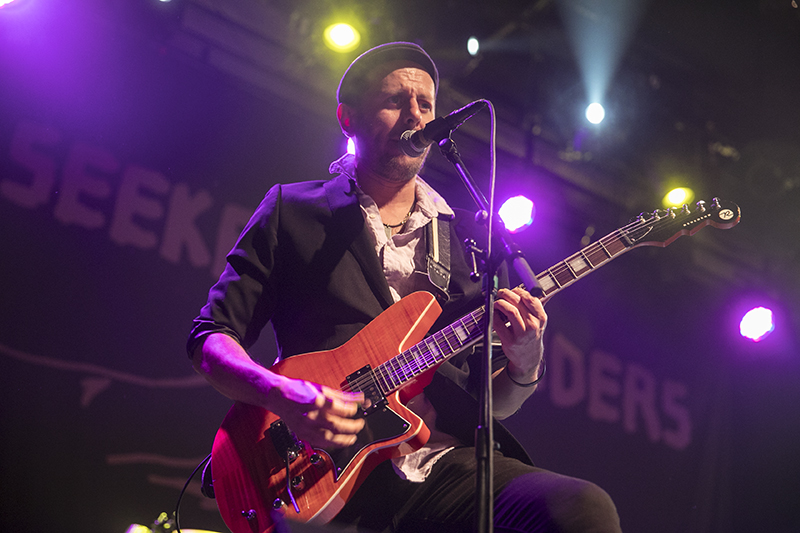 During the spirited, two-hour set, Gogol Bordello played tracks from every record, including “Passport” off the 2002 album Voi-La Intruder, “Hieroglyph” off the 2013 album Pura Vida Conspiracy, and a slew of songs from their 2005 album, Gypsy Punks: Underdog World… Oldie “Not a Crime” inspired a mutiny and “Sally” got the diverse crowd to connect. They also played “Rebellious Love” and the title track off their 2010 album, Trans-Continental Hustle. 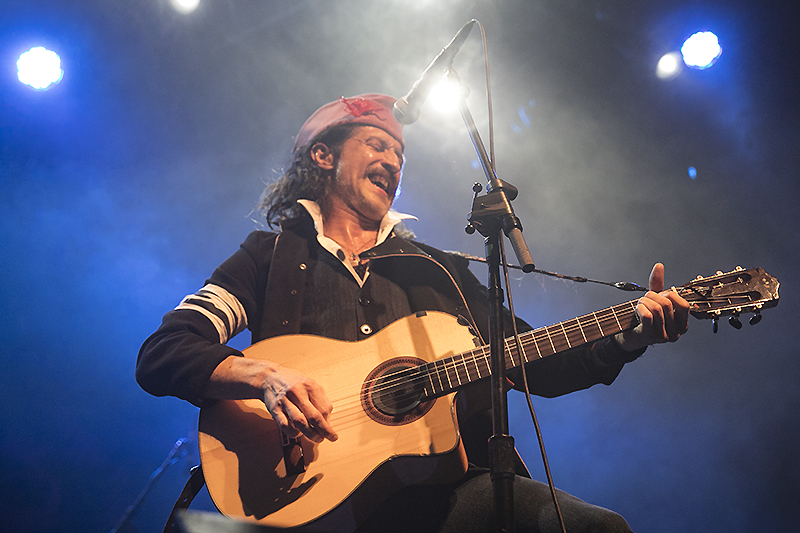 By the time Hütz started talking about the song Chuck Berry, Little Richard, and Elvis Presley all tried to master, the crowd calmed with anticipation but quickly went buck-wild at the start of “Start Wearing Purple.” The intensity didn’t stop there. Purple lovers everywhere kept pitting, dancing, and screaming as the band quickly jumped into “Wonderlust King” off their 2007 album Super Taranta! The intensity never stops, really. There’s an ebb and flow to the madness, but no pause – just a party. 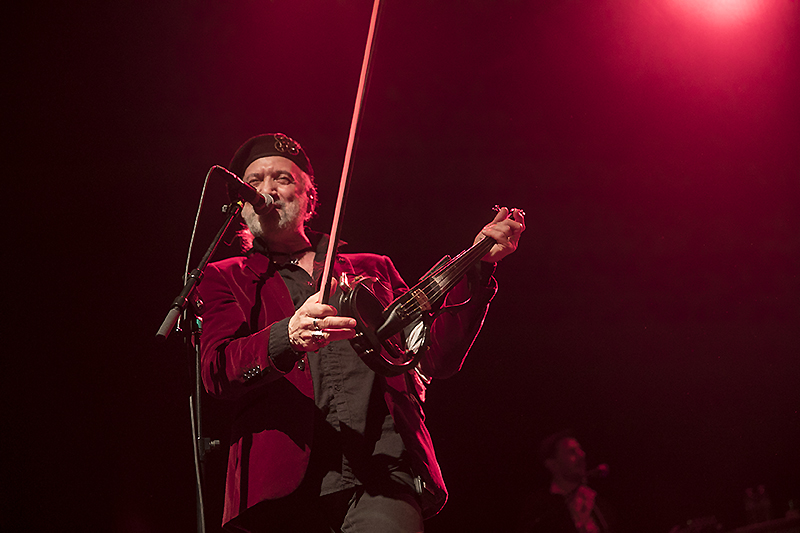 One of the best performances included “My Companjera” off their 2010 album My Companjera – Gogol Bordello and “Baro Foro” off their 2002 album Multi Kontra Culti vs Irony. And Super Taranta! hits ““Alcohol” and “Ultimate” inspired a nutty kind of nostalgia only prevalent at a Gogol Bordello gig. Closing the show, the house lights stayed low, but the crowd begged for more. Chanting and kicking the ground in unison, the floor shook for minutes before a disco ball illuminated the room and the band reemerged. 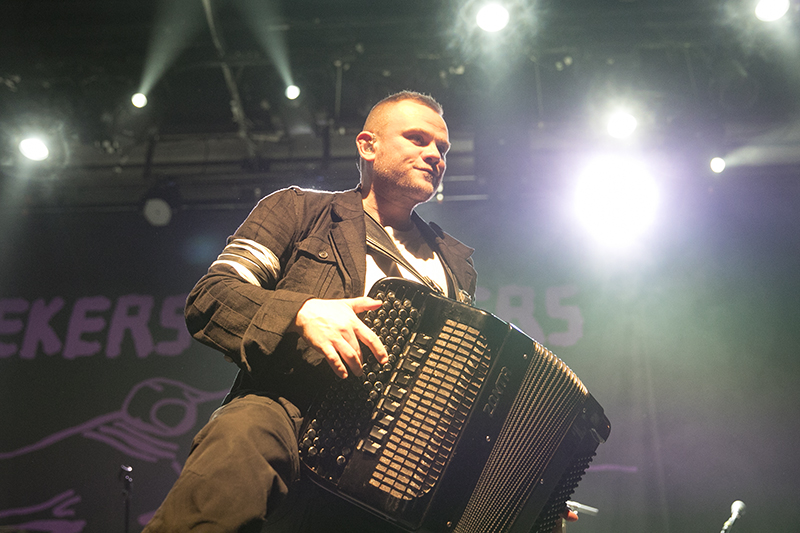 Coming back with new ones – “Familia Bonfireball” and “Sun on My Side” – it seemed to act as the calm before the storm. The band closed the night with a powerful rendition of the Gypsy Punks: Underdog World… hit, “Think Locally, Fuck Globally.” 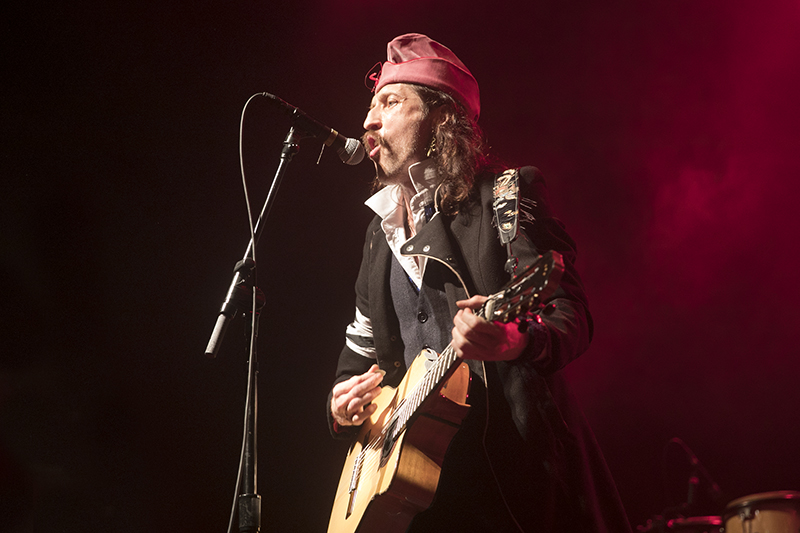 If you’ve never experienced the insanity of a Gogol Bordello show, you should. Jump in the ocean of sweaty bodies slamming into each other. Or dance in circles. Or smile, kick the floor, and throw your fists up. Everyone deserves to join the party once in their life. 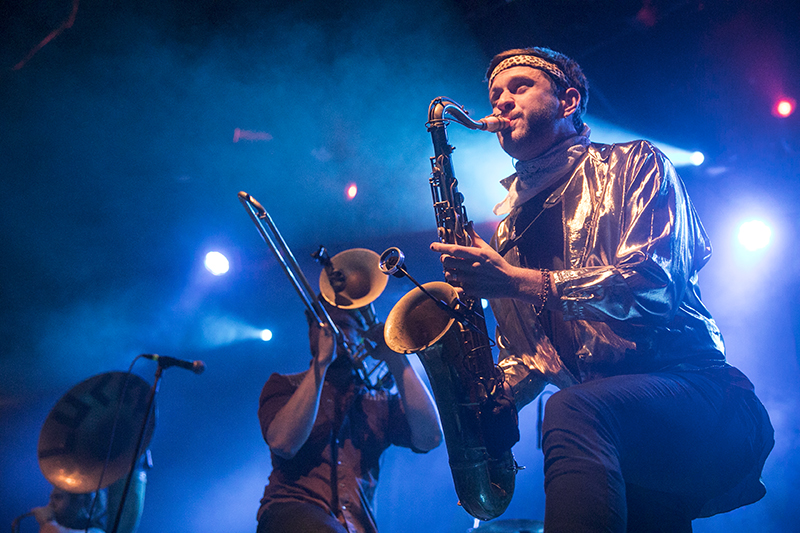 Jazzy-funk openers Lucky Chops were also super fun, energetic, and set the mood for the entire evening. The band consists of Josh Holcomb on trombone, Daro Behroozi on tenor saxophone, Charles Sams on drums, Joshua Gawel on trumpet, and Raphael Buyo on sousaphone. Just a bunch of kids at LaGuardia High School, the band started playing nationally after a tourist shot a video of them playing in the subway, which went viral.

Setlist: Break Into Your Higher Self I Not a Crime I Ultimate I Saboteur Blues I My Companjera I Alcohol I Rebellious Love I Walking on the Burning Coal I Love Gangsters I Trans-Continental Hustle I Passport I Hieroglyph I Baro Foro I Start Wearing Purple I Wonderlust King I Sally II Encore II Familia Bonfireball I Sun is on my Side I Think Locally, Fuck Globally

For more information on Gogol Bordello, check out their website.