Typically the only birds sighted at AT&T Park are the scores of pigeons that descend upon the stadium around the eighth inning of a Giants game, looking to take whatever scraps remain from the departing crowd. On this evening instead of looking to avoid the birds at AT&T, an admiring crowd came 40,000 strong because of the birds….in this case to see the legendary Eagles. 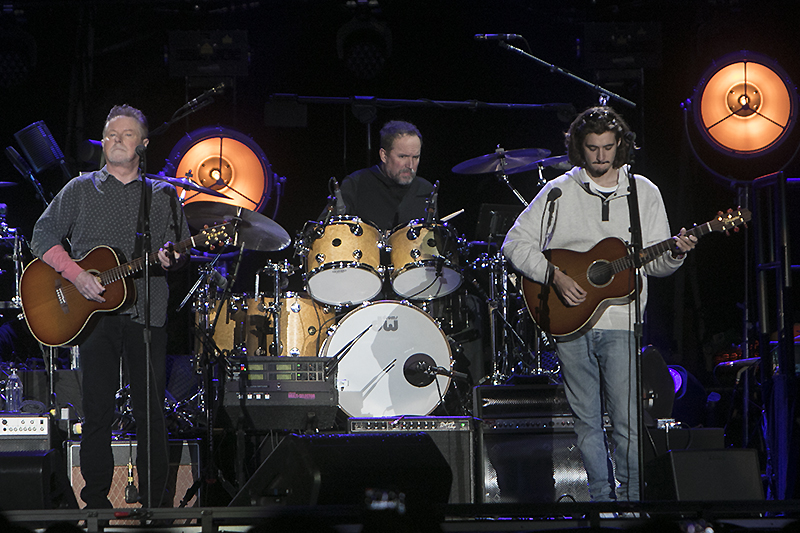 Playing against the backdrop of a very pleasant next-to-last evening of summer in San Francisco, the Eagles put an exclamation point on a fabulous day of music which also saw the Zac Brown Band and the Bay’s own Doobie Brothers grace the stage. 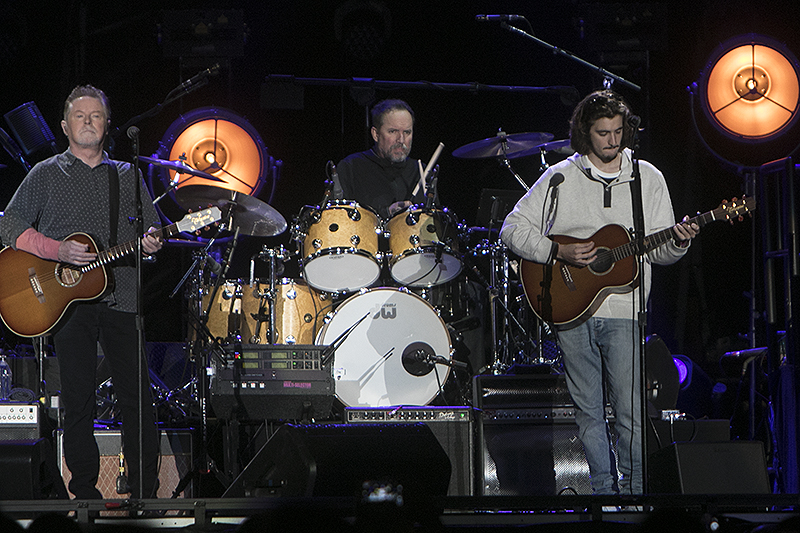 Given that the bill reflected the Eagles – a little bit country and a little bit rock ‘n’ roll – the crowd followed suit, but with a diversity amongst that niche that is uniquely San Francisco. There were MAGA hats and Megadeth shirts. There were lesbians dancing next to cowboys actually wearing Dallas Cowboys shirts. It all seemed to work, save for a couple of fights that I saw break out near me…..both which featured girls fighting…been to a ton of metal and hardcore shows and not many if any fights….go figure. 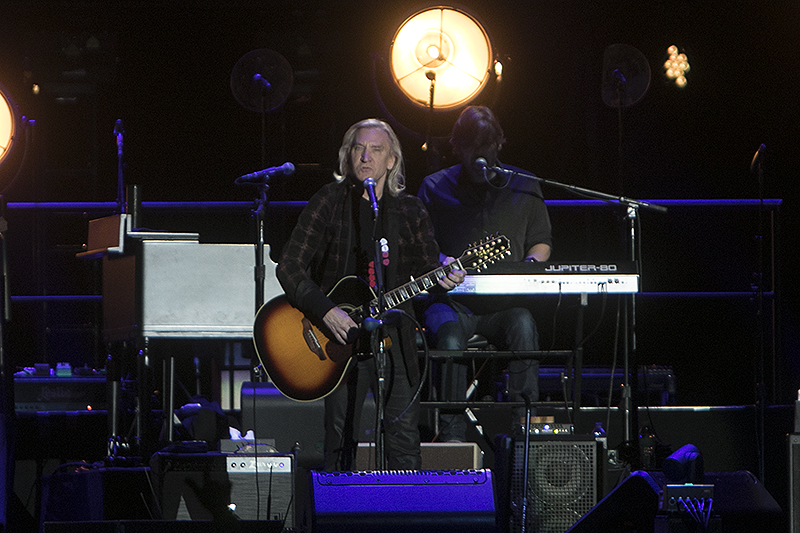 As night began to fall, the 2018 version of the Rock ‘n’ Roll Hall of Fame band took to the stage. This incarnation of the Eagles has a bit of a different look to it, and with that a whole lot of curiosity. The legacy of the band was well represented with founding Eagle Don Henley flanked by core early members Joe Walsh and Timothy B. Schmidt. But it was a couple of the peripheral ‘new’ stage players that stoked the interest of the fans. 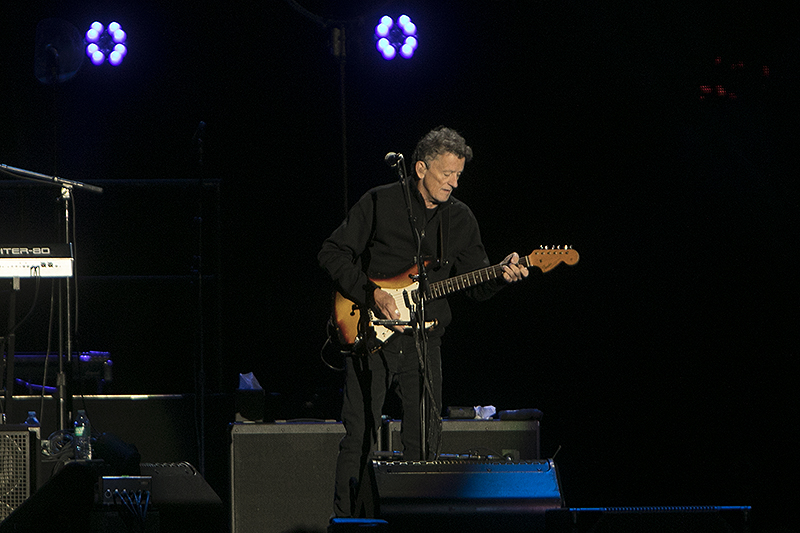 Deacon Frey (son of founding member Glenn Frey), and country star Vince Gill joined the Eagles’ big three as integral components of the night’s performance. From the outset the two ‘newbies’ were front and center onstage, very capably adding their talents to the night’s opener ‘Seven Bridges Road’ as if they were channeling Glenn Frey and Don Felder. 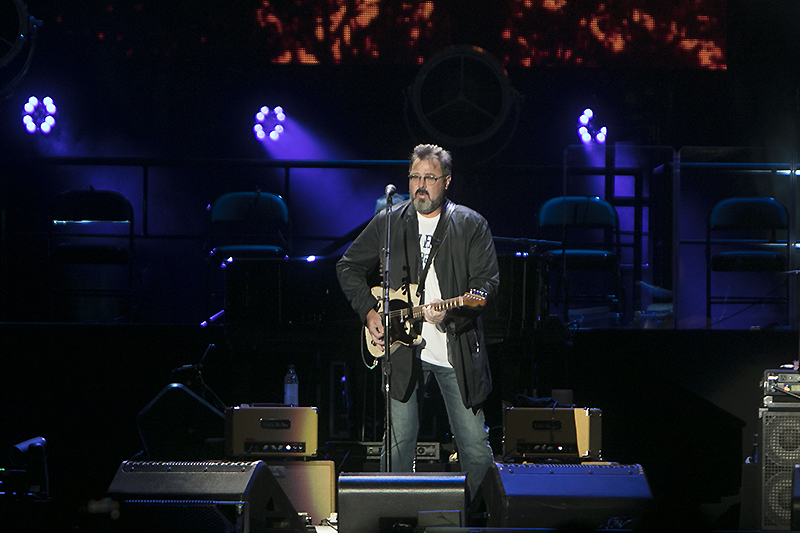 After a slight pause, and a great deal of crowd revelry, Deacon stepped into the spotlight to perform a very heartfelt version of ‘Take It Easy,’ the Eagles’ first hit from back in 1972….originally sung by his dad. Deacon held his own and then some as he crooned the lead vocals and played 12-string while being backed by some of the finest harmonies in rock ‘n’ roll history…..Glenn would be proud. 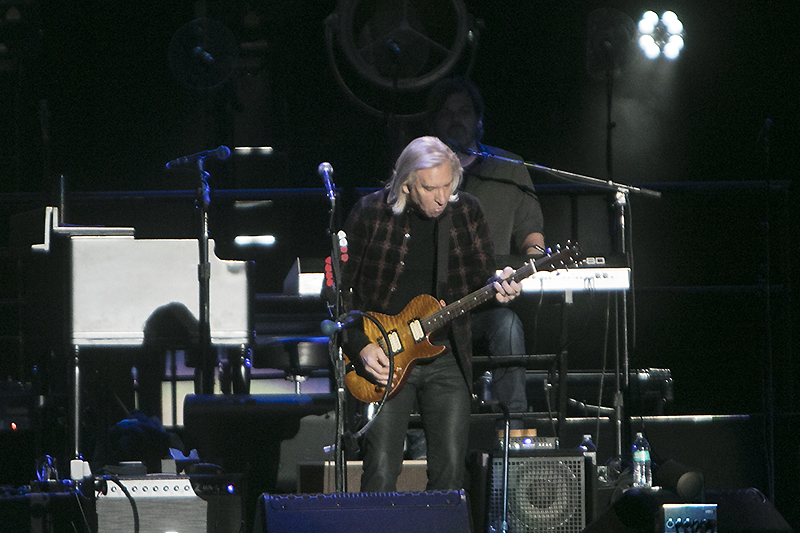 The quality of the performance would not wane from there as the seesaw of wistful country ballads and shiny FM rock tilted back and forth, landing more often than not on the country side due to the presence of Vince Gill. While giving strong performances and generally holding true to ‘Take It to the Limit’ and ‘Tequila Sunrise,’ Gill’s voice offered more twang in the mix, to the delight of the many in the crowd. 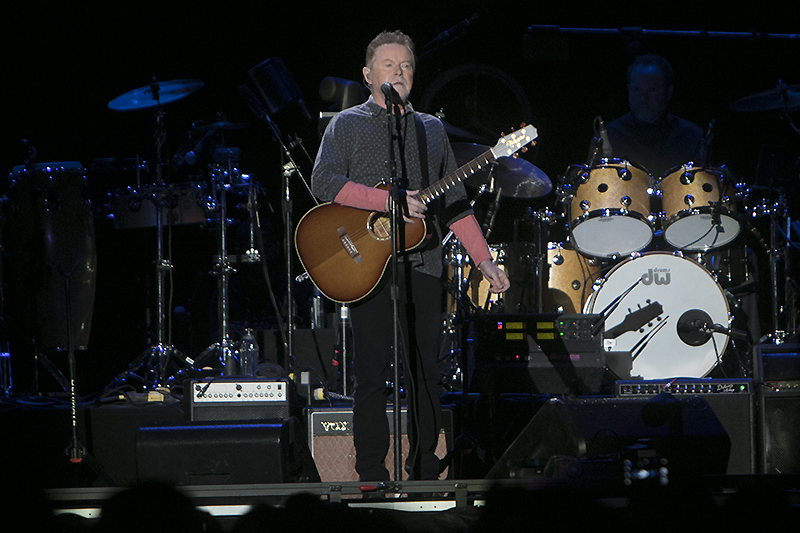 If Gill is the ‘country cousin,’ Joe Walsh is definitely the ‘city cousin,’ bringing the edge to the Eagles’ sound (along with a variety of entertaining facial contortions). With Don Henley taking lead vocals on ‘Witchy Woman’ from behind his kit, Walsh conjured up some screaming dark leads that when intertwined with the horn section brought stadium rock back into the equation. 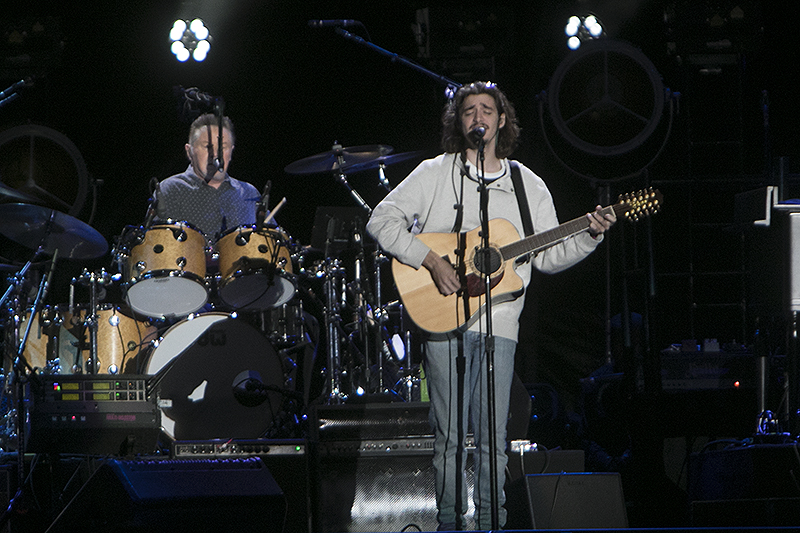 Walsh has always been the oddball of the band, adding an element to the Eagles that would not otherwise be there, and he definitely coaxes the rock side of Henley. The duo also absolutely destroyed the place with a hot version of ’Those Shoes,’ (The Long Run – 1979) causing stumbling drunken bodies to gyrate in the dark. 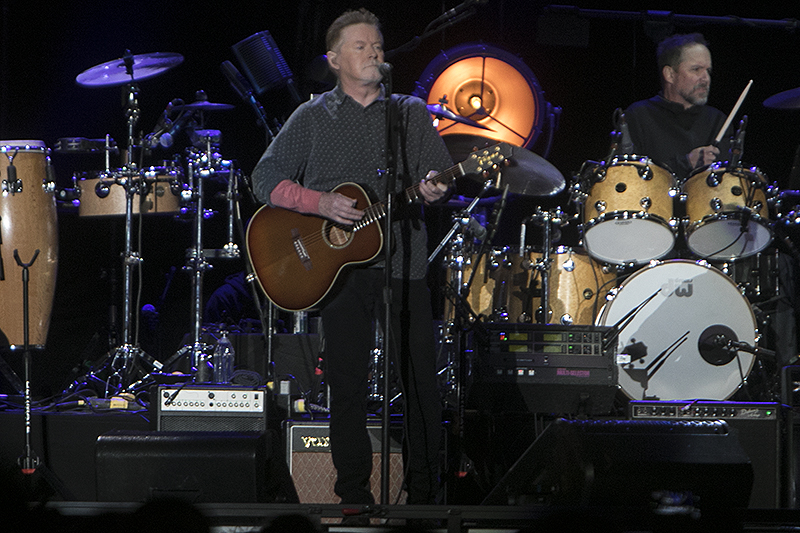 Though the evening could have been fueled solely by Eagles hits, as the set progressed it bounced around to highlight the players’ individual careers.  Whether it was Walsh’s ode “Life’s Been Good,’ Henley’s ‘Boys of Summer,’ Gill’s ‘Don’t Let Our Love Start Slippin’ Away,’ or more debauchery from Walsh with the James Gang’s ‘Funk #49,’ the flurry of rock and country hits fired up the night in a fashion that still reflected the Eagles. 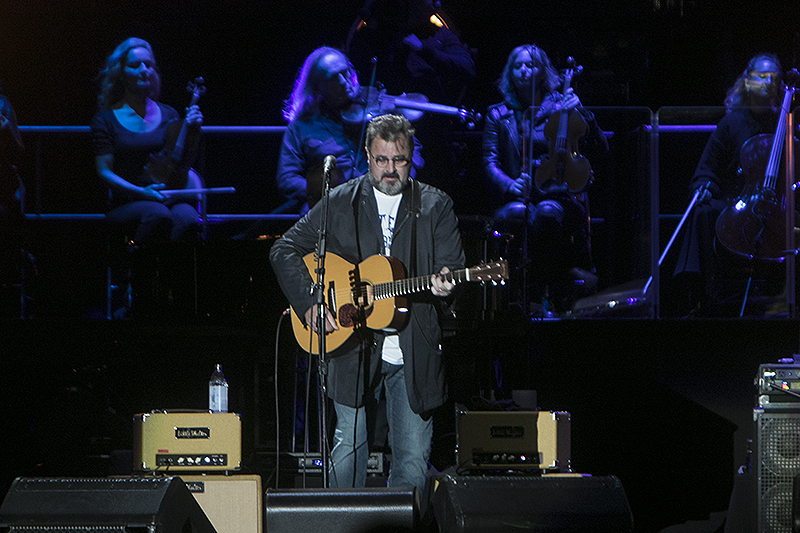 The crowd would have been fully satisfied if the evening would have ended when the band completed its first encore….a sparkling cut of ‘Hotel California’ which was a rousing a sing-along for folks hanging off each other. But after three minutes of ovation, the Eagles returned for a final encore inverting their Hall of Fame recipe to send fans home. First a little bit of rock and roll (Walsh’s ‘Rocky Mountain Way’), before ending by pulling couples together with the soothing country ballad ‘Desperado.’

Though the Eagles were the main attraction, there is no doubt that the two openers contributed their fair share to the magic of the evening. The Zac Brown Band (ZBB), diverting from their tour to join the Eagles for a couple of West Coast shows, put on a headliner worthy set of almost 90 minutes of country-rock originals spiced with a few power-packed covers.

Nattily dressed in a black shirt and vest, and wearing a brown hat, Brown evoked a concerted cheer from the females in the crowd as he and his band walked onstage in the downtown SF twilight.  Out of the blocks ZBB was spinning country gold, and as they started up with ‘Homegrown’ (Jekyll + Hide – 2015), so did the crowd who sang along in unison.

This was just an appetizer for ZBB, with the tastiest morsels oddly enough being the very interesting selection of covers that the band sprinkled throughout the set. Not only were the covers impeccably performed, but they were so disparate that there was no telling where they would go next.

The first ‘Devil Went Down to Georgia’ (Charlie Daniels) immediately energized the crowd, and the next ‘Jolene’ (Ray LaMontagne) dialed it back a bit but was still in the country pocket. The next two however drew many reactions of “no way” from fans as ZBB extended their reach into the realm of rock.

Tearing through ‘Whipping Post’ (Allman Brothers), Brown showcased his guitar prowess, showing he could rock out whenever the mood strikes. But it was the country twang harmonies laid over the top of ‘Bohemian Rhapsody’ (Queen) that was bizarre, beautifully done, and arguably the climax of the ZBB set.

Opening the set with the sun still high in the sky was the bay area’s own Doobie Brothers. It is strange to give a bypassing reference to a band that by all rights should be in the Hall of Fame, but suffice it to say that the Doobie Brothers smoked the early arriving AT&T crowd while the crowd smoked doobies. The double shot of ‘Black Water’ into ‘Long Train Runnin’ was classic Doobies, and worth the price of admission…..summer day sunshine rock on the green.

Find out more about The Eagles on their website.

Get more info about the Zac Brown Band here.

Setlist:  Natural Thing | Rockin’ Down the Highway | Road Angel | South City Midnight Lady | Jesus Is Just Alright {The Art Reynolds Singers cover) | Eyes of Silver | Clear as the Driven Snow | Takin’ It to the Streets | The Doctor | Take Me in Your Arms (Rock Me a Little While) (Kim Weston cover) | Black Water | Long Train Runnin’ | China Grove | Listen to the Music |