It felt like it could have been 1982 when Hall and Oates hit the stage at Sacramento’s Golden 1 Center recently. The new arena was sold out and people were eager to hear, dance, and sing along to all of the band’s big hits, much as it may have been during the tour for their biggest selling album 1982’s H20.. Naturally, the hair and fashions were different, but people were ready to party with the Philadelphia duo and their band on this 2017 night. 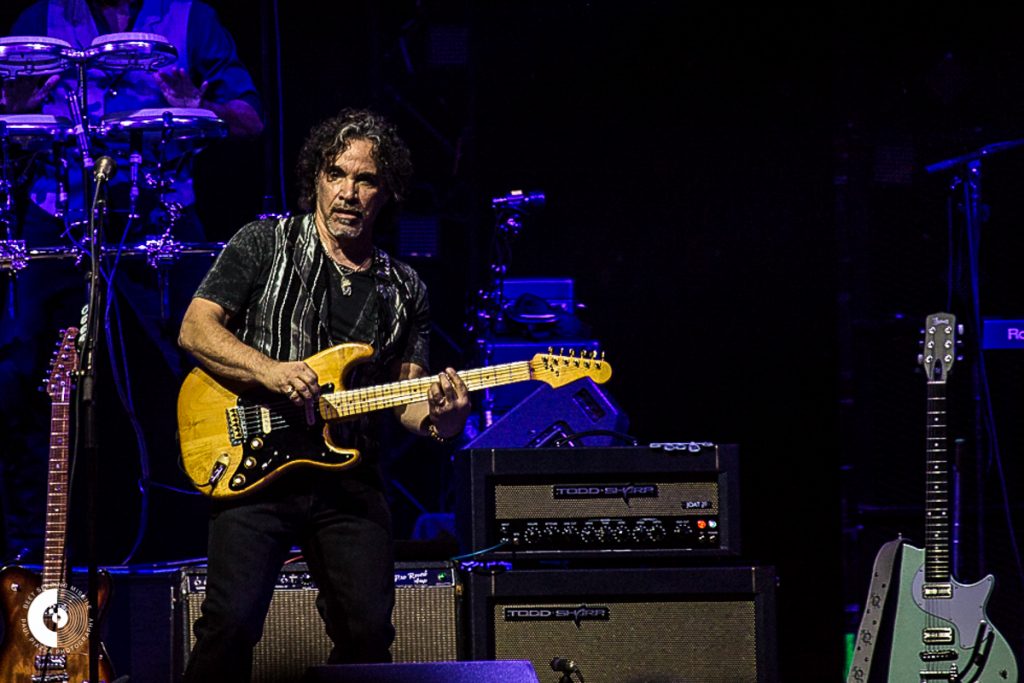 Of course it didn’t hurt that on this evening Hall and Oates were paired up with Tears for Fears, another group of big hit-makers from the 80’s. Also opening was soul singer Allen Stone, an artist from the new millennium.

Hall and Oates have experienced an impressive resurgence lately despite not charting a hit on the radio in years. Part of this is due to the surprising popularity of singer Hall’s Live From Daryl’s House. It’s a clever music show that started as YouTube only and has developed into a show that has been broadcast on Palladia and VH1. The show’s current home is MTV. 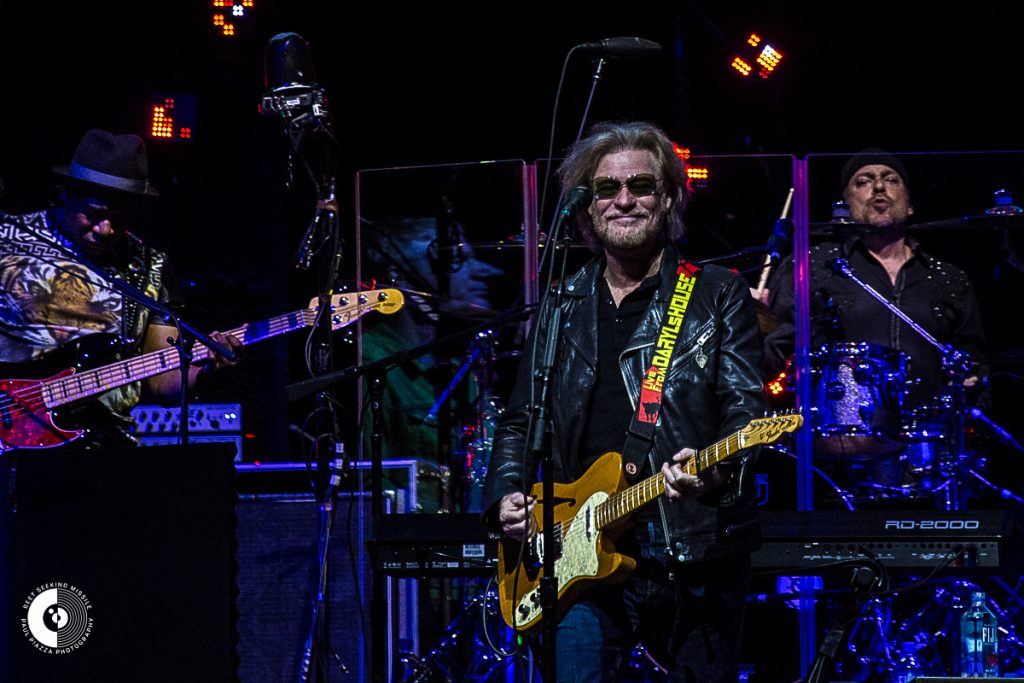 The show provides a performance space for artists that is an alternative to live shows and studio sessions. Hall greets each musical guest and they proceed to collaborate on a couple of Hall and Oates songs to play together as well as some of the visiting artist’s material. Later in the show everyone sits down, drinks wine, and shares musician tales. Guests have ranged from the late Sharon Jones to ZZ Top’s Billy Gibbons to newer artists like Stone, who appeared on the show in 2012.

But live from Sacramento, fans were geared up for all of the hits that have sustained Hall and Oates for over forty years in the music business. There were a variety of vintage t-shirts and looks. The most interesting one may have been a young African-American woman who was sporting a faux Oates moustache. 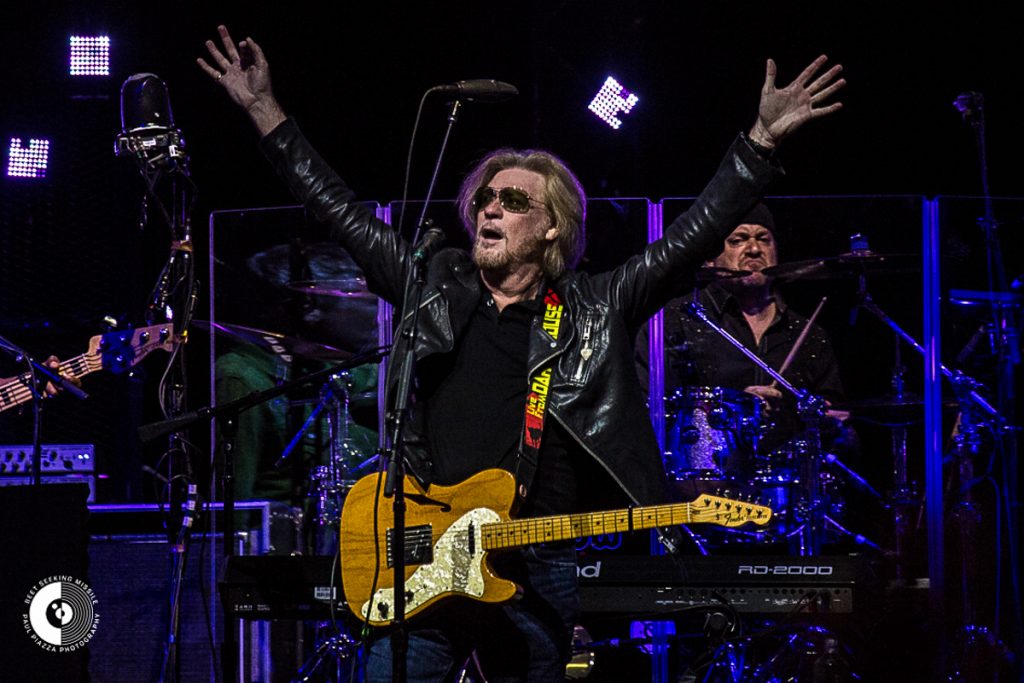 Hall and Oates opened up with “Family Man,” followed by “Maneater,” and “Out of Touch.” Nearly ninety minutes later they were still cranking out the hits, ending the set with “I Can’t Go For That,” in which Hall added some cryptic political commentary about the state of the world today as people shook it to catchy bass hook.

Oates, for his part, remained the steadfast sidekick all night long. He has co-written many of the group’s biggest hits including “Sara Smile,” “She’s Gone,” and “You Make My Dreams.” On this night, he showed off his superb guitar playing skills on more than a few occasions. Although he said little, he had a constant love-fest going on with the audience members. 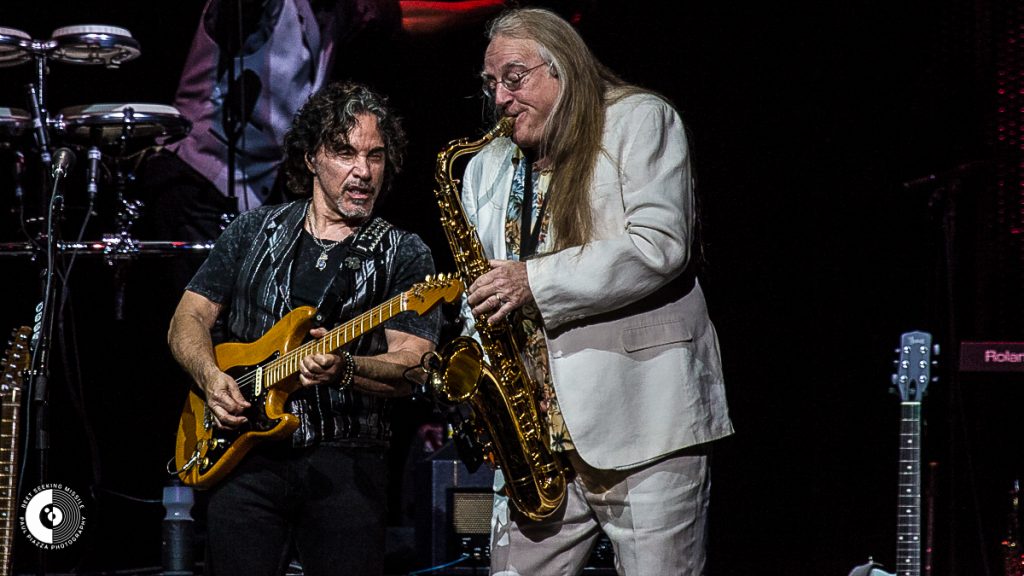 Also onboard for Hall and Oates was the great saxophonist Charlie DeChant, who also plays keyboards, flute, and piano. He is the one responsible for the immortal solos on “Maneater,” “One On One” and “Say It Isn’t So,” among others. Next to the two principals, he is the longest standing member of the group. He has been a member of Hall and Oates since the mid-70s. 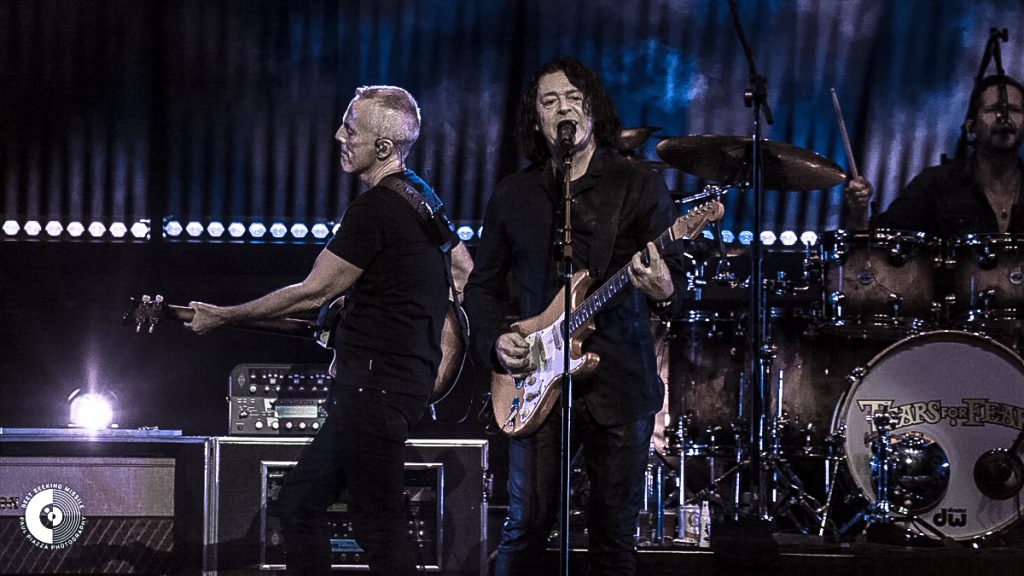 Tears for Fears came out blazing with “Everybody Wants To Rule the World” and powered through a synth and guitar-powered set that featured their most well-known material. Singer-guitarist Roland Orzabal and singer-bassist Curt Smith traded vocals that showcased the band’s often dark and ironic lyrics. They were very well received by the huge crowd who were in a sing-along mood; the closer “Shout” was sung along to the hoisting of many drinks all over the arena. 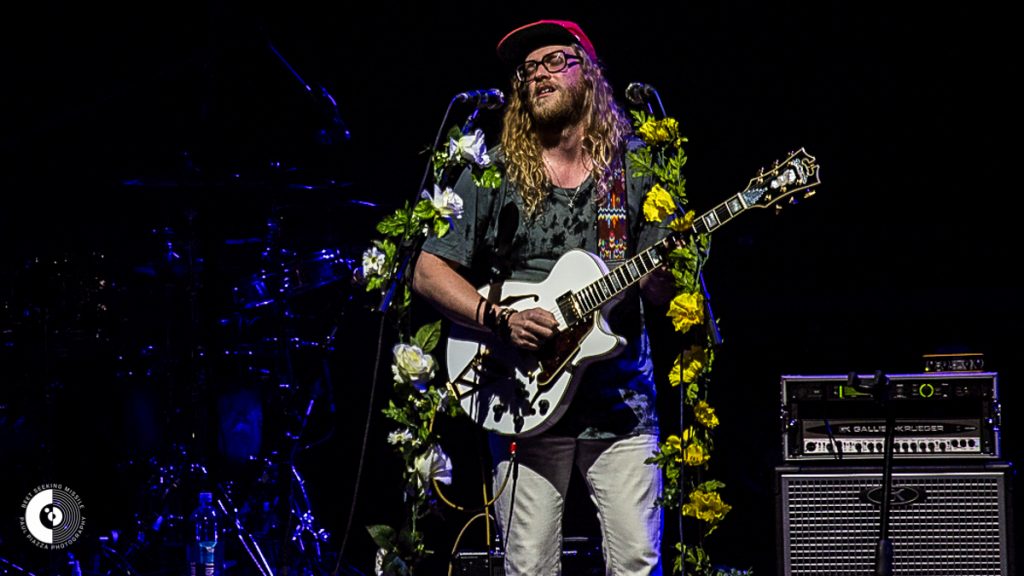 Stone opened solo and played and sang some nice soul-tinged jams on his acoustic guitar. Although, he was allowed only about ten minutes, he made the most of them. The Washington native has released a trio of albums and has grown to the point where he can headline a venue as big as Oakland’s Fox Theater, which he did recently.

However, this night belonged to the big hitmakers and they delivered all the goods. At one point, after a beautiful rendition of “Sarah Smile,” where Hall played grand piano, he mused to the audience, “It’s not about us, it’s all about the songs.”

Find out more about Hall and Oates here.

Setlist: Everybody Wants to Rule the World | Secret World | Sowing the Seeds of Love | Advice for the Young at Heart | Everybody Loves a Happy Ending | Change | Mad World | Memories Fade | Creep (Radiohead cover) | Pale Shelter | Break It Down Again | Head Over Heels || Shout

Learn all about Allen Stone here.