Grace Jones Lands at the Greek
Aug 27, 2015
By Mark Paniagua

Grace Jones descended upon the Greek Theater in Berkeley on Saturday night, landing her space craft long enough to leave a diverse and jovial crowd spellbound in a way that only an inter-stellar superstar like her could. 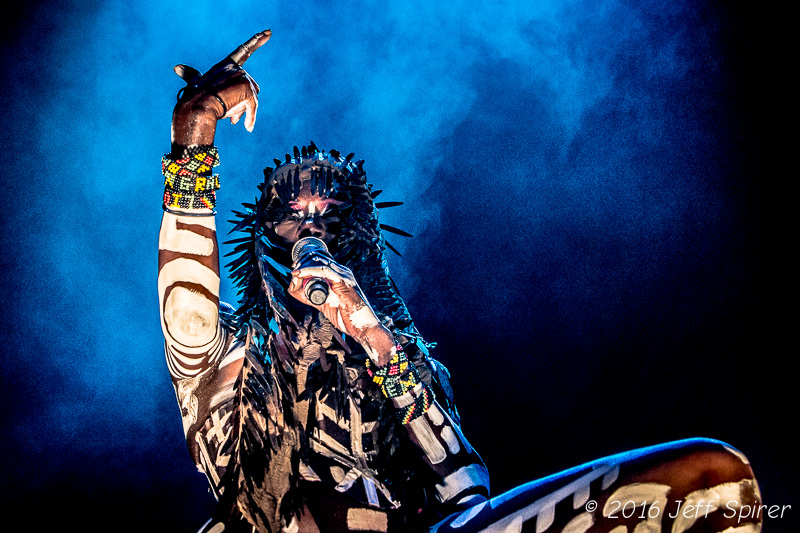 Making a one-off weekend stop in the U.S. (this Bay Area date and the FYF Festival in L.A. were her only appearances in the States before bopping back to Europe), she was loudly welcomed to the venerable Greek by a crowd that was not only represented by every nationality imaginable, but also every color of the LGBTQ rainbow. As the sun set and anticipation of the impending performance grew, so did the fashion parade in the crowd, with many hugs given and even more pictures taken. 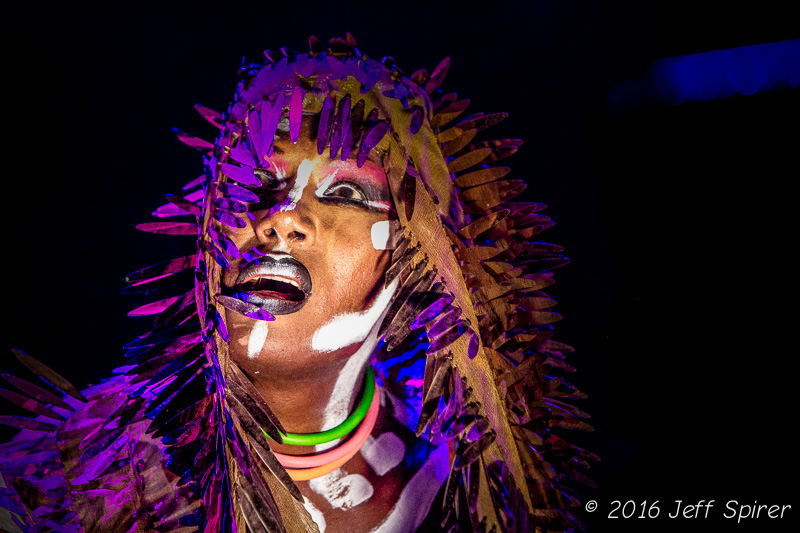 When the 68-year old Jones, who has been on the bleeding edge of fashion, music, and video for over four decades, emerged onstage with her band to the opening hits of the Iggy Pop’s “Night Clubbing” (the first of a handful of covers), the crowd went bananas. She looked and moved fabulously. Where the trend these days for older icons is to be photographed only from afar if at all, Jones flipped that notion on its head by cat walking the front of the stage and playing up to fans and photographers in the front rows. 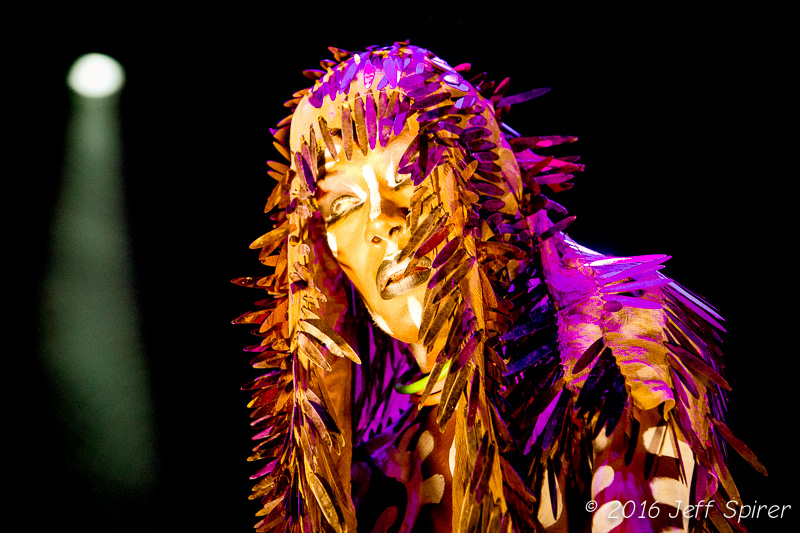 She appeared in a series of extravagantly flashy costumes, all using the base of Jones wearing nothing but body paint, a corset, and a thong. To that she added a brilliant variety of headdresses, hats, skirts, and other accessories that would make current day pop icon fashionistas like Lady Gaga, Rihanna, and Sia envious. 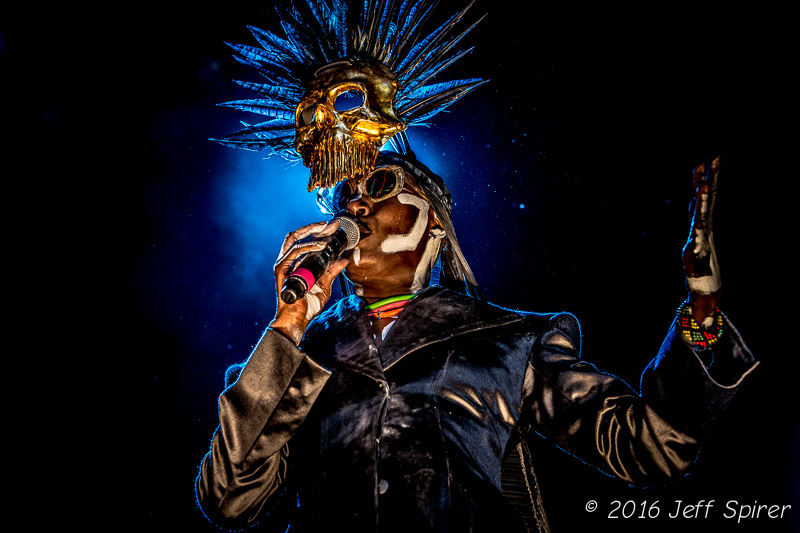 As her set unfolded Jones simply owned the stage, exemplifying her influential style not only in fashion but music as well. Paying homage to what has inspired her career coming up in the wide open music scene of New York City in the seventies, Jones weaved her space goddess spell to break down the words of Chrissie Hynde in her signature sultry monotone croon as her band imparted the dub-styled twist of the Pretenders’ “Private Life.” 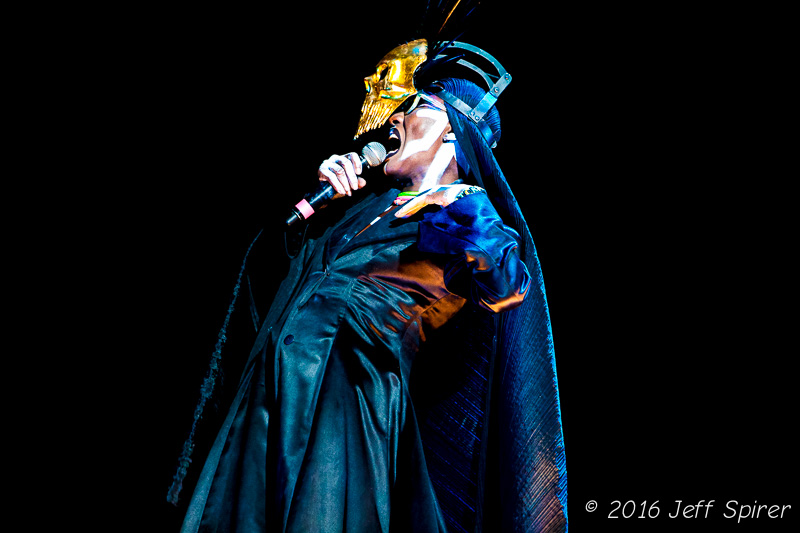 Then as she is apt to do, she turned the tables, showing how she has also impacted and influenced the music of stars that came after her. The performance of the crowd pleaser “My Jamaican Guy” was a flat out house party dancehall slammer, and the movements of the crowd made it evident why LL Cool J ripped this beat for his hip hop hit “Doin’ It.” 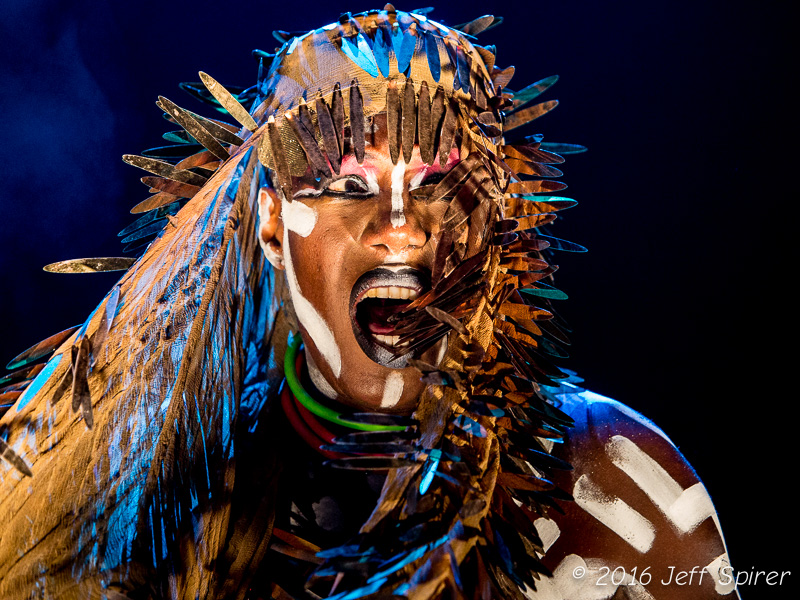 Whether she is doing her own material or putting her fingerprints on the works of others, boundaries seem to melt when Grace Jones is injected in the mix. She went on to encapsulate her revolutionary chameleonic style in a nearly two hour set that blurred the lines between soul, reggae, punk, and what has become known as alternative rock.

She and her band de-constructed and absolutely shredded “Warm Leatherette” (originally by The Normal – 1978) by reconstituting the minimalist avant-garde electro jam into a bump and grind rocker that has hypnotized audiences since she released it in 1980. As another point to how impactful Jones’ career has been, the type of funk/disco/alt-rock on Warm Leatherette was an inspiration to another song that has been hailed a genre buster…..Blondie’s “Rapture” (which was released in 1981). 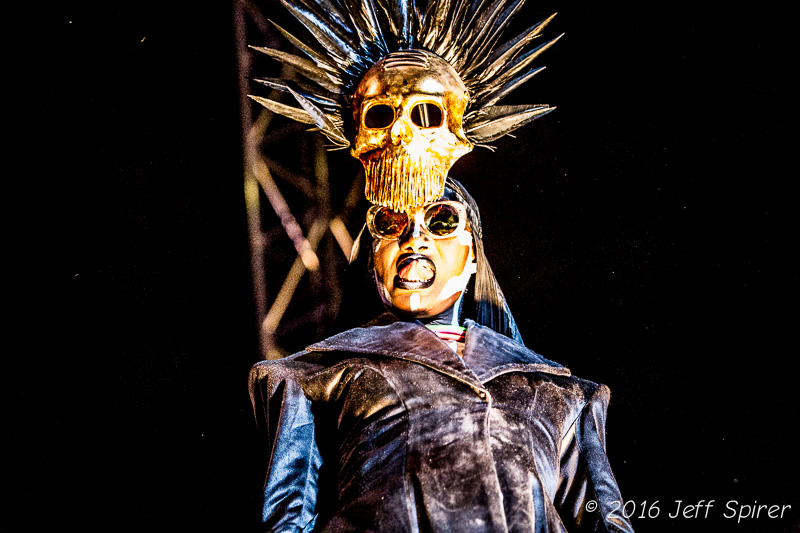 As the set pushed forward, it was apparent that Jones could do no wrong. A frenzy started when she described what we all need to get through in this world…..”LOVE.” She also gave some sage advice telling the audience to “Forget about the ‘falling’ part…….just BE in love….no falling.” She and her band then began a stunning version of the Roxy Music hit “Love Is The Drug” which proved the perfect sedative before ending her regular set on a high with “Pull Up To The Bumper.”

The crowd would have none of this being the end. Calling Jones out for an encore, she showed there were higher heights to this set with the ultra-smooth “Slave to the Rhythm.” Soon the open floor area of the Greek turned into one interconnected organism of motion under the stars. Unfortunately the only thing that could contain Grace Jones on this night was the Berkeley noise ordinance which imposed a stop at 11 pm…..the same time she was conjuring “Hurricane” into the Greek Theater ecosystem.

Opening the evening was a set from the surprisingly good Blood Orange, the current project of London’s Dev Hynes (aka Lightspeed Champion). From just a listen to the recordings, Blood Orange comes across as a very ‘produced’ band that is biting the 80’s style and sound that originally emerged from Minneapolis with Prince, The Time, Jesse Johnson’s Revue, and the production of Terry Lewis and Jimmy Jam.

However it is much more potent in a live setting, as it becomes more apparent that this is an original band rooted to retro 80’s soul and R&B however adding an original spice of rock and an electronica vibe. Supporting his third album “Freetown Sounds” which was released earlier this year, the 30-year old Hynes at times evoked the sounds and images of Terrence Trend D’Arby, Michael Jackson, and Prince, but put his own imprint on those influences to create his own vibe and rapport with the crowd. It will be interesting to see how his career arcs, as he had many in the crown moving and singing his songs.

For more information about Grace Jones, see her Facebook page.

Find out more about Blood Orange on his website.