The height of music injected with psychedelia happened in the mid-1960s. Many bands took advantage of the studio to create colorful soundscapes with whirling, swirling guitars, cherry flavored lyrics, and narcotic energy. 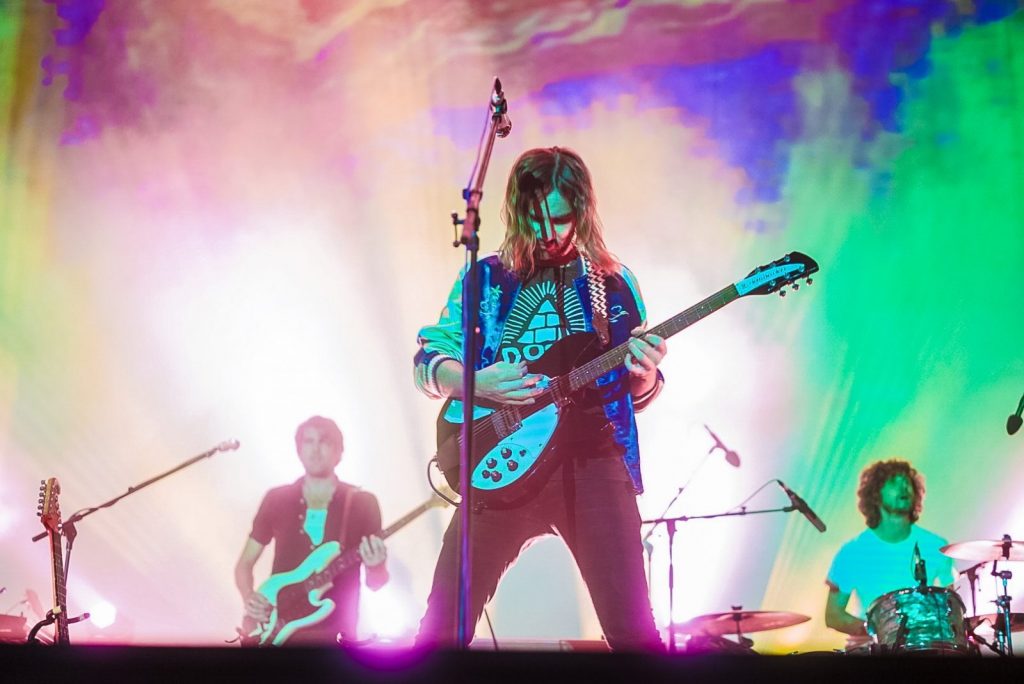 It was a fad. By 1969 the hippies were disillusioned with the war overseas, the deaths of major political and social players, and the constant drug use. Kevin Parker, singer of Tame Impala, resurrected echoes of the era on the band’s excellent debut record Inner”speaker. It took the best of acid-soaked 60s pop, borrowed from 70s hard rock, and bowed to 90s Flaming Lips. Coincidentally Parker’s voice sounds a lot like John Lennon who wrote the greatest acid songs of all time (“Tomorrow Never Knows”, “I Am the Walrus”, “Lucy in the Sky with Diamonds”). 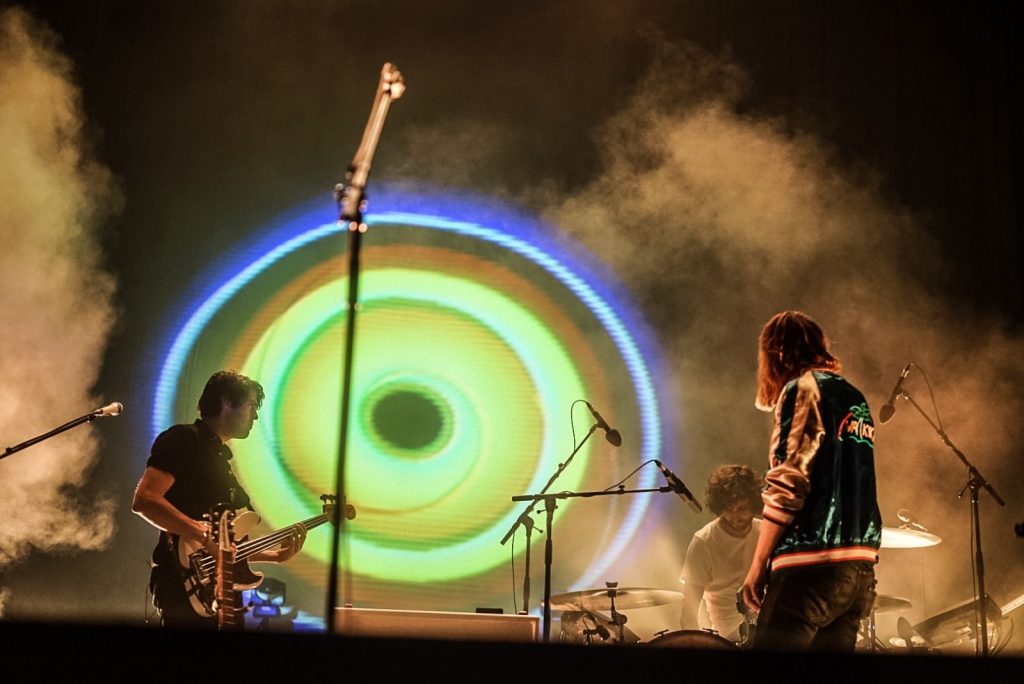 The band’s current album is titled Currents. It is a breakup record that’s loaded with themes of separation and guilt. A look at romanticism at the end of the romance. This album also separates the band from their guitars. Instead, synthesizers shower the record; however the instruments are still present, though it’s more of a soft whisper than a loud howl. 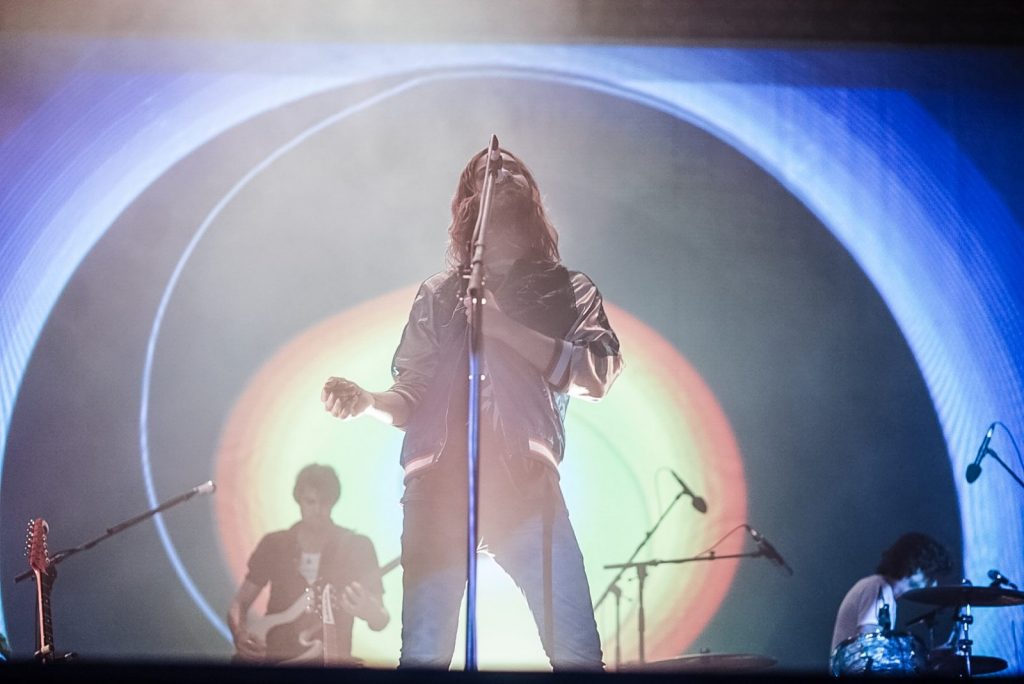 In fact, you could call this Kevin Parker’s first solo album. He wrote, produced, mixed, engineered, sang, and played every instrument on the record. However, Parker couldn’t break up with the band. 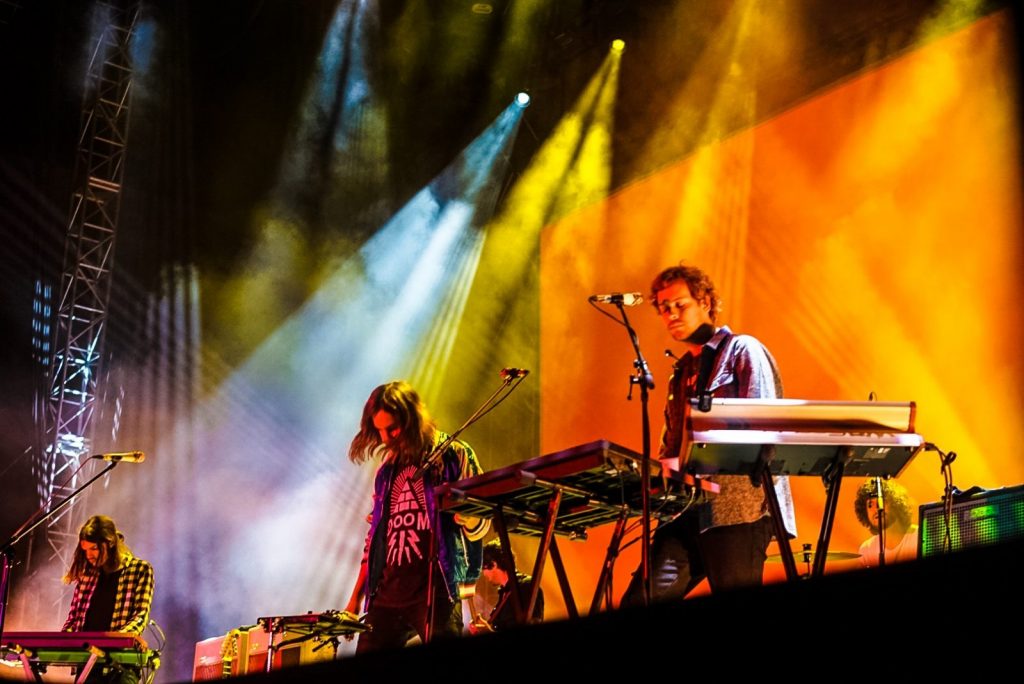 Tame Impala, along with Unknown Mortal Orchestra, played at the Greek Theatre on a warm, September evening. Once the sunset sank into the sky, a burst of light erupted on the theatre. The acid-washed “Nangs” kicked off Tame Impala’s setlist. It was followed by the seven minute single “Let it Happen.” A giant explosion of confetti covered the entire floor of the Greek by the end of the song. A roar of applause soon followed. 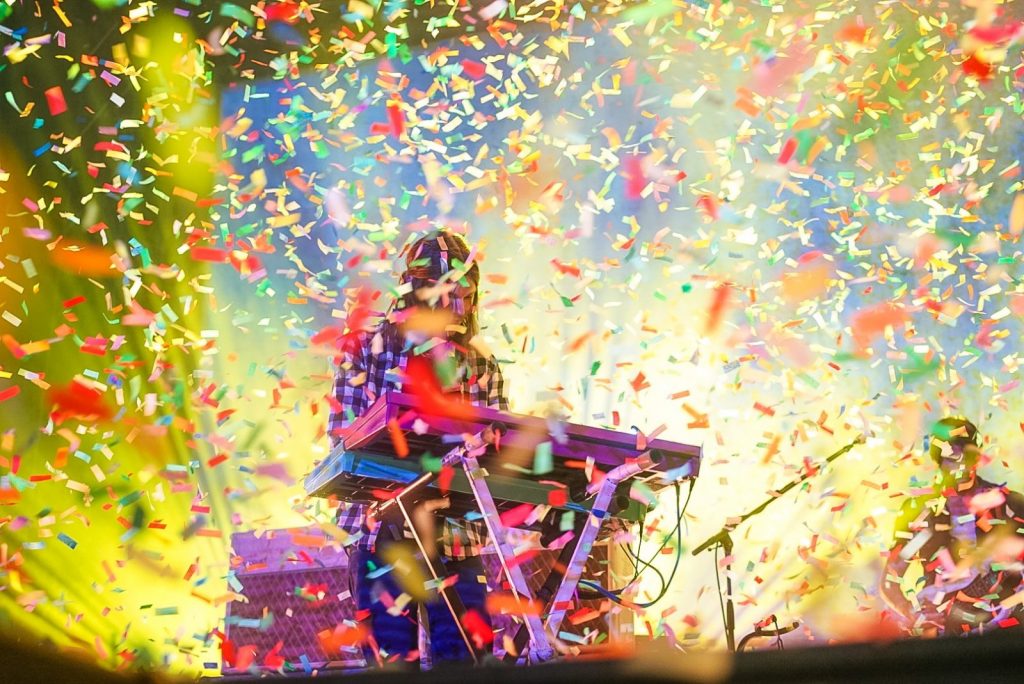 The band made sure to play the previous hit singles like the buzzy “Mind Mischief” and stomper “Elephant” though fan favorites like “Why Won’t They Talk to Me?” and “Apocalypse Dreams” also made the cut. The band is touring for the album Currents, so plenty of fantastic songs from the new record were played too. 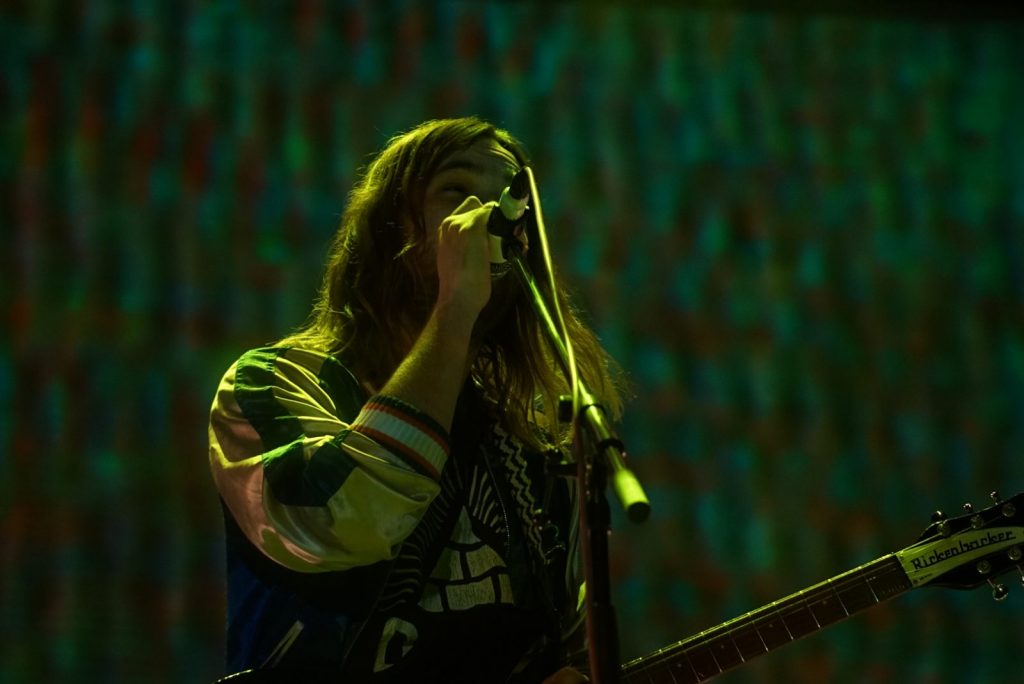 “The Less I Know the Better,” with its infectious groove, had the crowd dancing while the somber “Eventually” erupted a chorus among the theatre. One very interesting moment was a improvisational piece titled “Oscilly.” On the wall of the Greek, a projected beam of light covered the theatre. A lone Kevin Parker plucked his strings and the beam of light was jumping and buzzing in real time. Parker continued with more complex chords and eventually had a full on guitar solo as the beam danced with such vivacity. It was unlike anything I’ve ever seen at a concert. 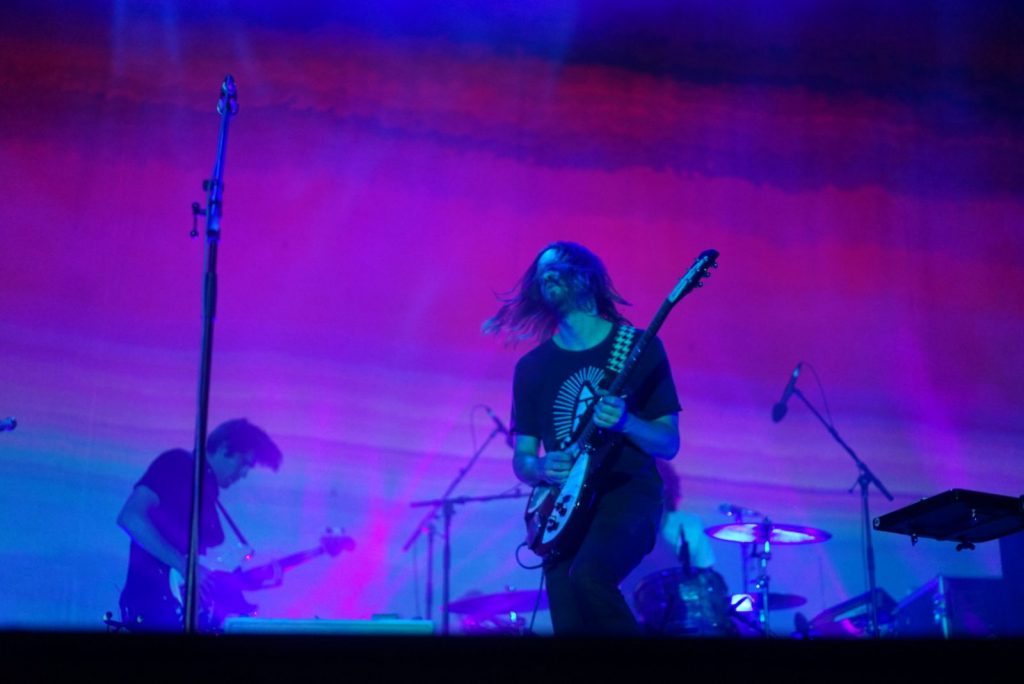 The band saved their most popular song for the encore. The opening lines of “Feels Like We’re Only Going Backwards” was accompanied by a final storm of confetti covering the entire theatre. A sea of colorful paper drowned the fans as they sung along with Parker. “New Person, Same Old Mistakes” closed out the night. This song gained traction when Rihanna covered it on her latest record “Anti” after Parker gave his blessing. 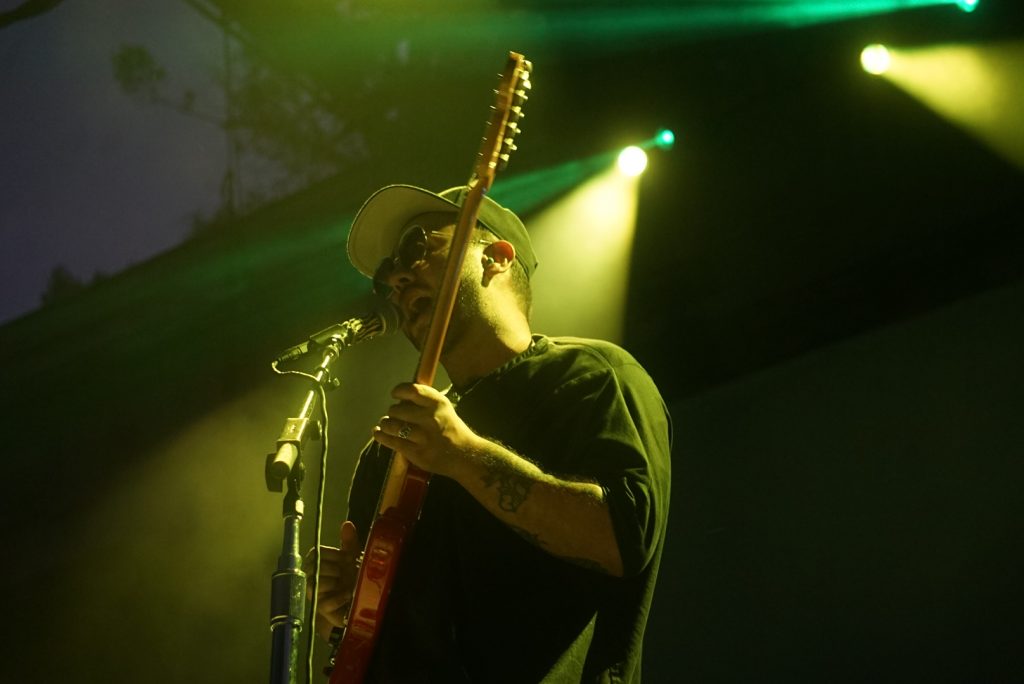 The opening band was the Portland-based Unknown Mortal Orchestra, also known as UMO. The band had a short and sweet set with funky lo-fi numbers like “So Good At Being in Trouble” and “FFunny FFriends.” The band also tossed in a groovy cover of the Grateful Dead’s “Shakedown Street.” That was a highlight. The band was accompanied by backup singers for “Multi-Love” and “Can’t Keep Checking My Phone” at the end of their set.

Setlist: Nangs | Let It Happen | Mind Mischief | Music to Walk Home By | Why Won’t You Make Up Your Mind? | Why Won’t They Talk to Me? |The Moment | Elephant | The Less I Know the Better | Daffodils (Mark Ronson cover) | Eventually | Yes I’m Changing | Alter Ego | Oscilly | It Is Not Meant to Be | Apocalypse Dreams || Feels Like We Only Go Backwards | New Person, Same Old Mistakes

Find out more about Tame Impala on their website.

Setlist: From the Sun | How Can You Luv Me | Shakedown Street (Grateful Dead cover) | Thought Ballune | The World Is Crowded | So Good at Being in Trouble | Swim and Sleep (Like a Shark) | Stage or Screen | Ffunny Ffrends | Multi-Love | Can’t Keep Checking My Phone

To get more information on Unknown Mortal Orchestra, go here.