The chapel of ritual was quite familiar as it had been only a touch over a trip and a half around the Sun since Papa Emeritus III & The Nameless Ghouls known as Ghost adorned the stage of The Warfield. Again, accompanied by giant backdrops of stained glass and similar décor of Baphomet-like inspiration, there were equal parts of adrenaline and fervor amongst the crowd, balanced with the ominous scene so well set by the quintet from Linköping, Sweden. No external white noise perpetuated by the scoop seekers and blog hackers this evening, all attention was on the band, right here, right now. 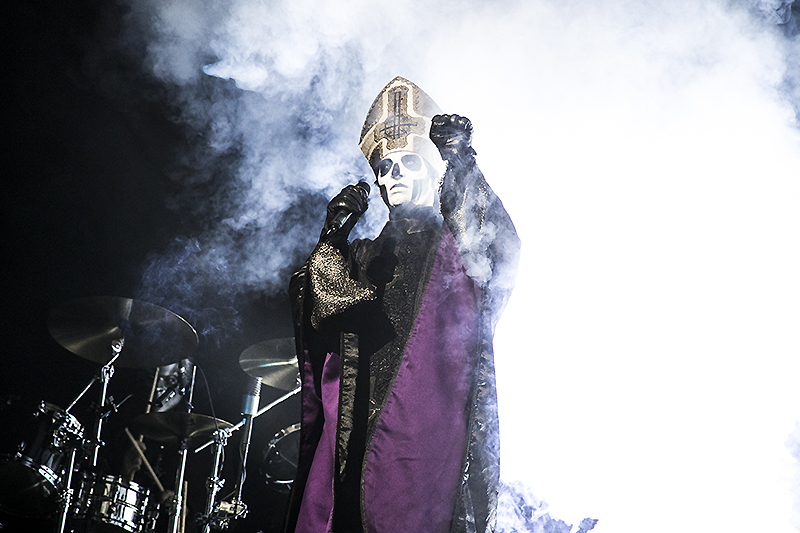 This headlining off-date was a special treat for Bay Area fans just three days prior to their scheduled date with Iron Maiden in Oakland at Oracle Arena. Ghost is still in full swing on the road supporting Maiden on this North American leg of The Book of Souls Tour. The display of local devotees was as strong as Roman Catholic guilt, the venue was packed! This crowd couldn’t have cared less who was behind the masks or who you think “the band sounds like.” It was about the songs and could you pass the test? San Francisco crowds are well-known to be both tough critics and over the top. It’s do or die in The City. In this town, Ghost is alive and very-well. 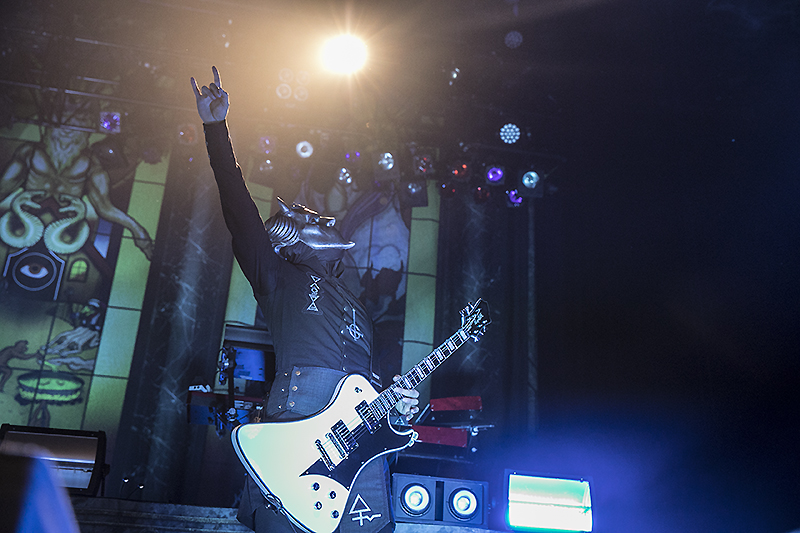 As wth all things Ghost, the most superior level of respect and compliment every step is brilliantly calculated. Most are well accustomed to a headlining rock or metal act using a classic hit song that gets the pangs of adrenaline caused by the anticipation to hit the audience hard. Going against the grain as they so gracefully do, Ghost sets a tone of calmness and medieval darkness with choral chillers “Miserere Mei, Deus” (Gregarious Allegri) and “Masked Ball” (Jocelyn Pook). 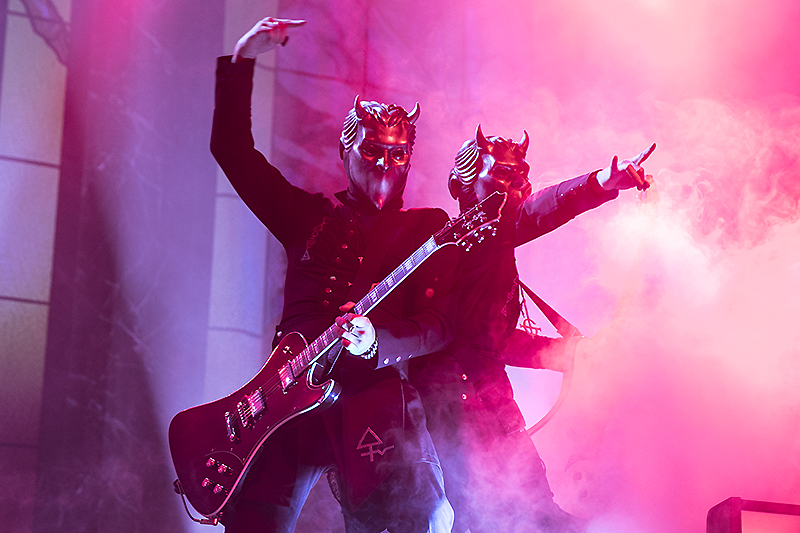 Once entranced, it’s the bombastic combination of the opening guitar slide, kick-snare combo, and keyboard of “Square Hammer” when Papa makes his entrance with first line “Living in the night, ‘Neath devils torn asunder” as the crowd turned it up way past eleven in response. Every verse and chorus sung at full scale as if it were a classic Journey tune. Not surprising however, as this little band from Sweden topped Billboard’s Mainstream Rock Songs chart at #1 in January of this year with “Square Hammer.” The anticipation was rewarded once Papa graced the crowd in his signature vestment and mitre attire reminiscent of the head dude in Vatican City. 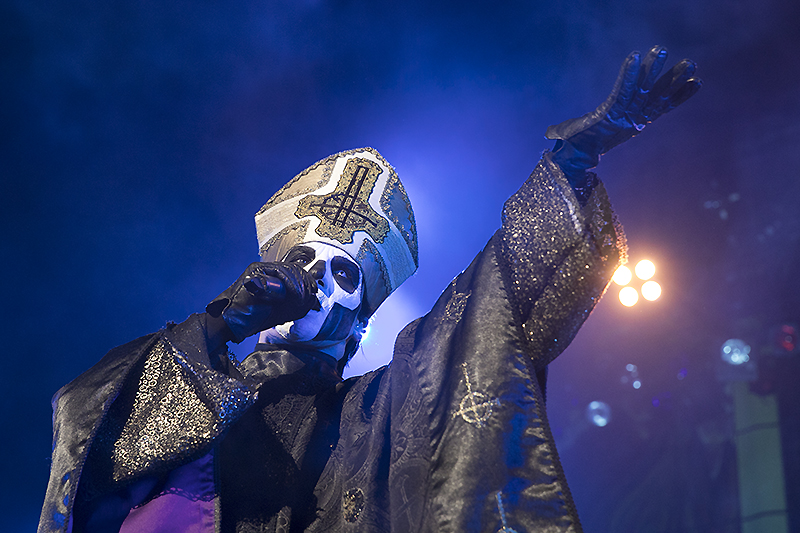 From within the first thirty seconds, one thing was clear. If you’ve seen the band live before, regardless whether you follow the band’s inner movements or not, these new Nameless Ghouls came to fuck shit up. The execution of the songs, the passion in which they attacked their instruments, and the confidence with which they incited the crowd were far beyond expectations. There was a rebirth within this band that did nothing but make a great product even better. Also, never before has a keytar been made to look so cool. 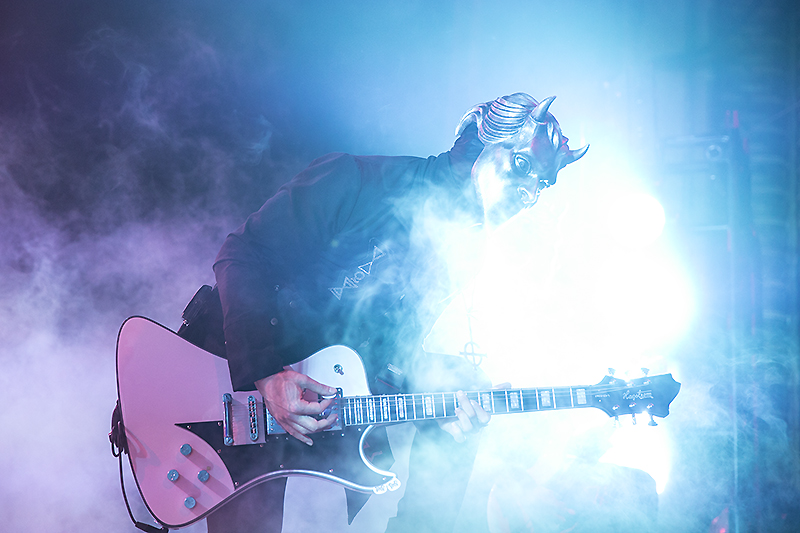 They proceeded to mix things up well, bouncing around releases with another song that reached high on Billboard’s chart, “From the Pinnacle to the Pit,” alongside “Con Clavi Con Dio”, the cry for Satan to hear the pleas of “Per Aspera ad Inferi.” The growth of this band has been tremendous and it has been a pleasant journey watching Papa Emeritus (I, II, and III) evolve as not just a figure, but as a performer and frontman. There was a focus on the spectacle and initial vibe the band gave as a whole when they first visited San Francisco’s Bottom of the Hill on the Thirteen Dates of Doom Tour. Papa has become in proper proportion just as big of importance as the song itself. He has a very elegant and classy demeanor overruled by a sinister sense of humor that engages the enamored audience. 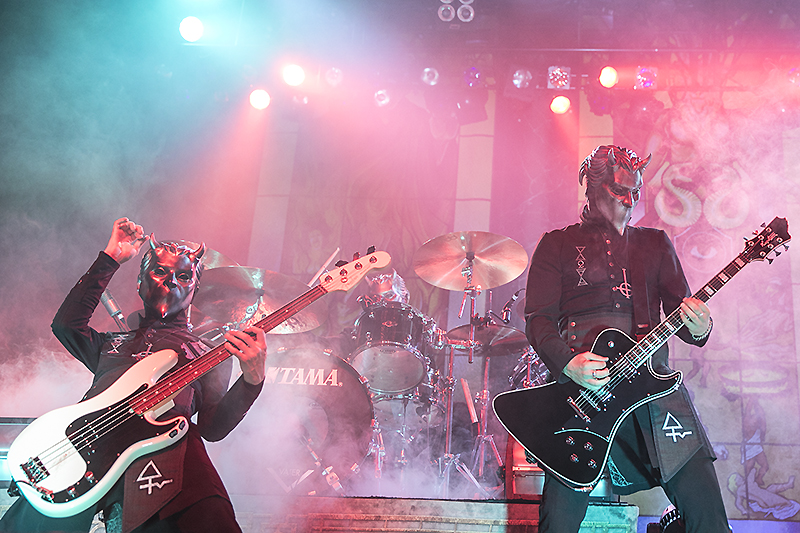 The evening would not only include costume changes; these clever Swedes had more surprises in store relishing in their headlining return. Papa had ducked into the inner sanctum of the Warfield to change garb and return with the most current version of Papa III. Dressed as if perhaps he was the Church of Satan’s representative on The Titanic’s tragic voyage his presence was commanding and he had the crowd in the palm of his hand as the band scorched through “Cirice,” the mellow yet powerful “He Is,” and the triumphant sounds of “Year Zero.” 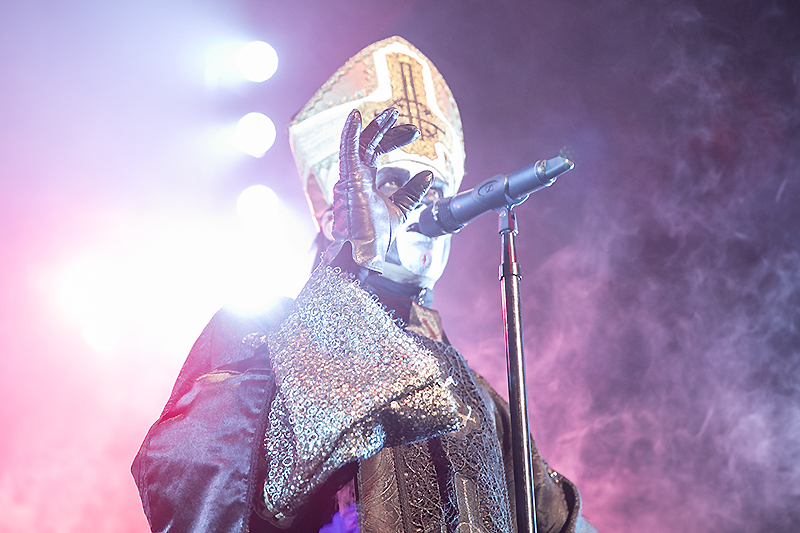 The evening’s ending would include graffiti guns that put most Super Bowl parades to shame, and songs about zombie queens, mummies, stench-filled chapels, and scary clocks. Ghost wrapped up the offering with “Mummy Dust,” “Ghuleh/Zombie Queen,” “Ritual,” and “Monstrous Clock”. Another stellar trip for Ghost, and thankfully they vanished in the night without leaving the smell of dead human sacrifice behind on Market Street.

Here’s a slideshow with more photos of Ghost by Raymond Ahner: