Throughout the history of popular music, an anticipation and anxiety has been felt by denizens of unsuspecting towns when ‘dangerous bands’ set up camp for local concerts. The delicious anticipation usually comes from fans who hope to go to these ‘forbidden’ shows and emerge somehow changed from the experience. 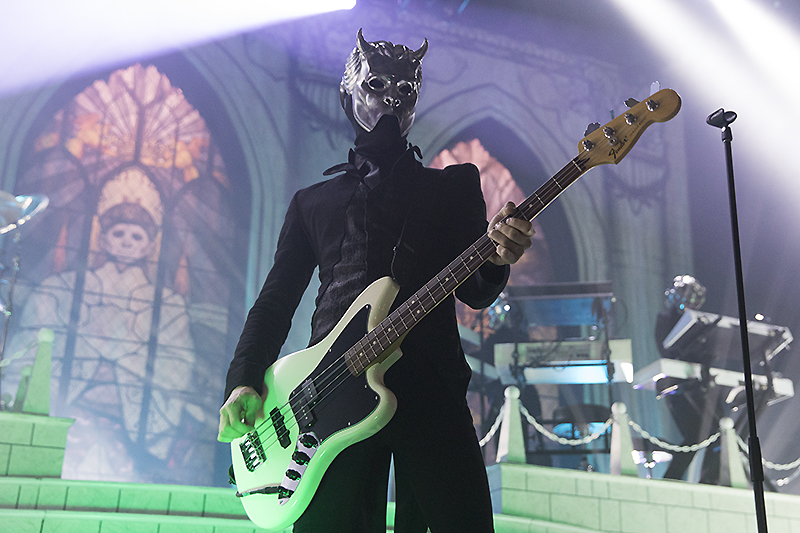 The creeping anxiety is usually sensed by city authoritarians who cringe at the thought of how the miscreant entertainers will rouse their fans to rise up and challenge established norms on topics like sex, politics, and religion. Because of the conflict of ideals, going to see ‘taboo’ acts always brings a visceral energy of excitement, threat, and menace…that anything could and would happen at these shows. 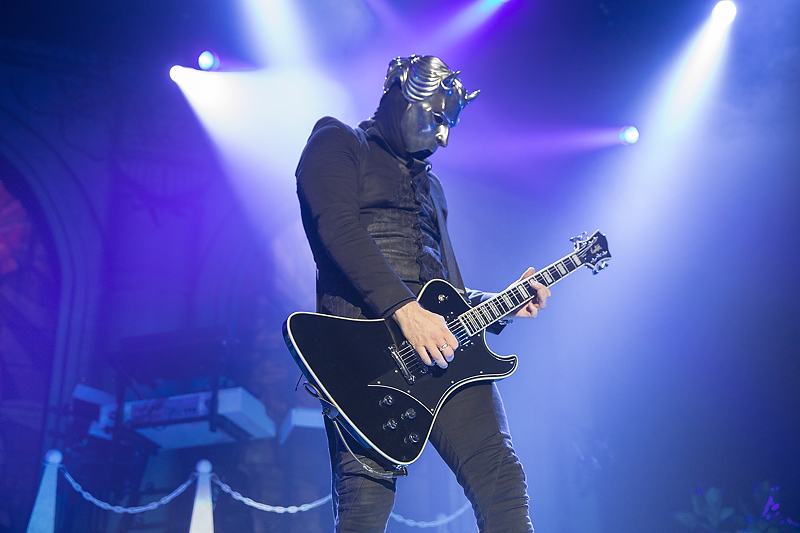 In the 1950s Elvis was too sexually provocative. In the late sixties the hippie movement was the ultimate threat to the establishment. Acts like Jimi Hendrix, The Beatles, The Stones, and The Doors challenged the conservative mores of the time by stretching the fabric and consciousness of society, prompting the younger generation to advance social equality and peace in the face of war. 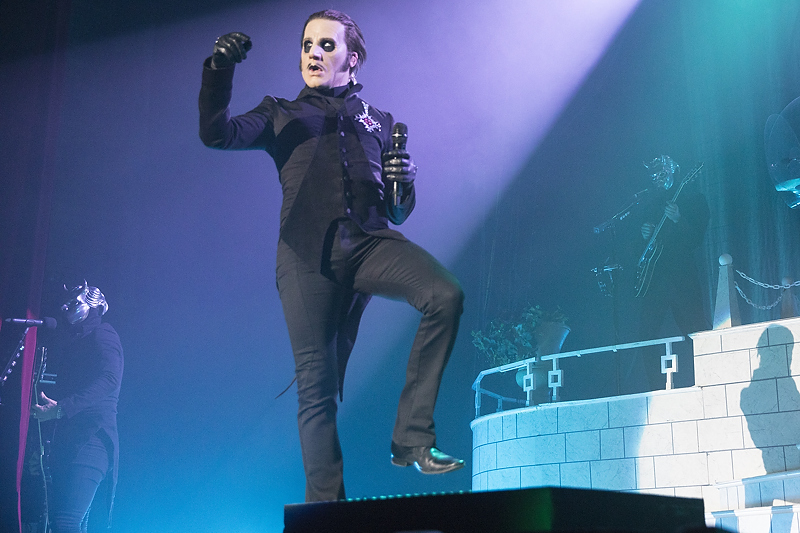 The 70s brought the likes of KISS, Black Sabbath, Judas Priest, and Led Zeppelin. Loud powerful music that posed the specter of corrupting any young impressionable minds that soaked in their abrasive grooves and messages. 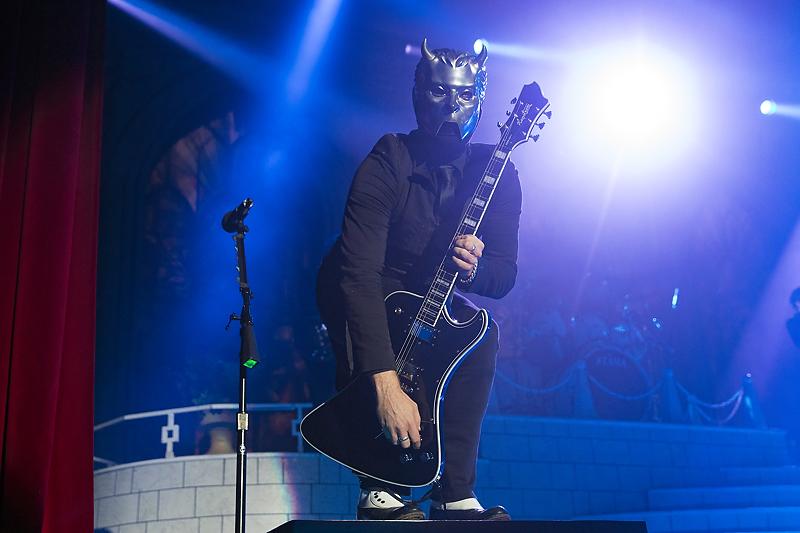 In the 80s and 90s, religious zealots picketed in front of concert venues against such agents of evil as Ozzy, Iron Maiden, WASP, Mercyful Fate, and Marilyn Manson. Meanwhile law enforcement and the PMRC warned the dangers of N.W.A., Guns ‘n Roses, Ice-T, and Public Enemy. 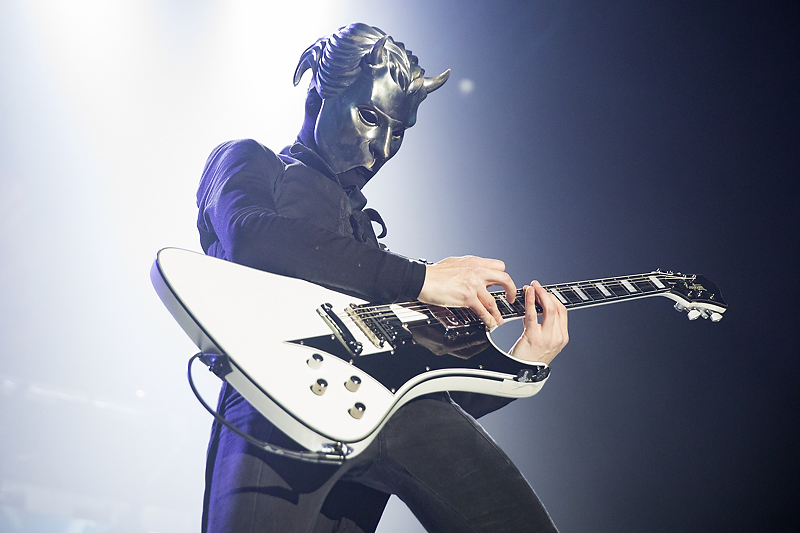 Those types of bands are now very few and far between. The never blinking eye of the internet and social media makes it such that any shade of band mystique is immediately stripped away. Sweden’s diabolical band Ghost is one of the few on the scene today that still carry a frightening and mysterious charisma about them. When they recently floated through City National Civic in San Jose, they brought with them the prospect of feeling the rush of a ‘dangerous’ show. 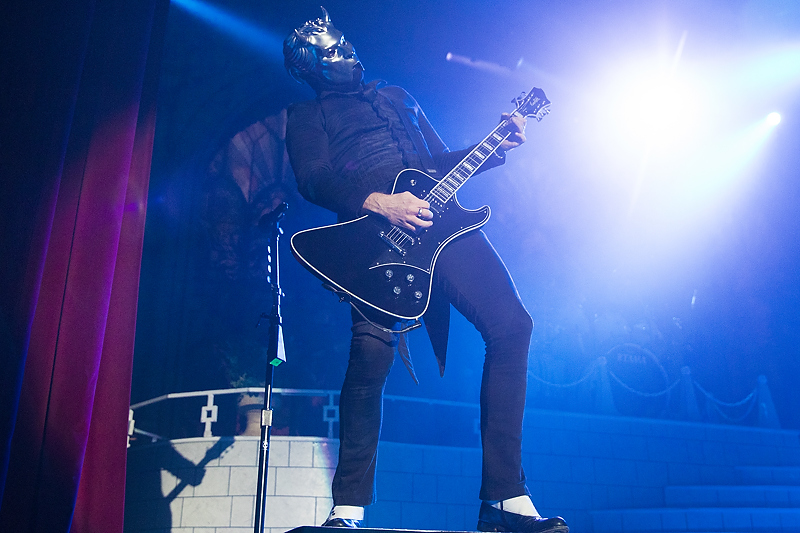 Entrance to the show was harmless enough. There were no religious protesters warning fans that the Ghost show was a portal to hell. No nefarious drug use by crazed fans lurking out front. To the contrary, it was a friendly gathering of metal fans who were venturing out on a Thursday night (some with their children in tow) to see a good heavy rock spectacle. 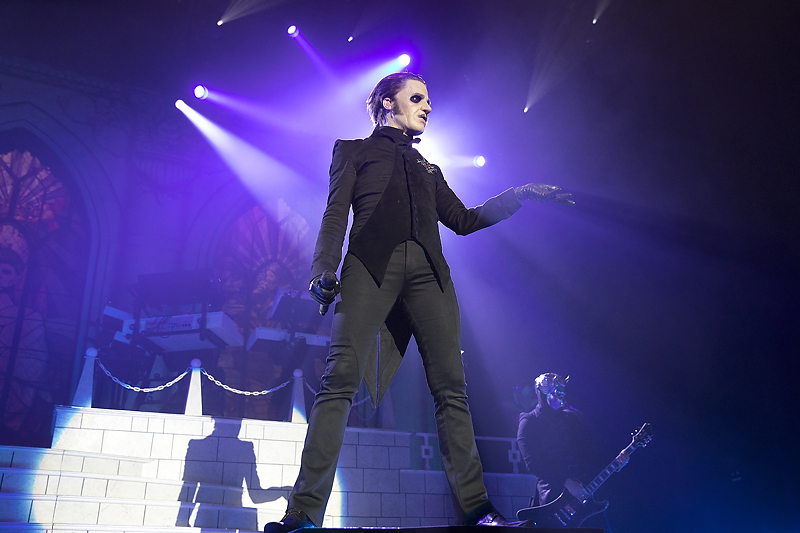 To be fair, there were quite a few folks in face make up dressed in their finest Ghost garb and sporting upside down crosses. This did draw many strangely quizzical looks from the older ushers working the show, but the response was almost invariably a smile from the ‘freaks.’ 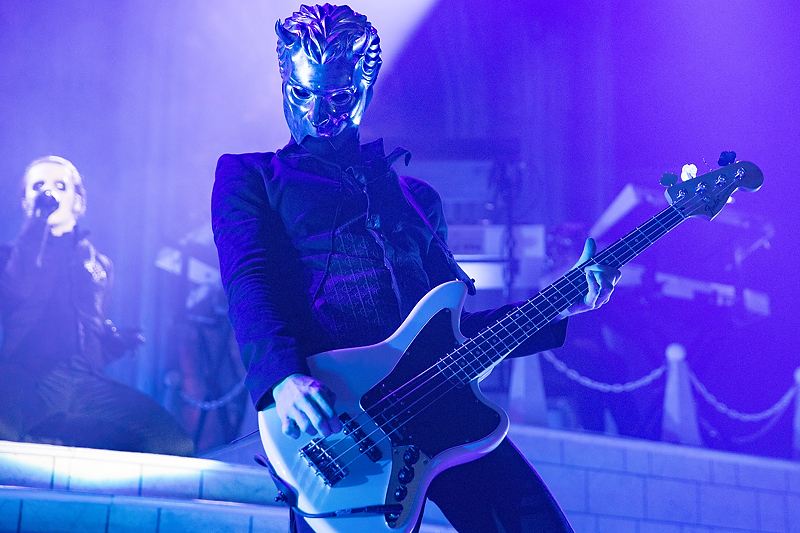 By the time the show began, the feeling of anticipation peaked. When the lights went out and the curtains parted, a large cathedral setting with illuminated stained-glass windows was unveiled, with the visage of Papa Nihil portrayed in the center window, presiding over the ritual. The crowd pushed toward the stage as the haunting opening ‘Ashes’ played and a slight aroma of frankincense permeated the hall. 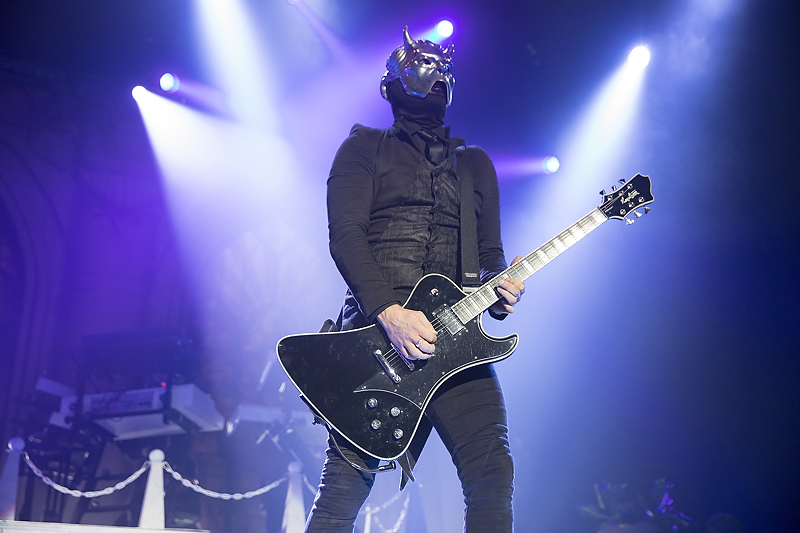 The silhouettes of Nameless Ghouls (and Ghoulettes) then began to lurch back and forth as they fired up the single ‘Rats’ from the recent release Prequelle. As new frontman character Cardinal Copia (latest incarnation of lead singer Tobias Forge) strolled onto the stage wearing all-black tails and crooning of the downfall of mankind, the energy hit a fever pitch. The power of ‘dangerous music’ invaded the moment. 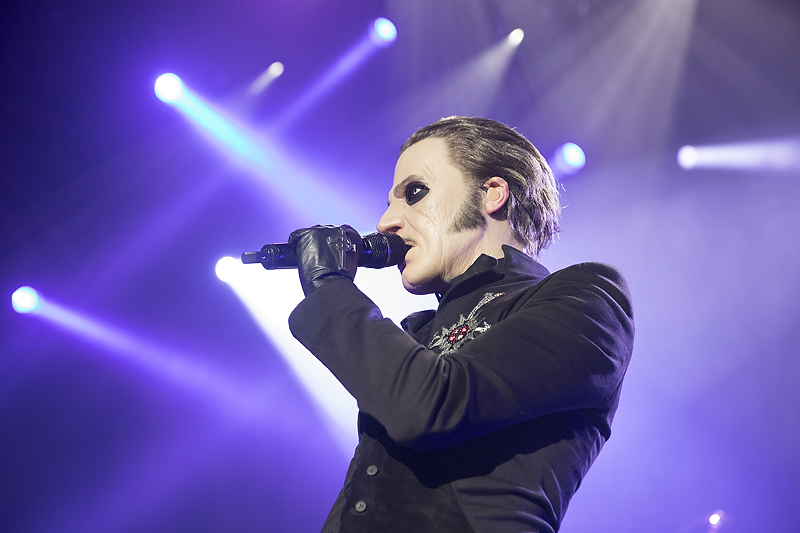 As the evening’s sermon progressed, the mystique of Ghost as a huge and ominous dark entity channeling the music of the devil was dialed back a bit. Though the subject matter of the music centered on darkness, decay, and toiling in the netherworld, once you get past the demonic flash, Ghost is not all that scary visually or musically. 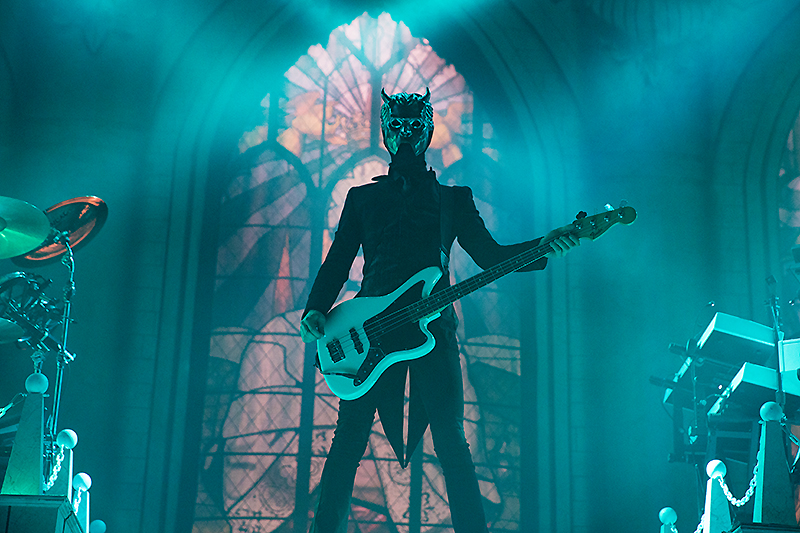 Cardinal Copia is more like a sinister rock and roll ringmaster than a heavy metal spawn of evil, and visually is less threatening than his Papa Emeritus predecessors. For a while he even sported a white suit and Fedora that look like they were stolen from the Michael Jackson ‘Smooth Criminal’ video. 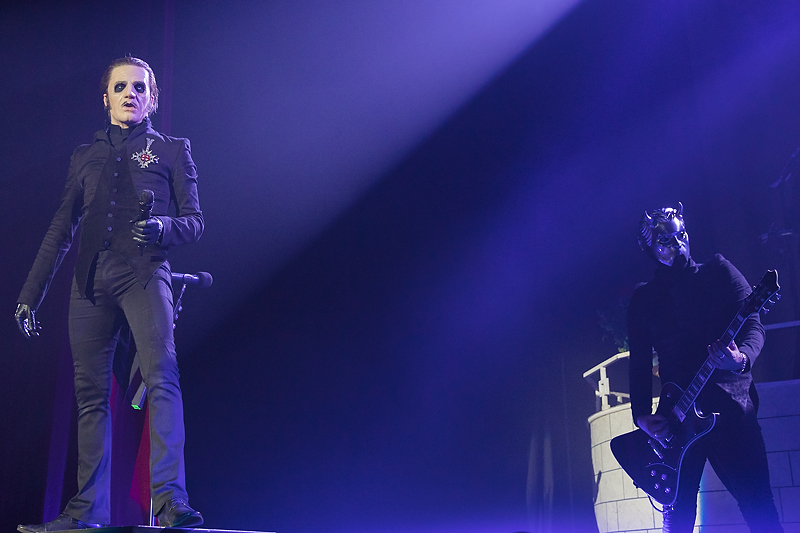 Ruling the stage with an oddball sense of satanic humor, Copia orchestrated the Ghost stage theatrics which played like an old late-night horror flick on TV. Plenty of dark settings and innuendo but in a pop culture package. 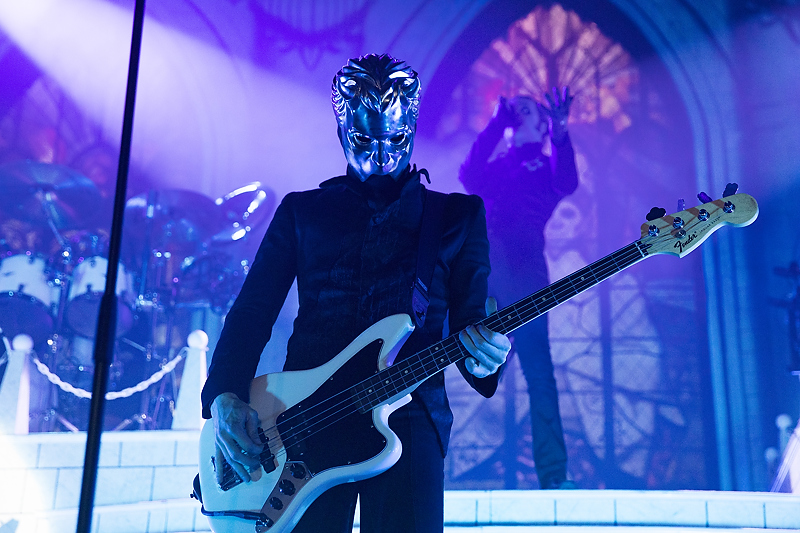 Though from the dark metal tundra of Sweden, Ghost sports an affection for sugary pop harmonies, and holds Swedish pop icons ABBA as an influence. Also, the fact that they have won a Grammy has perhaps stolen some of their malevolent sheen. 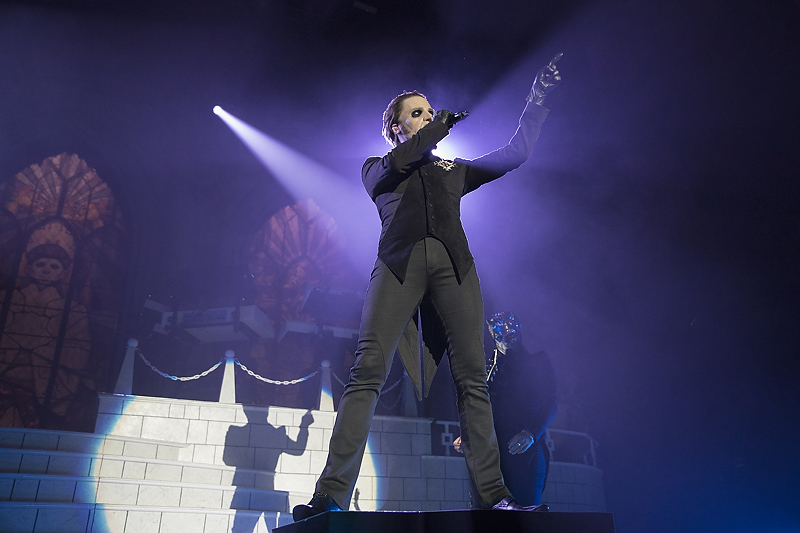 Musically the new lineup of Ghouls is solid, especially the guitar Ghouls ripping dual leads as if they had conjured the talents of Maiden’s Adrian Smith and Dave Murray. Destroying metal masterpieces like the Grammy-winning ‘Cirice,’ the sinister sweep of ‘Square Hammer,’ and the “ass wobble” rumble of ‘From the Pinnacle to the Pit,’ Ghost has the chops to play with any metal band; however their music tends to be on the lighter end of the heaviness spectrum. Using more orchestral washes then the bludgeoning volume and tribal stomp of other bands of their ilk, their mix is more like Blue Oyster Cult than Black Sabbath or Slayer. 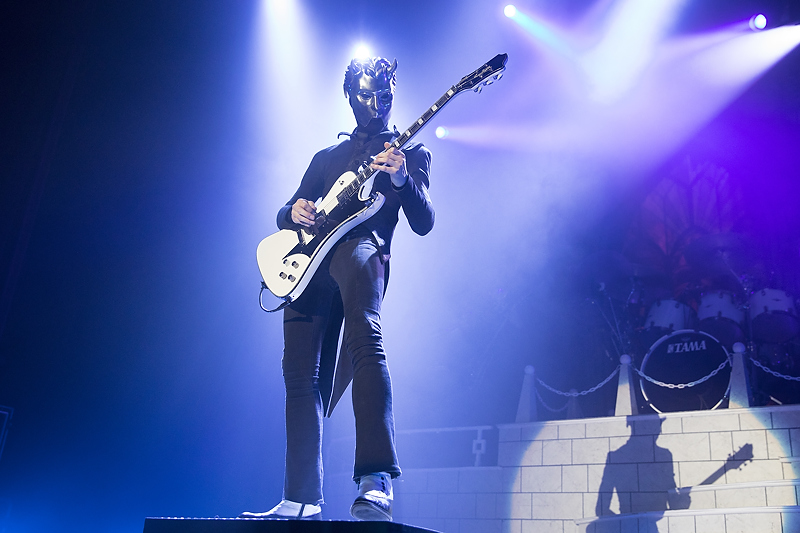 The ability to sustain the volatile energy that has become associated with them will be the barometer of whether Ghost lives up to the billing of a ‘dangerous band.’ A band’s image can only go so far before it needs to be propelled further by the music and performance, but for now the ever looming thunder cloud of Ghost and their brand of metal is the most dangerous music going.