All photos by Ruchita Lalmalani

There are few trios that can levitate a room for two hours by playing instrumental soundscapes, but that is exactly what Earthless recently did to the Chapel and all who packed into the Valencia Street music hall. Have hallucinogenic music….will travel. 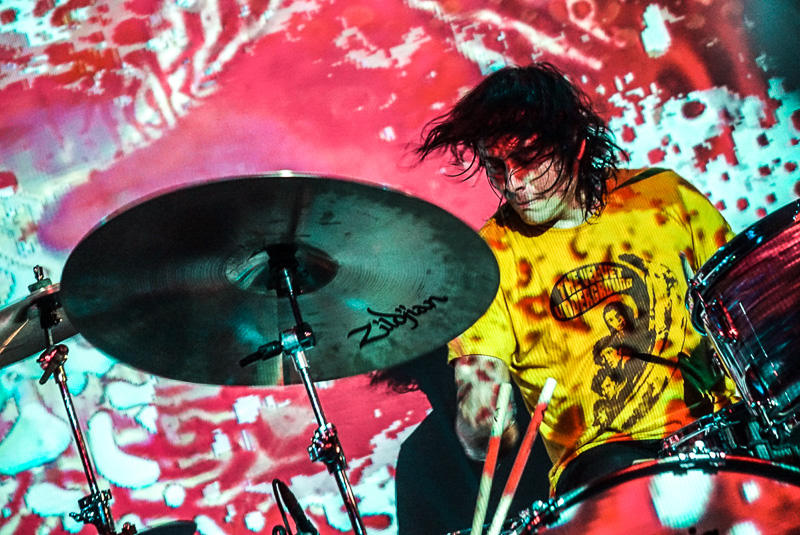 Under a pulsing sky of psychedelic color gel clouds and a projected archway proclaiming their name, Earthless, quietly sauntered onstage to the shouts and cheers from the assembled crowd. That entrance would be the last thing they did quietly all night. 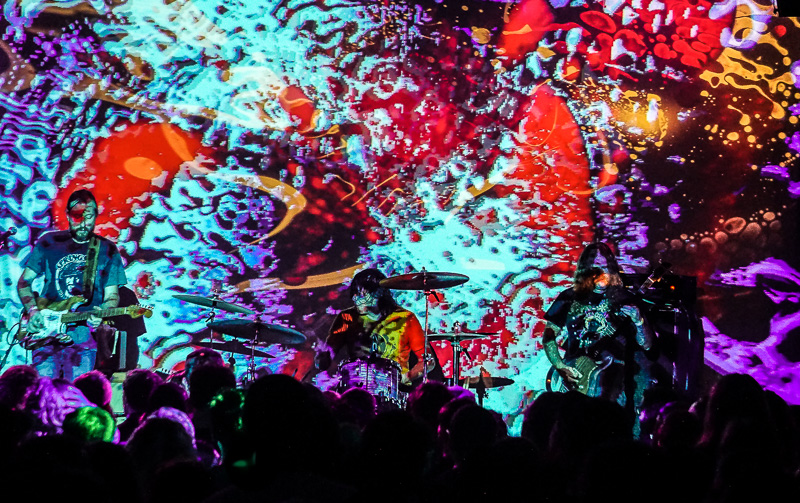 Lighting the fuse of the evening, Isaiah Mitchell’s wailing wah-drenched guitar crashed into Mario Rubalcaba’s thunderous drums, and was lifted off the ground by the ferocious bass rumble of Mike Eginton. The volume swelled, and the San Diego trio of heavy-handed head trip instrumentalists zagged directly into a hefty 30 minute mash of ‘Uluru Rock’ and ‘Violence of the Red Sea’ (both off of From the Ages – 2013, though with the order inverted). 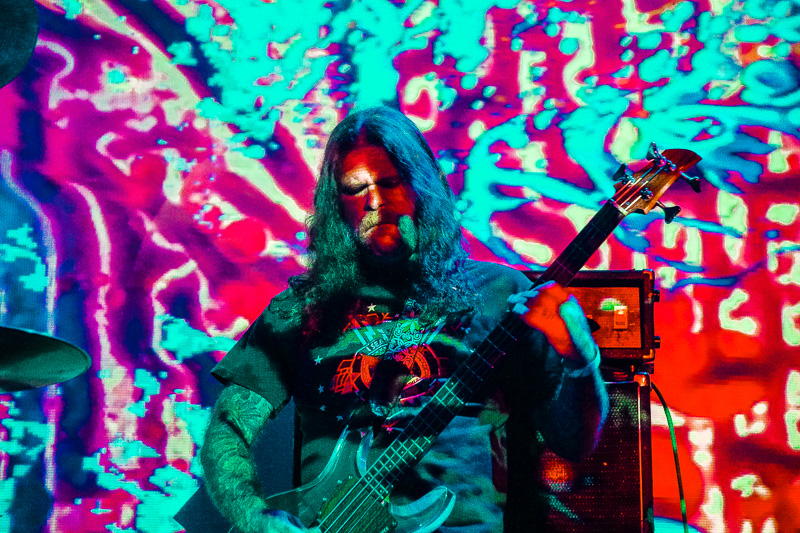 Soon the room was filled with billows of smoke emanating from bobble headed rockers with half lidded eyes and Cheshire cat grins, as Earthless continued on with their aural assault. Reluctant to glom onto the ever popular stoner rock genre, Earthless see themselves more as musical misfits, more likely geek out on coffee and music than getting high and driving fast. 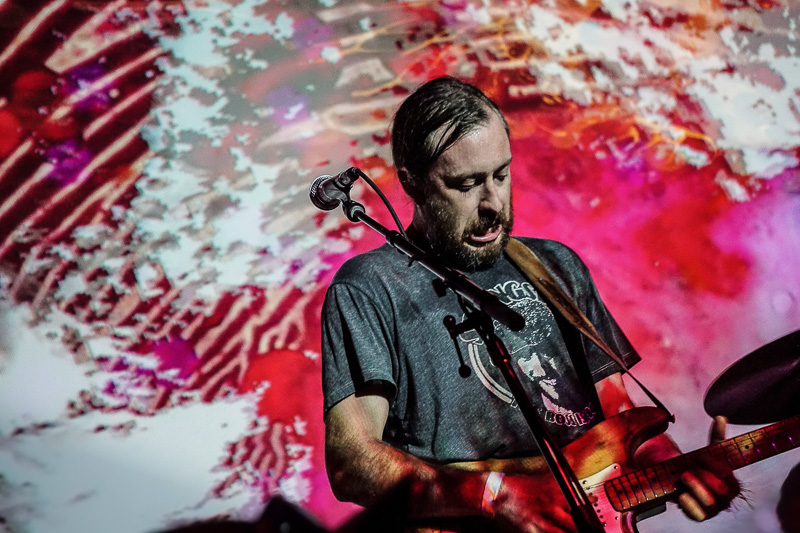 Actually, the band is an amalgamation of many artists and influences. If you could find the five-way intersection of Blue Cheer, Black Sabbath, Jimi Hendrix, MC5, and Ryo Fukui you would be in the neighborhood. Add in some lose yourself krautrock elements and you are sitting on their porch sipping iced tea in an abstract cosmic trip fueled by their music. 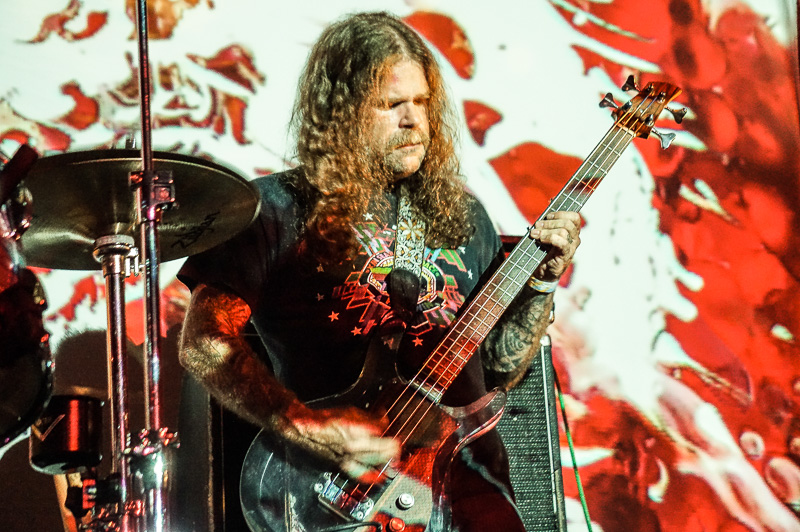 While taking in the sensory overload of the spectacle, it is easy to get lost in the universe of sound that is Earthless. On this night, it was as if the entire set was one long song. As if the band wanted to test their musical stamina against that of their fans who were doing their best to just keep up with the freak out.

Just when you could feel that Earthless was going to put a stranglehold on the joint, they let it breathe and handed the energy to the crowd to feel the tribal rhythm. Bouncing between jams, they picked another ‘jump off’ point and did a free fall into the depths of ‘Sonic Prayer,’ the self-titled track from their 2005 debut. 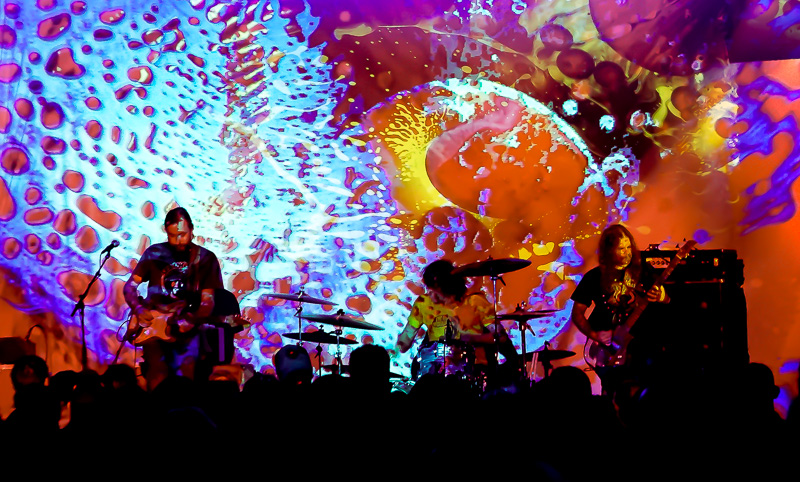 Rubalcaba looked like a cross between Ginger Baker and Animal from the Muppets as he attacked his drum kit with a seemingly ferocious hate that was balanced with the tender care of his poly-rhythmic technique. Eginton, who stands statue-still as he picks and manhandles his bass….plays like all of his focus of movement is fed only into his hands to expertly navigate the neck in time with the gallop of the drums. In the vein of classic rock rhythm sections such as Bill Ward and Geezer Butler of Black Sabbath, this pair are masters at figuring the best way to make the crowd jump and move while taking the most circuitous path between A and B. 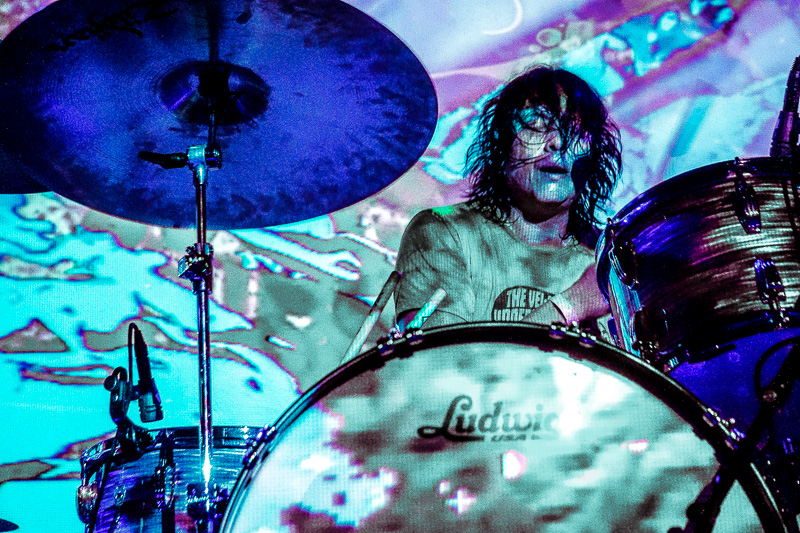 Then there is Isaiah Mitchell, the mad scientist with six strings, a wah pedal, and just the right amount of distortion, delay, and reverb at his disposal. Mitchell has roots to the Bay Area music scene, playing in such legendary underground acts as Drunk Horse and Howlin’ Rain. He definitely wears his Jimi Hendrix influence loud and proud, but he stretches to other places too, innovating the bending of the strings and the guitar in the same way that other modern day warriors like Matt Pike of High on Fire push the envelope. 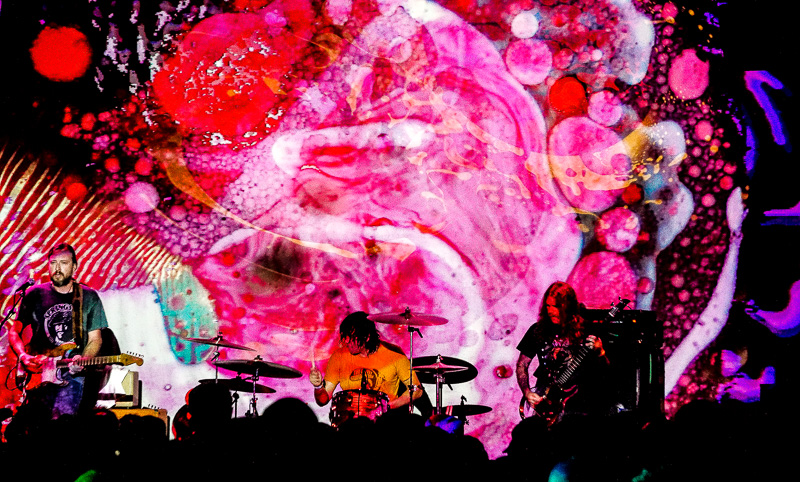 When Earthless finally stopped playing they got up and left the stage, stunned in silence the crowd took it upon themselves to make noise. Coaxing the band back out, Earthless took the journey on a slight detour as Mitchell stepped to the mic which until that point had been unused, adding vocals to the mix for the first time to cover the Tony McPhee house rocker ‘Cherry Red.’ And when the show ended there was a palpable feeling in the air. One concertgoer said he thought Earthless served as a medium to another dimension of the universe, and he then bought a round of beers for a number of strangers nearby before buying a t-shirt. Someone in the city buying a round for strangers? Maybe we did get transported to another dimension. Nope, I see SFPD ticketing cars….same dimension, but thanks to Earthless one with cool music.

Find out more about Earthless on their Facebook page.