The packed Masonic screamed for more Garbage on a September Saturday night. The band took a four-year hiatus from San Francisco. Shirley Manson apologized for missing the city during their 20 years Queer tour celebrating their self-titled album, though made it up to us with a rare treat finale. June 10 they released a new album, Strange Little Birds. 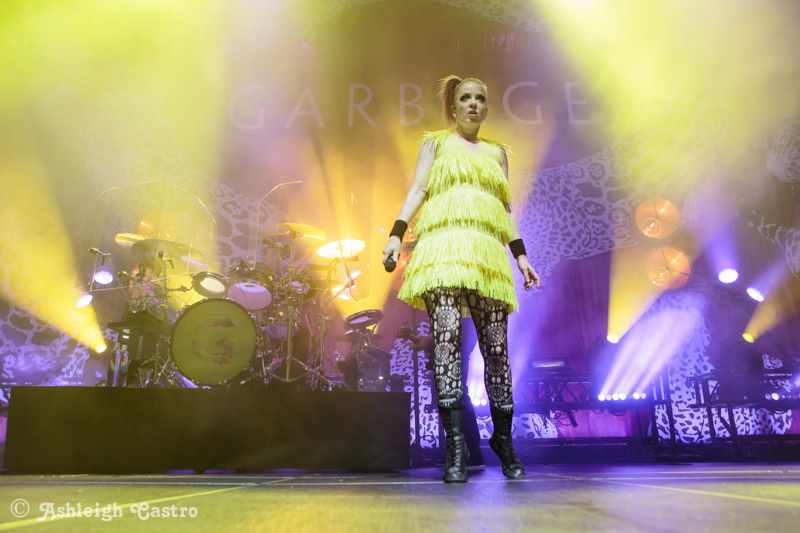 “This is the culmination of a lot of hard work,” described Manson. The album surely supports their dark inspiration, as gloomy times we face regarding politics, sex and race spark the bands rage and motivates them to create more music. “We’ve been scurrying around your outskirts for some time,” referencing that they’d been busy recording locally. 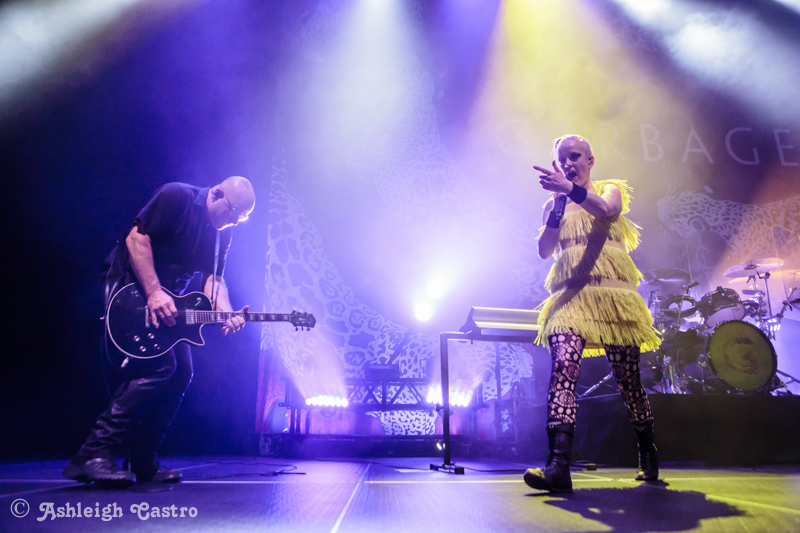 Shirley Manson, Butch Vig, Steve Marker and Duke Erikson of Garbage have been playing together as a band for 21 years. Collectively they claim solace in darkness. Pivotal times get their beats and words flowing. Their newest sounds confront society, releasing any fear of expression and criticism. Garbage’s set balanced pop and hard rock riffs fluidly, syncing the scope of their industrial career. 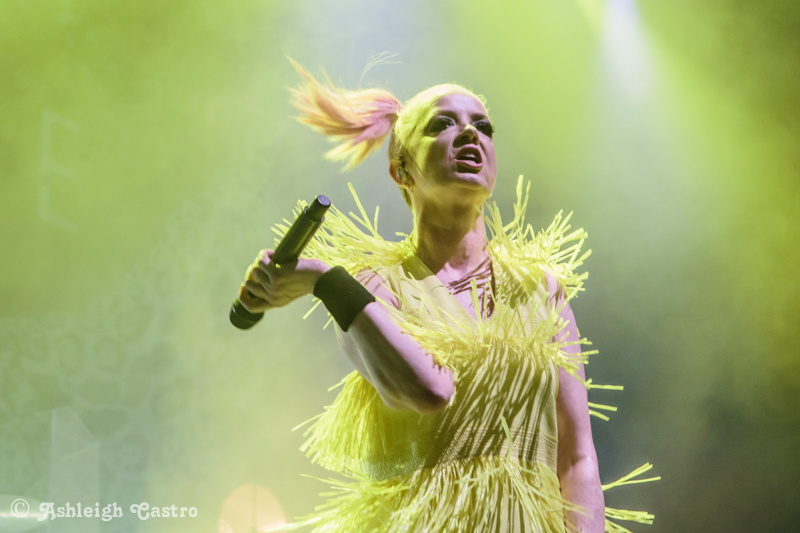 Crafting a delightful night, start to finish, Garbage proved why they’re one of greatest alternative bands – they are a group of super-musicians and Butch Vig has produced some of alternative’s most influential groups. 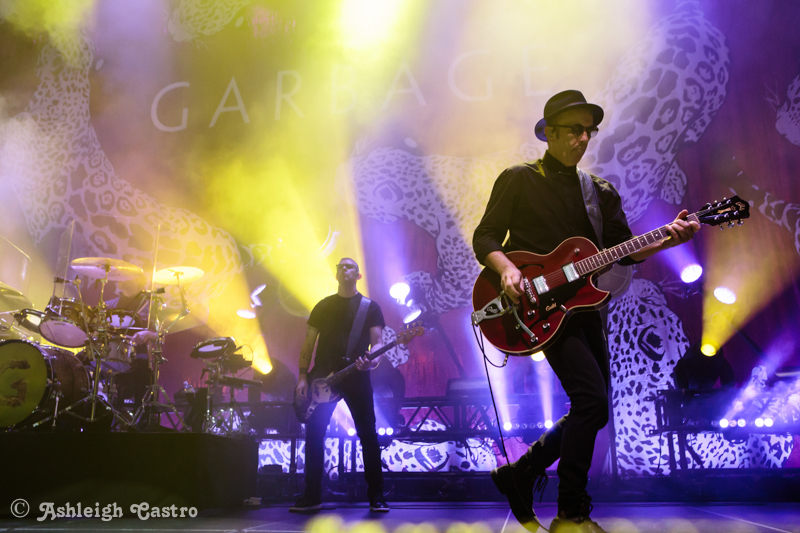 Garbage kicked things off chart-topping B-side “Subhuman,” which was popular on the UK Singles chart. “Burn down all your idols, destroy your idols/ Create a scene / There goes all your reason, it’s helter skelter/ It’s not a dream.” They followed with hits like “I Think I’m Paranoid” and “Stupid Girl” to get the audience revved up. Swept away by the crowd, Manson mired in the beauty of her surroundings. Noticing many of the young ladies who grew up on Garbage in the audience, she mentioned the “beautiful young women [made her feel]we’ve done something right.” 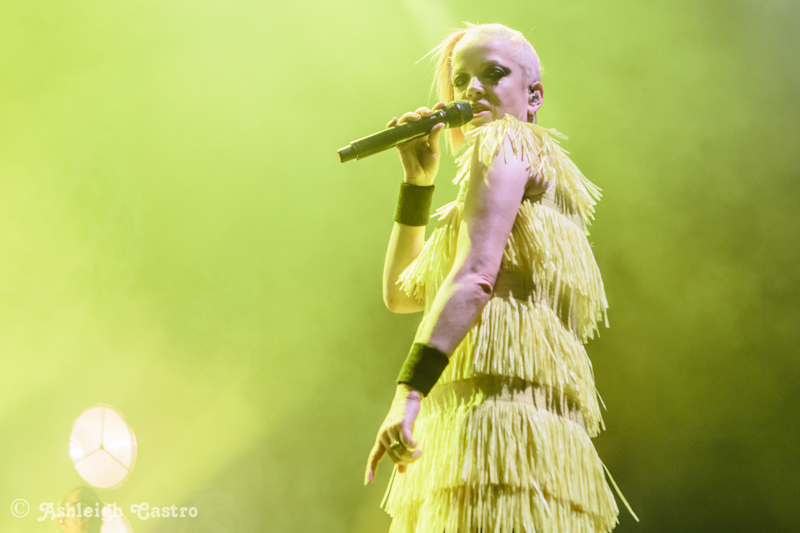 Wearing a neon yellow fringe dress and black boots, Manson strutted around the stage with attitude and joy. Refreshed to be with this crowd, her smile radiated. Manson shared personal experiences for the band throughout their career, exposing us to their raw talent and story. She explained that Bleed Like Me was their darkest time the music industry tried to intercept their sound with hip-hop. Manson laughed because that wasn’t the bands style, so Garbage decided to be “stubborn motherfuckers” and release an alternative album. To follow, they departed Warner Bros. and started their own record company, STUNVOLUME, where they debuted their album Not Your Kind of People in 2012. 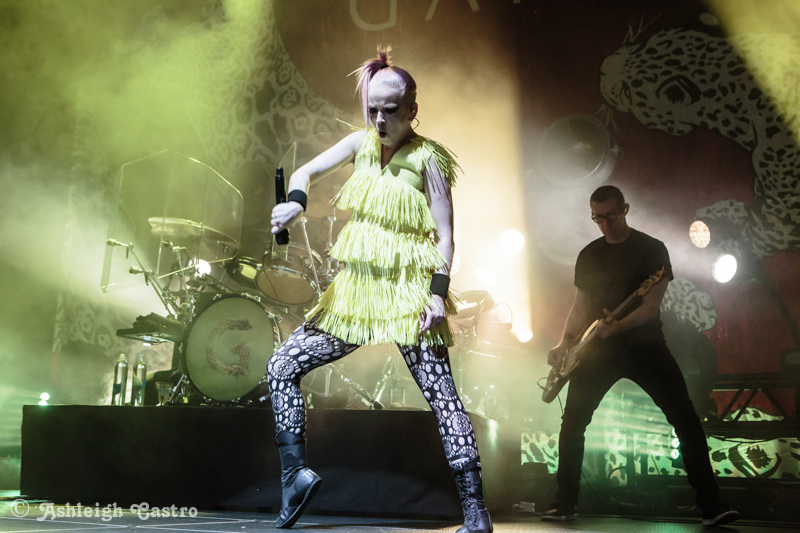 Providing balance, they toured us through electronic dance tunes, heavy rock riffs, and heart wrenching ballads. Garbage sounded flawless, tighter than any studio album could demonstrate and just as outstanding as when I saw them for the first time 14 years ago. 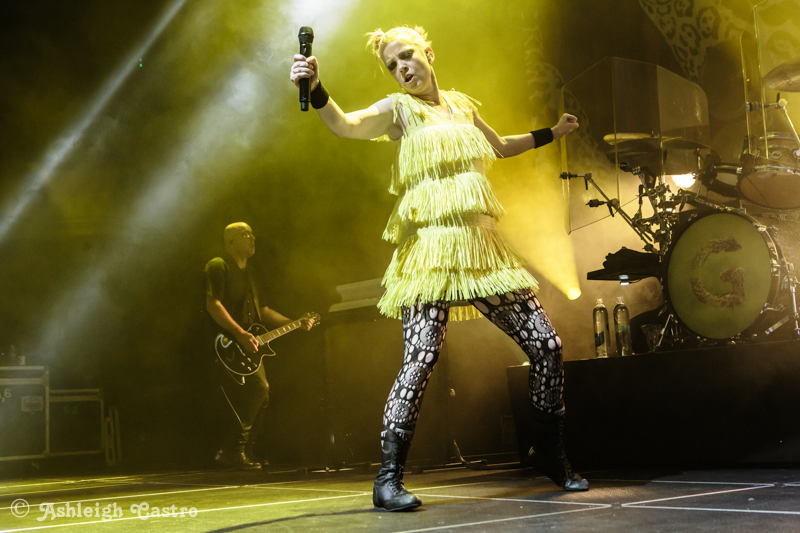 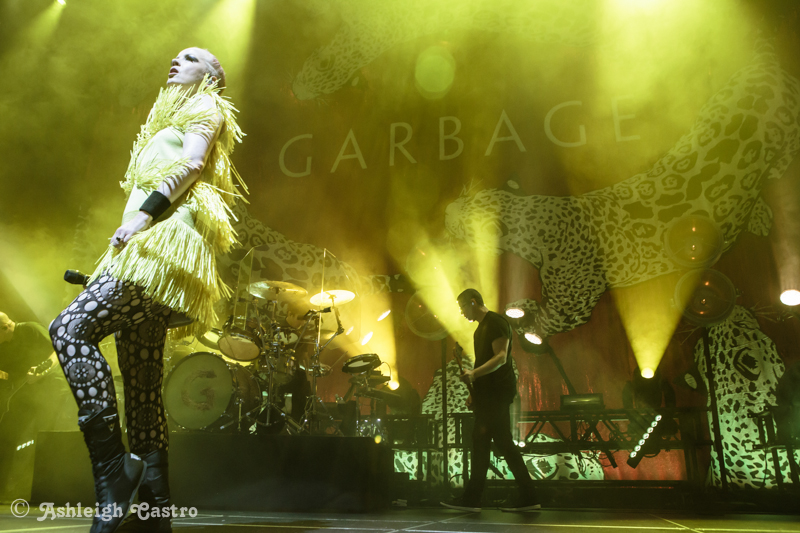 The house was entranced after Manson dedicated “Cherry Lips (Go Baby Go!)” to two Michaels she met at the meet and greet who continue throughout a turbulent life. Later, when they performed “Push It,” the audience lost it as if being reminded of the necessity to push the limits for evolution.

Of course there was a raucous encore aroused from the crowd. They ended with new songs that brought the audience to tears. Garbage returned for “Sometimes”, “Empty,” and “Beloved Freak.” The band delivered a surprise finish from Beautiful Garbage. A rare track for them to perform live, “Androgyny,” was evoked for the boundary-pushing city—the catchy song left everyone in an exhilarated, productive and shining mood.