All photographs by Paul Piazza.

With all of the recent rain and the general epidemic malaise that has affected much of the United States since the onset of 2017, a strong gathering of music fans recently assembled at the Warfield Theater in San Francisco looking for a remedy.

A remedy that would consist of community, positivity, and fun…of people coming together to remind each other that everything will be OK as long as folks stay together. A remedy that would come in the form of a good down-home tonic of New Orleans gumbo funk. And who better to administer that prescription than the New Orleans funk doctors Galactic and the Funky Meters? 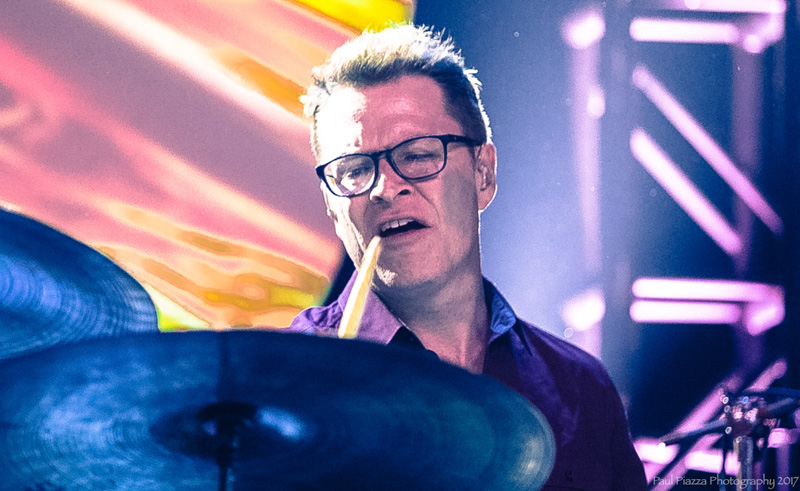 That was the scene at the legendary Market Street theater where the innovators and the originators would come together to fly a plush, colorful tapestry of funk. A funk flag that would be saluted and celebrated for an unforgettable evening that put the FUN in funk.

Galactic, who usually plays the Bay Area twice per year, and turns it out every time, delivered again with a 90-minute dance party that deftly showcased their transcendent skills and how much they are still growing as a band. 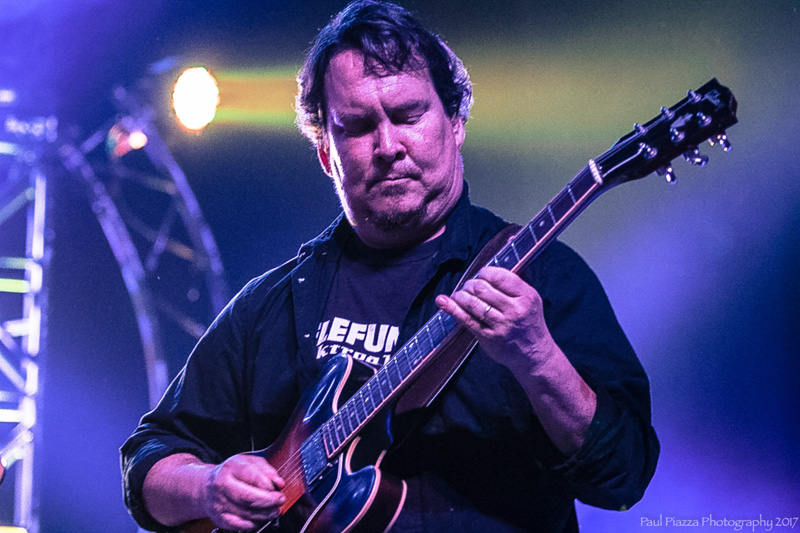 The band was already tearing it up as they are wont to do…with unparalleled drummer Stanton Moore serving as the captain of the funk vessel, and guitarist Jeff Raines, bassist Robert Mercurio, organist Rich Vogel, and the versatile brass section of Ben Ellman – sax and Cory Henry – trombone pumping out the jams that transformed The Warfield into more of a sweaty house party. 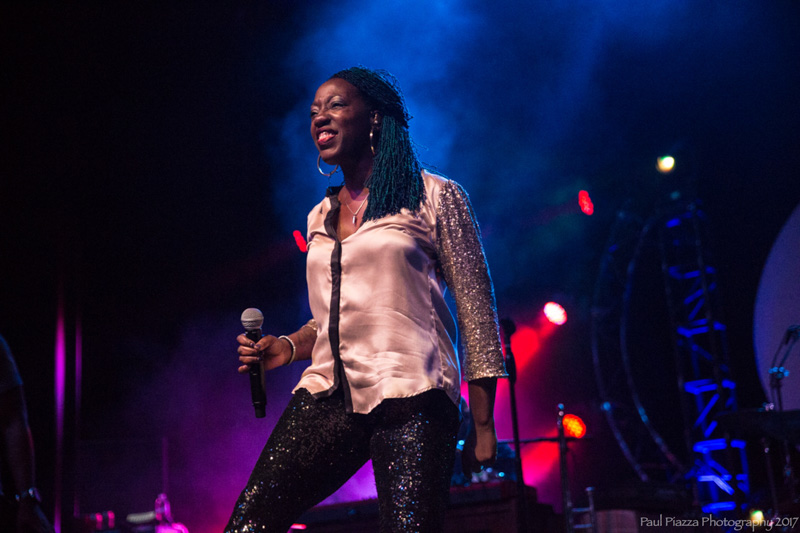 Galactic dissected and reconstructed complex instrumentals, with each of the players taking leads and passing the torch so the next Galactian could try to ‘one up’ them. Blasting out horn-driven funkified jams such as ‘Blackbird Special’ and hybrid instrumentals/covers such as ‘Paid in Full’ (with Henry breaking off a spot on rendition of Rakim’s rhyme skills), the set was sent into hyper-drive when singer Erica Falls took center stage.

Falls’ growth with the band has been remarkable, and is very evident for those who have seen Galactic from year to year. When she first started performing with them, her description as a ‘guest’ was accurate. She would come on stage for a couple of songs, and her resonant voice on top of the instrumental mastery was a nice change of pace. 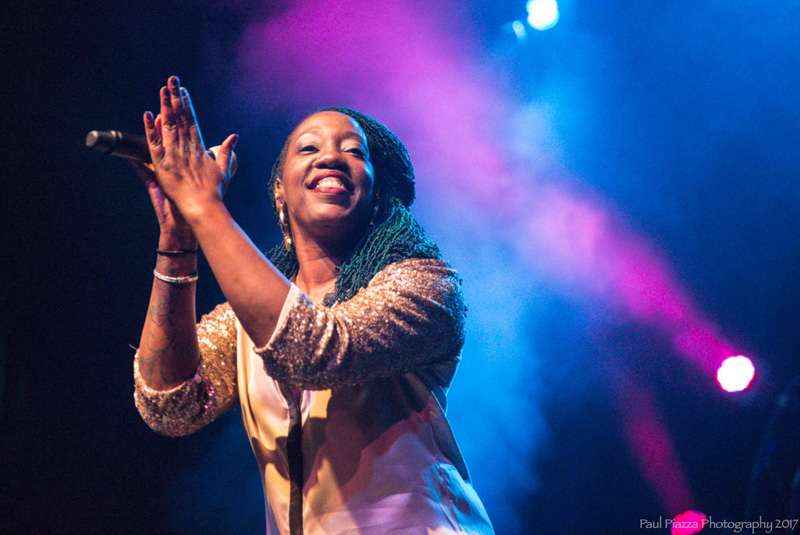 Fast-forward to the present day and it is now evident that Falls is an emerging star in her own right. Her voice is just as powerful as it has ever been, but she is much more confident in the material and the way she delivers her vocals. Correspondingly she is on stage much more, and the crowd at the Warfield was extremely receptive to her performance.

This synergy between the Galactic band members, Falls, and the crowd was apparent from the outset and came to a rolling boil with ‘Right On’ (Into The Deep – 2015). Beginning with Ellison’s sax coaxing the vocals and band to come alive, Falls called for the crowd to follow her lead (“Clap, Clap, Clap…”). Cheering her on as the band leaned into the song and the volume swelled, the audience reacted in time to her call and response. This exchange served as a springboard for the rest of the show, taking the energy to the next level. 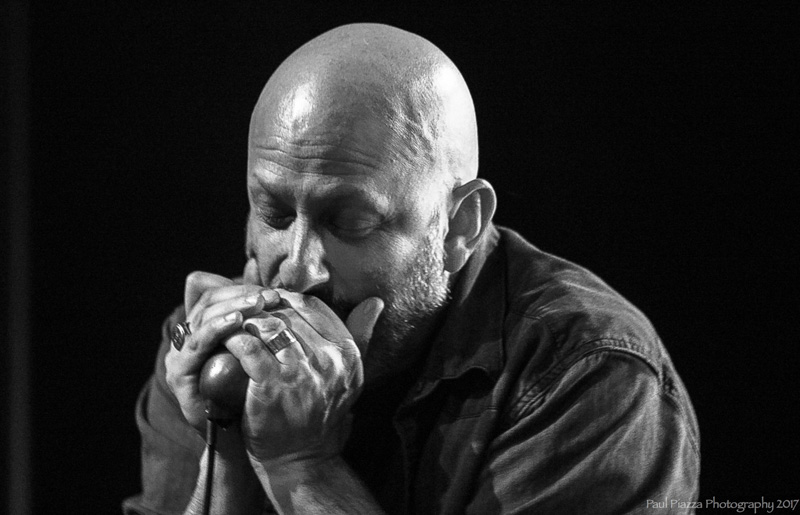 On ‘Hey Na Na’ (Carnivale Electricos – 2012) the reciprocation celebration continued…the band generating the static energy that sparked the crowd, Falls commanding the attention, and the crowd combusting in movement and shouts.

Every so often the set had to take a deep breath before diving deeper. But these moments such as the Falls killing it on the epic cover of Bob Dylan’s ‘Like a Rolling Stone’ just served as an opportunity to savor the moment before the Galactic storm kicked off again with musical thunder and kinetic lightning whirling around the Warfield. 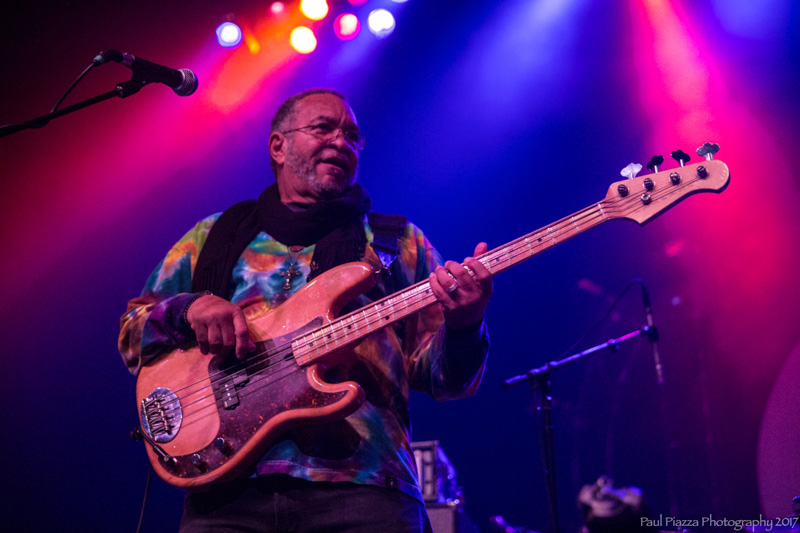 Funky Meters fired up the stage and raised the funk flag high before Galactic took the ball and ran. It was an absolute pleasure to see some of the forefathers of New Orleans funk-rock-jazz in their element. The quartet featuring original Meters members Art Neville (keyboards) and George Porter Jr. (bass) alongside Brian Stoltz (guitar) and  Terrence Houston (drums) ran through a number of Meters classics to the immense enjoyment of the crowd.

The Funky Meters set was highlighted by outstanding performances of “Cissy Strut” (which is covered by numerous bands including Galactic), “Africa” (featuring some mighty tasty organ and vocals by Neville), and the swampy funk-zydeco anthem “Fire on the Bayou,” with its churning groove and Porter Jr’s bass and raspy soulful vocals. But it was when the quartet played a cover of the Jimi Hendrix tune ‘Voodoo Child’ the set really took flight on the wings of soaring leads ripped off by Stoltz. 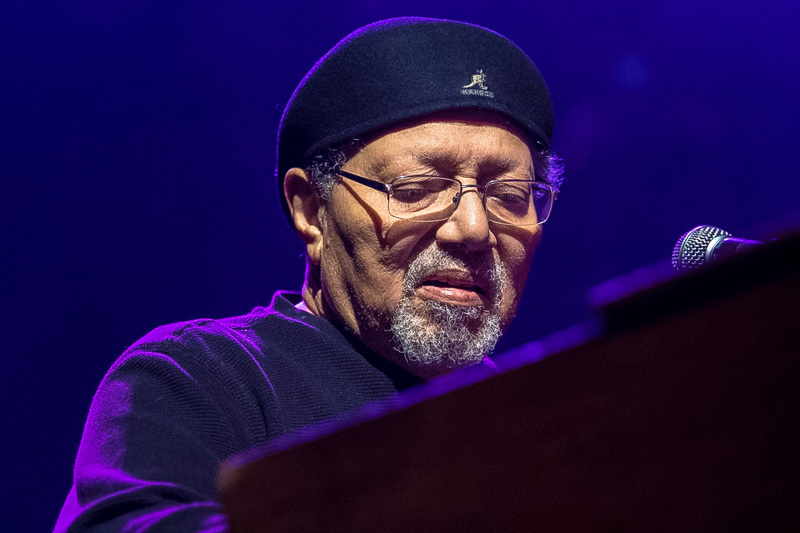 It was a treat for all to experience the history of funk from its roots to the current day and see the genre still pushing the envelope and spreading its influence. After all the remedy is to come together to get funked up. Mission accomplished on this night at the Warfield….all funked up!

Find out more about Galactic here.