Marching into Petaluma’s Mystic Theatre in full-on Fishbone soldier garb, Angelo Moore wore a commander’s uniform as his 51st birthday suit the night of November 5th. Listeners, or the “familyhood,” gathered in the classic auditorium for a memorable show. Just days before a grim election, listeners were taken on a chaotic journey through the harsh realities of racism and consumerism from the perspective of Chim Chim’s Badass Revenge, Fishbone’s 1996 concept album that was created to exorcise the bands demons. 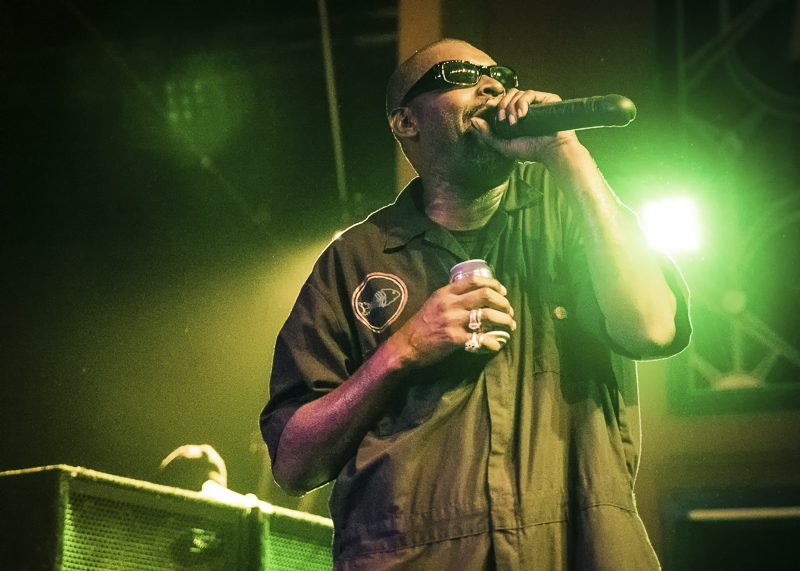 Fishbone decided to go on a tour of the album to conclude the Year of the Monkey 20 years after their release. “I didn’t even think about how long ago it’s been since Chim Chim’s Badass Revenge. I was like, ‘Oh shit! It’s year of the Monkey, and it’s almost over, we better do somethin’!,’ ” said Norwood Fisher with robust laughter. Referring to the album he said, “It was meant to be underground. That was written for the hardcore fan.” 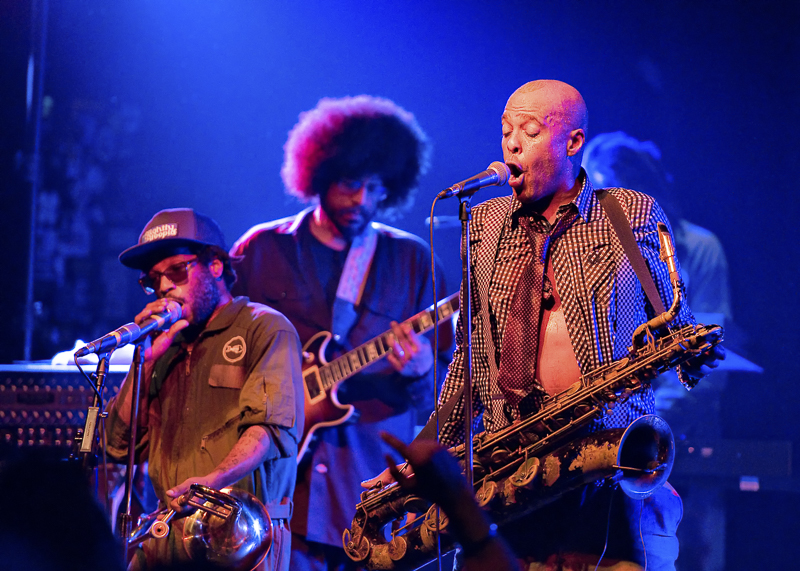 Fishbone opened the set with three songs to warm up the crowd before we got into the imaginative psychological experience of Chim Chim. Wearing a beige suit, Angelo dressed to impress on his birthday. The band were dressed per usual, drummer John Steward wore the band’s iconic “Fuck Racism” shirt, guitarist Rocky George was in all black, and Flying Jay (trombone), Norwood Fisher (bass), Walter Kibby (trumpet/vocals – aka Dirty Walt), and keyboardist Paul Hampton rocked Fishbone jumpsuits. “Forever Moore” started the night, harmonizing with a shower of honks and melodic brass tones from Flying Jay and Moore. 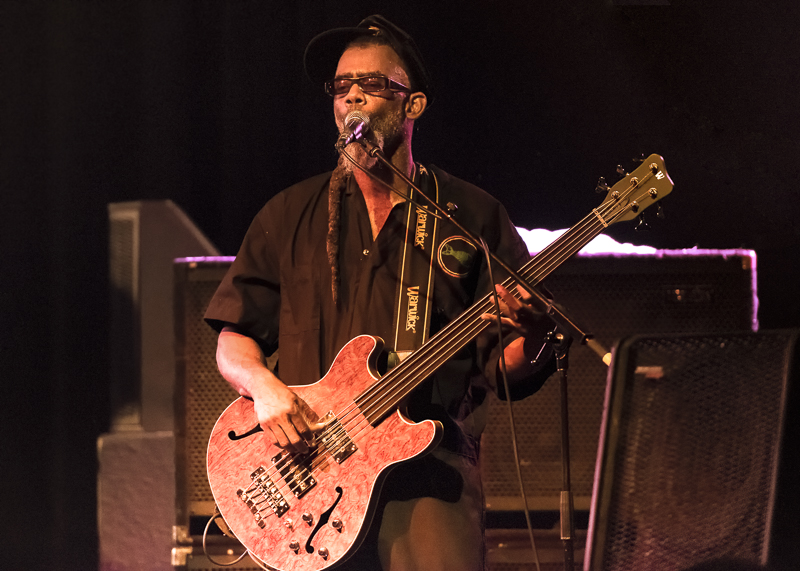 “The Suffering” tells a tale of being swept into puppy love land which spoiled over time, “My my, she sucked me dry. Now the hoochie mama wanna say bye bye!” Moore sang over a brassy jam rock groove. Sweetening the set, Fishbone covered “The Goose” by Funkadelic. The cover, led by Dirty Walt, took us on a psychedelic ride, “Ohh, ah, baby you’re so sweet!” Kibby and Moore harmonized together as the speed accelerated to mothership speed. 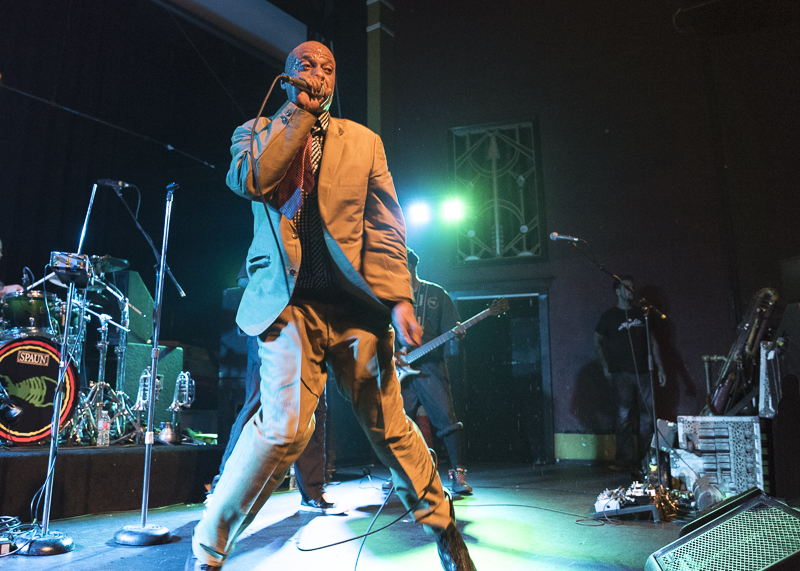 The band rallied into “Chim Chim’s Badass Revenge”, the album’s vengeful anthem introduces our central character, infuriated monkey Chim Chim, a throwback to the Speed Racer’s family pet who they pretend is their equal by dressing him and letting him sit at the table. Despite this, he is treated as if he has no rights—the monkey salutes his masters. Chim Chim repeats the moves of Spridal, Speed’s brother, and is controlled by the racing family, he is an archetype for repressed people, a cartoon who Fishbone portray on the explosive rampage of retaliation.

“They call us monkeys. If I’m gonna be that monkey, I’m raising hell,” added Fisher. 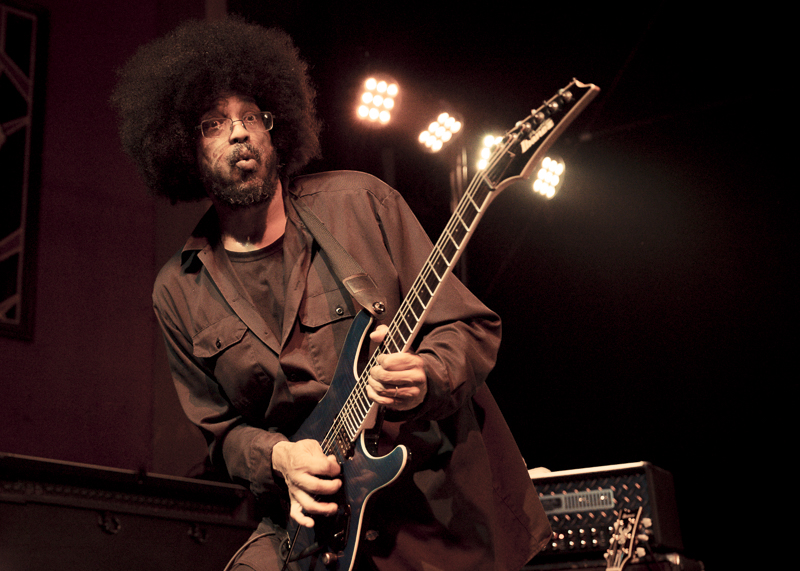 Chim Chim takes the family hostage, holds up the bank, blocks the sewer, drains the gas tank, breaks the rules, ignores the signals and runs the stop signs all for a piece of mind. Moore’s Theremin electrifies the song, swirling among the sound of raging guitars, his arms twirled as he very seriously stroked the air while letting his limbs fly and head bang. 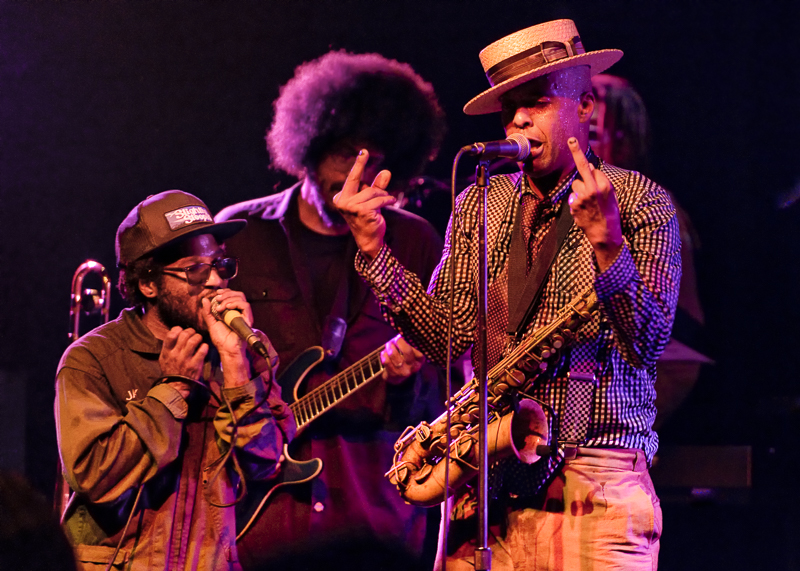 “In The Cube” is a song almost everyone can relate to. It’s somewhat mellow and skankable beat speeds up as Moore’s lyrics do. Everyone’s been stuck in a shitty situation or by suffocating surroundings. The cube could be seen in many lights: a prison cell, an office cubical or a toilet stall. Various people realize how greedy the leaders of the world are as well as how society creates norms pigeonholing individual’s lives. The audience found tranquility bonding over the chance to hear concept album live so far, especially when the song “got real”, “God made the devil, but the devil makes us weak sometimes. So are we fighting against a part of God, or is a part of God’s creation lying?” Sensibly, daily life can be justly referred to as prison. 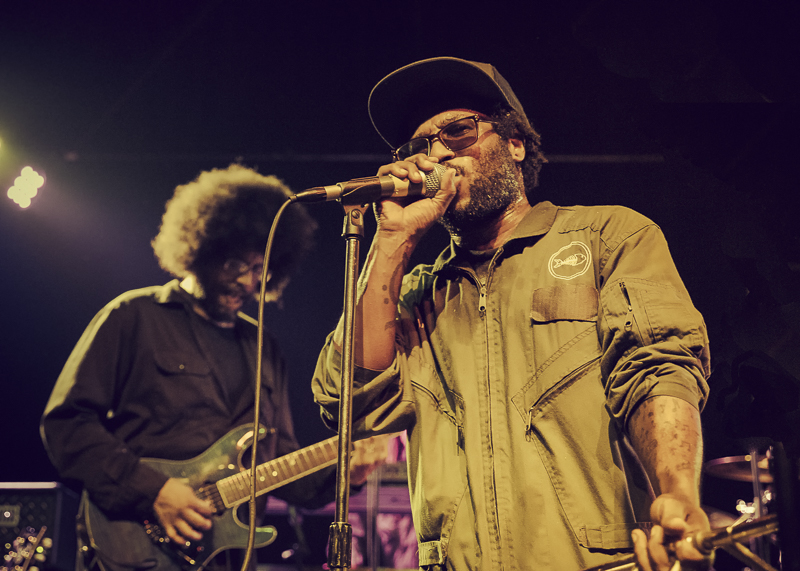 Next, “This one’s for the one we call BEERGUT!” screamed Moore. We got a taste of Beergut, he hopped on stage, banged his head while licking the air and belly flopped off! The crowd didn’t catch him and he slammed to the ground. “They are supposed to catch you!” Moore emphasized. A few moments later Moore showed him how it’s done. Experienced swimmer Moore dove into the surprisingly oceanic crowd while holding and singing into his plugged in microphone. The venue seemed so much larger at this moment. 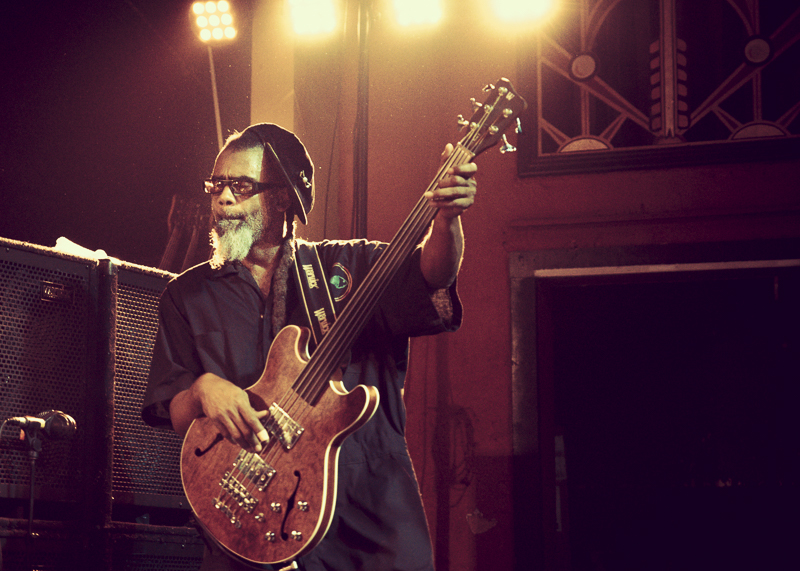 Among all of this, lost track of how many times Norwood changed his bass. Several basses hit the set. Dirty Walt’s dick shaped microphone kept everyone entertained. Moore’s brass collection blew everyone away. He plays all saxophone types on stage and more! Musically speaking, Fishbone is heavily equipped sounding like a full-blown marching band in seven members. 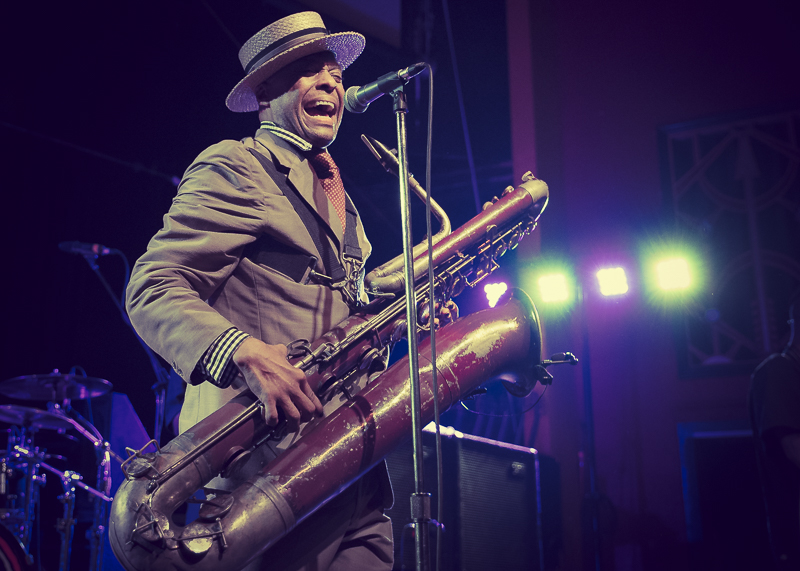 Spoken word and interludes were not missed. Listeners grinned ear to ear as they tuned into Moore’s poetic flows. “Chim Chim could be restrained no longer…” 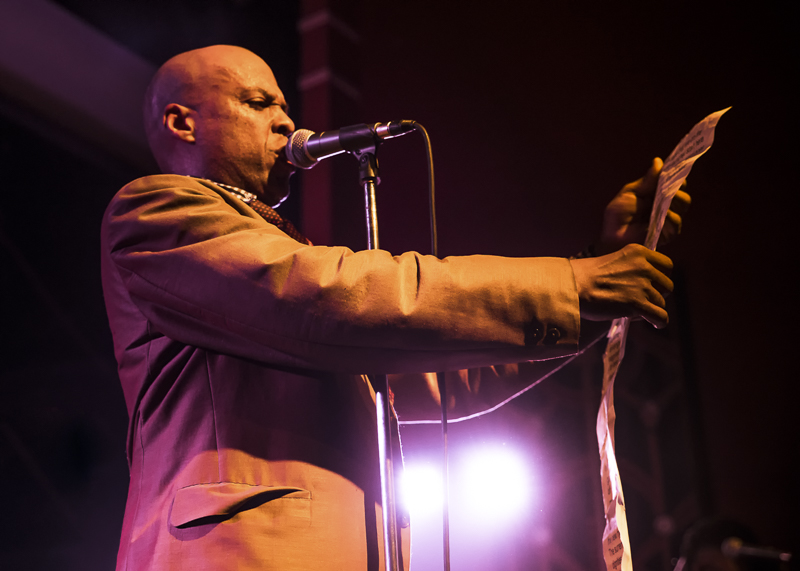 “Alcoholic” has a soothing bass groove, which made the audience sway back and forth. The album’s highlight song synchronizes audience “Ohhhhs” while the down tempo bass lulls the crowd into a stumbling winos perspective. Of course it wasn’t a serene tune for long! It’s a song about a raging alcoholic! Slam dancing was constantly revived with every accelerated step. This vibe continued through their song, “Love…Hate” which opens our minds to the depth of the relationship between love and hate. They emphasize that love and hate relate, they invoke just as extreme feelings in an opposing way. 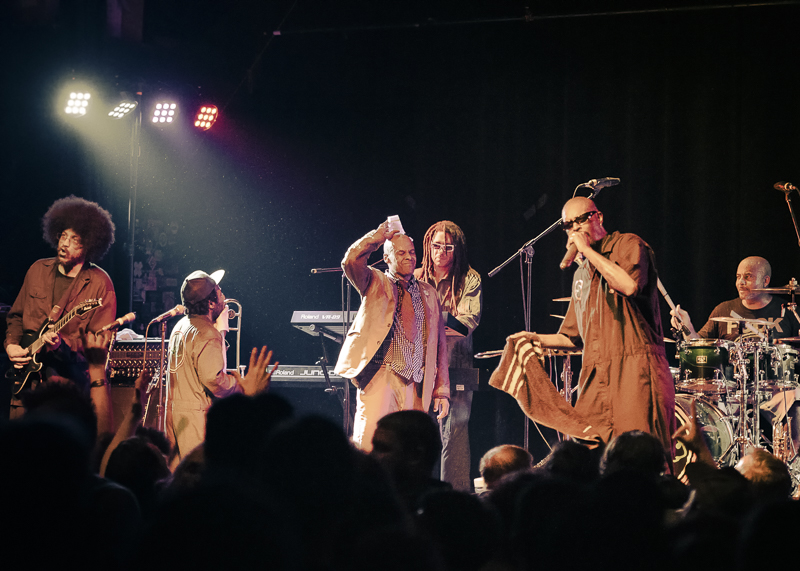 A truly extraordinary band of badass talent, Fishbone’s mission is to stir things up and awaken listeners – it’s been time for action addressing frustration, to inspire the realization that humanity is fed up. The first step is to wake people up! Chim Chim draws that attention and not a single song is calm. The slam dancing was furious during the bands short song “Riot.” People of all ages slam dance with Fishbone. A Fishbone soldier out on the field claimed he would “slam dance in [his]walker.” 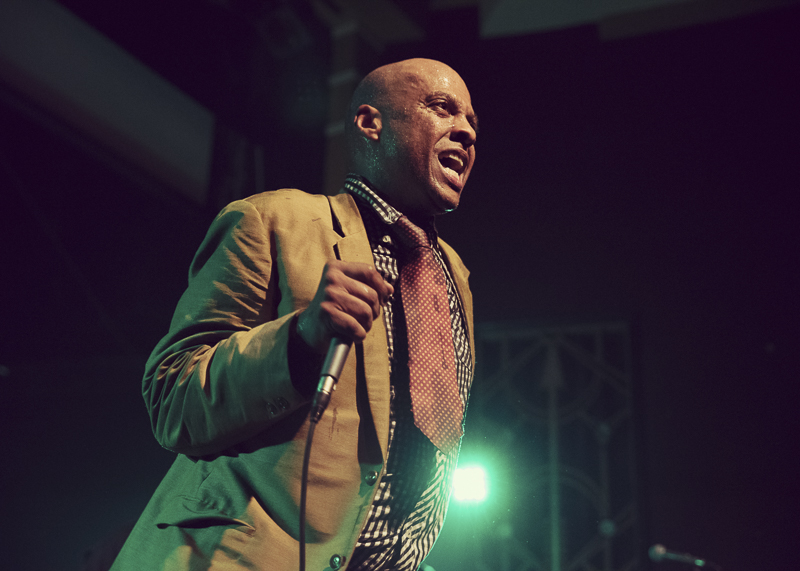 “Monkey Dick” is a hilarious song about the yearning for freedom with burning side effects felt by Chim Chim. He is not very hygienic in his caged situation. Fluid in transitions, “Monkey Dick” was followed by “Sourpuss,” probably the softest song on the album, though it is still rich, comedic and energized—Fishbone are always picking up the pace. The guys harmonized “Oh, what a sourpuss… nothing but a sourpuss…” 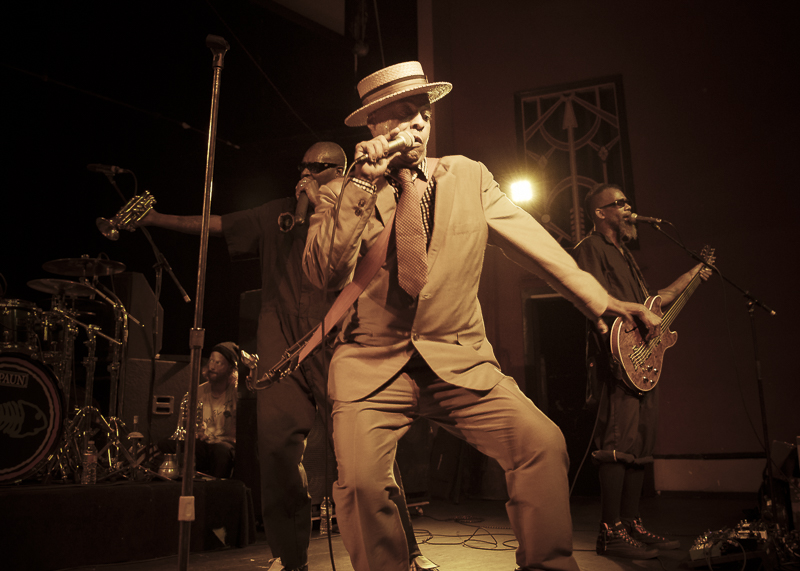 “We’re gonna singe a Black History lesson in music,” said Moore. Next, things amplified. A harsh reality, “Rock Star” vouches for white corporate domination in the music industry. Roaring guitar licks swirled as George effortlessly strummed. The price of fame is high. Fishbone avoid investing in the slave structure of popular music, which tends to exploit every participant. “I guess you can say I’m an angry brother!” screamed Norwood or Walt. Angry brothers and sisters united in head banging and slam dancing to the number. Angelo stripped his clothing off and posed with peace signs like a genuinely jacked up “Rock Star.” 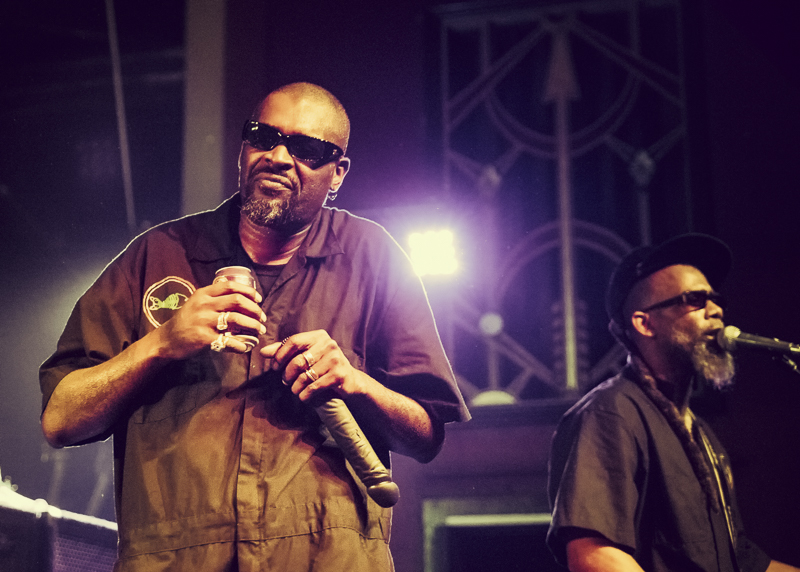 By the end of the show, Moore went from his spruced up tux to being shirtless in his suspenders while dripping with sweat. 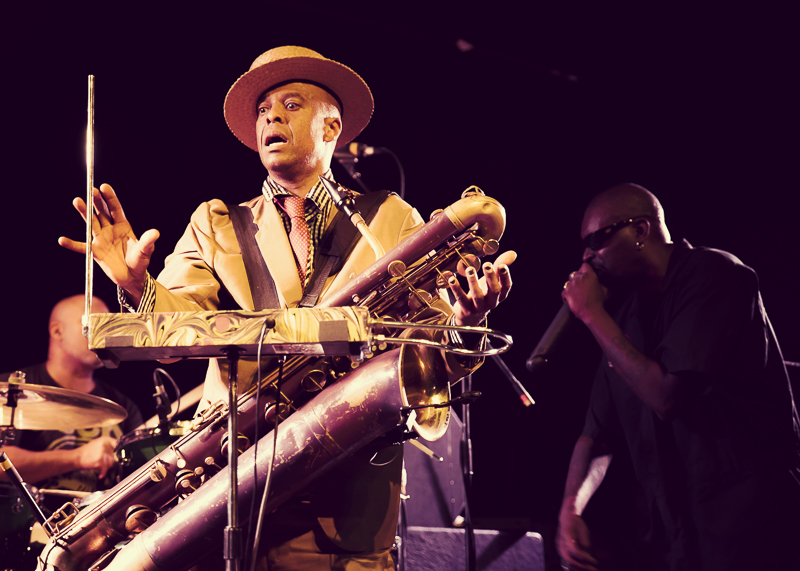 We got our “Pre Nut” on, the spacey introduction consists of loose words and beautiful shouts… “Pre Nut” builds up to a grand finale. “Fight For the Nutmeg” is a thematic anthem demanding peace during a time when LA was going off in the 90s. Riots broke out in the neighborhood. With a classic cyclical guitar riff, the band sings “You’ve got to fight, fight!” The drums cymbals clash, and roll into “Listen to the messages… The time is now to free the beast!” Brass showers the air, hair was flying and limbs sailed with the horns tune. Entranced, the crowd was going wild to this song for 10 minutes. War cries! Screams! Whistles! The crowd wasn’t ready for it to end. This song represents the Fishbone sound as a whole. 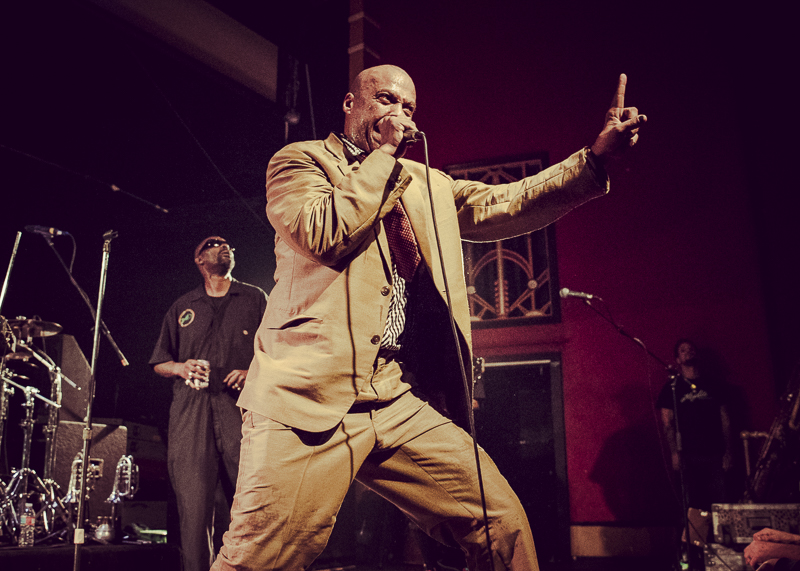 Someone in the crowd looked very happy, though she asked “What about Party At Ground Zero” and all of that. Familyhood explained it was more of a focused album show, though the band had an encore ready. Preparing for the election, “Unyielding Conditioning” reveals the truth behind what is being projected onto the masses. Moore introduced the song saying, “Music is the answer to everything. Any language… music and art are the answer to your prayers. Listen to and write lyrics to music everyday!” He then shook a ton of hands. 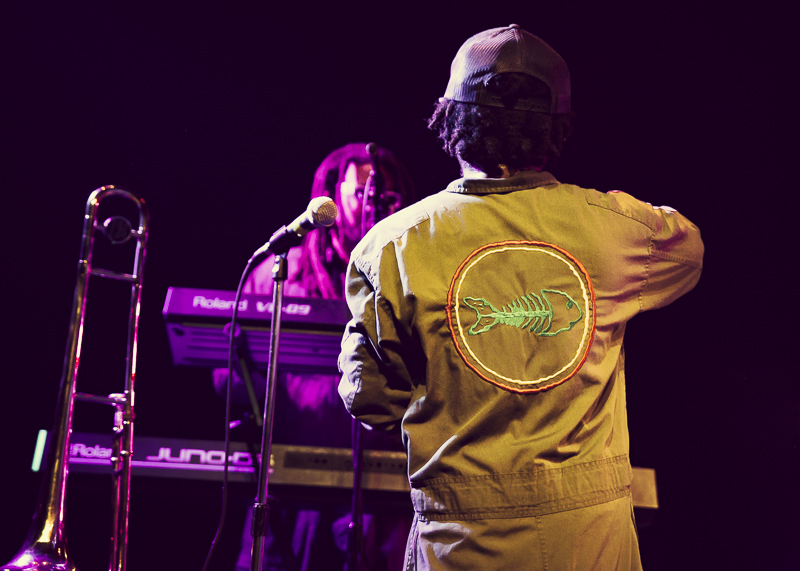 Next, we partied till we nearly died for “Party At Ground Zero” when Moore busted out a kazoo. He reminded us after the party to get a “Fuck Racism” T-Shirt. When Flying Jay was at the merch booth he said the tour is “Fun, though it’s tiring. I need to go smoke these blunts in my pocket.” Then he gestures to someone who inquired about a signed t-shirt and asked them to find him a Sharpie. Their shirts were selling fast!