Fishbone, the fantastic, iconic, neurotic, schizophrenic, and immensely influential band from southern California took over The Independent in San Francisco on a cold Saturday night with an energetic performance that reinforced their reputation as a remarkable live act, and tested the stamina of their fans. 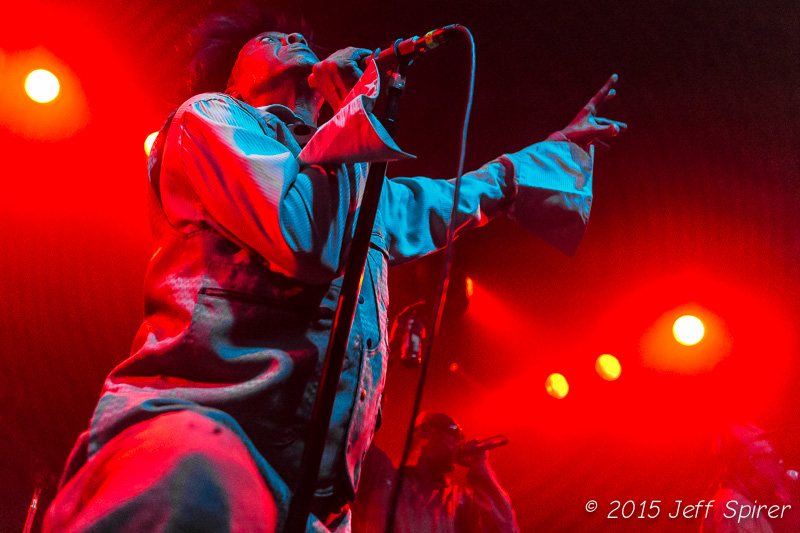 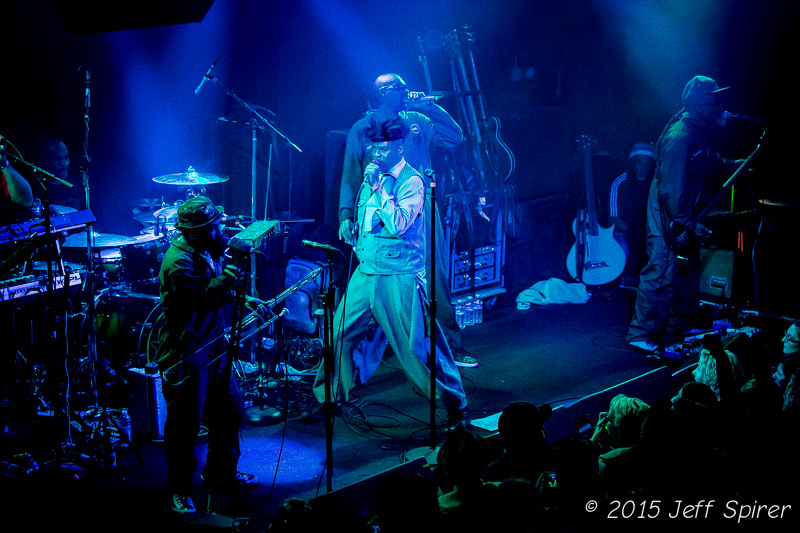 Though they arguably have more flavors in their musical stew than any other band on earth, and are widely critically acclaimed, Fishbone has never attained the commercial success of acts they have influenced like The Red Hot Chili Peppers, System of a Down, and Jane’s Addiction. 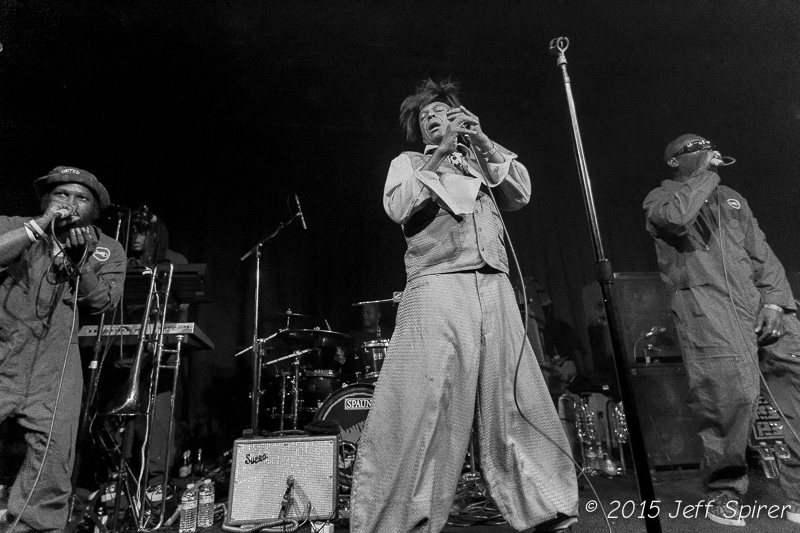 None of that mattered as their diehard fans braved the cold by lining up on Divisadero, waiting to fill The Independent. Little did they know that they would bear witness to a three-hour set from the funk/punk/ska/rock/soul/metal outfit that would more than warm the room. Despite not having released a full-length studio album in almost ten years (there have been recent EPs), Angelo, Norwood and bandmates ‘Dirty’ Walter Kibby (trumpet/vox), Jay Armant (trombone/vox), John Steward (drums), Rocky George (guitars), and Paul Hampton (keys), still cranked out a 26-song set that reached all the way back to their 1985 recording debut. 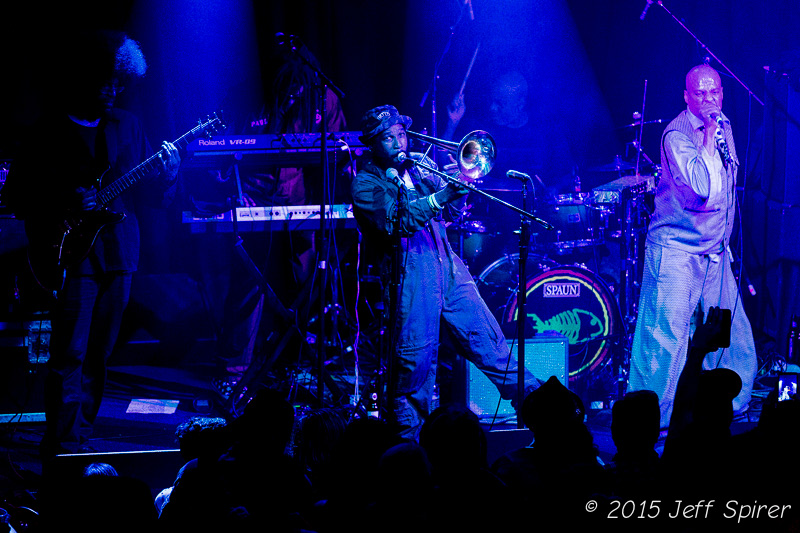 Upon taking the stage, Angelo transformed into his Dr. Madd Vibe alter ego. Wearing baggy ‘genie’ styled pants, he started into a rambling spoken word free style, saying “You know, I can see more clearly from the second story window.” His discourse ended by asking “Who do you serve?” which triggered the set opener ‘Servitude.’ The crowd was immediately mesmerized and propelled into motion whether they wanted it or not. 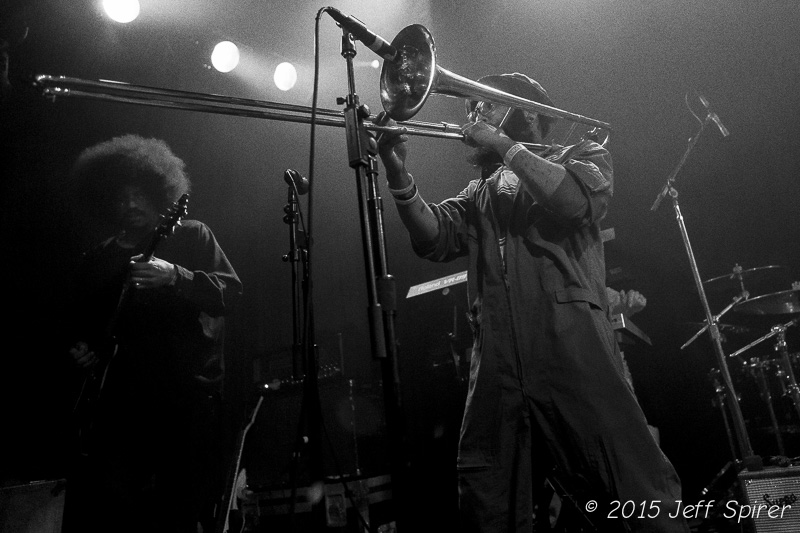 Fishbone proceeded to expertly carve, grind, and Ollie between styles for the remainder of their elongated set….flexing their musical muscles at every stop along the way. They pumped up their rock chops on ‘Sunless Saturday’, and floated through the feel good gospel/soul inspired ‘Everyday Sunshine’ They played covers, including superb versions of Curtis Mayfield’s ‘Freddie’s Dead’, (metallic guitar heaped on top of Norwood’s funk fueled bass lines) and Sublime’s ‘Date Rape’ (punctuated by Rocky George’s skank-style guitar strumming,). They even hammered on a few bars of ‘Institutionalized’ by the Suicidal Tendencies. 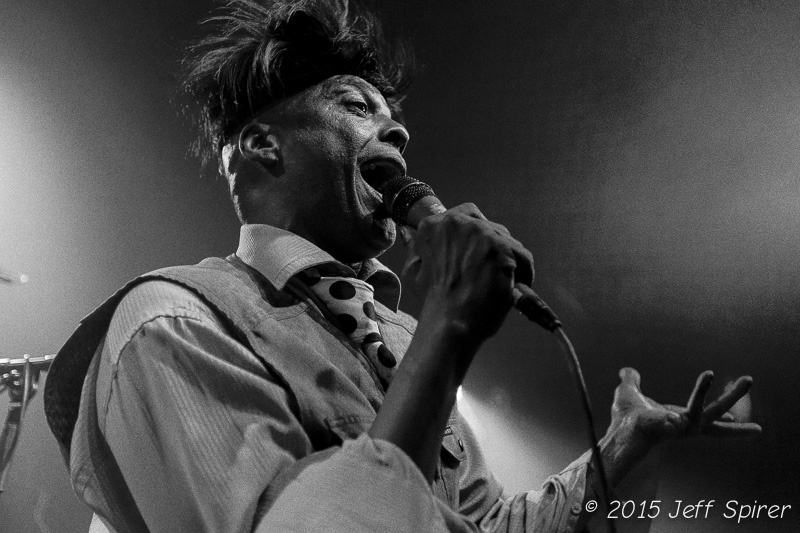 However, first and foremost there was plenty of Ska-Punk to get the crowd jumping. Wailing horns from Kibby and Armant swirled around with the soaring keys from Hampton to fire up ‘Let Dem Ho’s Fight/’ Steward’s tight funky drumming delivered the one-two party rock punch of ‘Ma and Pa’ and ‘Lyin Ass Bitch,’ sending folks into delirium. 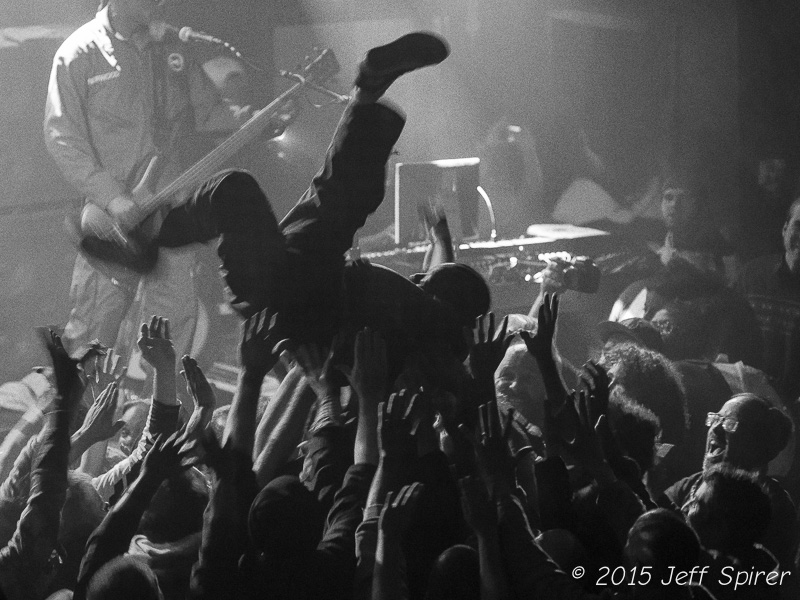 The later the night got (and it got late), the more Fishbone leaned into it. If their attitude had been a hand, Fishbone’s had its middle finger up and waving for all to see. ‘Alcoholic’ into ‘Kung-Fu Grip’ cleared a circular swath through the middle of the crowd creating a vibrant mosh pit. The next thing you know Jay Armant is surfing on top of the crowd, toward the pit and back to the stage. 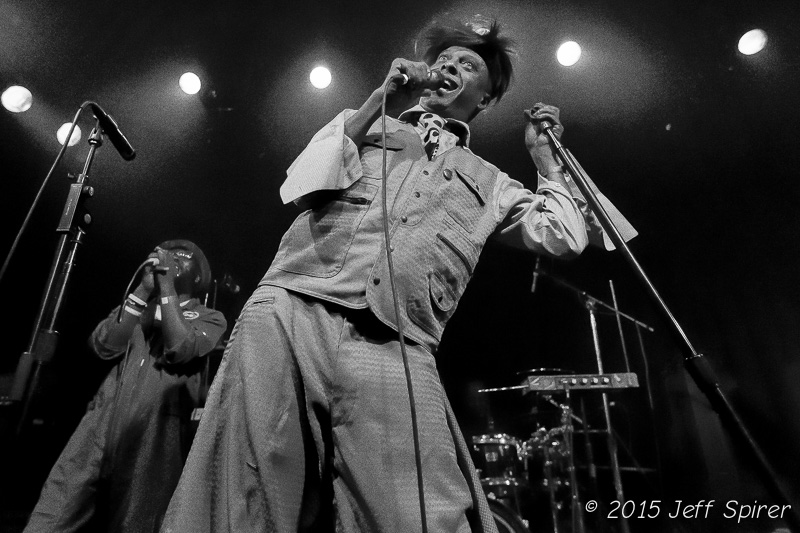 And the attitude was not confined to the music. Though he just turned 50, Angelo still carries the all of the defiance he had when he was 20. On this evening he paused to lash out against fans taking video with their phones while pointing a bright light at the band (“I don’t care if you take video, just don’t let me see that!”). He also railed against a patron who asked for his money back because he smelled pot smoke in the venue. (“You come to a Fishbone show in San Francisco and want your money back because you smell pot smoke?!! You really want your fuckin’ money back??!!”) And that was all before the encore.

As I said before, it got real late. Upon ending their regular set the band was just hitting their stride. Re-emerging for the encore, they were pushing the announcement of last call by the bar. No matter, there were more songs and more musical mayhem to be displayed. The encore magnified all the madness that preceded it.

From ‘Crazy Glue’ to ‘Suffering’ they kept everyone moving, and threatened to blow the roof off the Independent by laying down the funk of ‘The Goose’ (Parliament cover), and then coming full circle to the earliest Fishbone single….’Party At Ground Zero’ (1985). The fans let them know…”Fishbone is red hot!!”

Opening the night was Katdelic, the project of Ronkat Spearman (one of the many P-Funk alumni). They laid down thick slices of good dirty funk driven by two bass players. Honestly the bookend bass players threw me at first, but it added so much bottom end to the sound I couldn’t help but be converted. This band was good. And Ronkat, who looks like Kool Keith’s version of Black Elvis, was tearing it up on guitar and vocals with true P-Funk grace. If you want to go out to have a good time and shake a tail feather, you can’t lose with this band….they play oceans of deep funk.