After nearly a decade out of the limelight, synthcore pioneers Fischerspooner performed a provocative masterpiece recently at The Regency Ballroom in San Francisco. Looming in the darkness, frontman Casey Spooner slowly strutted toward the crowd—fully buttoned-up but soon baring all. Willfully taking in layers of thick reverb, pelvises started to gyrate, and everyone took part in one immersive, sexually-charged experience. 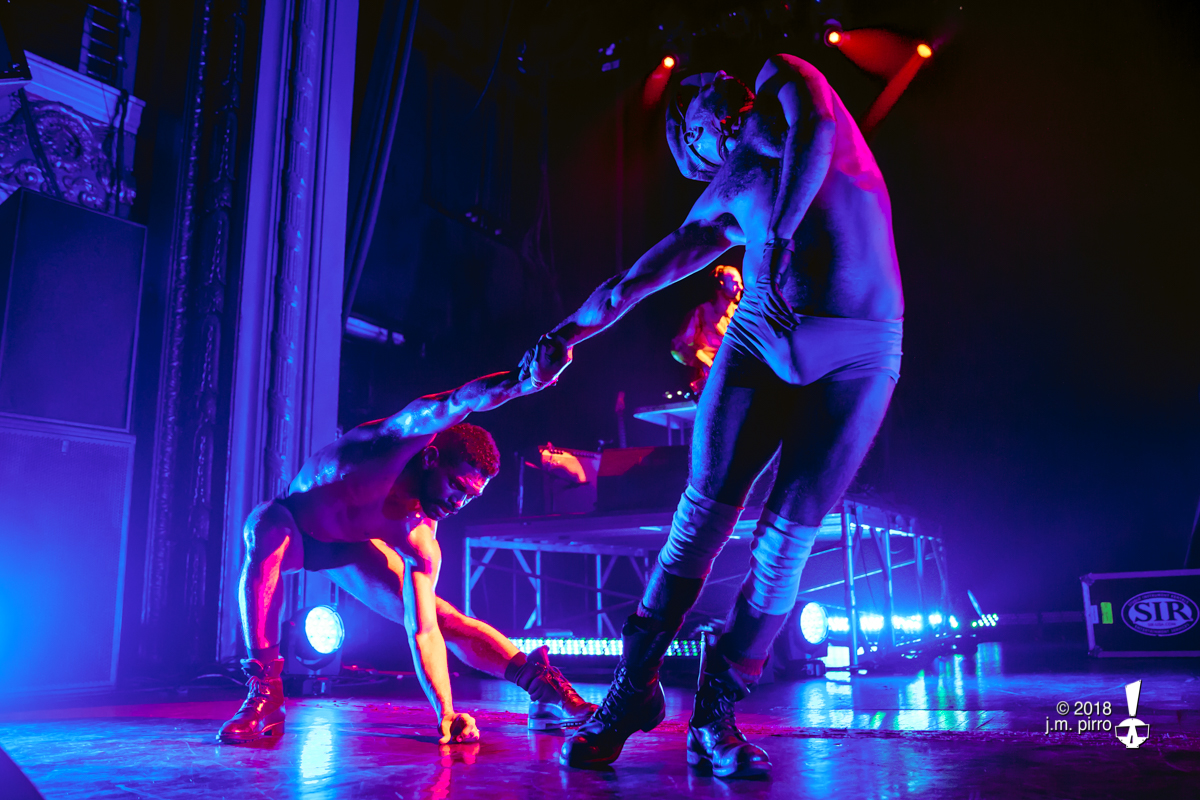 Spooner’s hauntingly seductive voice hovered over the crowd, easing everyone into the opening track, “Oh Rio,” and setting the tone for an evening of exhibitionism. Two raised stages made room for composer Warren Fischer and drummer Ian Pai. 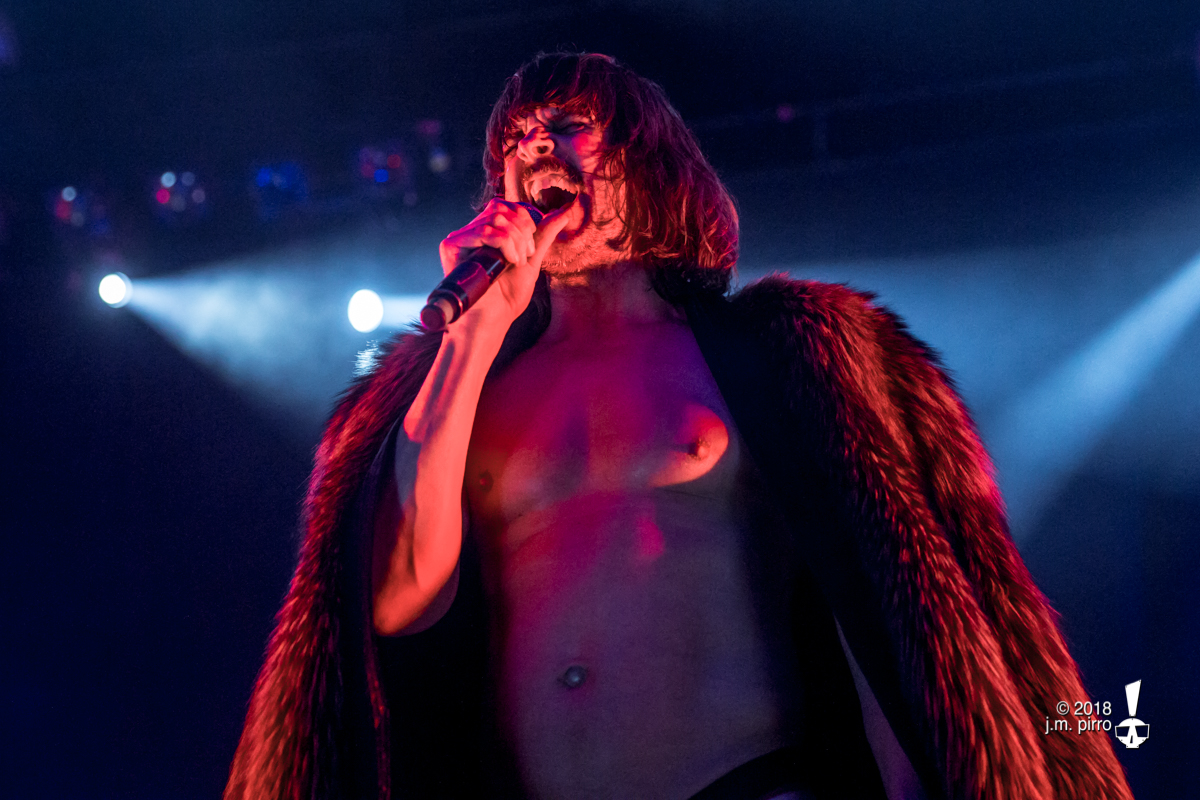 Local dancers and leather daddies played with Spooner—some showcasing interpretive dance and ballet, others flexing and sensually grinding each other on stage. Its free and feral nature rubbed off on the crowd. The more they let go, the harder they danced, and the more connected everyone felt. 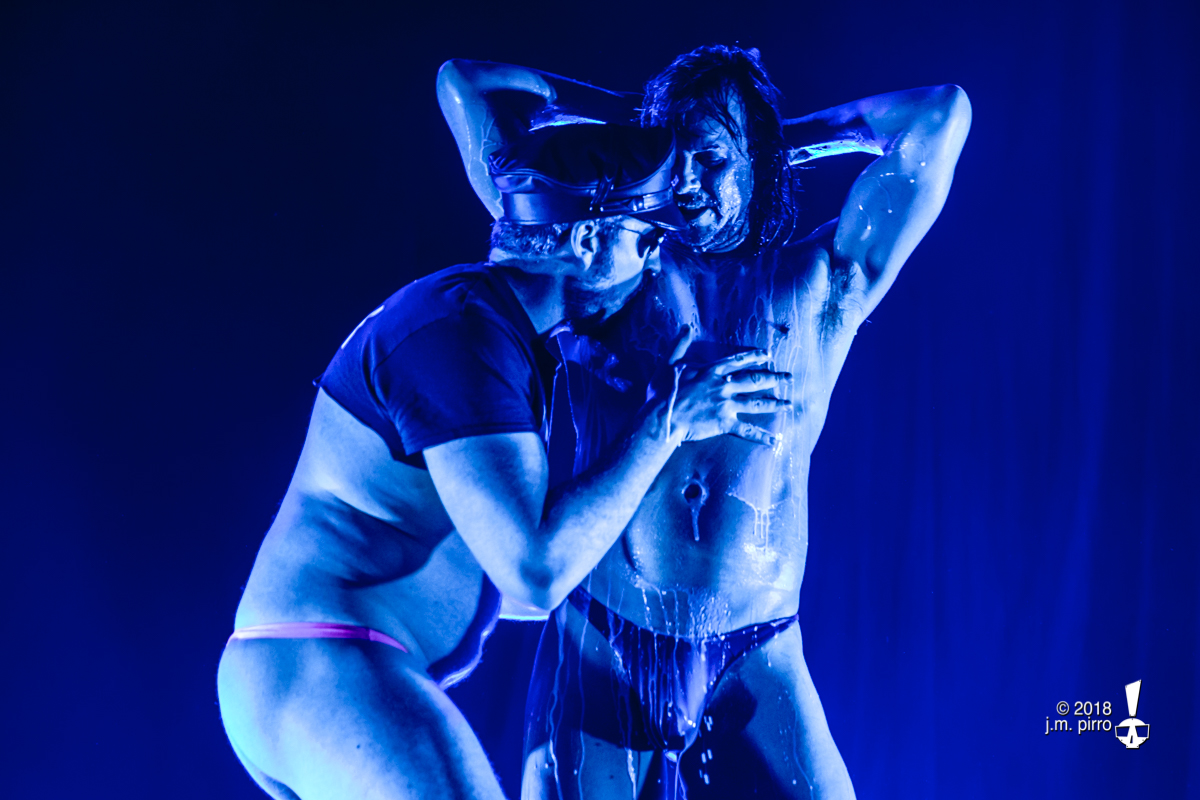 In their 30-year history, Spooner wrote gender-neutral lyrics because he wanted everyone to love it. Their newest record, however, was composed for men who love men who love men. Sir is carnal and beautiful. 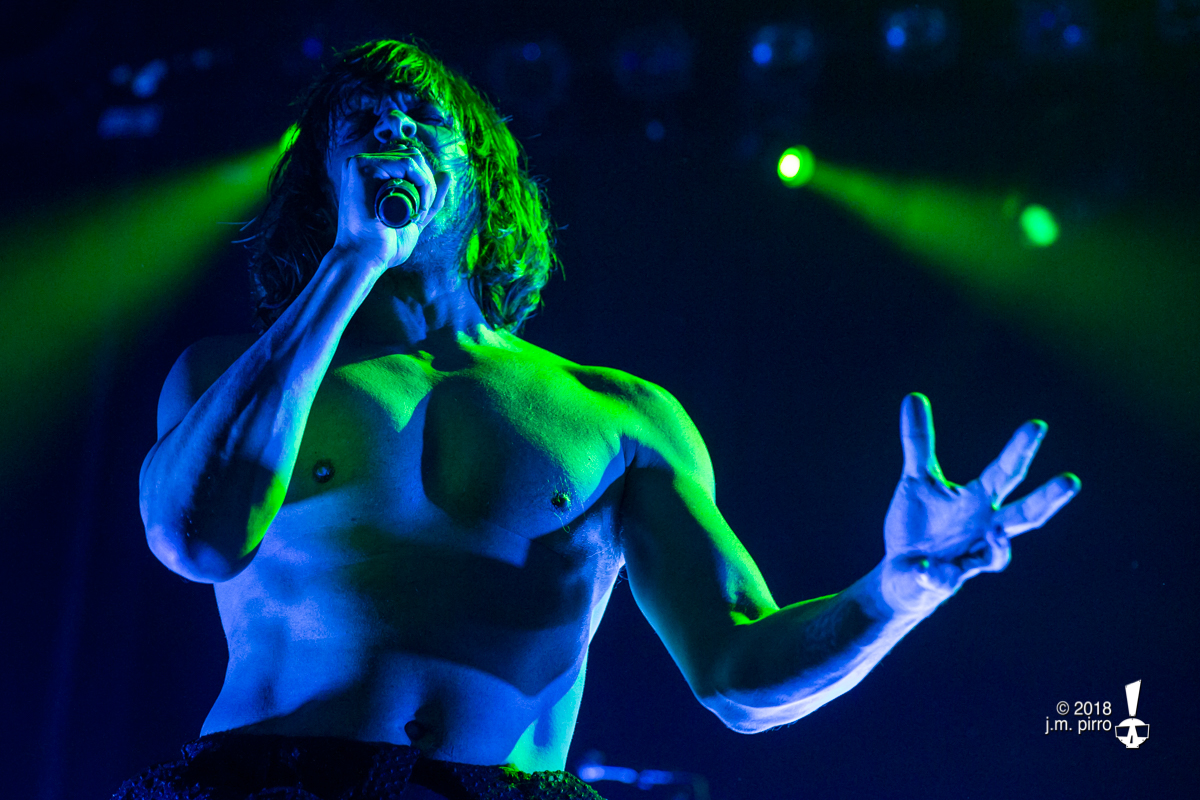 Spooner called the new album “aggressively homosexual” in a 2018 interview with Sir collaborator and R.E.M. mastermind Michael Stipe. He went on to say: “It was a revelation to me that, if you make [lyrics]vague, no one assumes you’re singing about a queer relationship. It’s always perceived as heterosexual. I wanted to make it clear that it was queer.” 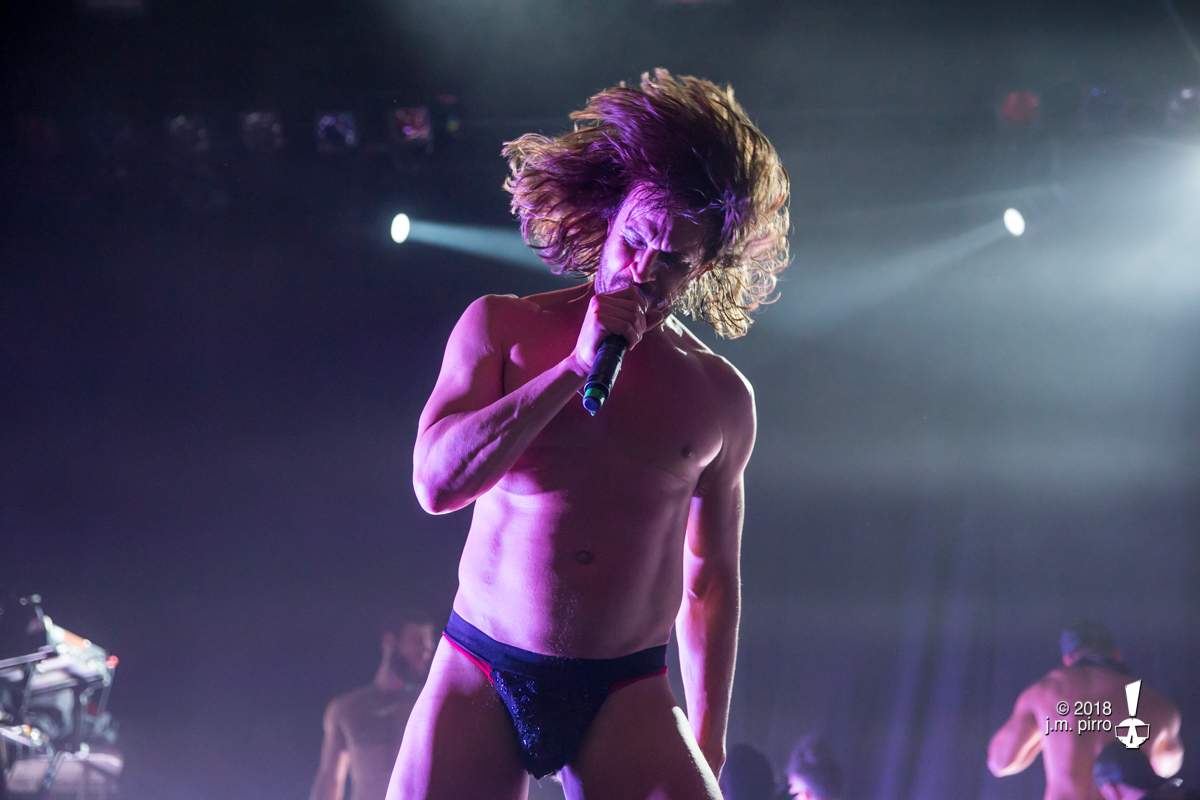 Their new electro-erotic record has a powerful and personal narrative. It details the end of Spooner’s 14-year relationship, his re-entry into a sexual playground defined by technology, and it examines the emotional and sexual turmoil he experienced with his ex-partner. 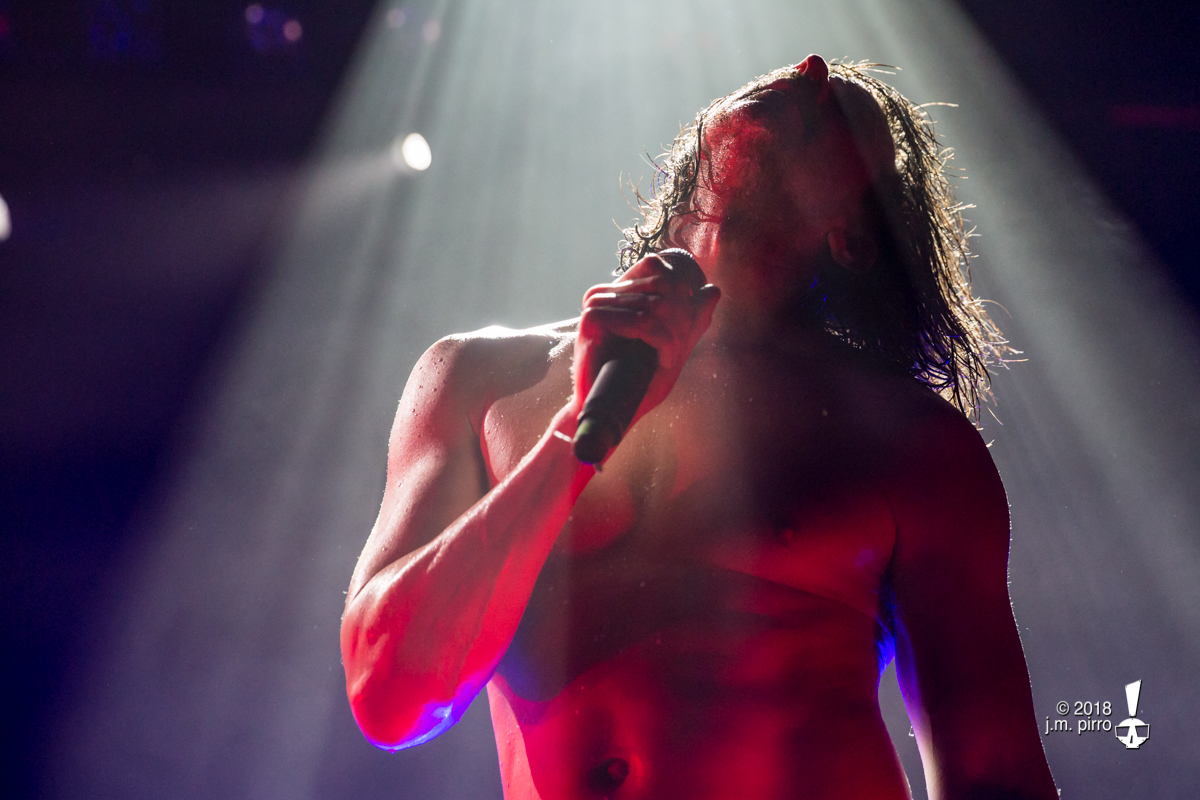 Making a comeback after a nine-year hiatus is daunting. Spooner, a video-artist and experimental theater performer, and Fischer, a classically-trained musician, became electroclash icons when they joined forces in New York in 1998. They’ve welcomed more than 20 performers into their troupe over the years and took it a step further for their comeback. Sir collaborators include Chairlift vocalist Caroline Polachek, Beyoncé and Run the Jewels collaborator Boots, Saddle Creek Records’ sound man Andy LeMaster, mega-famous engineer and mixer Stuart White, and Stipe, Spooner’s first boyfriend. 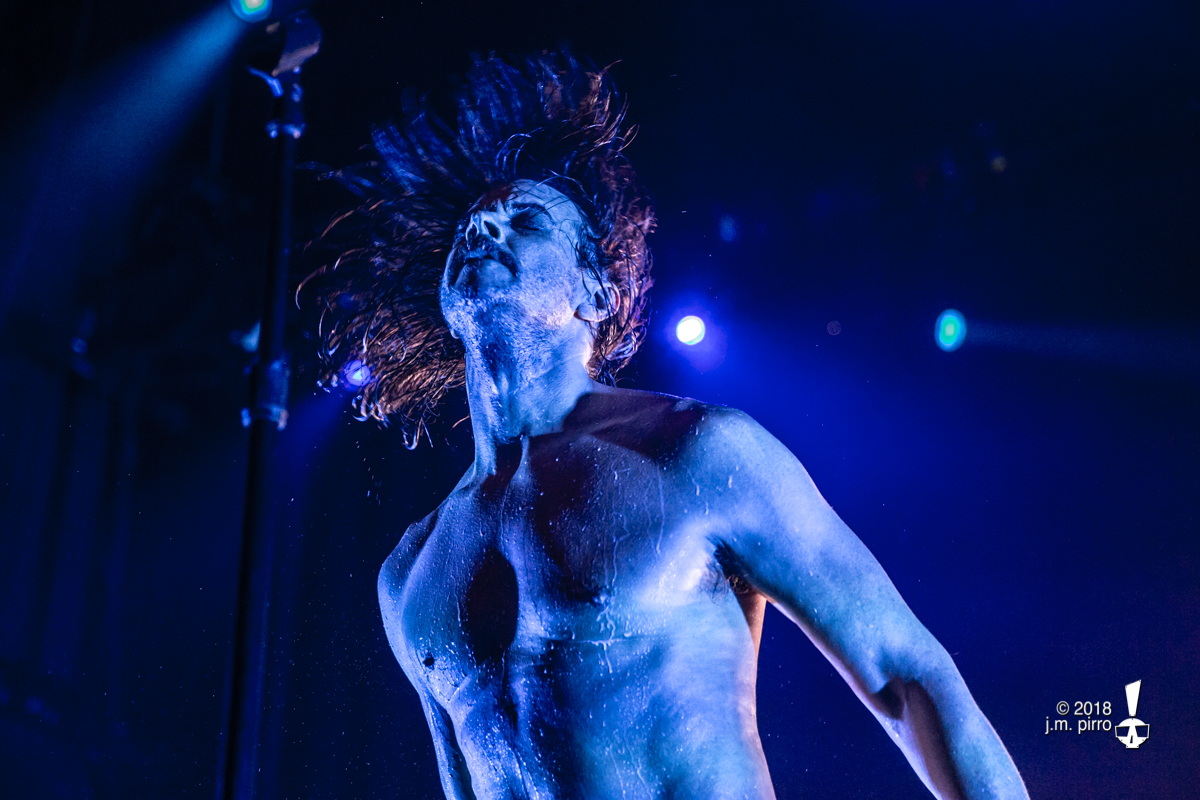 Not surprisingly, the album’s invigorating sexual transparency translated well in San Francisco. Stripped down, not toned down—Spooner’s body became his costume. Whipping his shoulder-length hair, half-naked men peeled off his clothes, one piece at a time. 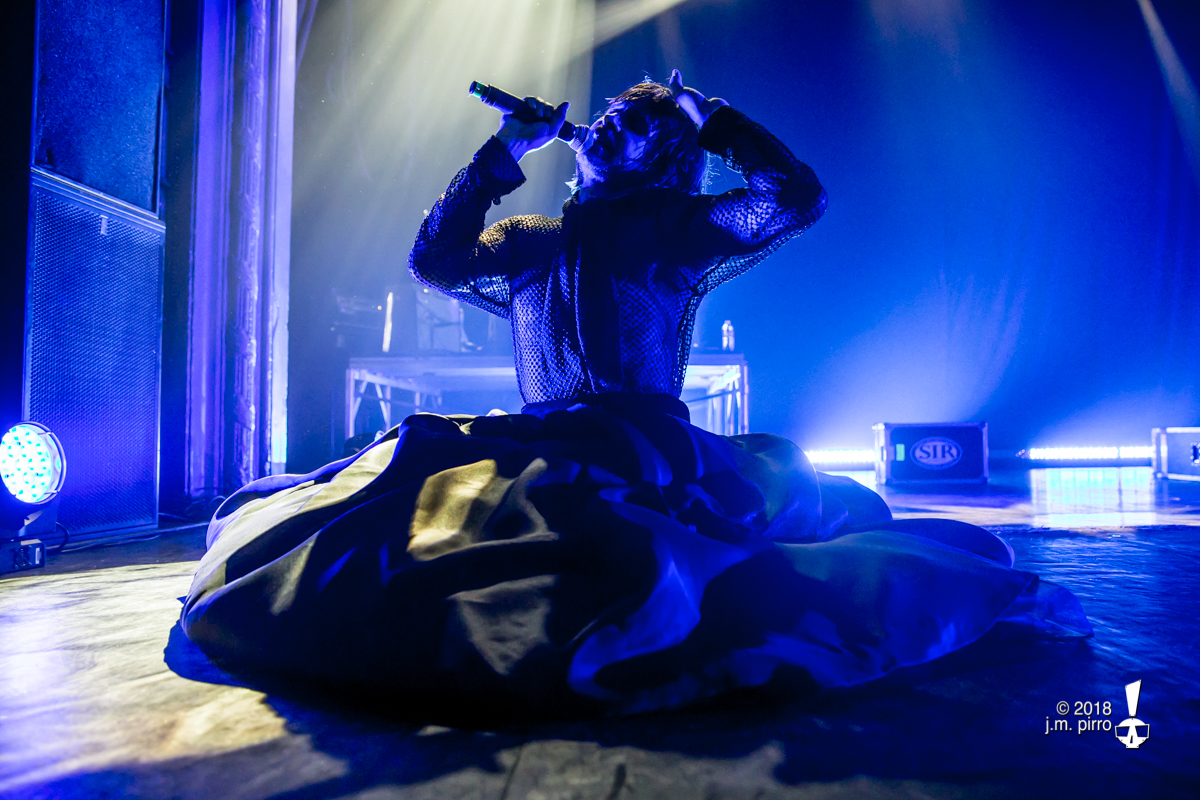 Spooner welcomed everyone into his dark, naughty fantasy land. It felt free and safe. Everywhere you looked, people smirked and swayed and after playing three tracks off Sir, people got rowdy at the start of Wire cover “The 15th.” It was the first oldie they played off their debut record #1. 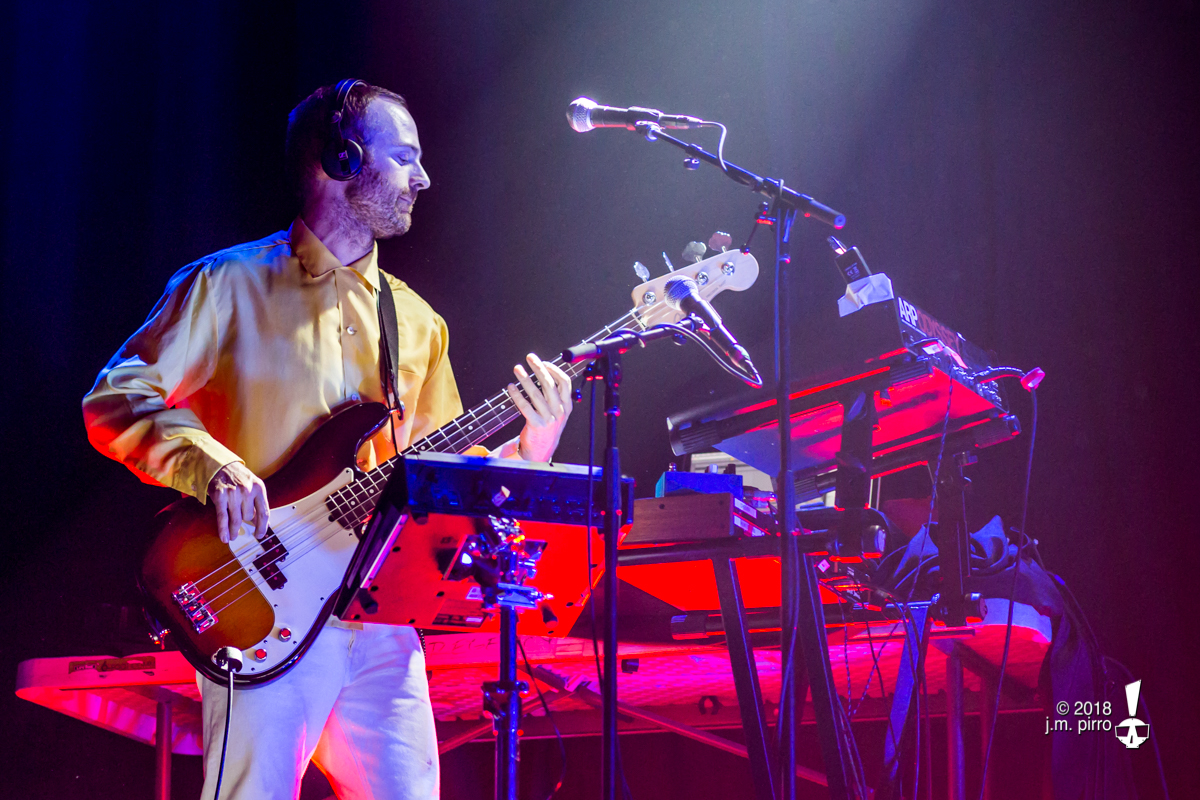 Three leather-clad men danced behind Spooner during new track “TopBrazil.” The song exudes sex, though it tells the story of a bad hookup between Spooner and a man who donned a profile name in which the song is named after. 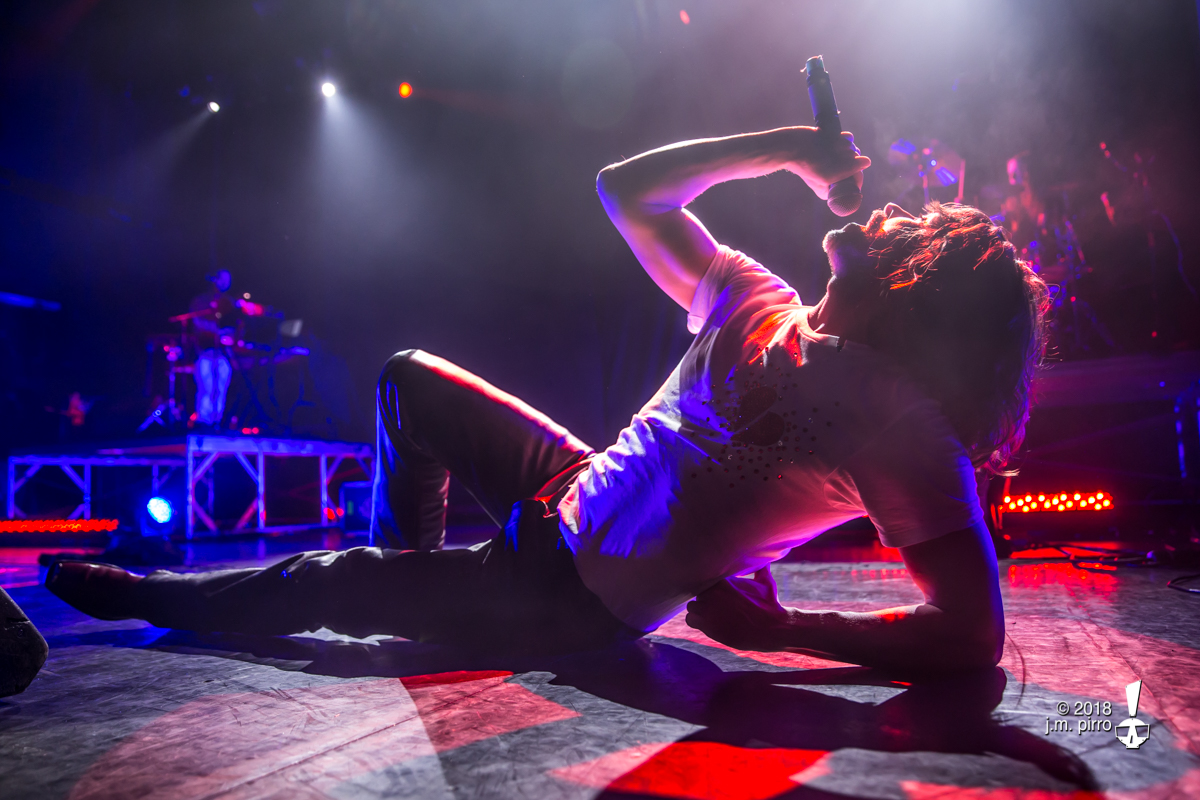 It was the perfect track before Spooner teased the crowd with a familiar synth line. By the time “Hypermediocrity” left his mouth, he cut their most popular hit, “Emerge,” and jumped right into “Never Win” off their 2005 album Odyssey. The electro-pop track got people singing, clapping, and dancing in circles. 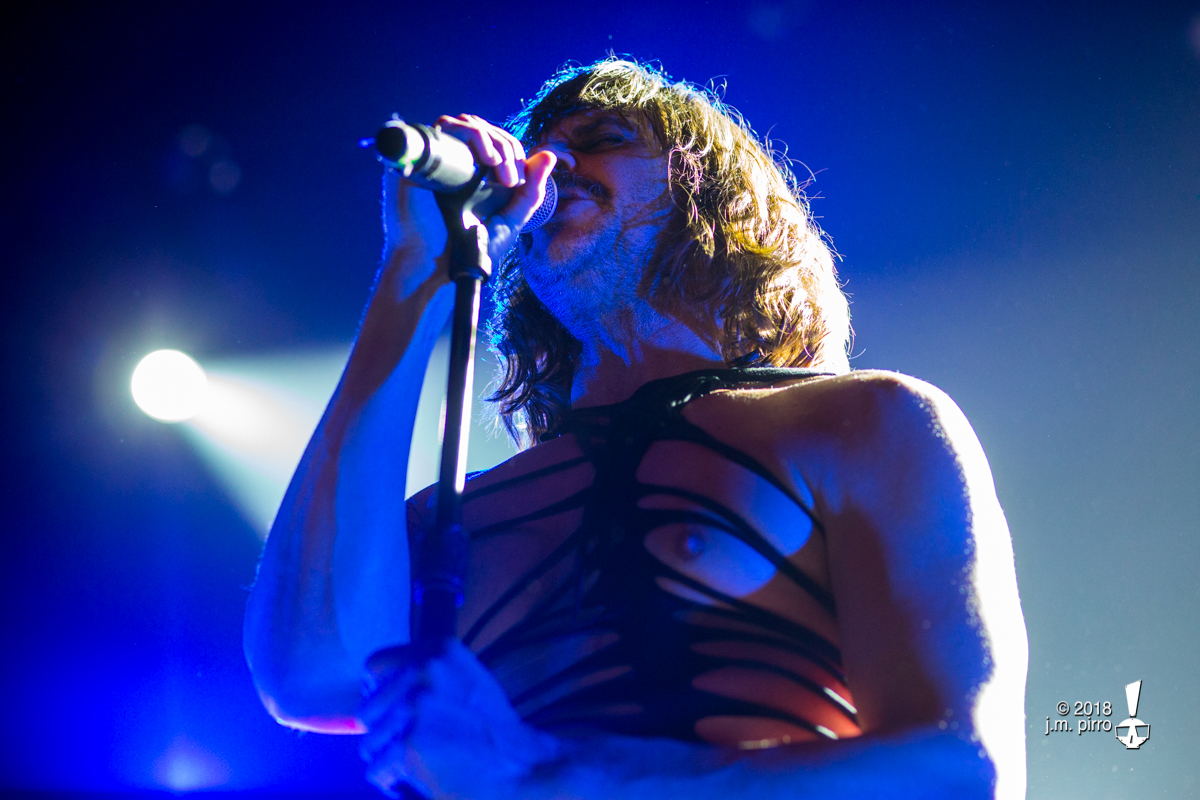 And then came “Butterscotch Goddamn.” The hot, sweaty, goodness caused the first of many wardrobe malfunctions. Saving his “finale ensemble for last” Spooner changed outfits side stage while dancers kept the room captivated. Spooner came back with two more Sir tracks, “Get It On” and “Discreet,” before playing fan-fav Odyssey track, “Get Confused.” 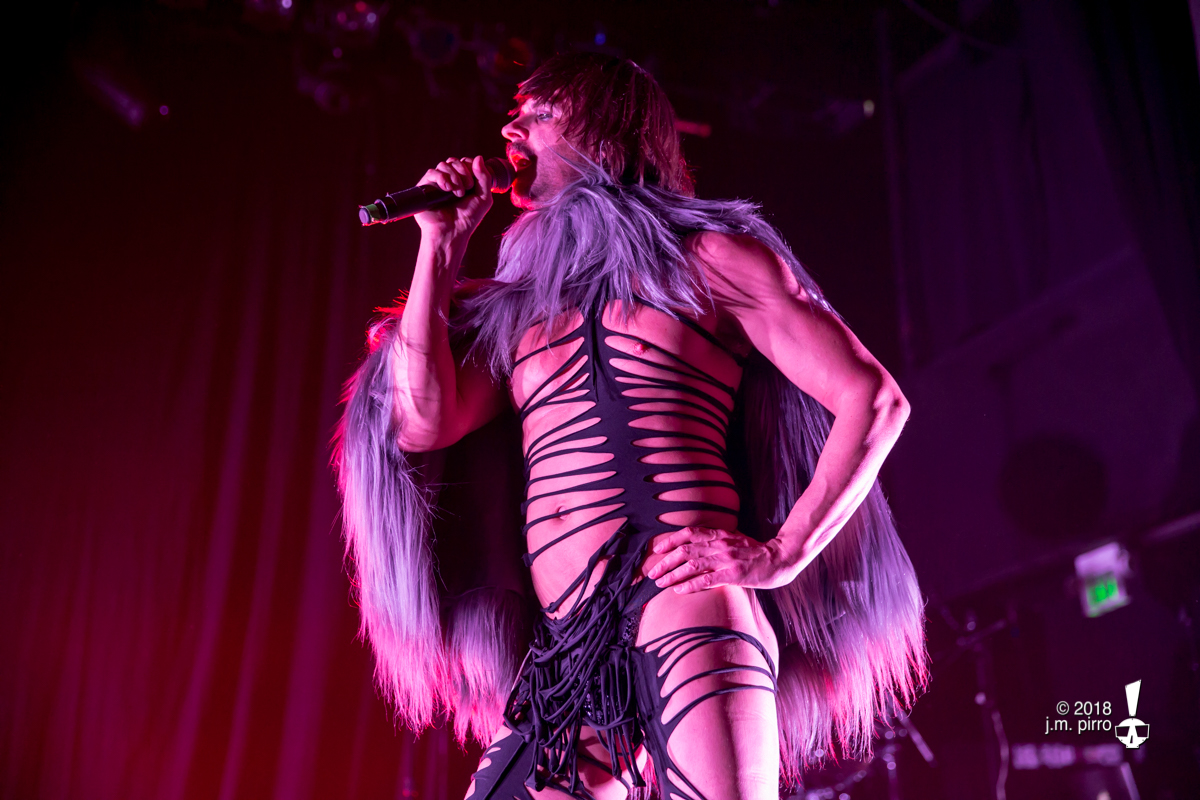 They played their sexiest new track, “Togetherness,” near the end of the night. After listening to a conversation between artist Jeff Koons and filmmaker John Waters, Spooner wrote the song around Koons’ quote: “The deeper you go, the darker it gets.” The rest of the lyrics were co-written by a stranger on a sex app. 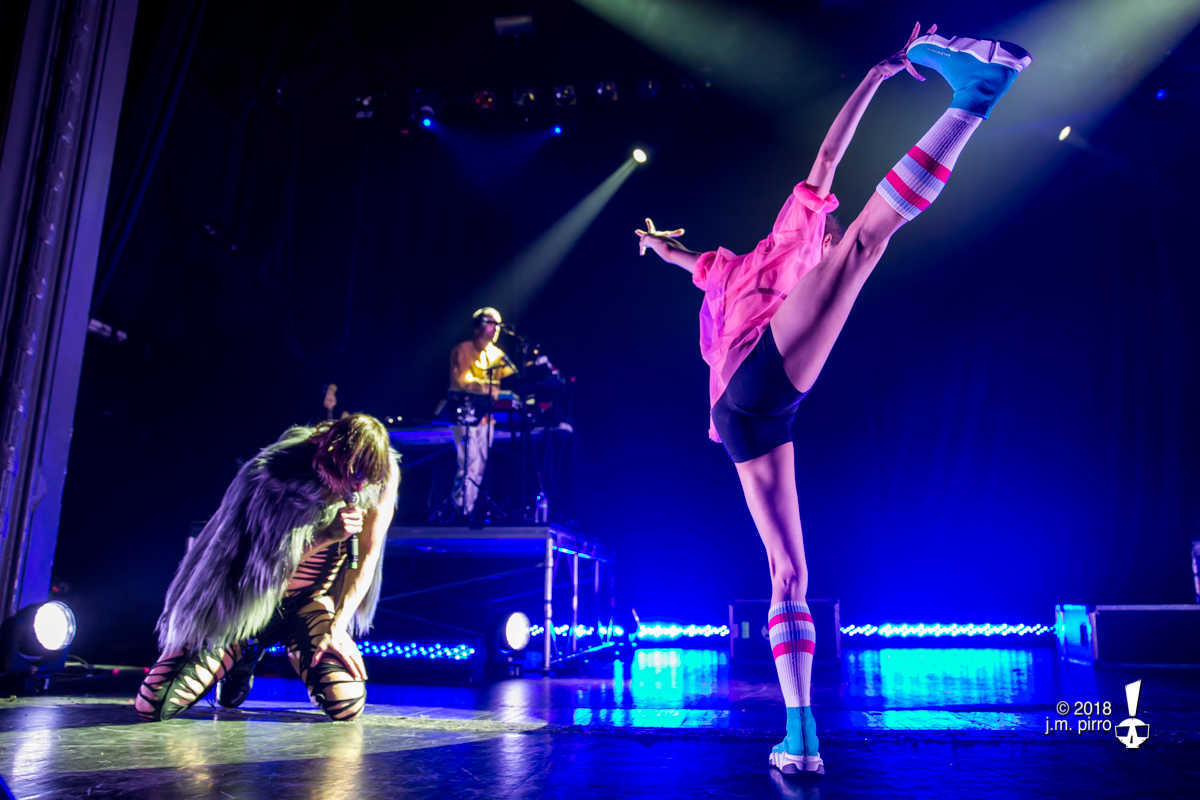 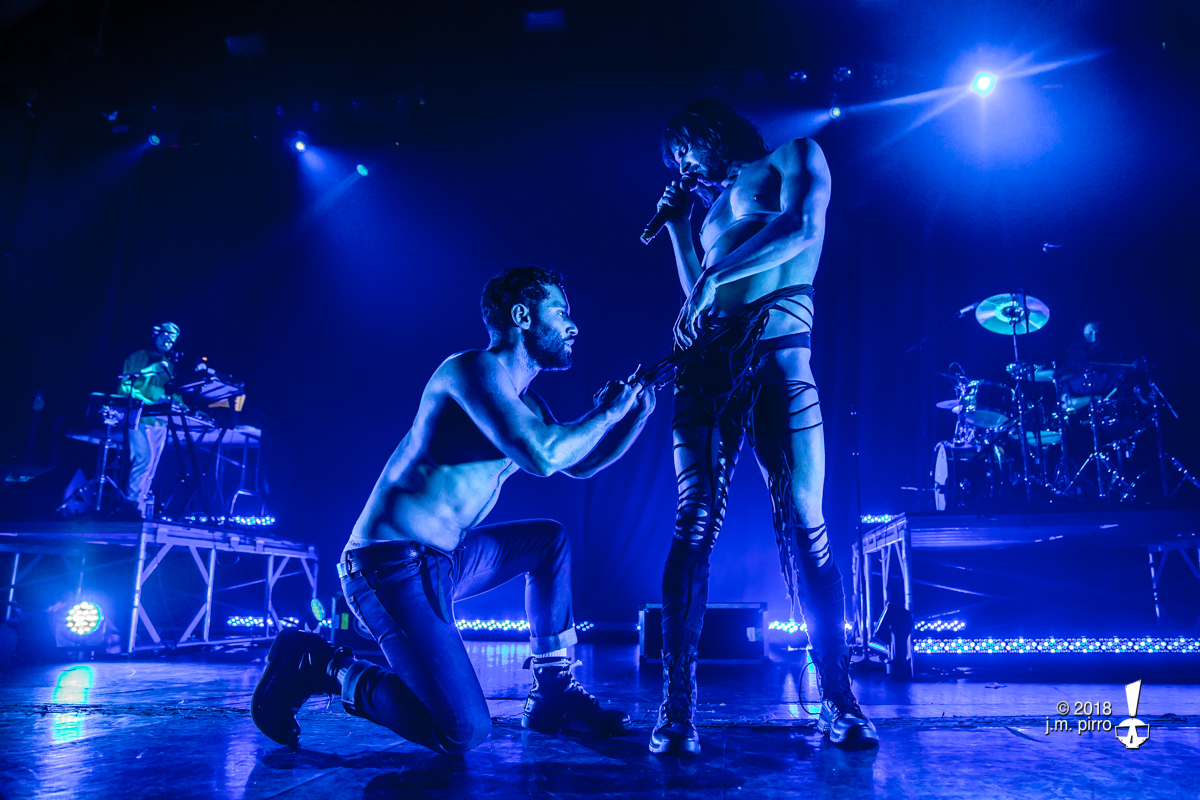 It takes a lot of guts to display your body, your life story, and your art before a crowd. A Fischerspooner performance is fun and tantalizing but it’s also brutally honest and raw. It’s about sex and sexuality. It’s also about love and pain. 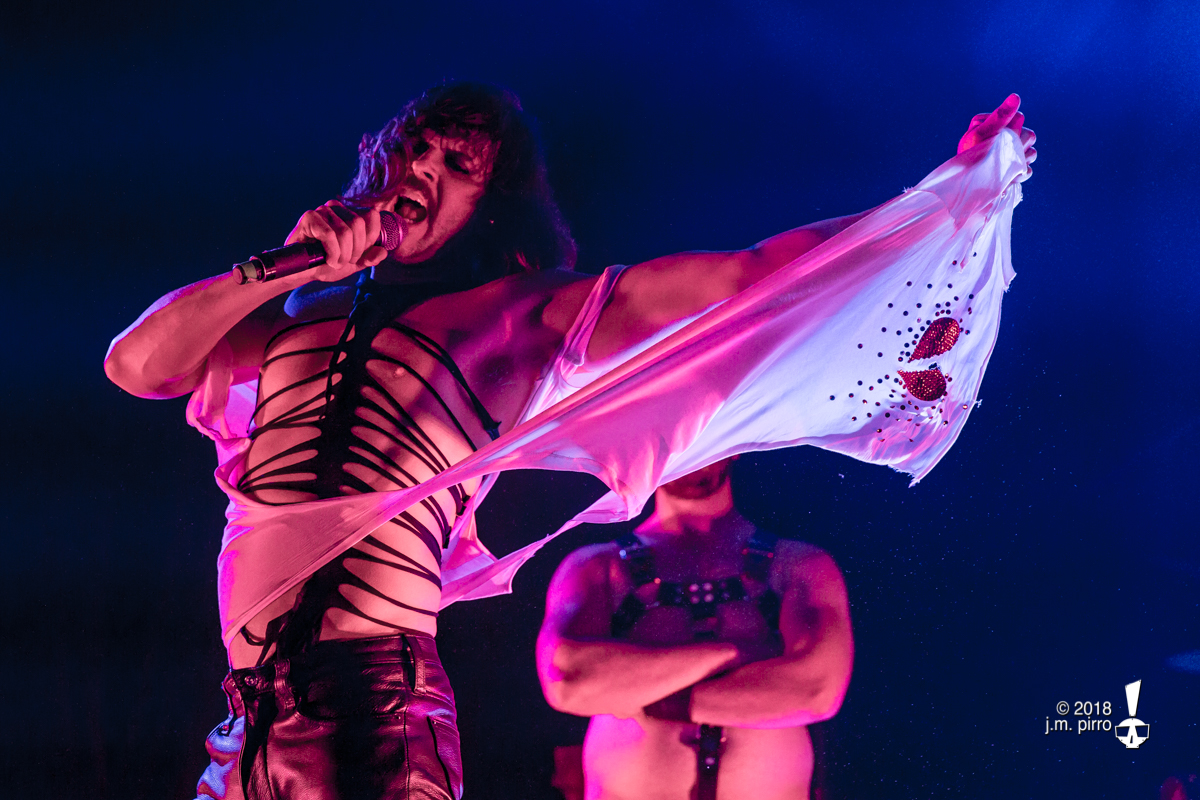 Fischerspooner played tracks from all four studio albums, including “We Are Electric” and “Supply and Demand” off 2009 record Entertainment. People came unhinged when they busted out a full rendition of “Emerge” off their debut album #1. But the most powerful visual of the night came at the end. 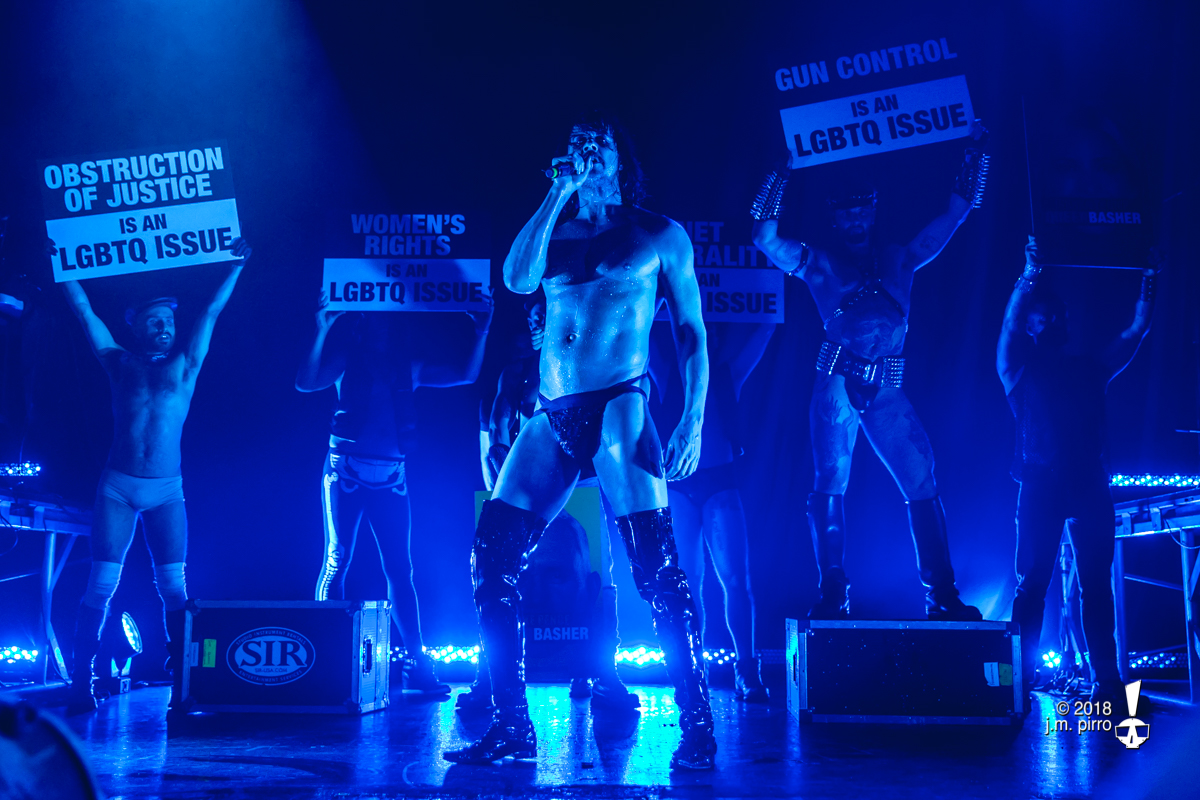 Closing with Sir track, “I Need Love,” the performance troupe filled the stage and held signs reading: “Mike Pence Queer Basher,” “Thank God for Abortion,” “Net Neutrality is an LGBTQ Issue,” “Gun Control is an LGBTQ Issue,” and “Women’s Rights is an LGBTQ Issue.” Jokingly calling the tour “Feelings,” Spooner reminded the room to “rise and resist” before disappearing into the darkness.

Setlist: Oh Rio I Strut I Stranger Strange I The 15th I TopBrazil I Emerge (just intro) I Never Win I Natural Disaster I Butterscotch Goddam I Get It On I Discreet I Get Confused I Togetherness I We Are Electric I Have Fun Tonight I Supply and Demand I Everything Is Just Alright I Emerge I I Need Love